I’m sure glad Connie is coming back from LA tonight (not half as glad as Neil I’m sure but then he’s one of those humans and he’s had her longer than Kara and I have had her so I guess that’s ok).

Anyhoo; last weekend before she left they wanted to do something. Neil discovered that she had never been down to Arlington Cemetery despite living in the DC area for 25 years. He’s run through there many times of course while working at the Pentagon and in Crystal City but decided to go visit with her. They drove down and parked at Fort Myer where you can take the back gate into the cemetery. 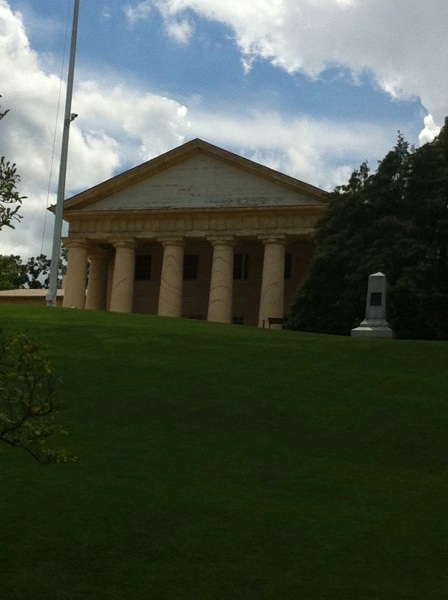 Tomb of the Unknowns

They wandered around for awhile and visited JFK’s grave site, wandered through Arlington House which was the home of Robert E Lee’s family, visited the Tomb of the Unknown Soldier then were wandering through the amphitheater behind the Tomb of the Unknowns when they spotted all these generals gathered around like they were waiting on somebody important. Pretty soon a couple of limos and a charter bus pulled up. Connie grabbed Neil and said “Isn’t that a basketball coach?” He took a look and sure enough it was Coach K from Duke who also coaches the USA Olympic team. They gathered near where the generals were standing and pretty soon the mens Olympic Basketball team members walked by; I recognize Kobe Bryant in the picture but did not recognize anybody else. Oh well, guess that’s what I  get for not following the NBA.

After that excitement; they headed on home so Connie could pack. Neil dropped her off at Dulles the next morning and she flew off for her convention. Neil stayed around the park the rest of the week; went running, went biking, had some wine coolers, went to the Irish Pub and cleaned up and stowed the rig some more. They’re still in the process of getting all moved in and getting everything in it’s place. He’s been kinda bored the last couple of days as it’s been raining just about nonstop since Thursday night. The area needs the rain but it does kinda put a damper on things. He said at least it was cool running yesterday and today; only about 75 instead of the 90’s it’s been earlier in the week.

That’s about all for now; they’re headed off tomorrow for Little Bennet Campground up near Damascus, MD for a week. They’ll have electric hookups but no water or sewer so they’ll have to be frugal for showering I guess.