Today dawned and turned out to be a picture perfect day. After breakfast and coffee we headed off to Mass in town and discovered that people here are really possessive about aisle seats in the church. The church has no side aisles and only a center aisle. We got there right before Mass started and the church appeared to be full with about 30 people standing in the back. We looked up the aisle anyway and found at least 10 pews with a couple sitting on the aisle end and not letting anyone else in. We had to go to 3 pews and tell them to move or let us in before one couple finally moved but even then they glared at us. We would have been happy to cross over and sit on the interior or sit on the aisle…we were amazed how rude the parishioners here are. Oh well, that’s the way it goes I guess. After church we stopped by Starbucks for a couple of hours for internet and a cup of coffee for Connie then came home for lunch.

After a bike ride for Neil…he went about 9 or 10 miles but it was down to the Bow River Falls in town so it was a nice 500 feet or so climb back up the hill to the campground…and he got stuck in the middle of the Banff Classic bike race for a bit; and then some lunch we decided to just take a drive today and see some of the sights without hiking very far. We have planned a 4 mile hike up to the Lake Agnes Tea House tomorrow  but it’s a thousand feet climb up and back down so it will be a pretty decent hike…so we decided to just take it easy today and headed off for a drive of about 20 miles total to visit 3 lakes; Cascade, Johnson, and Minnewanka…the three get progressively larger and Minnewanka is the largest lake in Canada.

Our first stop at Cascade…was a complete bust mostly because there wasn’t any water in the lake. A few small puddles here and there but even if it had been full it was probably only 2 or 3 acres (maybe 8 or 10 typical house lot sized) total. We parked, walked down the path to the lake, turned around and left and headed for Johnson Lake.

Shortly after getting back on the main road toward Johnson Lake we did spot a nice waterfall coming off the side of Mount Norquay on the north side of Canada HIghwayt 1…and snapped this shot. The trees at the base of the mountain are maybe 300 yards from where we were parked and the mountain rises immediately past there about 4500 feet higher than the parking area and it’s maybe 2 miles away to the summit. Here are both a wide and closer view. 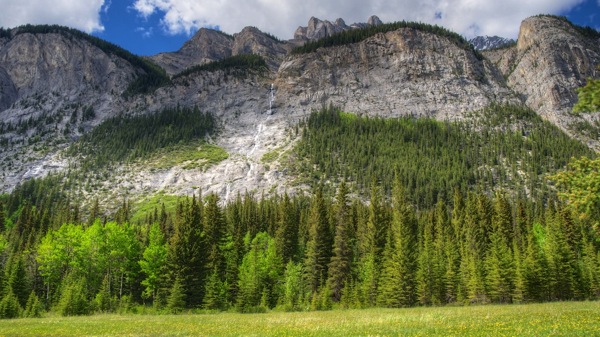 Continuing along we arrived at Johnson Lake where we snapped a photo of a couple of guys fly fishing for reader Ron as well as a nice vista view of Lake Johnson looking east toward the peaks. On the way out of the side road to the lake we stopped by a small hydro electric dam and grabbed a photo of what a local told us was a Squawfish which is apparently a member of the shark family. Sorry about the photo quality; Neil was shooting though about 3 feet of water with some sort of pond scum on the surface so it was the best he could do. We also passed by the far end of Johnson Lake and got another shot looking back toward the west as well as a nicely framed one through the trees. 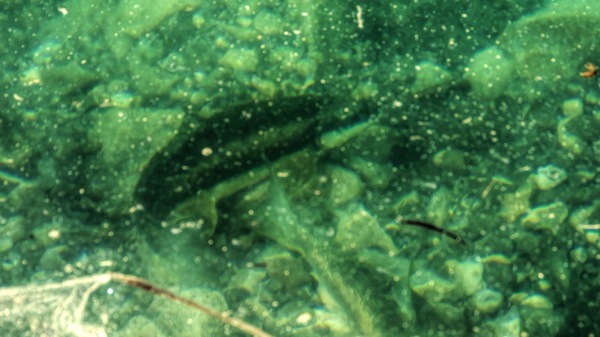 As we headed towards Lake Minnewanka we ran into a sheep jam where we spotted a male Bighorn Sheep’s harem, a close up of what appears to be the alpha female, and then a shot of the male a little up the road. There was a youngster as well but we didn’t get a good shot of it without a car in the photo. 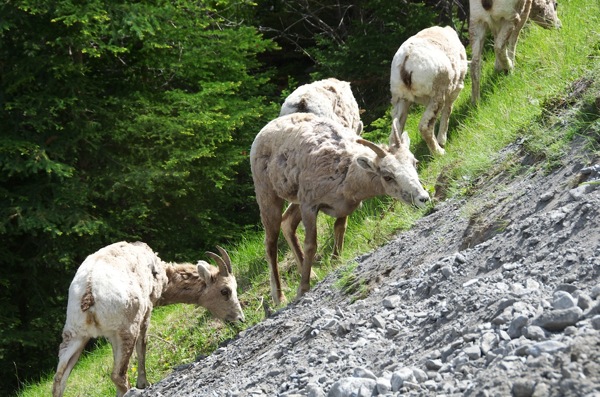 We arrived at Lake Minnewanka and got a lot of really decent shots of the scenery around the lake…including one wide panorama shot and one of Connie resting on a log while Neil was off down at the shore getting the photos…she had street shoes on instead of sneakers and decided the shore was too rocky to walk across in them. 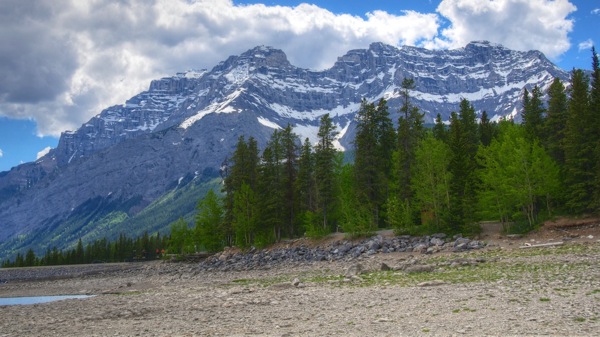 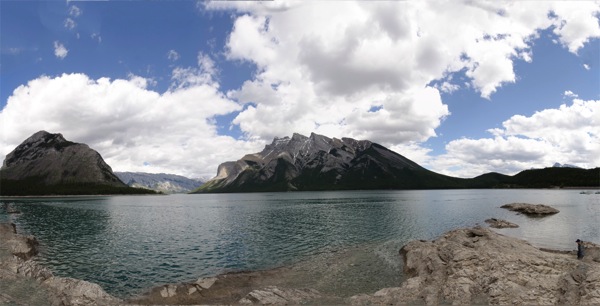 With that we hopped back in the car and headed home. Right before we got back to the campground we spotted a local piece of scenery here in Banff…it’s a couple of hoodoos which are spires of harder rock that were originally surrounded by softer rock which eroded away over the millennia leaving just the funny shaped tower. While he was out there; Neil also grabbed a few shots of the Bow Valley. That’s the Bow River running through the bottom of it and Banff is at the far end of the valley; the hotel you can see in the distance in some of the pictures is the famous Banff Fairmont Hotel…it’ quite nice. We might have to run over and have afternoon tea before we leave. We also spotted our last wildlife of the day; a Canadian Ground Squirrel. 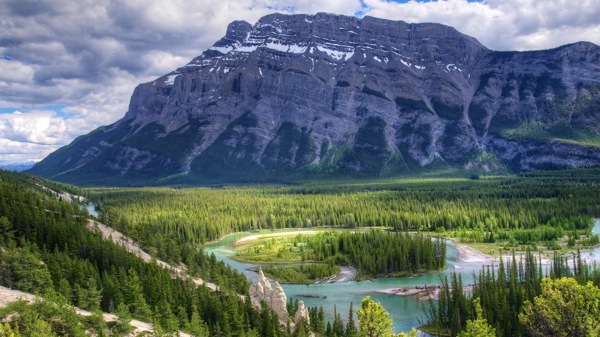 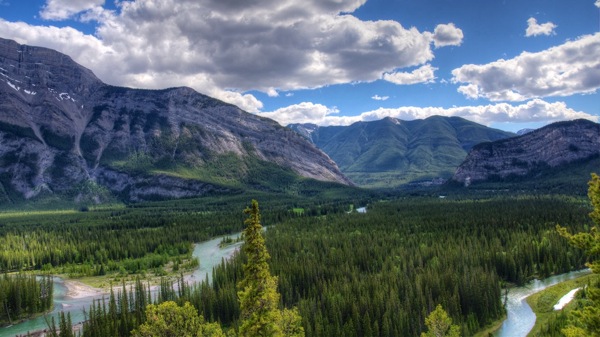 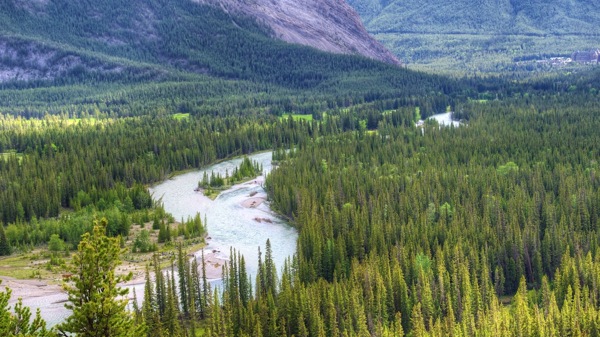 And finally; a shot of our view from site 841 in Tunnel Mountain Campground…beautiful isn’t it?? 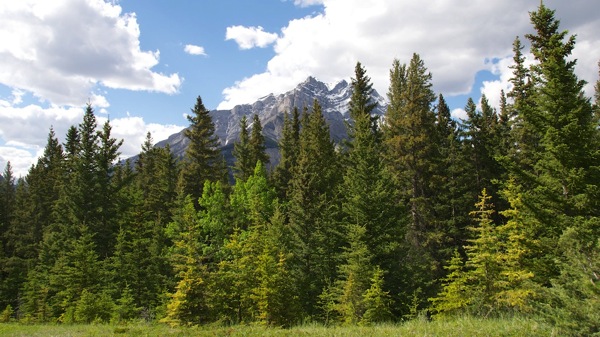 We’ve decided that overall we think the views here in Banff are better than those up in Jasper…but mostly they’re a different type of view. Up in Jasper the absolute magnitude of the valley to peak rise is larger than it is in Banff; but in Banff the rises occur over much less horizontal distance making the ridges steeper. In addition; the peaks are a lot closer than they are up in Jasper…up there there might be a rise of 5000 feet to a ridge 6 or 8 miles away where as down here the rise might only be 3500 feet but the peak is within 2 miles of you so the apparent steepness and rise is greater. This leads to what we believe are more impressive views; a lot of the peaks look like near vertical rises. The peaks down here also don’t have (generally) as much tree cover as farther north; with the steeper slopes and solid rock vice rock covered with dirt landscape there are a lot more sheer, bare ridges than farther north. There’s also a lot less snow on the sides of the peak…due primarily to them being steeper so the snow doesn’t stick. You really can’t go wrong with either though…the people up in Jasper were more friendly and the town is much smaller with more of a ski bum small town feel than you get here. Banff certainly isn’t metropolitan of course; but it’s about twice as large as Jasper and just has a lot greater selection of everything…pubs, groceries, coffee cafes, and pretty much everything else. Banff also has a lot more hills and grades in town where as Jasper is small enough that the whole town sits on the valley floor…Banff is larger and the valley is narrower so the town has spread a lot onto the lower slopes of the various peaks around the valley.

Dinner was chicken with some yummy garlic, basil cream sauce and mashed taters. Today’s planned hike at Lake Louise for some photos (you’ll recognize a lot of the photos we take there as several lakes in the area are particularly famous views) and a hike up to the Lake Agnes Tea House for lunch…was postponed until Tuesday since Connie didn’t feel well today. It rained pretty hard during the time we woulda been hiking anyway so it’s probably for the best.