Today was a really good day. After our work yesterday we were ready for some fun…so we got up about 0600 and had breakfast and coffee. Our goal was to get in our hike (a) before it got hot and (b) before the crowds, We were mostly successful…when we got out to our first stop in the park the small main lot was full but there was still plenty of overflow parking along the roadside.

Our first stop was at the Devil’s Garden area of the park; this is just about as far from the entrance at the south end as you can get…it’s about 12 miles into the 14 mile across park. On the way up we spotted a few places we wanted to visit on the way out…but our plan was to avoid the crowds as much as possible. We got parked and headed out on the Devil’s Garden Trail and shortly came to our first glimpse of one of the stone arches for which the park is known. These arches were formed long ago by the formation of long deep cracks in the stone with two parallel cracks generating a fin shaped projection of stone between them. Over the millennia the racks expanded due to erosion so that the fin was left standing alone and then a combination of erosion and water freezing in cracks breaking off pieces of rock eventually carved a hole through the fin resulting in the arches we see today.

About a quarter mile into the hike we took a short side trail to the Tunnel Arch and Pine Tree Arch. Tunnel Arch is about 70 feet or so across and tall and is different from most arches in that the base fin it is in was much thicker causing more of a tunnel effect than a window or door effect. You can only get to within 300 yards or so from Tunnel as it’s much higher up the hillside than the hiking path. One must stay on the path and not wander generally about the area as the ground cover is very easily damaged and takes many years to recover from casual foot traffic.

What struck us most on this hike was the expansiveness of the park…everything is literally huge chunks of stone hundreds of feet high and you can easily see for 20 or 30 miles in the clear and thin air here at 5,500 feet. 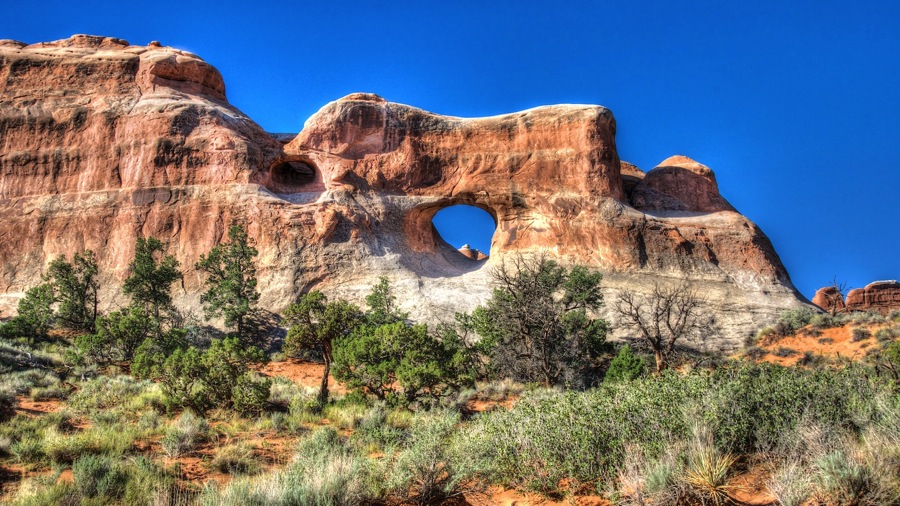 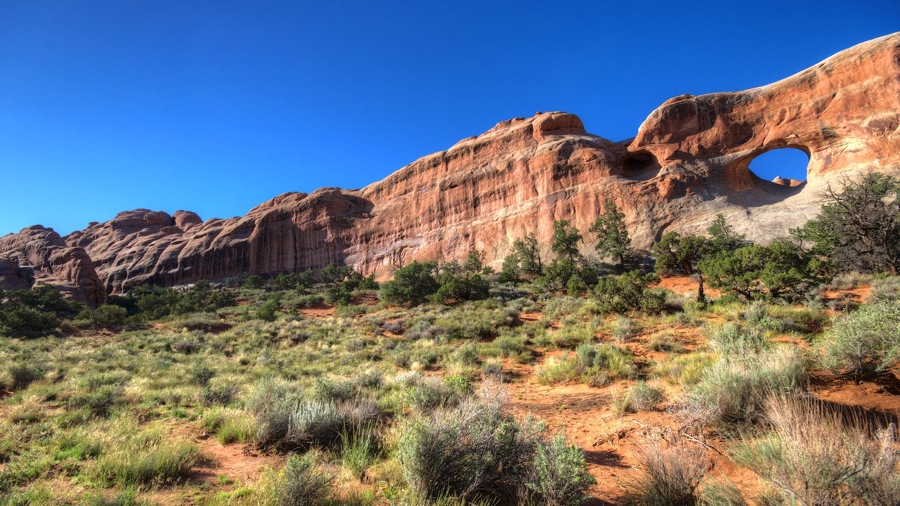 We continued on down the side trail and shortly came across Pine Tree Arch…I’ll let you figure out how it got it’s name. This arch is maybe 60 feet or so high and wide and is right next to the trail…we actually walked through it to the other side to get a couple of shots.

Yup, those pine trees are directly under the arch…the second shot is from the far side after we walked through it. 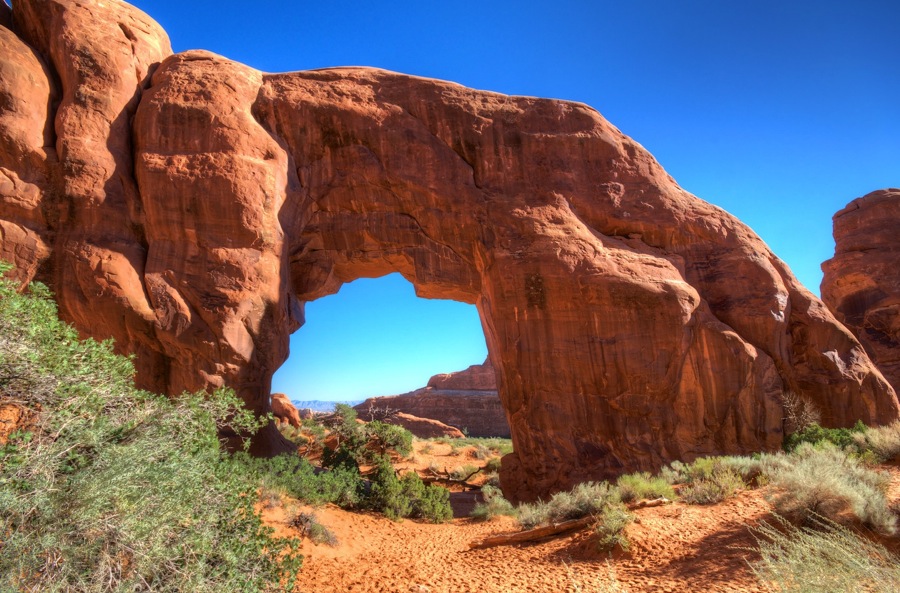 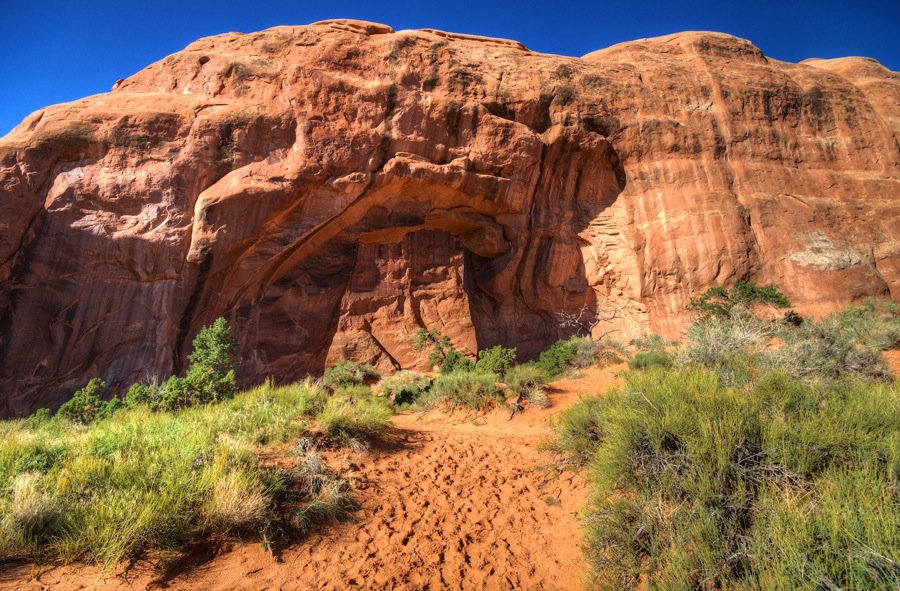 After these shots we headed back out the spur trail (to the right of the arch in the first photo above and once we regained the main trail continued on towards Landscape Arch. On the way we started hearing this strange Indian sounding flute music and eventually came out at the Landscape Arch viewpoint to find an elderly gentlemen playing the tunes. We were not able to get a movie of him playing or a recording but we were pretty much alone on the trail at this point and hearing the music echoing through the canyons in the quiet early morning was beautiful.

Once we arrived at Landscape Arch we were suitably impressed. This is the largest arch in the park at almost 300 feet long and about 200 feet high. You used to be able to walk out and go underneath it but in the early 1990s a large piece of it fell off from underneath the right hand end. After that it has continued to shed small stones over the intervening years so it is now off limits to people. Good thing; if it collapsed on you it would definitely leave a mark. Landscape is the arch in the front; the second one behind it is Partition Arch and the third one you can see behind it in the second photo is Navajo Arch. The fourth arch you can see on the right of the second photo appears to be unnamed…but there are over 2,000 arches in the park so I guess they didn’t name all of them. We thought that Landscape was the best arch we saw today. We also decided to get the obligatory tourist shot standing in front of the arch…sort of a “We were there.” thing. An obliging fellow hiker took this for us. 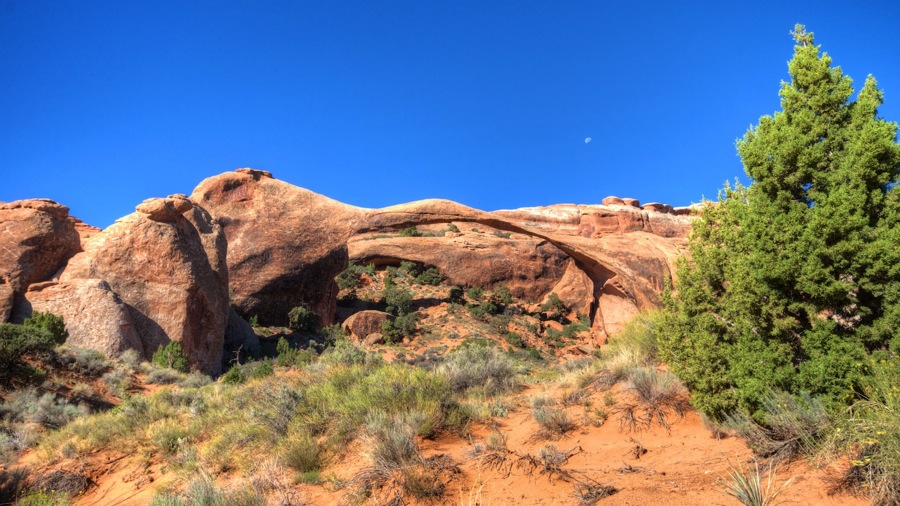 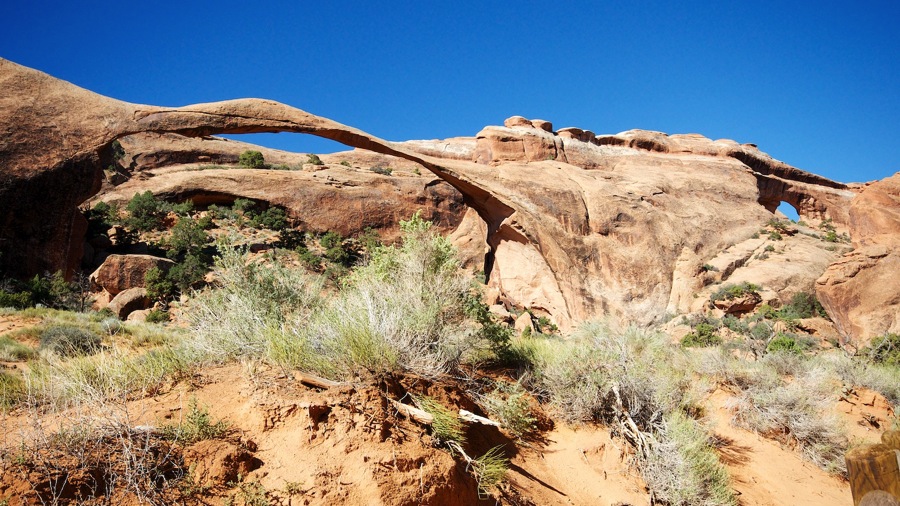 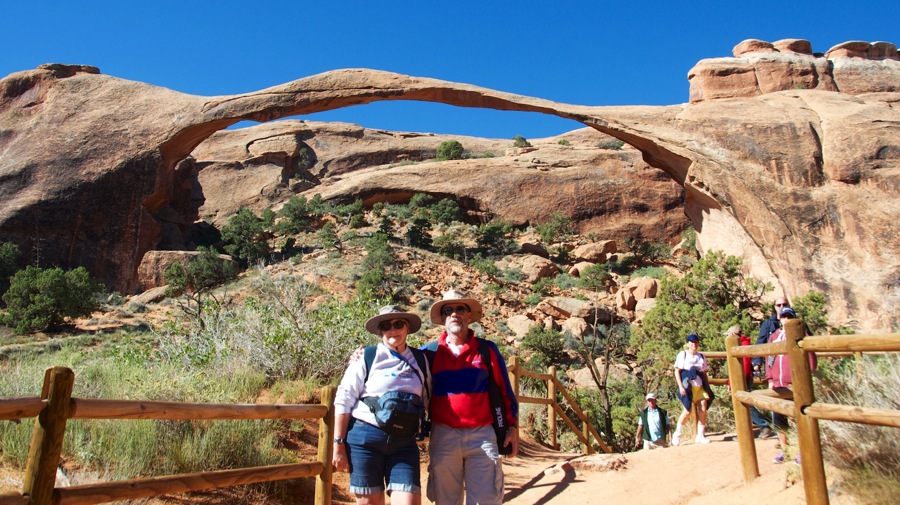 On the way out to Landscape Neil shot a couple of panorama shots looking to both sides of the hiking path…left side then right side.

After the Landscape Arch viewpoint the trail went pretty steeply upwards for a couple hundred yards. You had to hike up a piece of one of the fins about 10 feet wide with 30 foot drops on both sides…and you had to sort of shinny around several rock projections on sloping footing. Connie decided her vertigo wouldn’t allow her to get up and down safely so she stayed at the bottom while Neil went up. He didn’t go all the way out to the Double O Arch that was the terminus of the trail but did go far enough to get a shot of it.

Neil spotted this chipmunk and also got a slightly different view of Landscape…you can really see how thin the arch is in this view. 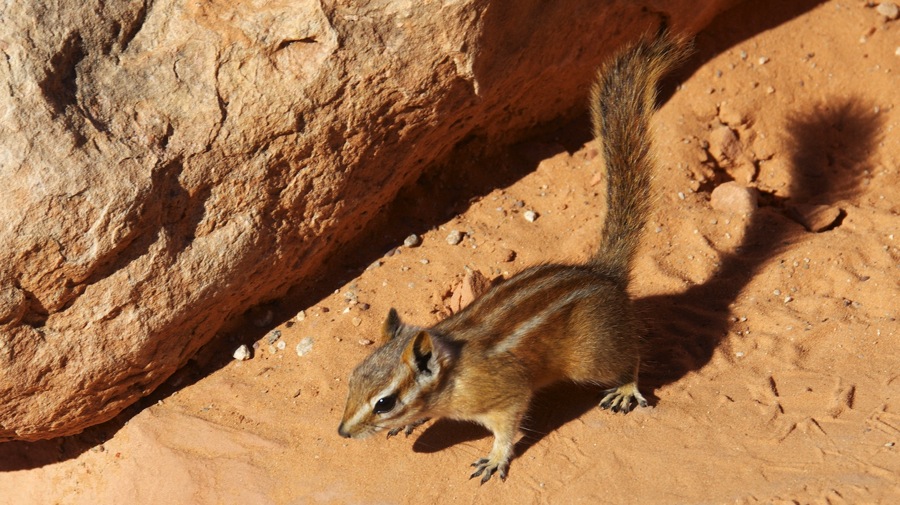 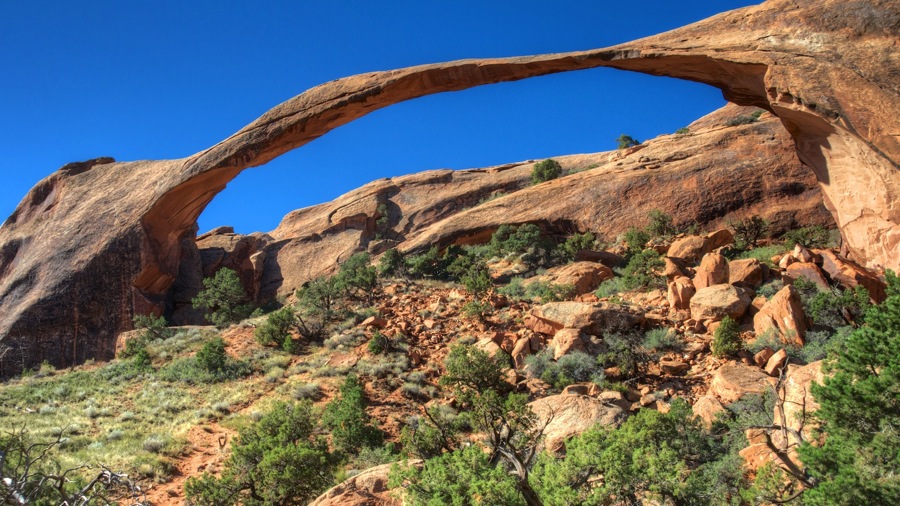 Here’s a shot of the Double O Arch from afar…it was another 3/4 of a mile out there from the top of the steep section; the arch is over on the right side of the photo but you really can’t see it very well in this shot. 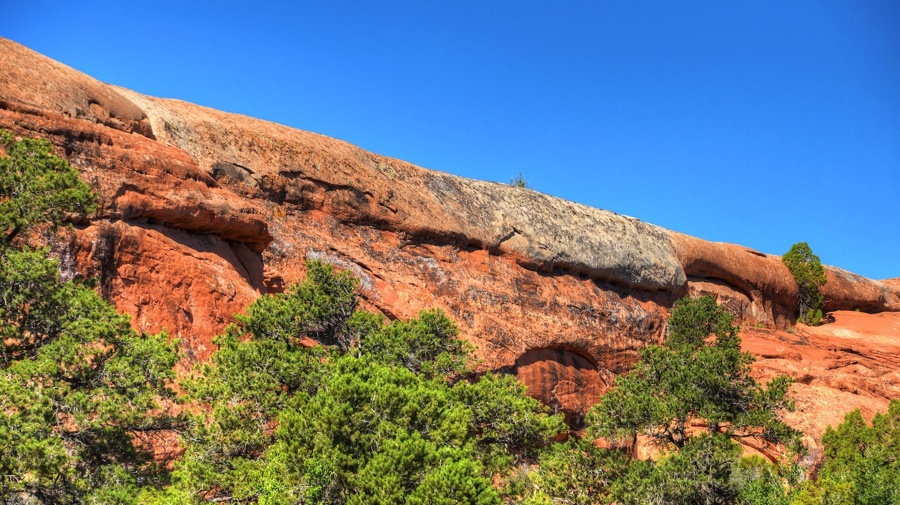 Neil crept out on the end of the fin and took a shot back the direction we came from…it wasn’t nearly as dangerous as it looks. From the back side where he came up the fin it was pretty flat and got down to maybe 15 feet wide…albeit with a couple of hundred foot drop on the other three sides. Connie is standing (but you can’t really see her) just below center in this photo; I’ll put in one down a bit looking back up from where she was to where Neil was sitting for this shot. 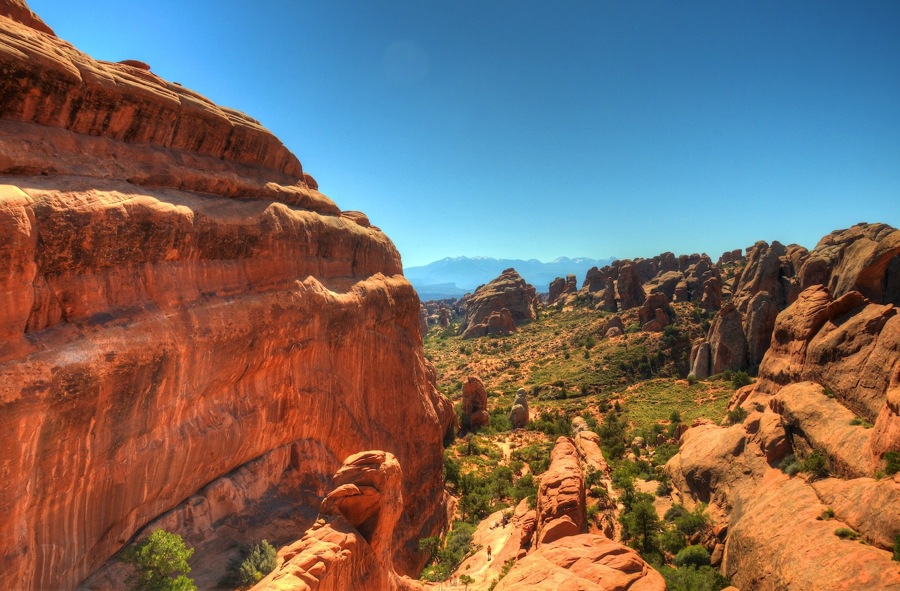 Here’s a dead tree shot for our friend Howard Payne of RV-Dreams as well as one looking back up from where Connie was in the shot above to where Neil was sitting. He was in just about the same location as the single guy you can see on top of the rock just above and to the left of the center of the shot. The steep section that deterred Connie is the one with all the people going up it in the second shot. 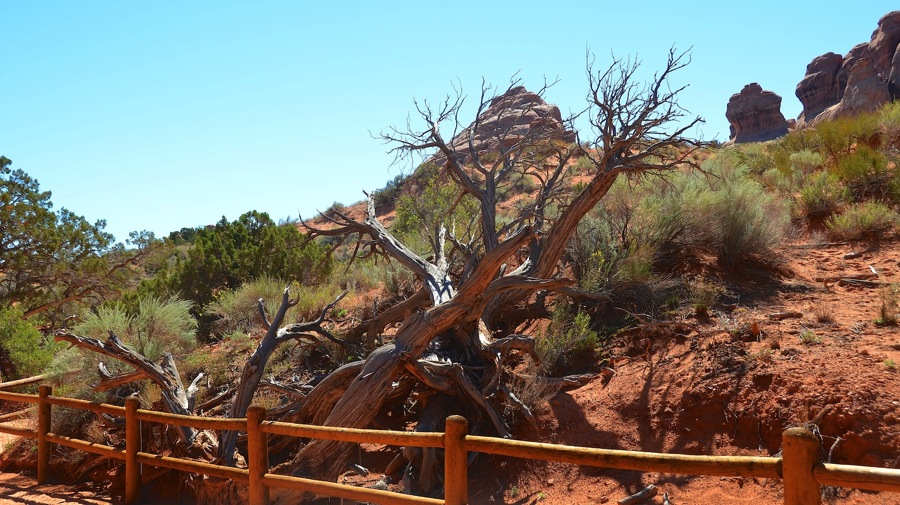 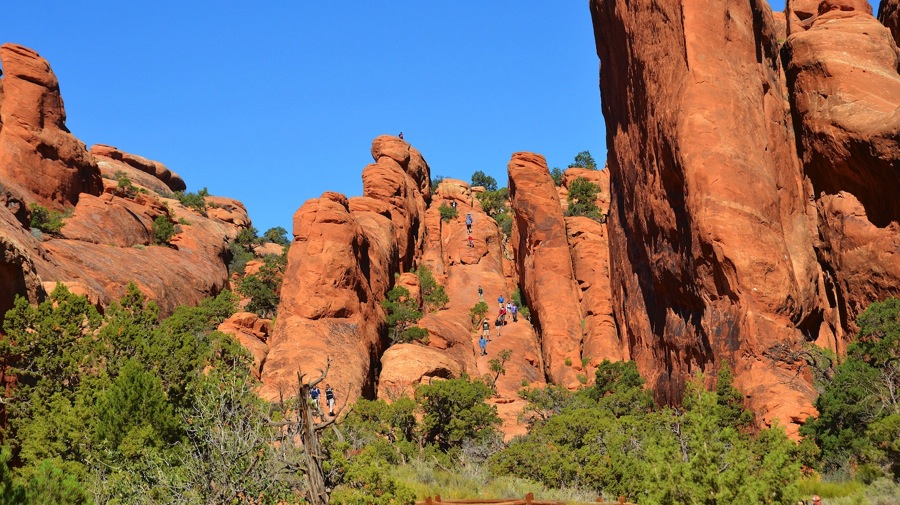 We got back to the car and had a sandwich for lunch then headed generally home with some planned stops for more short hikes and picture taking. Next up was the Sand Dune Arch which I guess was named because it’s pretty sandy getting up to the arch. This one is about 50 feet wide and 30 tall and again you could walk up and underneath it. After squeezing through this 4 foot wide slot canyon for about 150 feet we trudged a couple hundred yards through the sand and got a shot of the arch. There is a lot of iron in the stone in this area of the park which causes the reddish hue in the shots. 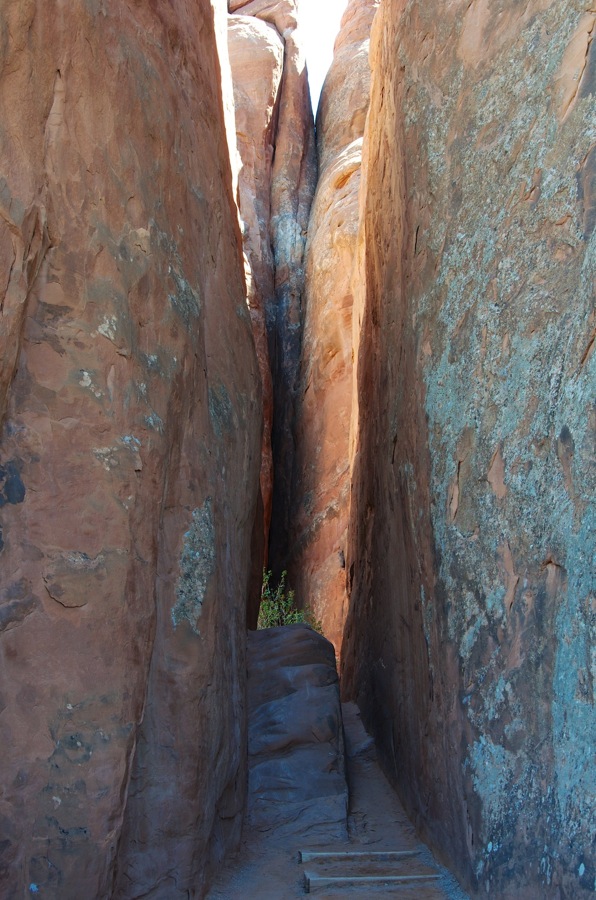 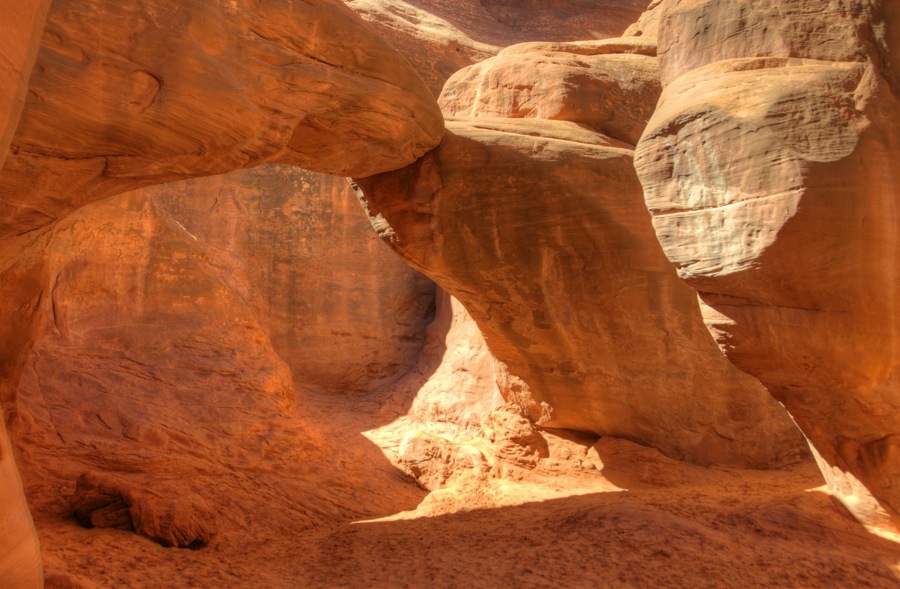 Continuing on south through the park we spotted another unnamed arch next to the road. 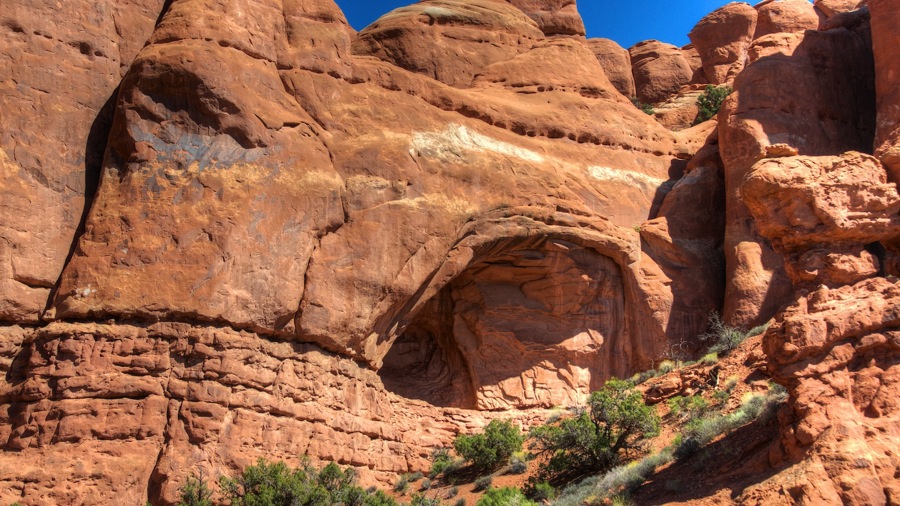 Our next stop was the Fiery Furnace Overlook…this is named because of the very hot conditions in this complex maze series of deep, narrow slot canyons. The only way to get into the area is either have a back country permit or else go on a ranger guided hike so you don’t get lost. Neil got a pano shot of the slot canyon area…this is about a 140 degree wide view.

Next up was Delicate Arch. This is supposedly the most famous and most photographed arch in the world. The road out there was closed earlier in the week due to some flash flooding which was finally cleaned up today so we were able to get to one of two viewpoints to see the arch. The second is a longer hike and we were tired so we’ll grab that one later in the week I guess. I hope it looks better up close…but we were underwhelmed by it from a distance today. 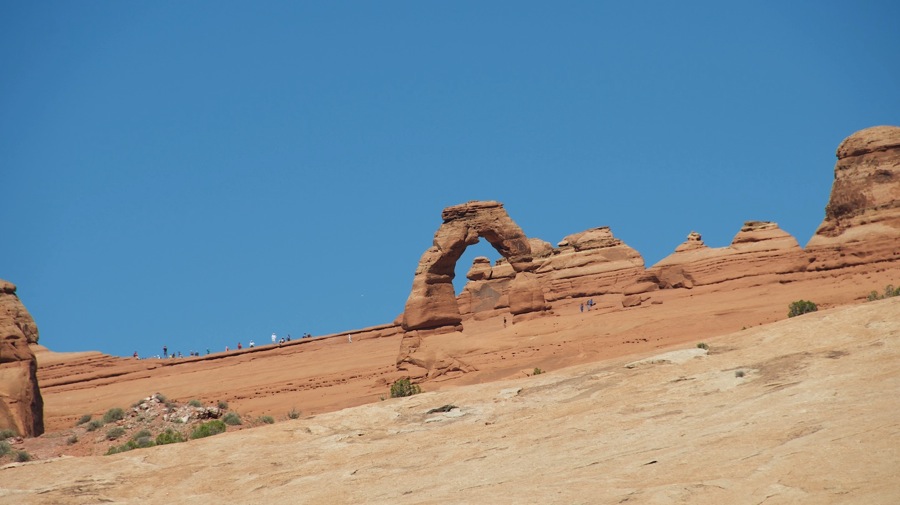 Next up was the second most famous landmark in the park…Balanced Rock; and right next to it a formation that Connie named Butt Cheeks Rock. Balanced Rock is about 200 feet tall with the skinny portion part way up being maybe 15 or 20 feet thick…Neil was surprised it hasn’t fallen over yet as it’s leaning 5 or 6 degrees and from the side most of the mass of the upper section is cantilevered out past the left side of the lower section. 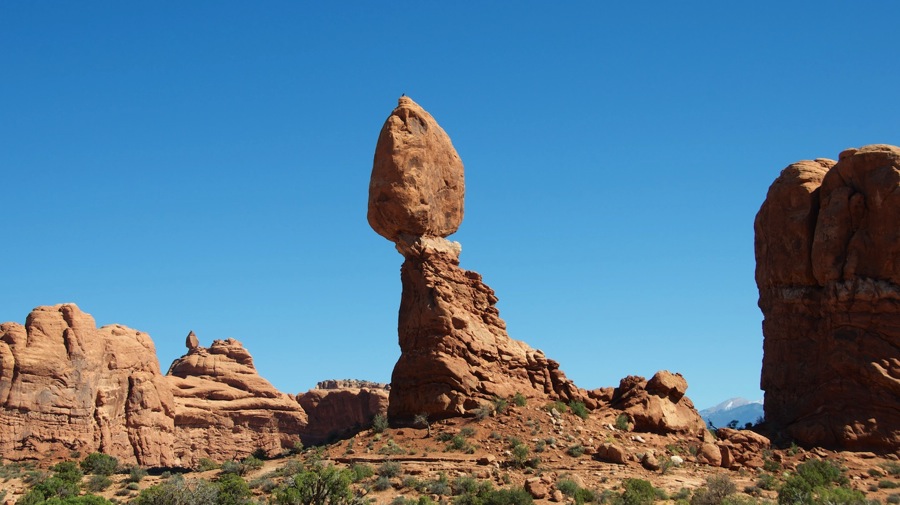 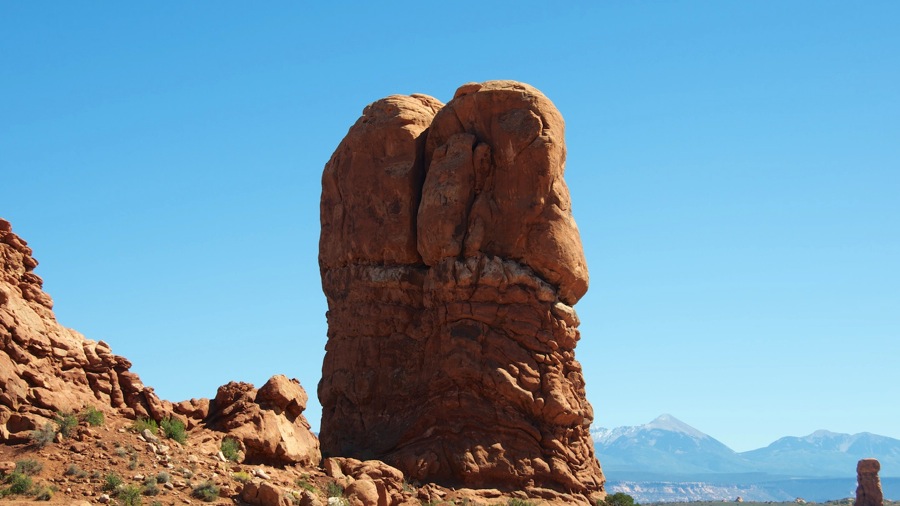 Neil spotted this rock a bit later…strangely similar in shape to those bushes we saw up in Graham a couple weeks back…he named it Richard Rock. Looks like a 200 foot tall phallic symbol he thinks. 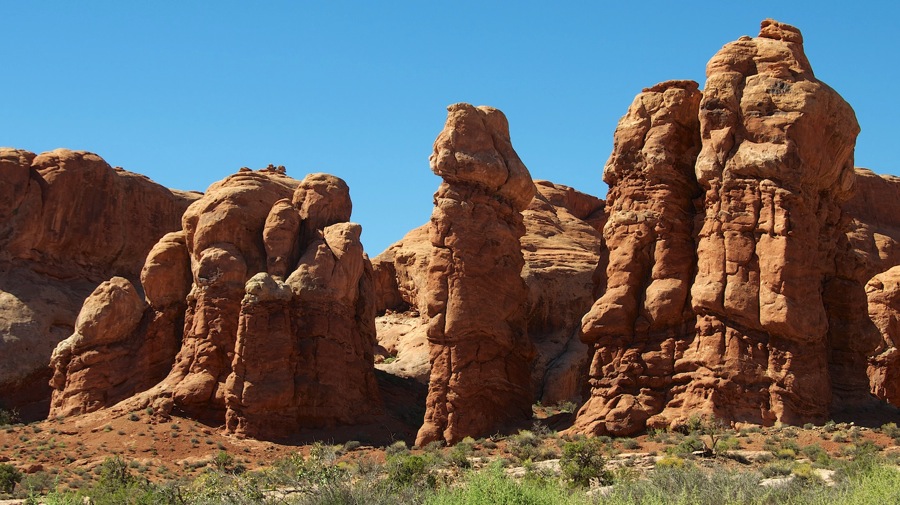 With that we thought we were done…but when we got down by the Organ Viewpoint Neil decided that since it was mid afternoon and the light was perfect we stopped there. The light won’t be nearly as flattering of these formations when we are there later in the week as it will likely be morning then. From left to right we have The Three Gossips, Sheep Rock, Organ Rock with the Tower of Babel, Elephant Rock, and a couple of other unnamed formations. These rocks are massive; The Gossips, Organ, and Tower of Babel are most of 1,000 feet tall above the surrounding plain and are solid rock. You can also see Balanced Rock and the Windows Arches from here but we’ll be closer later so I’m not going to post those pictures. 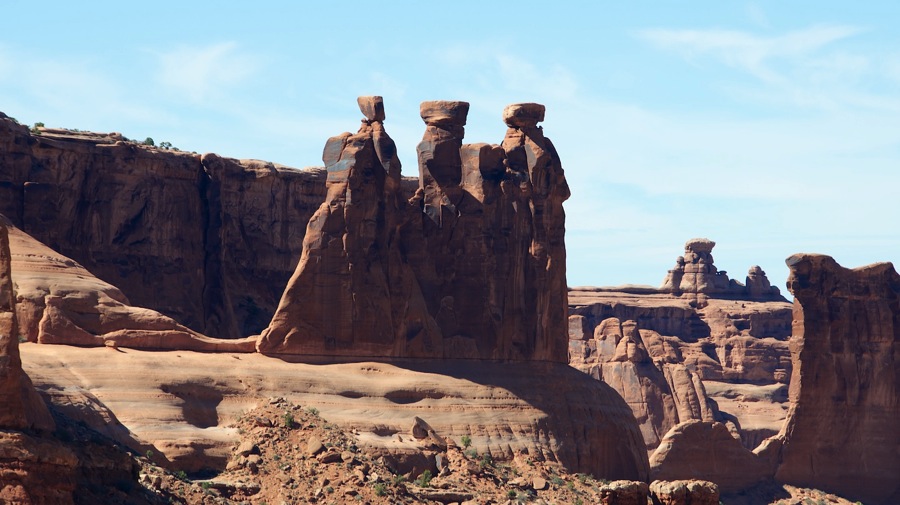 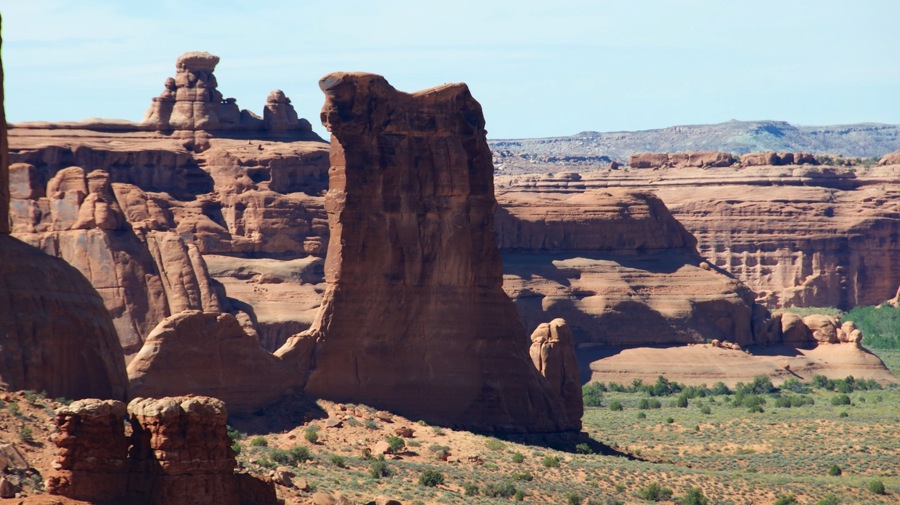 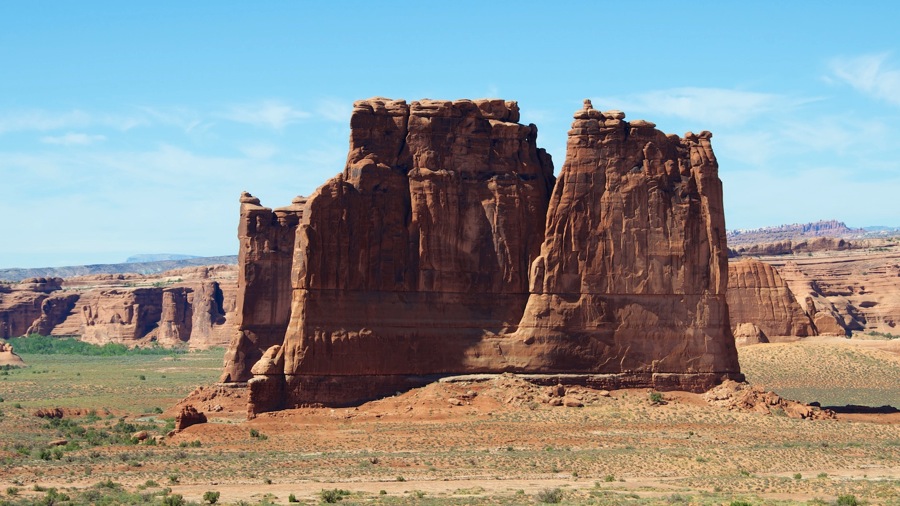 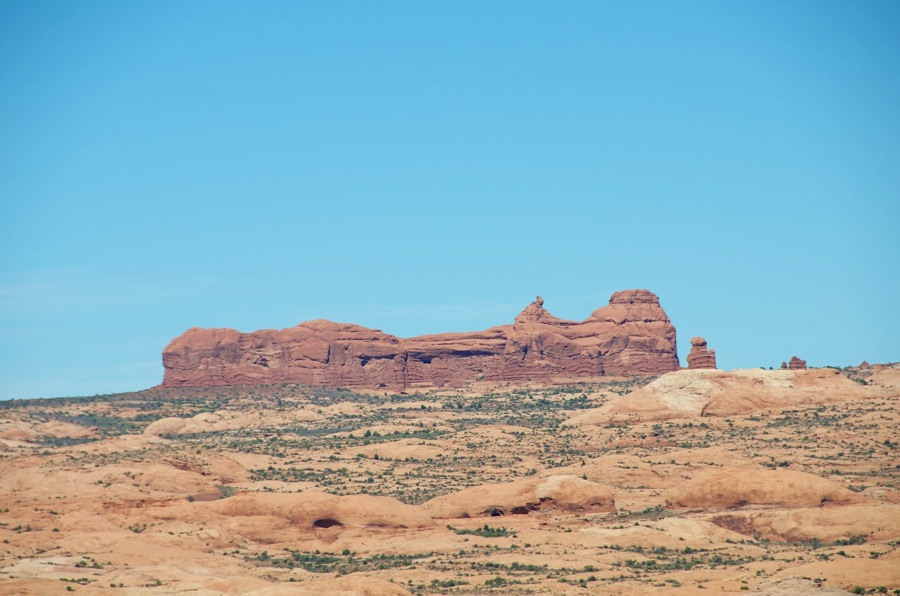 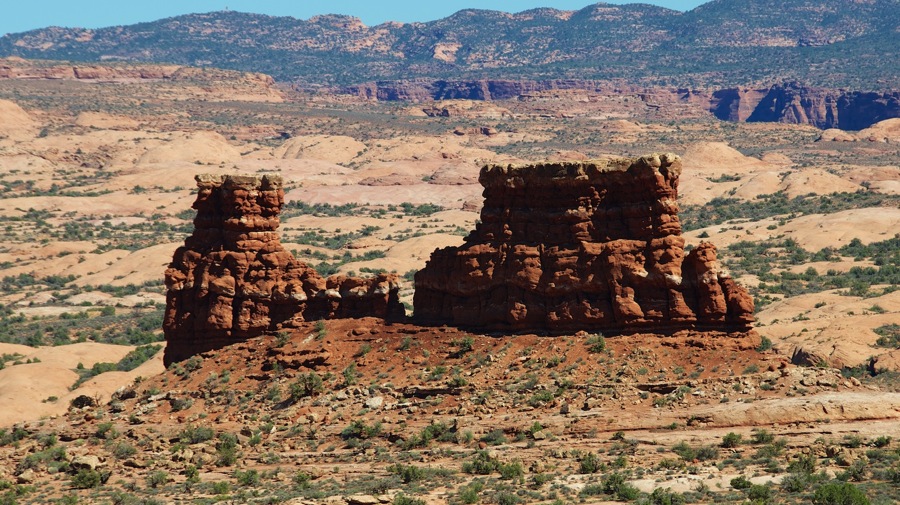 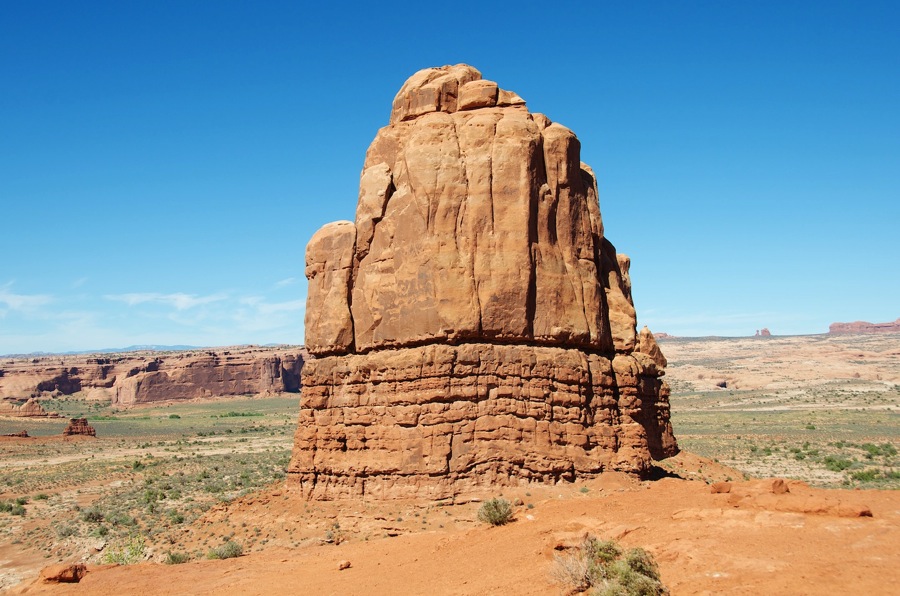 With that our day was done…it was 1500 and we had been on the go hiking and walking about since 0830 and we were tired. We exited the park, picked up a few groceries we needed, gassed up the car for tomorrow’s trip down to the southern Needles portion of Canyonland National Park and came home. We decided to skip a shower and just hopped in the hot tub and pool and hot tub and pool and etc until we were bleached clean. Came home, had a beer and left over spaghetti from last night and called it a day.