Lazy Days on the Waterfront

I would like to tell you about all the super interesting things we’ve done this week…but the list of super interesting things contains…nutten. All we’ve done mostly is laze around. Connie worked a little, Neil went on a couple of bike rides, we sat in the zero gravity chairs outside and listened to podcasts in the shade, we went to the Tiki Bar in the evenings, and ate easy to prepare stuff.

So far this week for dinner we’ve had Pork Picata, a steak, some chicken that a local guy named Jason grilled outside the bar, and last night we just grazed on whatever we could find in the fridge. Tonight we’re going whole hog since it’s Halloween and will probably have a pizza unless we decide to hit the raw bar downtown.

The Tiki Bar is closed today since Pat and Cindy (the owners of the Low Key Hideaway) are going downtown to visit friends and hand out candy in their neighborhood…so we’ll be on our own. Neil settled up our tab with the bar last night and today he’ll probably run down to the library to get some internet and will fill BAT with fuel for tomorrow’s journey south. We’ve got 249 miles to go tomorrow…23 miles north on FL 24 to the intersection with US-98 then about 50 miles down 98 until it runs into I-75 then the remainder straight down 75. It’s about a mile and a half from the exit to the park and we’ll be in site 101 at Seminole Campground again. Neil sent Bryan the address yesterday and he’s going to get us a package of mail off. We’ll probably rest over the weekend then next week will start in on our list of things to do…we’ve got some periodic maintenance on the house to get done and a list of minor things to fix or order or replace. Maybe later on next week we’ll get the kayak wet or head out for a hike…we were going to paddle this week but the locals recommended against it in an inflatable since then oyster shells would rip it whenever you touched the bottom.

We did have a pretty nice sunset last night and also spotted first a pair of Roseate Spoonbills out on the mudflats at low tide…then we spotted a pair of Ospreys over on the nesting platform that Pat built. It’s sticking out of the boat they had hauled in for atmosphere and they’re hopeful that the Ospreys will nest on it this year, since they’re sitting on its lot and it’s about time for mating season then it’s likely that they will do so.

Neil went out this morning and took a few snapshots of the Hideaway. Here is the RV parking area; this will be reconfigured in a couple of weeks to have 3 wider spots instead of the 4 they have now. New grading and gravel, new landscaping, and all new utility hookups are also going in. 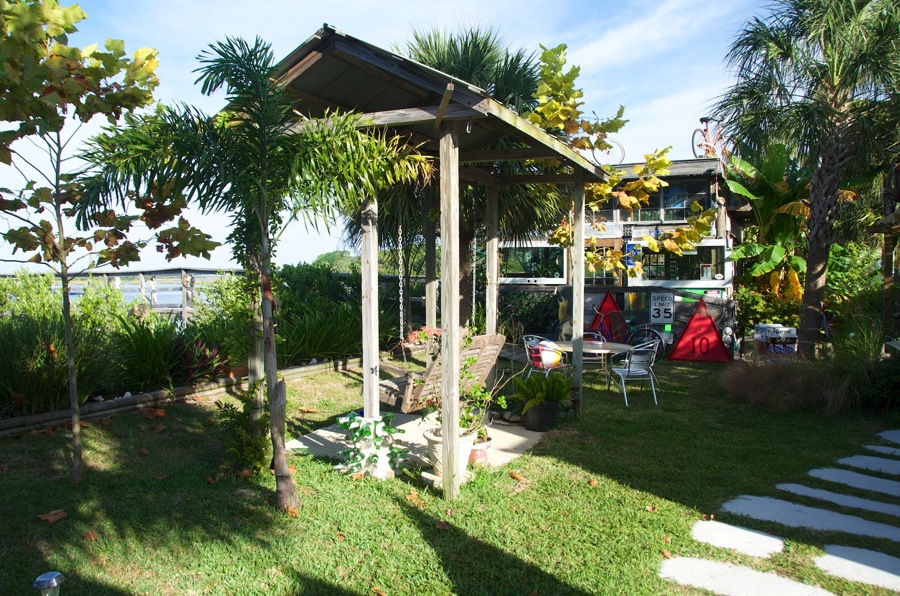 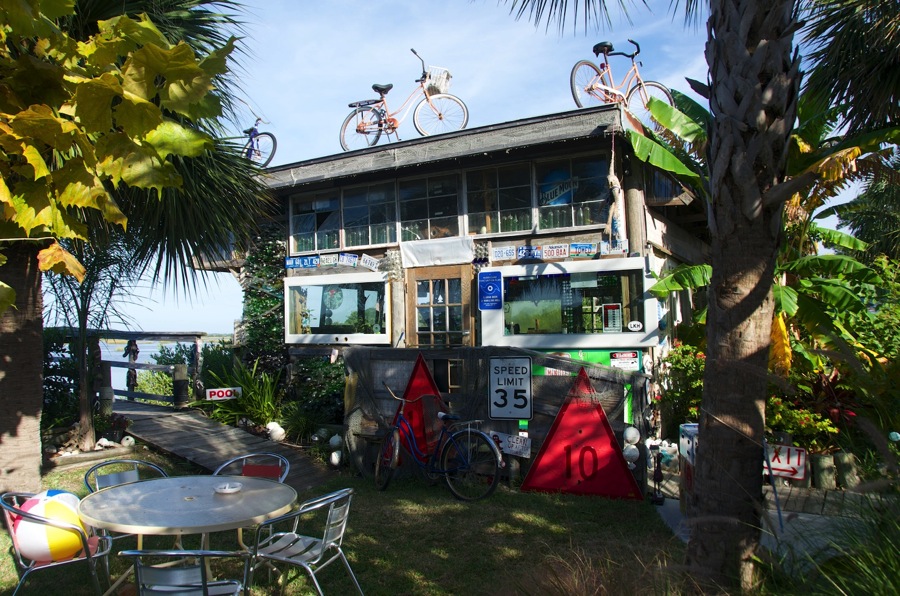 Here is a panorama view taken from just past the Pool sign on the dock there to the left of the Tiki Bar. You can see the boat that was in the nighttime picture the other night, the Osprey nest platform over the top of it and off to the right the mudflats (although it’s not low tide right now so they aren’t mudflats at the moment). The hanging/swinging chairs out on the dock also had our butts in them some this week.

All in all…quite a nice place for the week and actually reasonably cheap. Daily rate is 40 and weekly is 15% off so we paid 238 for the week plus another 120 or so in beer and wine at the Tiki Bar. Haven’t spent anything extra on food as we’ve been eating in and on what Jason makes…he comes over 2 or 3 days a week and cooks for whoever is here in the Tiki Bar/RV sites/hotel. This has really turned into one of our favorite spots to be and I imagine we’ll continue to come here whenever possible…although probably not for more than a week or so at a time as the slow pace of goofing off starts to get to us after about a week.