Another day…another couple of eagle shots for you. Friday while Connie was working Neil ran down in the mid morning to see what might be available. As is usual once the eaglet gets large enough…most of the time it is alone in the nest while Ozzie or Harriet or both are out somewhere hunting or sitting on a nearby perch. Today it was Ozzie who was out and about and Harriet was sitting just above the nest and didn’t move the whole time we were down there. She was sitting about 6 or 8 feet above and to the right of the nest. Since it was morning all of these shots were taken from the East side.

After exchanging hello’s with the other folks watching…we’ve gotten to know each other pretty well over the past months and from last year…we settled down to wait. Mostly for the first hour or so we just waited…and waited…and then waited some more.

Before the eagle pics…here’s a nice shot that Neil found on his travels about the interwebs earlier in the week…people put down the South a lot but this says it all. 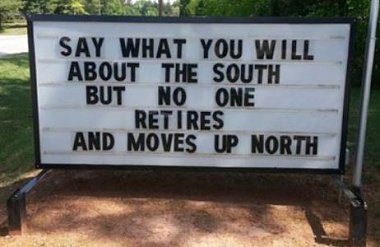 While waiting on something to happen Neil did get a picture of a Mourning Dove sitting in a dead tree near the nest as well as a pretty decent shot of e4. He was also flapping his wings a bit but since he was only doing one of them the photos weren’t spectacular so I left them off of here. 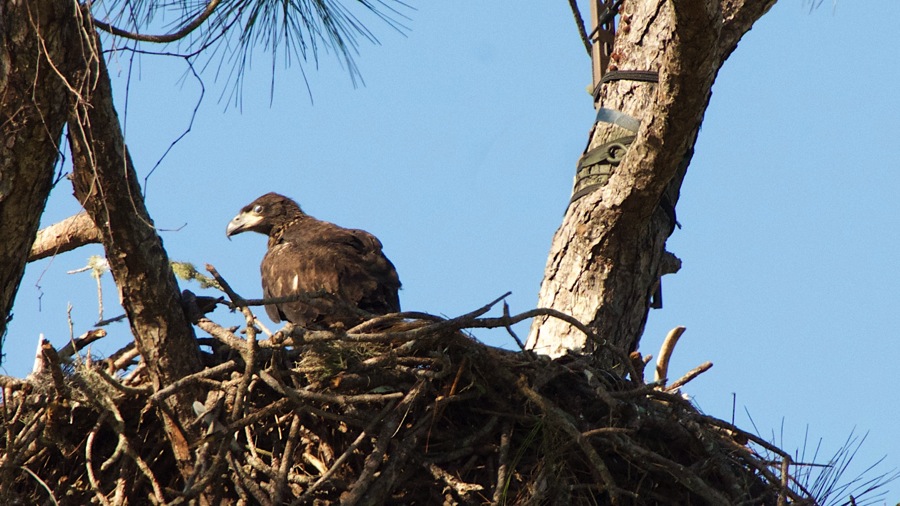 Finally, after an hour and a half or so Ozzie came swooping in from the Southwest (i.e., from the left and behind into the nest). From that particular approach direction it’s almost impossible to get a decent full body picture of the approaching adult (at least from this side…if it had been afternoon and we were around the other side it would have been an ideal approach for pictures)…but I digress. I put this series in anyway since (a) it was the best we got that particular day and (b) you can see the fish that Ozzie is delivering for e4 to eat. I also put in one of her sitting regally over the top of the nest…you can see her on the upper right of the delivery pictures and the last one is a shot cropped in on her. Can’t tell what kind of fish it is but it looks to be a couple of pounds and 16-18 inches long. 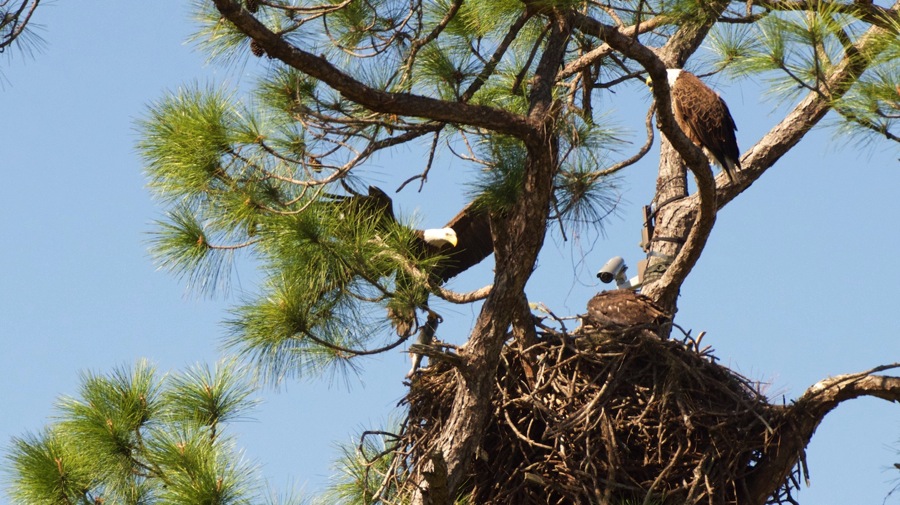 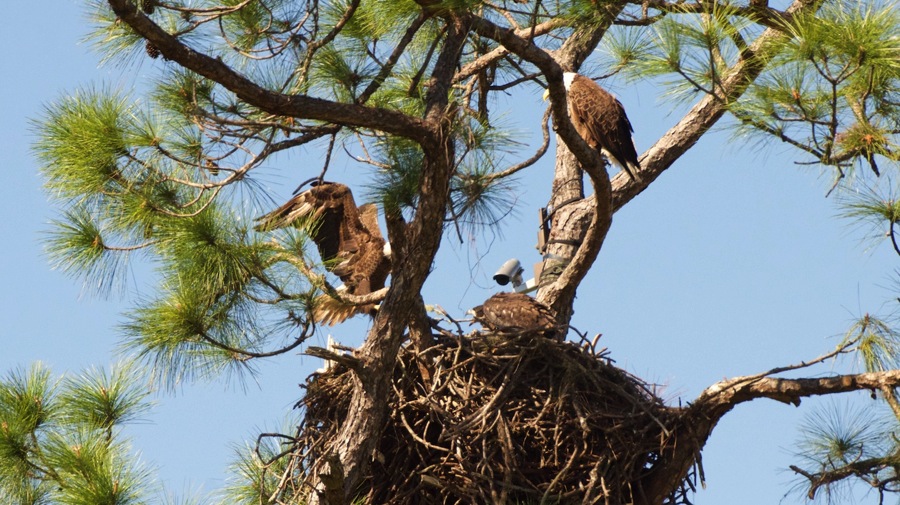 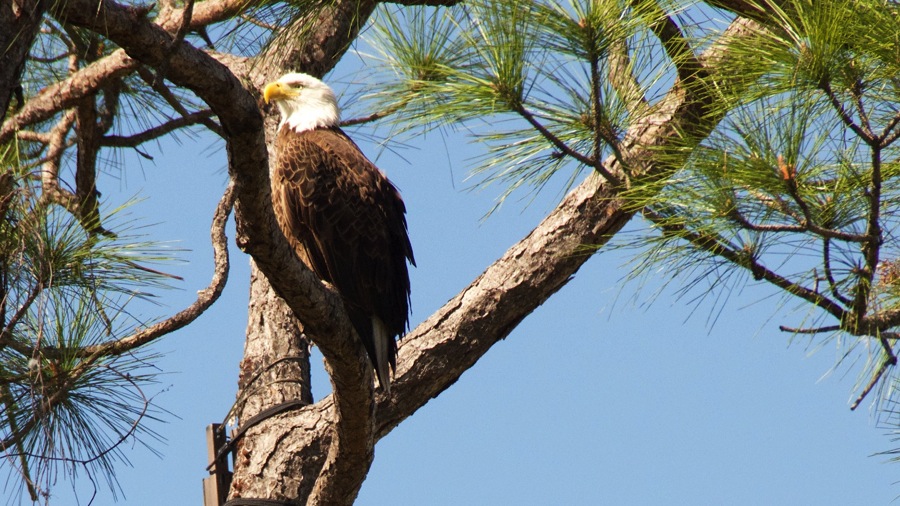 Ozzie never moved from that spot in almost 2 hours that we were there.

We headed home for lunch as Neil was getting hungry. Later on we went off to Walmart and stocked up on vittles. Saturday we just lazed around and had a campfire in the evening. Tonight we’re headed off to Sarasota for dinner and the Alton Brown Edible Inevitable Tour…don’t know what all he’ll do but it really isn’t a cooking show…a little song and dance and who knows what else. Let you know how it was in my next post.

Tomorrow we’re off early to Corkscrew Swamp Sanctuary…hopefully the water is low enough that we can get some nice water bird and gator photos…but ya never know. Friday we’re headed off to Chicago for a Saint Saëns concert with return on Sunday…luckily the forecast has changed and it’s not supposed to snow while we are there although it is pretty much below freezing the whole time…we’ll have to bundle up. After that we’ll hit it pretty heavy starting next Monday when we’re back…we leave the following Saturday for Jacksonville and have a lot of stowing and other final errands to take care of before we leave.

We also have our vacation for the summer scheduled. Our original plan was for a tour of South Africa…which wasn’t so expensive for the original tour but the air fare was almost 8,000. In order to maximize the economic efficiency of that large a flight bill we looked into extending the trip…but by the time we had enough safari and big game picture time so that Neil was happy the bill would have been well north of 20,000. So we nixed that idea and looked into a trip to Ireland and Scotland. Connie’s high school classmate Margie did some planning for us and the price was much more bearable…but we still felt like we were rushing from place to place on the schedule and couldn’t really do either Ireland or Scotland justice. So we ended up deciding to do the whole 3 weeks in Ireland. We leave on June 12 and get back on July 6…do the first 3 days in Dublin then rent a car and drive ourselves around the island with stops mostly in B&Bs but do have 2 nights in a renovated castle. We have lots of exciting stops planned and will have about 2500 or so miles of driving total…mostly it’s a drive 150 miles then stay for 2-3 nights with day trips to see things before another repositioning. We leave Dublin and go clockwise around the country then into Northern Ireland and then back into Ireland to Dublin the day before we return. We’re looking forward to it…and it will give New Horizons plenty of time to handle our warranty work while we are gone.