And yet another great day!!

Our first stop was the Giant’s Causeway which is up between Portrush and Bushmill here in Northern Ireland…we had breakfast then headed out on a beautiful sunny day (I gotta tell ya…Ireland has probably used up their quota of nice days or the year giving us all this nice weather for our vacation) and got to the Causeway which is the second of our three stops at Ireland’s 3 World Heritage Sites. There are a bunch of cliffs that resemble the ones over at the Cliffs of Moher although they aren’t quite as high. However, the weather and lighting was so much better today that Neil was able to get decent pictures. We ended up walking between 3 and 3.5 miles probably over the site…things are a lot farther apart than you think they are.

The basic fable behind the causeway is that it there was a Scottish giant (Bennandonner – the RedMan) and and Ireland giant (Finn McCool) who were rivals. They built the causeway to be able to get across the Irish Sea to do battle with each other because as you know giant’s hate to get their feet wet. The Irish giant ended up scaring the Scottish giant into leaving Ireland forever and tearing the causeway apart as he fled in terror. Much later the scientists decided that it was just geology but the giant story sounds better. The causeway (as you’ll see from the pictures) is composed of about 40,000 basalt columns in close proximity. They’re polygonal in shape and have 5, 6, or 7 sides and are about 18 inches across. They’re all various heights and walking across them gives you the impression that you’re walking through a giant Escher painting…he’s the guy that painted all the strange steps in his paintings that are impossible. Connie forgot to change her shoes into her sneakers before we headed out so she didn’t go out on the rocks themselves but waited back on shore for Neil to come back. Here are some photos for your enjoyment…comments added where necessary.

Dunluce Castle that we passed on the way to the Giants Causeway…about 5 miles west on the coast.

The Haystacks…they were supposedly built by Finn McCool the Giant.

Portnaboe or the Bay of the Cows…where cattle fell to their death supposedly. 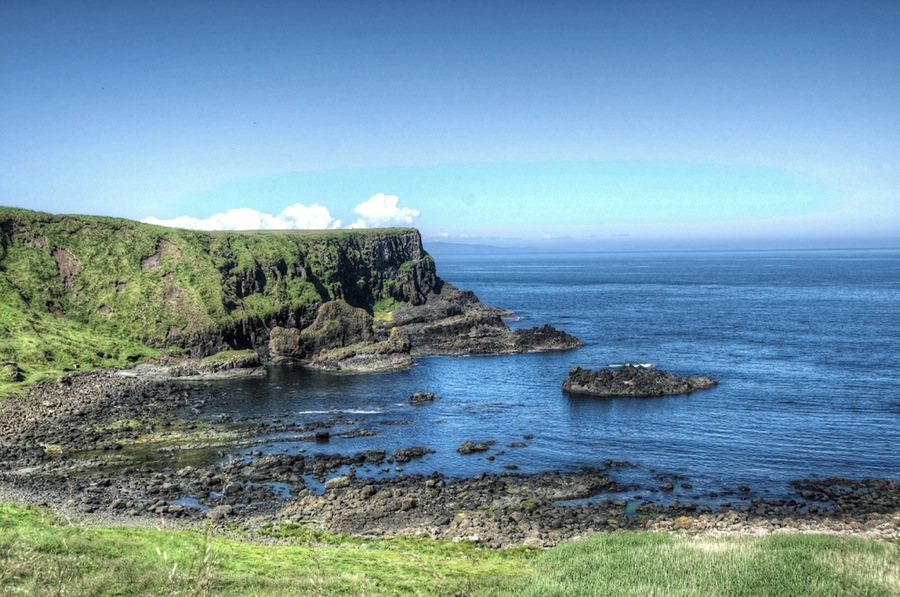 The final resting place of Humphrey the Camel who Finn McCool rode home at speed to read bedtime stories to his son and not be late for dinner. Humphrey turned out to like Finn and stayed on…resting here when his life was over. He’s the small island you see here with his head to the right and humps to the left. 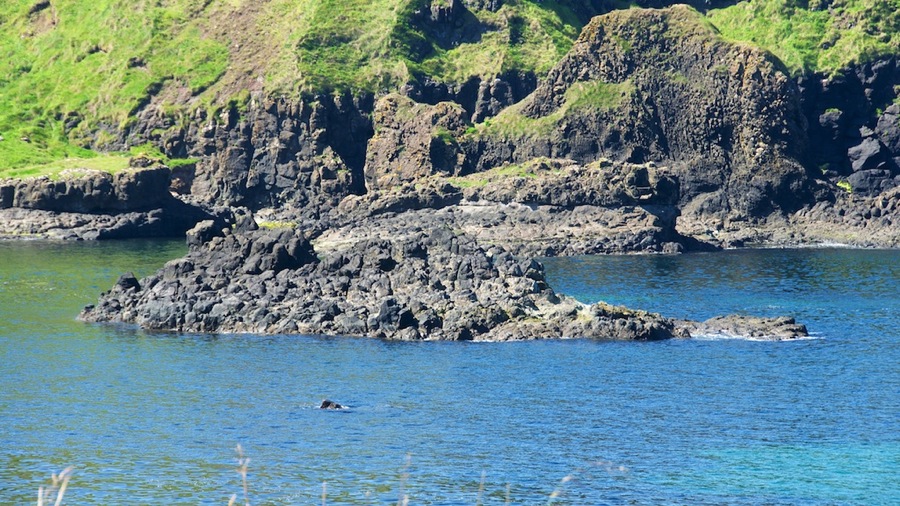 Our first view of the Giant’s Causeway…it’s the extended stone breakwater extending to the left of the frame into the sea.

A closer view of the basalt columns…quite cool really. 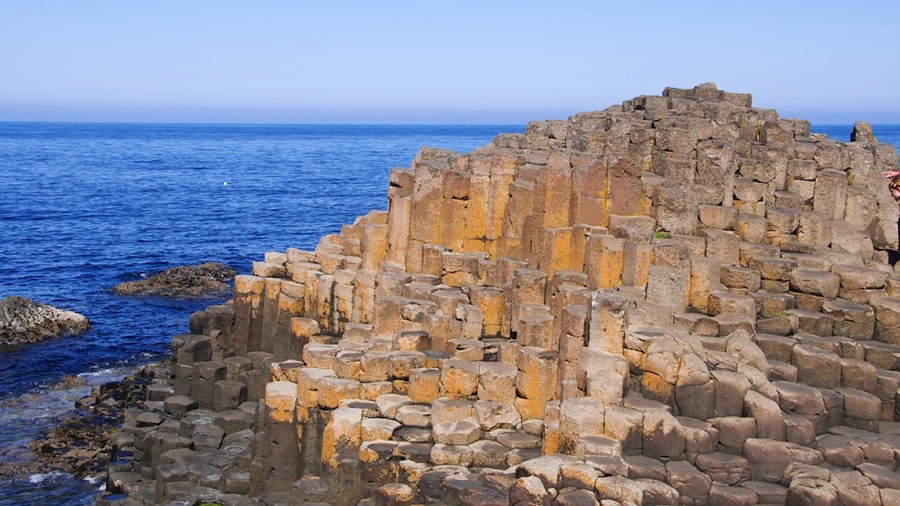 A close up that Neil converted to B&W…he likes the patterns and textures and thinks the lack of color in this one emphasizes them. 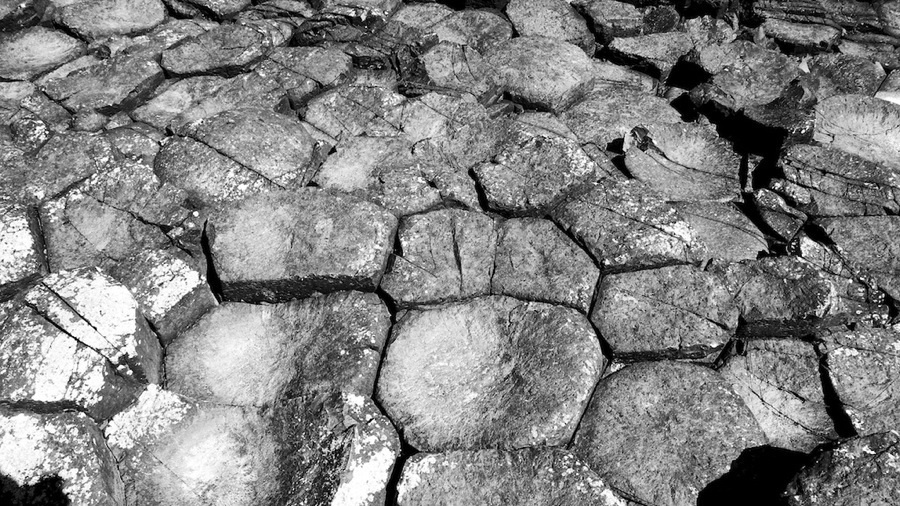 Neil standing at the seaward end of the Causeway looking back to the south toward the mainland…there’s a shot later taken from the highest point on the bluff that you can see here. The columns are very stable…as I said it’s like walking through an Escher painting with varied steps up and down.

This is Neil at the seaward end of the Causeway looking north. It was taken by his new friend Leslie from Oxford England who was here without his wife since she wasn’t feeling well. Neil returned the favor by taking photos of Leslie looking both seaward and landward.

The east face of the land end of the Causeway. 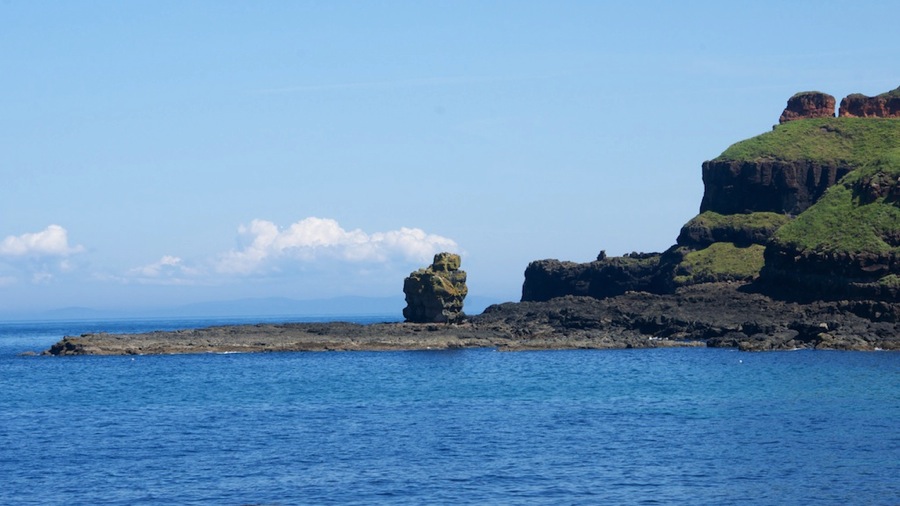 This is known as the Giant’s Boot…it’s supposed to be a boot that Finn lost when he was running from Bennandonner…based on the size he would have worn a size 93 boot and would be about 16 meters or 53 feet tall.

Looking westward toward the windy gap and the Causeway as we headed up the steps to the top of the bluff to head back to the visitor center. 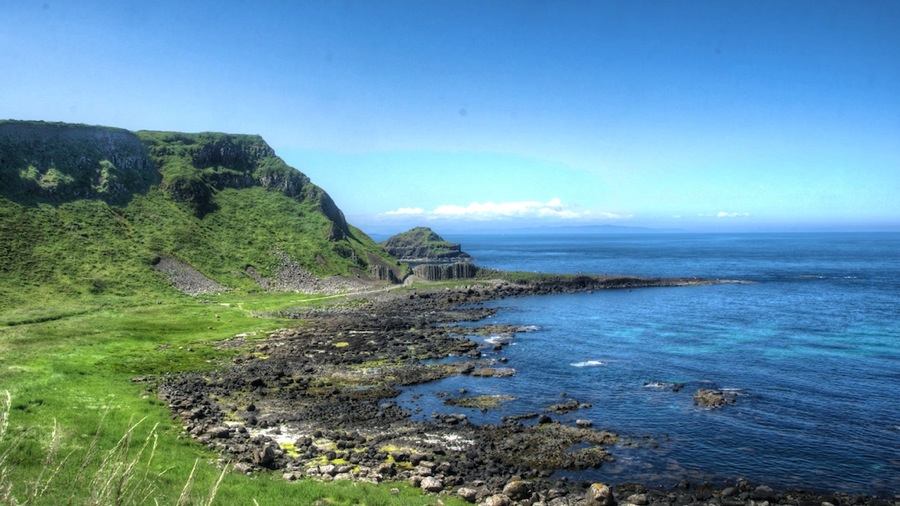 Taken looking pretty much straight down from the top of the bluff onto the Causeway…I told you that you would see this one later. The grass in the foreground is the edge of the bluff about 350 or so feet high…Neil stayed 3-4 feet away from it as the first step woulda been a doozy.

Looking back westward towards the Haystacks, Humphrey the Camel in the bay just to the left of the haystacks and the top of the Causeway. About 300 feet up here…you can get a feel for the height by the little dots of people on the walking path. 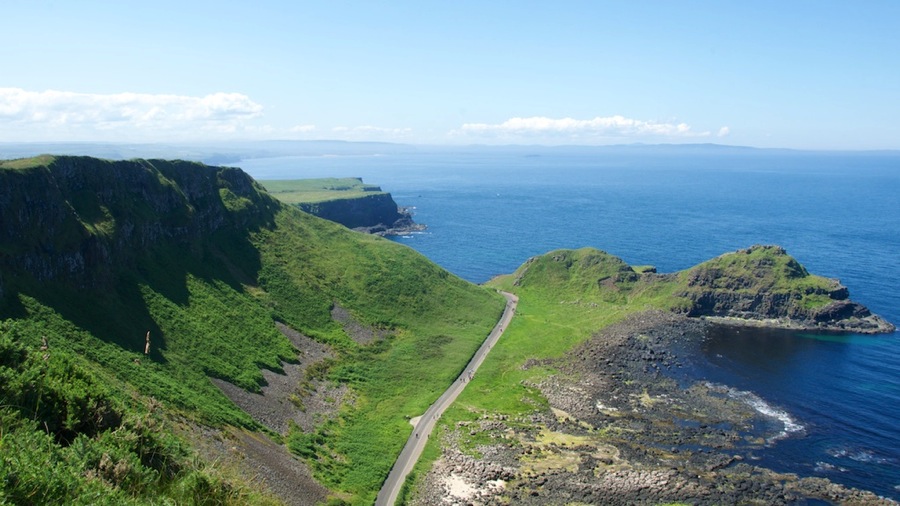 Looking southeast from the top of the bluff right after the above shot Neil spotted this quaint little country cottage.

From Giant’s Causeway we headed off to the rope bridge out to Carrick-a-Rede. This is a small island separated from the mainland by just a few feet and the salmon fisherman back in the day built the rope bridge to get out and tend to their nets. We passed on crossing the bridge as it was 5.60 pounds (10 bucks) each…and the island was maybe 2 acres in size. We passed this little cleft in the seaside cliff face as we headed out on our 1 kilometer hike out to the bridge site.

The cliffs looking back west toward the parking area.

The bridge itself. CNN recently featured this bridge (which appears to be in excellent repair) as one of the 11 most dangerous bridges in the world. It’s 60 feet long and 84 high…does it look dangerous to you? Me either, I think it got on CNN’s list because it was cool…not because it is dangerous. 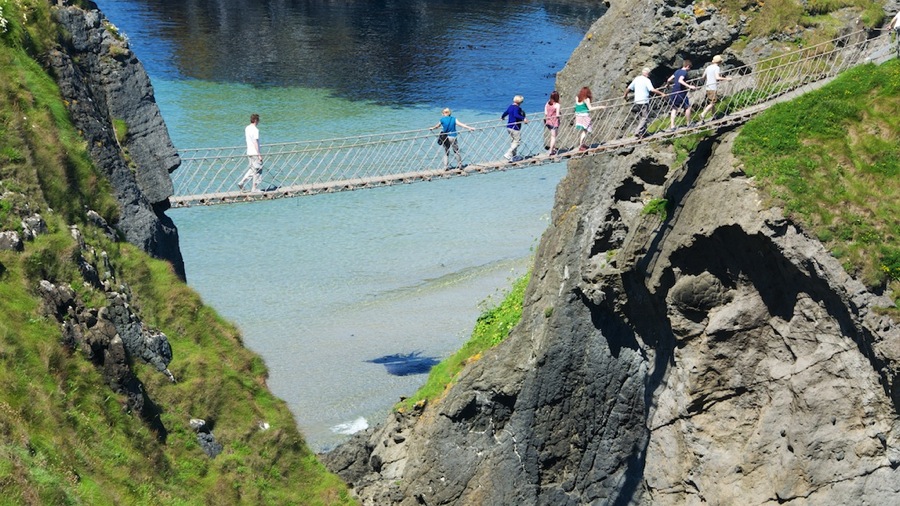 With that our day was done. We were originally going to take the Seaside Causeway Road back…but after our 3-4 mile hike and about 500 feet total of elevation gain we were just too tired…so we took the GPS recommended route home instead of the scenic route. Had a rest at the B&B then went over to the same place we had dinner last tonight as it is the only walkable place…we’re gonna find someplace tomorrow as eating at the same restaurant 3 days in a row isn’t cool…even on vacation.

Tomorrow we’re going on another driving tour south and east from Derry…Connie is still figuring out what we’ll see.