Ya know…an oft used saying in the RV world is that our plans are set in Jello…and not very firm Jello at that. This has definitely come true for us this summer…details below.

Other than plans changing…not really anything going on since my last post. On Friday Neil went out to start packing stuff into the storage compartments and to verify that the brake controller, cameras, and hitch compressor that were transplanted from BAT were installed correctly.

The first thing we noticed was that it wouldn’t crank…dead battery…after some thinking and talking to Tom Martin who owns Classy Chassis it was just a matter of the truck being delivered to them in early January and although it got driven over to Elkhart about 50 miles away for the bed installation it returned in early February from there and hasn’t really been driven since. Moved into and out of the shop a few times but that’s about it and with the combination of not being driven, testing all the equipment as it got installed, and the demo when we did the delivery the batteries just ran down. Tom brought over a battery charger and Neil left it on for 15 hours which got the batteries up to about 75%…then on Saturday he and Connie went on a drive…about 60 or so miles at pretty much highway speeds and all appears well now.

Anyway…after he did the packing he backed around and got the rear of the truck close enough to being hitched so that the 7 pin cable which provides brake and light control to the rig and the camera cables would reach and verified operation. Brakes and lights are perfect…cameras are almost perfect. They all work…but the display normally shows all 3 cameras but switches to just the left or right one when the turn signal is engaged. This part worked as well…but unfortunately when you put on the left signal the right camera displays and vice versa. He put in a call to Donnie…our Classy sales rep…and asked to have someone come out this week to fix it…would be better to do it here at the park where the rig is available so that testing can verify the fix. They’ll either have to reverse 2 sensing wires in the under dash portion of the wiring or figure out which two connectors to switch back in the bed.

Our drive was nice…although we hadn’t figured out all the various controls for the truck instrumentation and truck control system yet. There are two display screens in the cab…the first one is over the steering wheel between the tach and speedometers and has about 15 different screens to show you various sets of information. It also includes 6 user selectable locations where you can choose what you want to see. Here’s a photo of this screen…although this one was actually from our friend Bill Napier’s 5500…I didn’t see any point in taking another one. We’ve currently got different options selected for the 4 circled areas but we’ll have to see what we really want to have there. The two on the left (turbo boost and engine braking horsepower) I think we’ll leave that way. As of now I have current and average mpg as well as outside temp and range until empty in the 4 small areas. 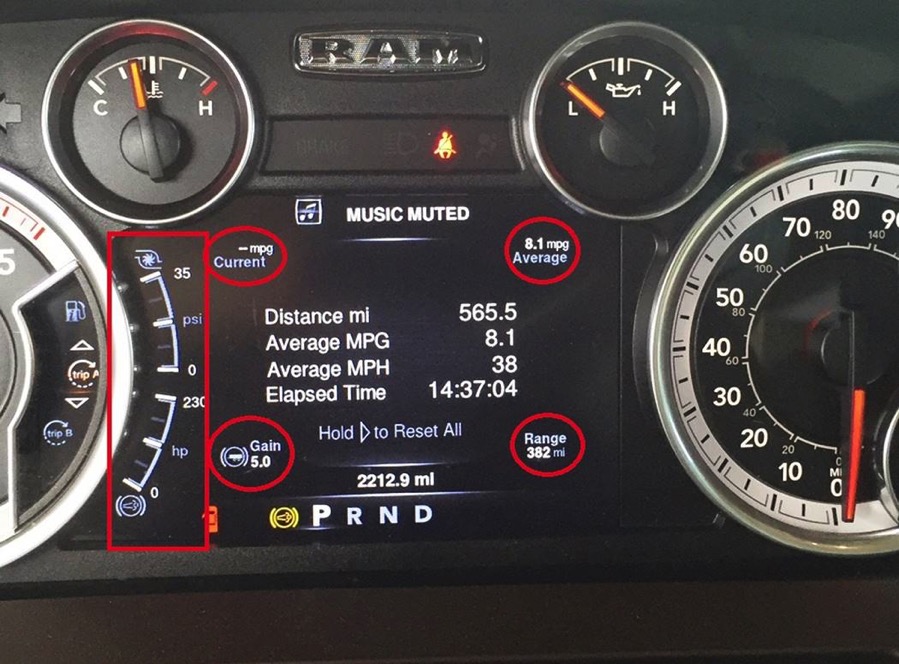 Rather than the trip odometer shown in the above photo we’re using the engine parameters one as shown in this photo.

We ate dinner at this local bar on Friday night named The Other Place…in beautiful downtown Wanatah IN…not much there but the Guinness was cold and the bacon cheeseburger (Neil) and fried perch dinner (Connie) were both excellent.

Saturday we went on a drive up north to the southern end of Lake Michigan…mostly to put some highway miles on Big Red to finish charging the battery but also to get out of the house as both Connie and Neil were getting pretty stir crazy just doing nothing. We did get a nice shot of downtown Chicago across the lake…you can just see the tall buildings in the photo below along with the really big waves rolling onto the beach…it was pretty windy Saturday afternoon…probably 25 knots directly from the north and pretty cool as well.

Those are probably 2 foot high waves rolling in…darned big for a lake.

Speaking of weather…I think the weather guesser folk in Indiana forgot that it’s May and it’s supposed to be warm…it hasn’t been. Our warmest day so far has been maybe 75 and all the others just in the 60s with overnight lows mostly in the 40s but down to 39 one night. Brrr…that’s enough of that stuff.

Monday we had another appointment for Connie up at Retina Specialists in Michigan City…Doctor Vyas did a little bit more laser work but still has a small amount to do. Unfortunately the last piece is behind her bubble so she’ll have to wait until it’s gone to get that part done. Luckily it’s not where the actual detachment was but is just an area she wants to tack down to hopefully prevent a recurrence. Her next appointment is in 2 weeks…and then most likely another 2 weeks after that at a time until the bubble is gone…then it will be 3 months for the final follow up.

The 2 week followup allows us to go ahead and depart Hanna on Saturday morning and head 2 days down to Chattanooga where we’ll attend our previously scheduled New Horizons Owners Group (NHOG) rally with our friends Bill and Linda along with 30-something other New Horizons owners. Our original plan after that was to head over to VA to see grand baby Alex then up to the DC ‘burbs again for dental/eyes/finance guy appointments but instead when the rally is over we’ll come back up to Hanna where we have a site on a monthly rate…arriving a week from Sunday for her appointment on Monday. Assuming that goes OK…we’ll head over the following Friday to our old haunts in Fairfax VA…not sure at this point whether we’ll take the rig or just drive over…it’s only a little farther than Chattanooga is and we do have paid reservations at Bull Run Regional Park for that week already. After that we’ll head back here for her hopefully final 2 week followup then we will be free until about Labor Day.

Looking at our schedule…we’ve decided to cancel our Canadian Maritimes trip…what a bummer but with the potential for further eye issues then being out of the USA would make medical coverage much more difficult/expensive so we’ll have to regroup. We haven’t made any firm plans yet…but Connie would like to head up into the east side lower peninsula of Michigan for a bit then maybe over into western PA and NY…we’ve never been in those areas of the country. We’ll work in an earlier stop in Elkhart IN to get the rig wheel bearings done rather than waiting until late September for that…then assuming that all is well with her 3 month checkup we’ll head generally south and east. Our hope at this point is that we can just reconnect with our original scheduled stop in VA for grand baby Alex time in early October then southwards through our other already scheduled stops. Time will tell on that though. Assuming she’s still not cleared to drive…we’ll just leave our Mazda here in a storage yard…we toyed with the idea of Neil driving it over to VA to leave with Bryan and Jen then flying back but it’s significantly cheaper to just put it at one of those U-Store-It places for a couple of months since we have to come back here anyway. She’ll likely need a new left eye lens prescription…but until all settles down with her eye it’s pointless to get one. Actually…Doctor Vyas told her that she was legal to drive right now…but with the bubble in her eye it makes her perceived vision worse and she doesn’t feel safe to drive even though she’s technically legal. We ran into a guy at the second local dive bar we’ve been to last night who had a detachment as well and he said his bubble took 3-4 weeks to disappear. We’ll evaluate her driving capability before we head out for an abbreviated set of travels of course…but at this point we’re figuring that storing the Mazda will be the right answer.

Neil’s been madly cancelling Canada park and ferry reservations this morning…we’ll have a nice credit balance on our Visa card later in the week as he just paid the bill this morning as well.

OK…I guess I owe you a report on Hanna area dive bars…there are a total of 4 and we’ve been to two of them. First up was The Other Place over a couple miles west in Wanatah…food was actually pretty decent there and while the beer selection was less than optimum at least they did have Guinness although not on tap. Last night we went over to Rumors Restaurant and Bar…maybe a half mile from the park entrance…and we pretty much won’t be going back there. Beer selection was even less optimum…we ended up drinking a draft MillerLite and then a bottled Miller High Life…which are (predictably) cheap lager brews with not much taste. Connie had a taco salad which she said was excellent…Neil a bacon cheeseburger that was mediocre. One thing I can say about the places up here though…they give you enough fries to feed a family in Bangladesh for a week…there’s absolutely no way we could eat all of those even if all we ate was the fries. We’ve still got the Hanna Hub to try…which looks like a biker bar since it had a dozen or so parked outside…and I’m not holding out a lot of hope but we’ll try it anyway; as well as the Whitehorse Saloon which is up in Union Mills.

Interesting Things of the Week.

The Church of the Confused Chicken 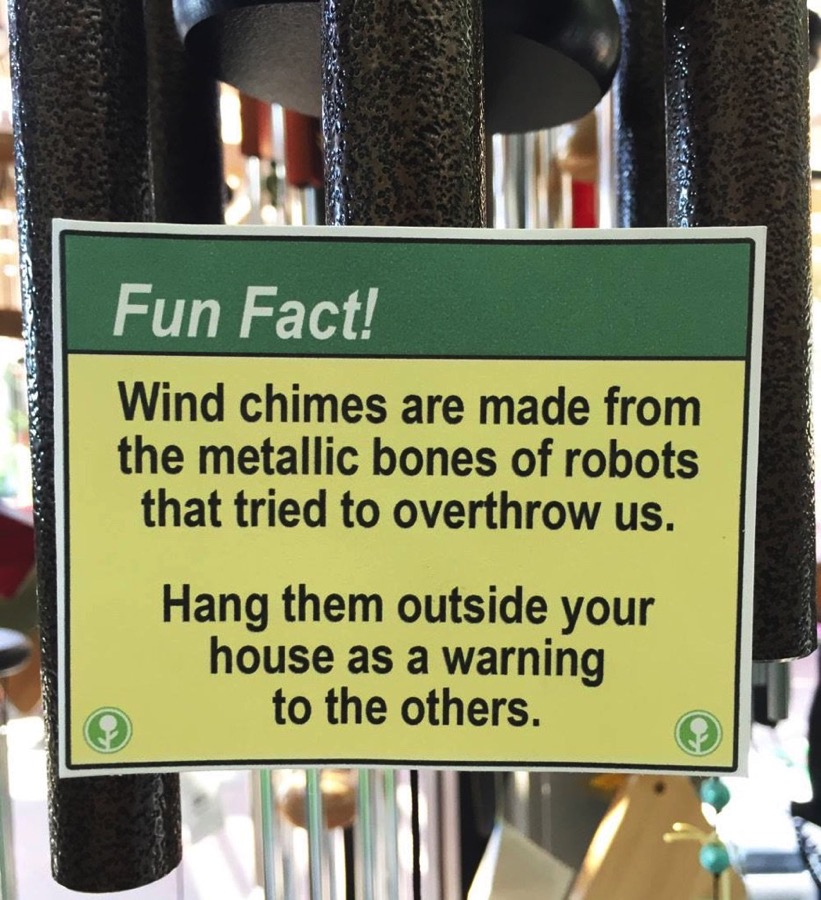 I always wondered what diapers and politicians have in common

I see the French have landed on the moon 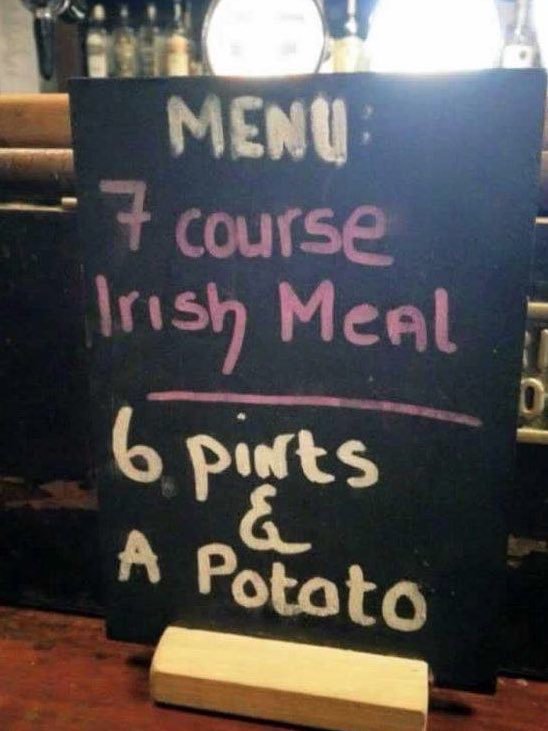