Lemme see what we’ve done in the almost three weeks since my last post.

Neil’s been struggling with getting his bike fixed; just after we got here to Seminole he discovered that if he gets into the smallest cog on his rear cassette…that’s the highest gear for you non bicycle types…that it kept trying to shift to the next smallest cog every 10 seconds or so. He took it into the local bike shop JRA (for Just Ridin’ Around) since they had done a tuneup, cable replacement, brake pads and adjustments back in the spring. He ended up going in 3 times trying to get things right…the first time the co-owner told him that it was a bad chain…he found this strange since the chain was replaced in the spring and he’s only ridden less than a hundred miles since then. So they replaced the chain for free…but it didn’t solve the problem. Took it back in and the other co-owner said it was because the rear wheel wasn’t properly seated into the lugs it fits in. So they reseated it and said it’s fixed…again it wasn’t. Took it back in the 3rd time and they said it was the rear derailleur bracket that was bent…so $30 for the bracket and $25 for installation…and they claimed it was fixed…and you guessed it…it wasn’t.

At that point…they became so fired and he asked Tommy on the Seminole staff who bikes a lot who was good and they sent him to Paradise Bicycles about 6 miles down the freeway. He went in there, described the problem and the failed attempts to fix it…they asked him who worked on it and when he told them Greg said “Ugh.” He didn’t want to badmouth another shop but said that he had heard more than one complaint about them. So Greg went out for a test ride behind the shopping center and came back with a diagnosis of worn cassette…that’s the gear section that is on the rear wheel and contains the cogs. He put one on order and also suggested replacing the derailleur itself as it’s springs were worn and it wouldn’t shift smoothly anyway. So another $112 for the parts and installation and lo and behold…it’s fixed. Paradise has earned his business down here from now on.

Connie went out and sang Christmas carols at one of the local retirement homes last week…she was supposed to go again on Thursday but it got cancelled due to rain…the old ladies in the choir convinced the director that going out when it was raining was too dangerous.

We had the strangest rainstorm this week though…high winds both Thursday and Friday along with rain both days. Thursday it was pretty much steady all day rain but Friday was really strange. It would go from dead calm winds with a beautiful blue cloudless sky to 40 knots of wind, ugly dark gray skies and deluge rain in 15 minutes…then another half hour later it was back to beautiful again…this happened 3 or 4 times throughout the day. Very strange weather indeed.

Neil made a few campground reservations for us…while the detailed planning is still in progress for the upcoming travel season…we know where we’ll be for Memorial Day, July 4th, and Labor Day so he went ahead and made those reservations at Cañon City CO, Foster OR, and St. Louis MO respectively. Others will come later on. He also changed our arrival date at the NHOG Rally in Kerrville TX to arrive Tuesday before the rally rather than Thursday…he’s got a floor project and several fellow NHOGers have graciously volunteered to assist…for pizza and beer naturally.

Connie had her annual eye checkup since she had retina and cataract surgery on her good eye…all looks great so she’s clear for another year. We also had our bi-annual dental cleaning…the hygienist down here is much more gentle that the ol’ Tooth Nazi that we used to go to up in Fairfax.

We’ve been watching the news with all the hubbub about the Wall, the government shutdown, fixing DACA, immigration reform, and all the various other topics of the week. While I have to agree that sometimes the President says dumb things on twitter…he did win the election after all and elections have consequences as a former President used to say. Seems to me from what little we watch and read of the various talking heads…would that be headlets…on both sides that the left is now against what they were for 2 years ago just because they don’t want to give the President a victory on anything. What the hell happened to reasonable discourse in politics and the ability to compromise and give a little/get a little in return so that good legislation can get passed. I wish I thought it would be different now that the other side will be running the House in the new year…but I’m pretty certain that all we’ll hear is impeachment and let’s hold some more hearings into “what did the President know and when did he know it”. I dunno…methinks we should implement the election requirement that Neil has proposed since he was 18 and could vote for the first time. He thinks that in addition to the candidates names on the ballot…there should be a choice “None of the above”…and if None wins then there must be a new election and none of those candidates can run in it. Maybe that way we could get some common sense back in DC. Unfortunately…the folks in DC, NY, and CA think that they should run everything and everybody in flyover country in the middle should just let them do it…they seem to forget they work for we the people…and getting reelected and making the other side look bad is more important than actually getting their job done.

Connie’s been on a roll at Bingo…she won 3 times at the lodge 2 weeks back and in two of those games she had two winning cards. She also won the jackpot at Seminole Bingo this. Week…$80 for that one and about another $75 for the ones at the lodge so she’s keeping ahead of her expenses.

She also joined the Resurrection Choir at St Therese…well she actually joined up last year…this subset of the normal choir sings at funeral and memorial masses as required. There’s a lot of old people down here so she’s been pretty busy with that since we arrived.

Nothing much else really going on I guess…and no Fun Stuff© to report on so let’s see what else I can babble about.

Here’s a photo of the two eggs with Harriet down at the eagle nest nearby…this was taken 2 days ago. 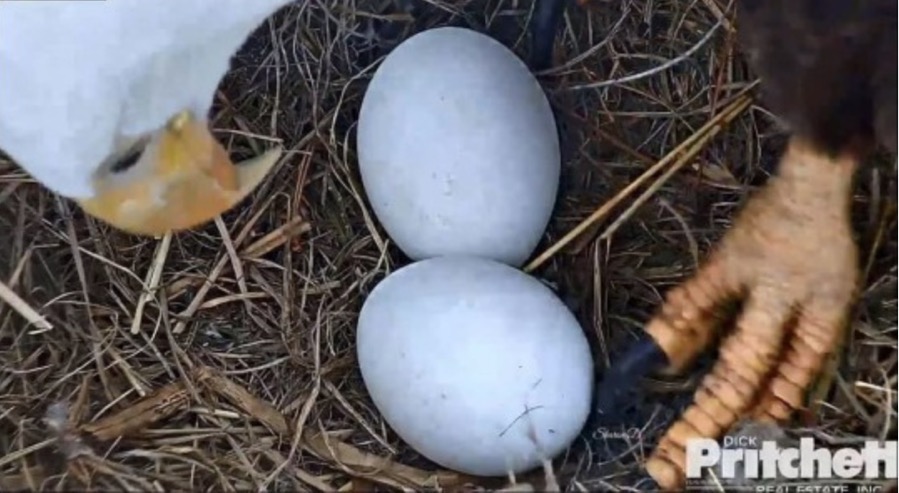 I just noticed when I was there to get this image that as of 1126 today (Dec 23)…the first egg has hatched and E12 made its entrance into the world. The second egg is about 2 days behind based on when it was laid.

Neil looked at the live eaglecam…M15 is sitting on the nest but the li’l guy…or gal…is nowhere to be seen. Not surprising since it’s only about 65 degrees today and he’s all of 3 hours old at this point…I’ll keep an eye out and if I can catch a baby photo I’ll put it up for ya.

Ok…let’s see what interesting stuff was found on the net this week…holiday related and otherwise.

This is what a Nativity scene would look like if Jesus had been born in 2018. 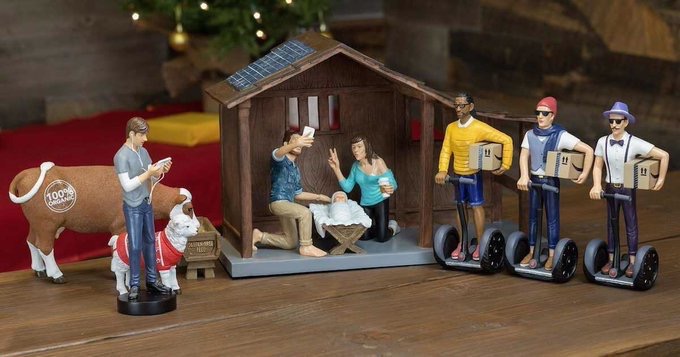 This is a Russian tank modified to have two jet engines on it…it’s used to generate wind to blow out oil well fires.

Owls not only have very silent flight due to their wing and feather design…but they’re smart enough to attack from the blind side of their prey…this guy has no idea what’s in store for him. 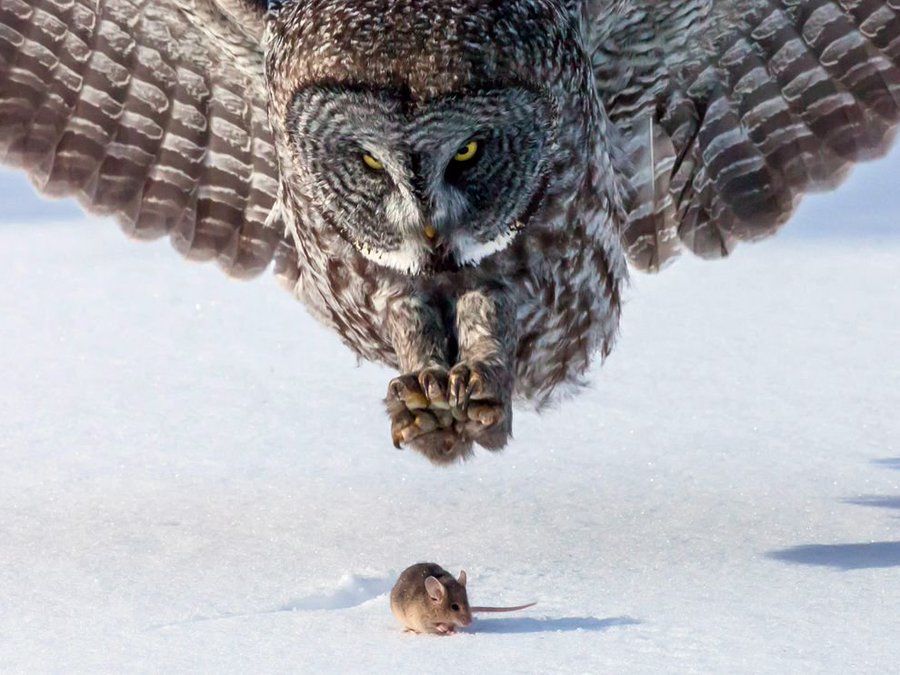 Interesting factoid…I did not know that tropical cyclones don’t cross the equator…but then I guess it makes sense since those in the Southern Hemisphere rotate the other way from those in the Northern.

Another interesting one that illustrates how much space humans take up on the earth.

This is an actual un-retouched photo…not a painting…from a park in Namibia. The trees are Camel Thorns and there is a dune in the background. 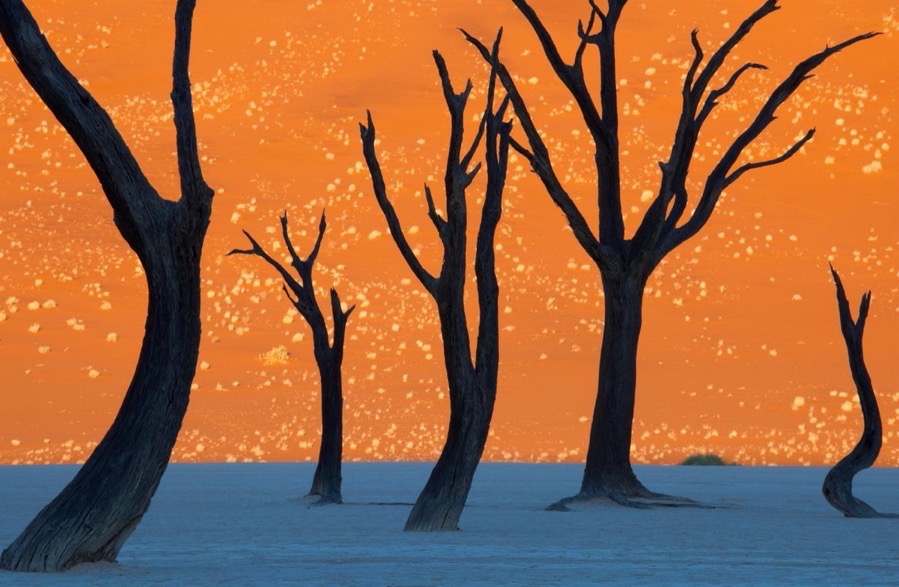 Again…no words necessary for this one.