High Five For The Mighty Five

Yeah…that’s what I wrote…but you’re probably trying to figger out what it means.

There are 5 National Parks in Utah…Zion, Bryce, Arches, Canyonlands, and Capitol Reef. We’ve been to the first 4…Arches and Canyonlands a couple of times…but when we were last out this way in 2017 Capitol Reef was just a bridge too far. With our schedule we just couldn’t get there. Hence…since it’s just south of US-50/I-70…we determined to visit it and that is why we stopped in Green River.

So let’s talk about Capitol Reef National Park a bit…but spoiler alert…it’s another hidden gem. Most people have probably heard of it…but it is way, way more impressive than any of us thought before visiting.

In the central Colorado Plateau…which you will remember is mostly not in Colorado…there is a 100 mile north to south fold in the crust of the earth named the Waterpocket Fold. According to what I googled…it’s a trending fold…that is a section of land where the west side of the fold is 5,000 to 7,000 feet higher than the land on the eastern side. So…millions of years ago when it was formed by tectonic plate slippage…I guess it started out as mostly a cliff that if you were standing on top of it looking east you would see the lower eastern side below. The rock here is layered as it was laid down by oceanic action…but with the harder and softer layers…and millions of years of erosion by water (the Fremont River) it ended up as a canyon with the western rim being much higher. While it does wind a lot down at ground level…from the 20,000 mile high view…it’s pretty straight.

Before coming here…we figured it would be a decent but not spectacular park…because we thought…errantly as it turns out…that it was relatively small and mostly was a fossil deposition location. However…to our delight the views turned out to be about as dramatic as anything we’ve seen…but I’m getting a bit ahead of myself.

Friday morning we headed out early…about 0700…for the 90something mile drive to the park…15 miles or so west on I-70/US-50 then the remaining mileage on UT-24. The highway comes into the fold from the north with a long…we’re talking 30 miles or so long…ridge to the west before you turn west another 20 miles and then enter the park proper. As we got up onto the highway leaving Green River…the first two signs we saw were “Speed Limit 80” and “No services next 100 miles.” This caused us to reconsider our long held definition of roads that we go on our adventures. Starting way back before we moved into the RV…there were paved roads…and then there were the unpaved or right on the edge of the cliff roads…these were affectionally known as “the adventure portion of the tour” for at least the last 25 or 30 years before we became RVers. However…we now have a new definition to add to the list…it’s for roads or situations beyond “the adventure portion of the tour”…this can be either due to remoteness or road quality. Henceforth…this category will be known as “god-forsaken ass end of the middle of nowhere”…it takes adventure portion to a whole ‘nuther category. Friday’s journey encompassed both of those qualities…I gotta tellya…there’s absolutely nothing in east central UT once you get out of town. Then there was the road that we got on at the far end of the “scenic drive” through the park.

As you enter the park…the visitor center is about 20 miles past the park boundary…there are a couple of orientation overlooks before that but the visitor center is located in the old town of Fruita which is surrounded by the park. Fruita was founded by Mormon settlers who lived a simple self sufficient lifestyle growing fruits in orchards they planted along the Fremont River which is the major source of water in the Waterpocket Fold today.

We stopped at the visitor center, watched the movie, moved onto the Gifford House Museum and Bakery where we bought a peach pie and brought it home for later, then headed out on the scenic drive. The drive is mostly along the river in the bottom of the canyon and continues 10 miles south of Fruita. We then headed out on the highly adventurous road down the Capitol Gorge. We went down there another 2 or 3 miles to the parking area. There is actually a road past there…but it requires a back country permit, high clearance vehicle, 4 wheel drive, and cajońes the size of basketballs to go down…so we passed on it.

After we got back up Scenic Drive to Fruita…we continued south another 25 miles or so on UT-24 into the northern portion of Grand Escalante/Staircase National Monument…but that pretty much turned out to be a bust. At the far northern end of the Monument where we were this time…we had visited the southern half back in ’17 while we were parked at Bryce Canyon National Park…well it just wasn’t really worth it in our opinion.

We finally turned around for the 125 mile trip back home…arriving tired but satisfied.

You should really visit Capitol Reef…as I said it’s one of the most spectacular viewing parks we’ve been…and we’ve been to a lot of scenic national parks. It and the Colorado National Monument have been the highlight of our trip so far scenic view wise. Let’s get on to the photos.

This is a 180 degree panorama shot of the ridge to the west of UT-24 as we headed south. It’s about 7 or 8 miles away from the road and we literally drove by it for a half hour.

These little flower buds are the smallest ones we’ve ever seen…the orange buds are maybe 1/8 of an inch in size.

This is named Prairie Dog Butte…guess why. 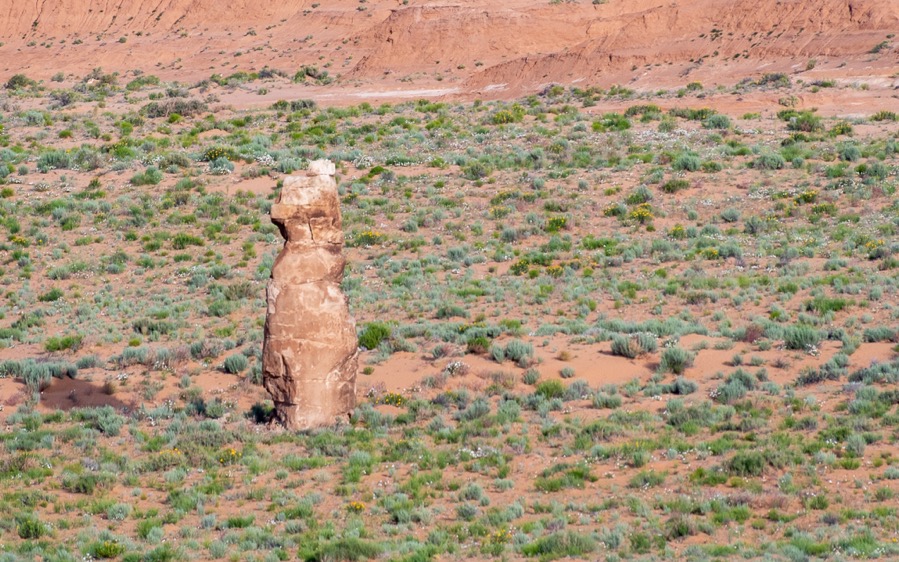 This is Mount Henry…the opposite direction from where Neil took the Prairie Dog Butte shot above…it is named after the first secretary of the Smithsonian Institution. Actually…we could never decide whether it was Henry Mountain or the Henry Mountains…google gave us both answers. 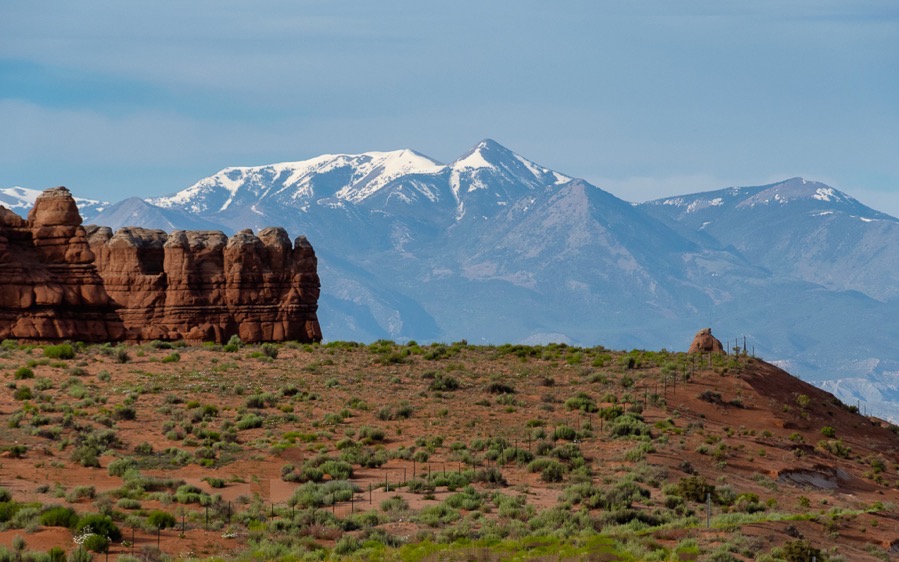 Factory Butte…yeah, I dunno know where the come up with these names sometimes either. Don’t look much like a factory to me although the squarish potion on top does kinda/sorta resemble a building.

Our intrepid explorer getting the above shot. 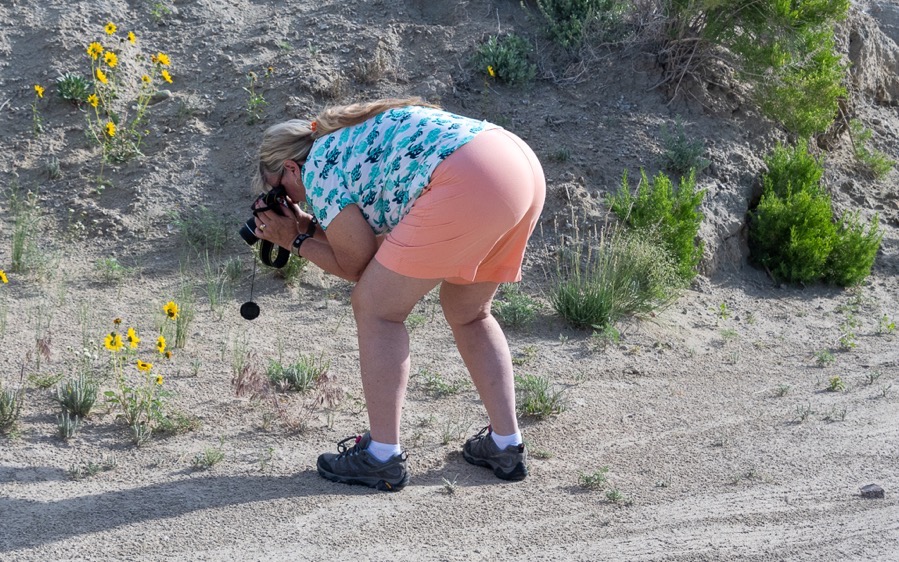 Castle Butte…and the names are getting harder and harder to make a lick’o’sense out of.

And all of that…was before we actually got to the park. Shortly after the above shots we turned west at Hanksville…and then followed the Fremont River and several of it’s tributaries through the buttes and rock formations to the park proper. 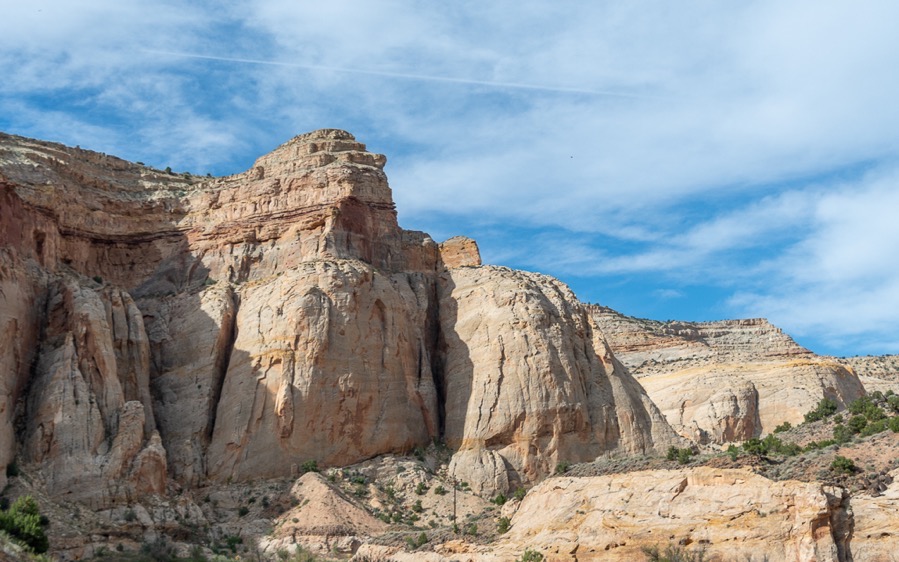 One of the original stone houses built by the Mormon settlers. For quite a while…the road into Fruita was just a mud goat track…it was eventually paved and became UT-24. 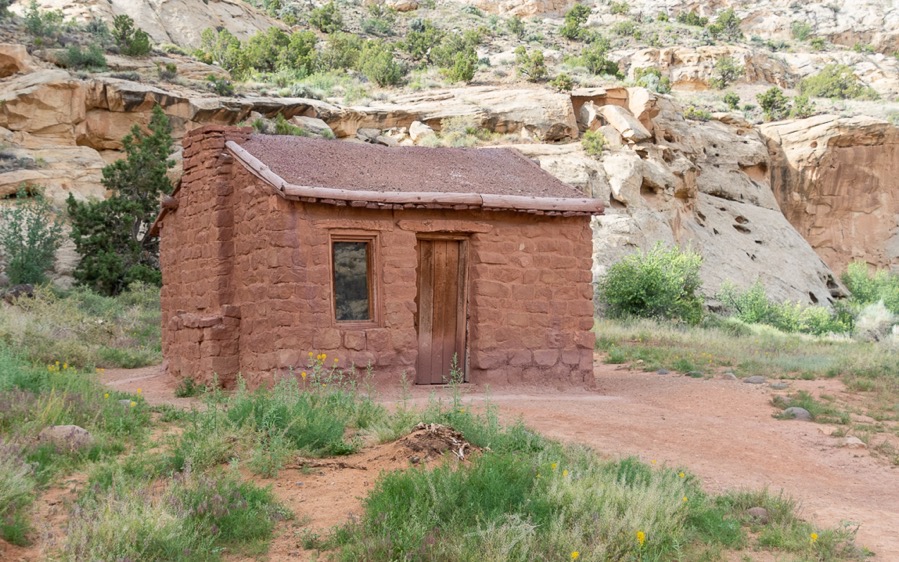 Some of the petroglyphs that were left back around 700AD by Indian residents of the area…these people are about 15 feet high and are at the bottom of an essentially vertical rock face at least 1,000 or 1,500 feet high.

Really cool colors in this section…right outside the visitor center. 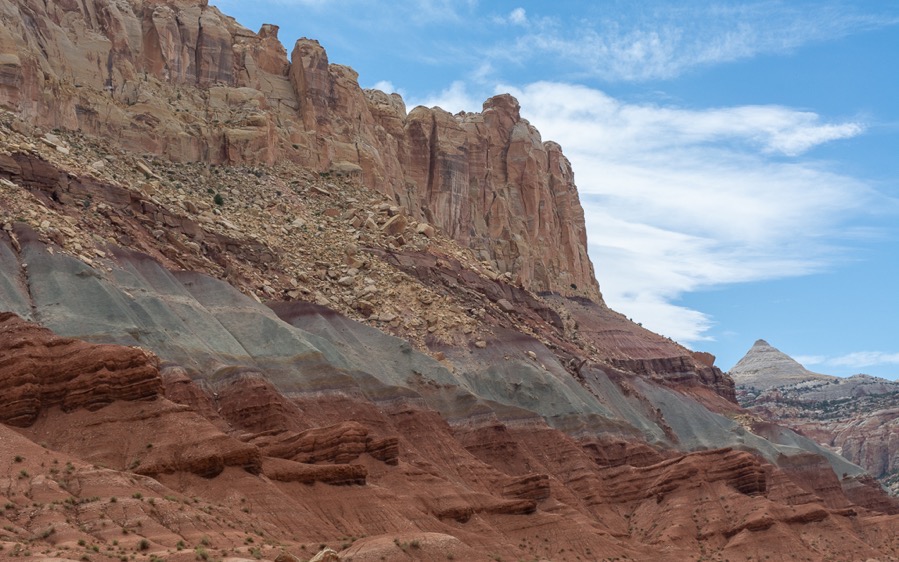 Chimney Butte in the foreground. 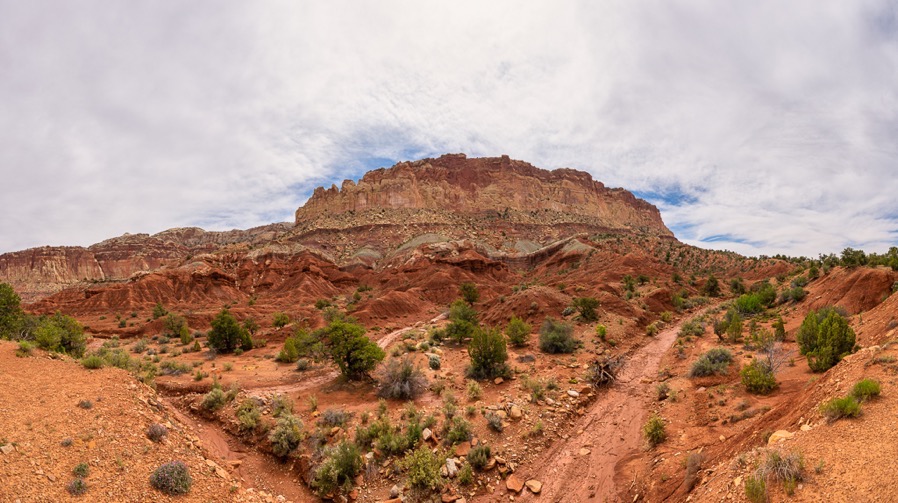 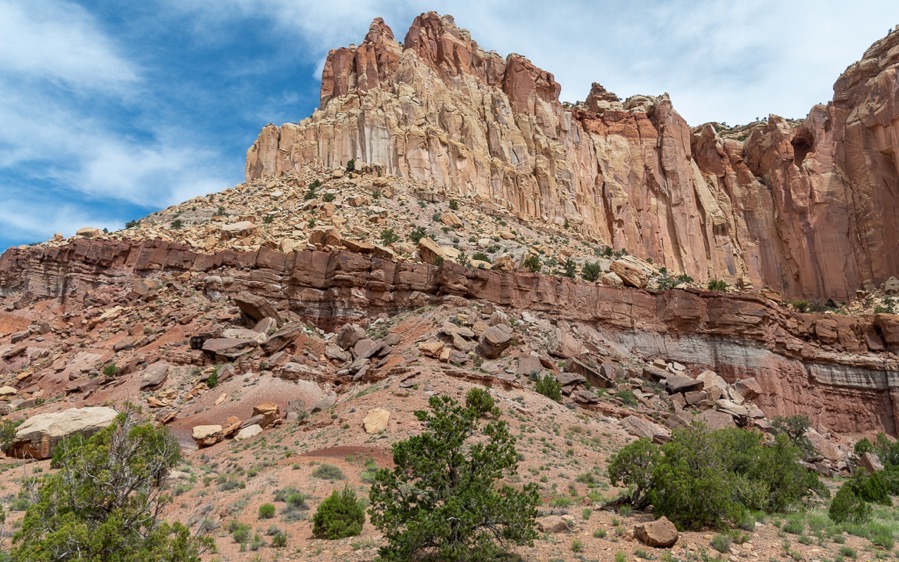 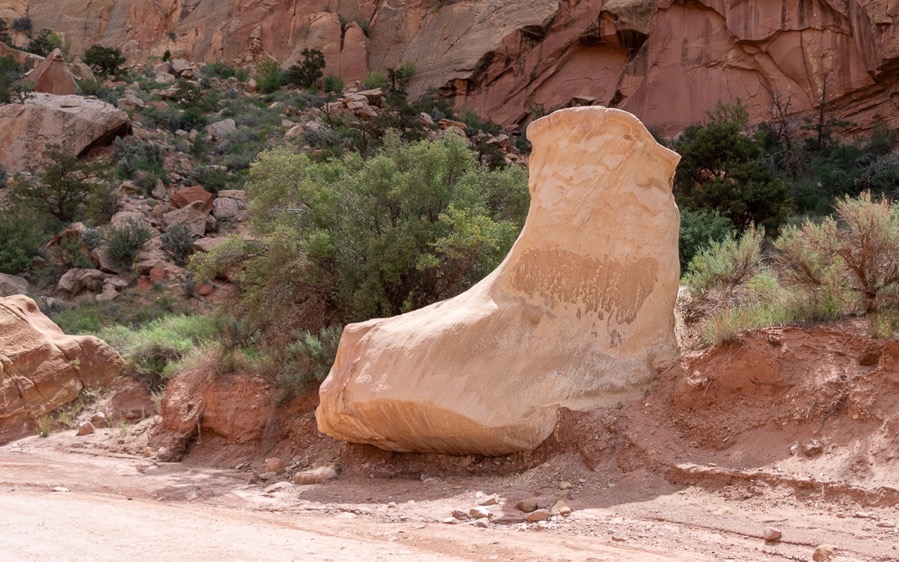 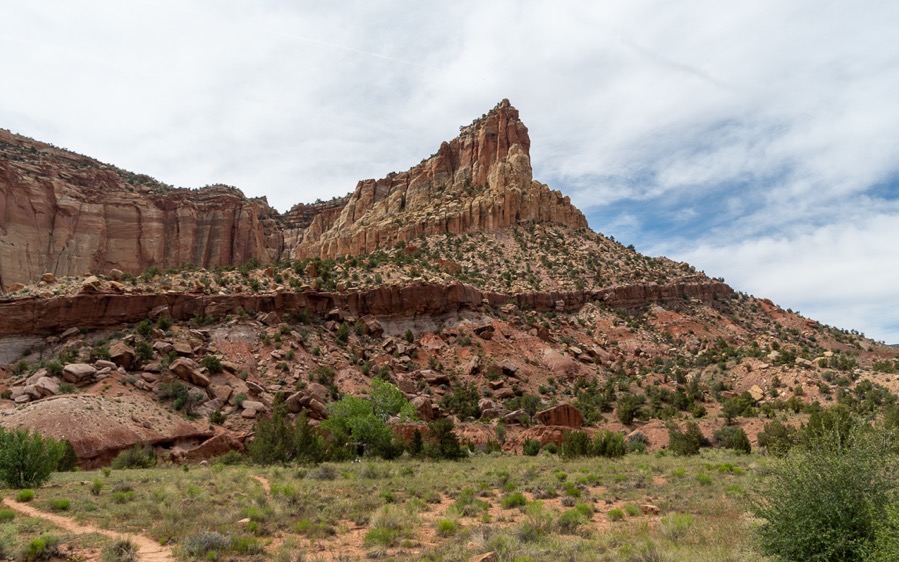 This is the road in Capitol Gorge…seewhudImean?

Views from Panorama Point just before we exited the west side of the park to head further south into Grand Escalante/Staircase. 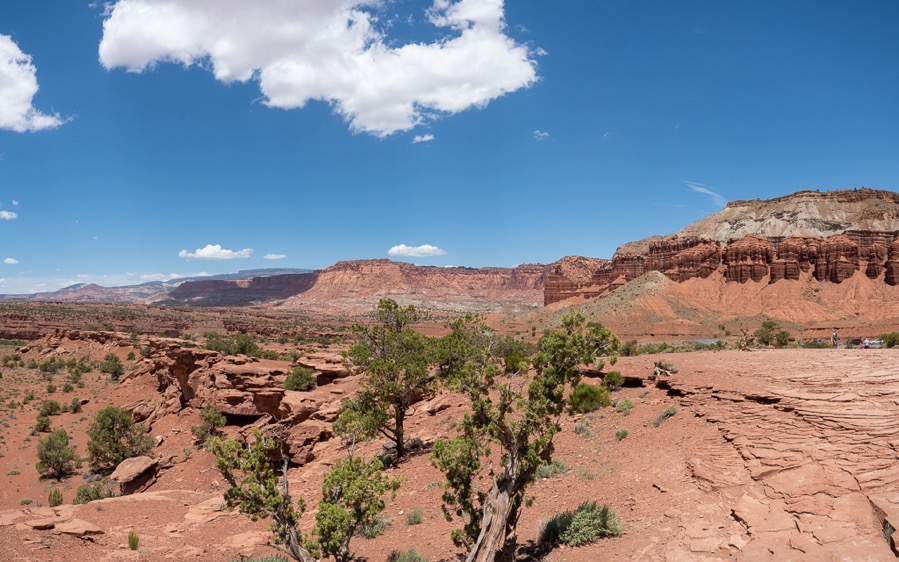 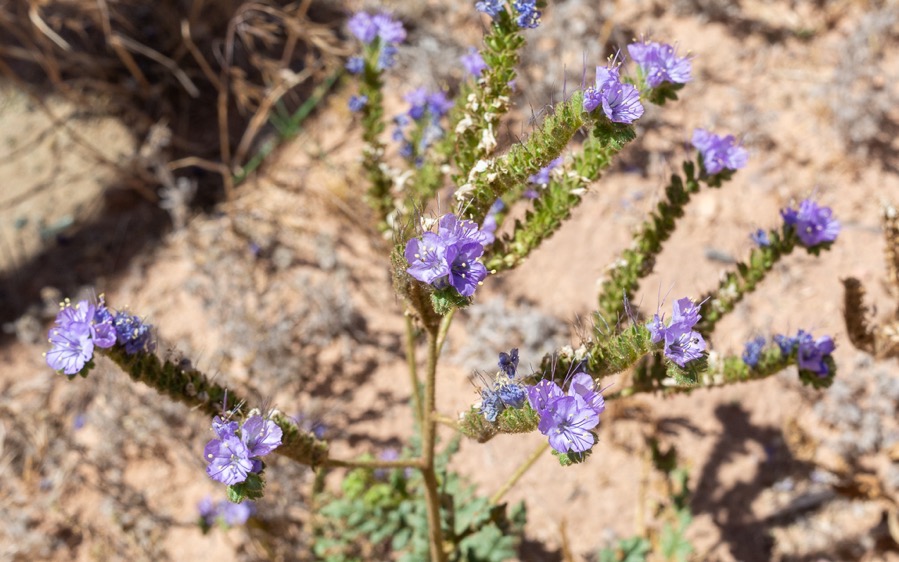 None of us could figure why…20 miles from anywhere…there was (a) a parking area or (b) why it had a marked parking sign as it was pretty obvious what it was. There is a skinny little goat track road heading to the left out of the parking area in between some of the rock formations…no idea where it goes and by this time of the day we were too tired to venture down it…and it looked even worse than Capitol Gorge Road anyway.

And that’s it for Capitol Reef National Park…again as I said it was amazingly scenic and the views are spectacular…I highly recommend visiting…but don’t go in the middle of summer as it will be hot hot.

This one is already too long…so no Interesting stuff this time.

4 Responses to High Five For The Mighty Five