Merry Christmas…or happy holidays or Kwanza or whatever holiday greeting ya’ prefer…I’m trying to be as non denominational as I can here.

It’s actually Christmas Eve as I write this…Neil and Connie went over to the 3PM Midnight Mass at St. Therese where she cantored in her beautifully festive red dress with matching heels and a spiffy green holiday scarf. There’s another Midnight Mass at 5PM…hey, there are lots of old people in Florida who can’t stay up late enough for real Midnight Mass…so Neil came home and had Happy Hour without her. He’ll run over and pick her up when it’s done…it’s only a mile from the house…and then we’ll have leftover Lobster’ Mac and Cheese from Date Night on Monday.

I can’t believe how the elites and progressives keep up with their ridiculous “do what I say, not what I do” attitude…and it’s not really limited to folks on the left…there are just waaaay too many darned idiots who expect us peons to do what they require us to do while they act like the rules just don’t apply to them. Although…I have to admit it seems that a lot more progressives, WAMM members, and Democrats are getting caught than Republicans…here’s a list of the ones that google found for me.

Yes…each and every one of the people on the above list has violated their own coronavirus restrictions, said one thing for the public while doing something completely different for them selves, or just generally been an asshole about the whole masking/social distancing thing. I know I’m not supposed to call them that…but let’s call a spade a spade and condemn them all for telling us to do one thing while ignoring the same rules and precautions they keep insisting are required for the public to minimize the coronavirus problem.

‘Nuff said about that.

We’re having duck breast for dinner tomorrow…after some home made cinnamon buns for brunch. Neil’s gone back and forth on how to cook it several times but he’s settled on sous vide and then toss it on the grill for some caramelization and color before we eat it. He pulled the skin and fat off today and put the nekkid breast in a brine overnight…then rendered the fat out of the skin because rendered duck fat is like liquid gold for cooks…and ended up with some nice crispy skin. Tomorrow that will get chopped up into duck skin croutons and re-crispied in a skillet before going on top of the duck after the application of some mushroom Madeira sauce. There’ll be baked sweet taters to go along with it and some creamed pearl onions on the side…Ima bear and it even sounds good to me…although not as tasty as a fresh elk carcass or some grubs and berries that bears usually eat. Then for gedunk afterwards…we got a choice of carrot cake or dulce de leche cheesecake…both of those came from the bakery at Publix since we only wanted a slice or two of each.

Interesting stuff found on the net…Neil got a couple wildlife photos but they ain’t been pulled off the camera card yet so I canna’ show ‘em to ya.

In case ya didn’t notice it or see it…Jupiter and Saturn almost had a conjunction on Dec 21…as they moved in their orbits they came within about a half a degree of each other…this happens about every 20 years or so but this is the first time in 800 years that it happened where people on earth could see it. And no…it’s not the Christmas Star that the magi followed to Bethlehem…it happened in AD 3 or so but since Jesus was born in 3 BC if you read that it’s the Christmas star on the interwebs it just ain’t so. Neil got a shot…but again it’s still on the camera card so I cribbed this one from the astronomy picture of the day website. 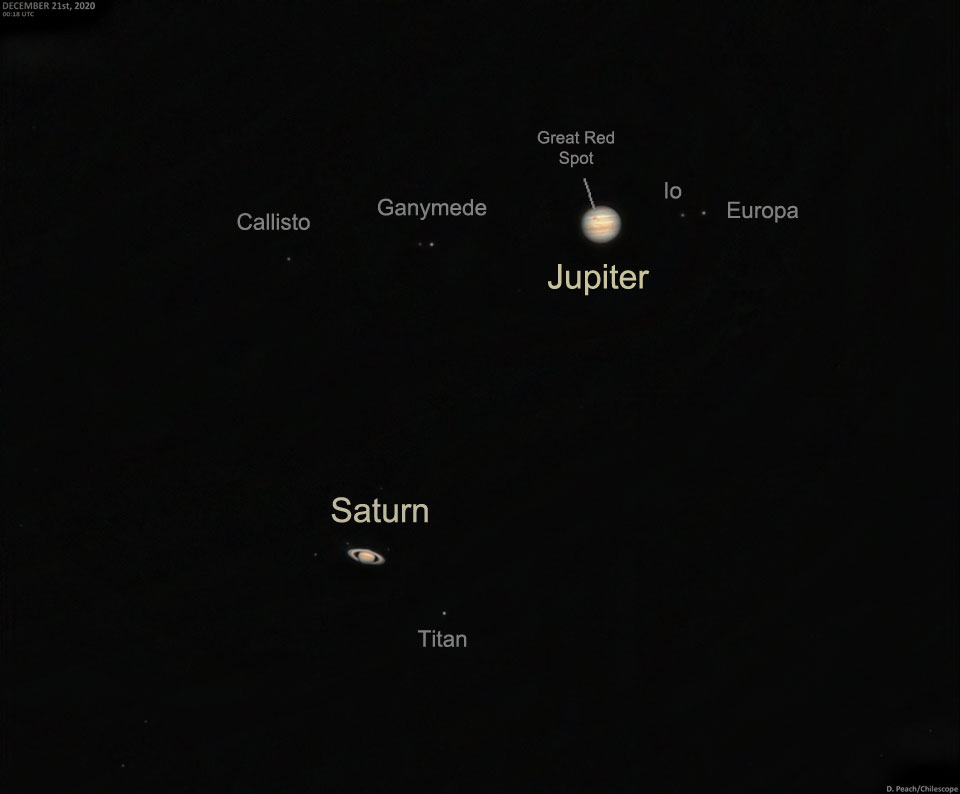 More useless math trivia…apparently some guy named Viete figgered out that this endless summation gave the value of pi…but as previously noted anything more than 15 digits or so is essentially useless…but just in case you ever need to calculate it for yourself instead of just looking at your iPhone here it is.

Cyas…gotta go with Neil to pick up Connie soon.

The full time RV travels and experiences of Gunther the Bear and Kara the Dog…along with their human staff neil and Connie.
View all posts by Gunther →
This entry was posted in Food, Homebody, Ya Can't Fix Stupid. Bookmark the permalink.