Dang…Time Flies When You’re Having Fun

Yup…2 weeks since my last post and I dunno what happened…life I guess so let me catch ya up.

The first week we did nuttin’…

Last week we had a short vacation out of town for Neil’s birthday which was on Friday. Connie had a Ladies of Elks meeting up at the Rotonda Lodge on Thursday morning so she rode up with some friends and after their meeting and lunch Neil picked her up and we headed on over to Englewood Beach and stayed at the Beach Croft Motel for 2 nights…our plan was to have dinner at the Tiki Bar on Thursday and then hit the beach Friday AM with dinner Friday night before coming home Saturday morning. That worked out excellently except for the original place we were going to eat having a shootout a couple days before so we changed our plans and ate at the Waverly Restaurant instead. Turns out the shootout was out in the street in front of the restaurant and it wasn’t involved…the shooter and shootee had an ongoing argument from months ago and picked it up at a wedding they both attended earlier in the day. No matter…the original location was pretty much a beach dive and Connie would not have been comfortable there since she was dressed up…images to follow…but the Waverly although downstairs was a beach bar had a very nice upstairs with windows overlooking the beach. They had eaten brunch close to noon in the morning after spending a couple hours on the beach before it got too hot…so weren’t really that hungry…and chose 3 appetizers instead of eating dinner. They split a plate of Oysters Rockefeller which were excellent then Neil had a half pound of shrimp…again excellent once he added some hot sauce to the cocktail sauce and Connie had crab cakes which were mostly bread with a few shreds of crab in them so not so great. They split a creme brulee for desert which was also excellent. They walked back across the street to to the motel, wandered out to the beach for sunset, and that was it for the vacation. They headed home Saturday morning since we had tickets to the Steak and Rib night at our Elks Lodge and Connie was scheduled to cantor the 0800 Mass on Sunday…so it was a pretty busy 4 days to end the week.

There’s been a lot of stupidity in the news this week…if you’re not interested in it ya can skip on ahead to the photo section below.

Last week seemed to be a really heavy duty week in the media talking about then insurrection back on Jan 6…and I’ve been thinking that insurrection might be a mite strong of a description so I looked it up…in order to convict anyone of a crime the prosecution must prove beyond a reasonable doubt each of the elements of the crime as listed in the appropriate statute. Looking up the elements of insurrection and the elements of sedition in the Code of Federal Regulations here’s what it says.

Whoever incites, sets on foot, assists, or engages in any rebellion or insurrection against the authority of the United States or the laws thereof, or gives aid or comfort thereto, shall be fined under this title or imprisoned not more than ten years, or both; and shall be incapable of holding any office under the United States.

So let’s look at what actually happened. The President had a rally in which he never said to invade the Capitol…he said to march down there and protest. Yes…he mentioned the word ‘fight’ but just like when a football coach tells his team to ‘fight’ there is more than one definition of that word. Some of the crowd went home and a bunch went to the Capitol to protest…on the order of 2,000 to 3,000 based on estimates I’ve seen but the actual number isn’t relevant to the discussion…and some number of those people went inside the Capitol…and some number of those were either carrying firearms which were not used in the incident or used fire extinguishers or poles or whatever to smash windows. Remember…a grand total of 5 people died either during the incident or shortly afterwards…4 of those were of natural causes…and one person (a protester) was shot and killed by a member of the Capitol Police…no shots were fired by any of the protesters.

Were these people in rebellion against the laws of the US or its authority? Possibly they were but a more reasoned evaluation might indicate that they were merely protesting the certification of the Presidential election.

Were they conspiring to overthrow, put down, or destroy by force the government…levying war against the government…or by force delaying the execution of US law…or possessing any property of the US. The first two I think not but the last two you might be able to make a reasonable argument that they were delaying the execution but then one gets into the definition of ‘force’ and the definition of ‘possessing’ the property of the US.

However…let’s consider the uprisings out in Portland, Seattle, et. al. What really happened there? Again…there were a large number of protesters at a rally…and some number of them turned violent, seized federal buildings and city buildings, looted, burned, were armed with firearms (although they were mostly not used), attacked police and destroyed police/city/federal property.

All I’m saying is that if the people on Jan 6 committed insurrection or sedition…the BLM and whatever other protesters out in Portland and Seattle did as well…since looking dispassionately at the facts both groups essentially committed the same crimes. Most of the people at both protests were peaceful and did not participate in the law breaking activities…and those that did committed the same crimes. The fact that one was in DC at the Capitol and one was in Portland at the police precinct makes no difference to the words in the statute about force, possessing, or waging war.

Over in one of America’s most dangerous cities…Mayor Lightfoot of Chicago has announced that as she comes up on her two year anniversary of taking office she will ONLY grant interviews to ‘reporters of color’…her words…because of the ‘overwhelming whiteness and maleness’…again her words…of the Chicago media. This is an elected city official going on record that she will be racist and only grant interviews to black or brown people. Democrats and liberals are insisting that this isn’t racist at all but justice. But again folks…let’s get real…judging whether you will give a reporter an interview based on the amount of melanin in their skin…is purely and simply making a decision based on race…and if the police are racist because they pull over black motorists based on their blackness…then she is racist in granting interviews based on the blackness of the reporter’s skin.

Moving onto something a little lighter…but just as idiotic…

From the
Wall Street Journal…out in the PRC they want to cancel Math class apparently.

What the heck is wrong with these people? Math is math…and the answer is either right or wrong…and if the student gets the wrong answer then he/she needs more instruction to understand how to get the correct answer. Turning out a generation that believes the right answer is irrelevant will only ensure that they don’t get into better colleges, get an education, and enable themselves to get decent jobs.

Educators can argue about social justice and white supremacy and all that other crap all they want to…but they’re forgetting the sole and essential purpose of the educational system. It isn’t to produce social justice warriors and it isn’t to overcome this supposed white supremacy culture. The purpose…the only purpose…of school systems, teachers, and administrators is to educate the children…and turning out students illiterate in math is beyond doing them a disservice…it borders on criminal negligence in my opinion.

And it’s not just California…it’s everywhere. In Fairfax VA…where we lived before starting our RV life…the preeminent high school is Thomas Jefferson and it has for years required an admittance test and only the best and brightest are admitted. As it turns out…students of Asian descent are the largest portion of the student body because they are culturally encouraged by their parents to reach for the stars, get an education, and excel. Nope…not any more…apparently the admission test is being eliminated and it will become just another high school rather than one filled with gifted students of all races and ethnicities.

Ok…let’s see some images…these are taken (mostly) with Neil’s new mirrorless Nikon Z7II camera body and those that weren’t were with Connie’s Z50, the smaller mirrorless body she carries.

Great Egret out back of the lanai. 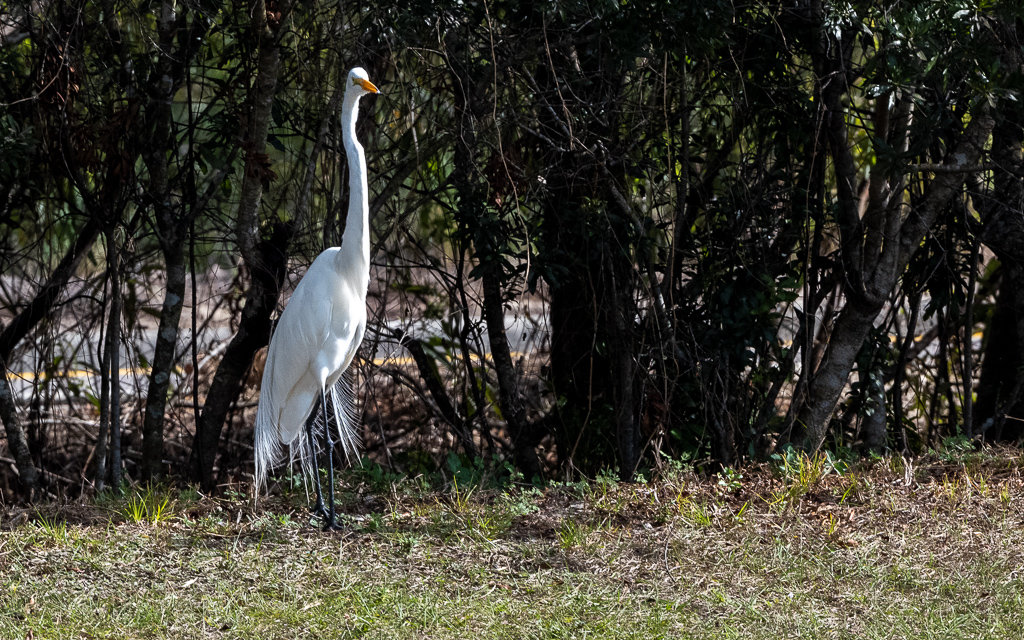 Butterflies or moths…I can never tell or remember the differences. 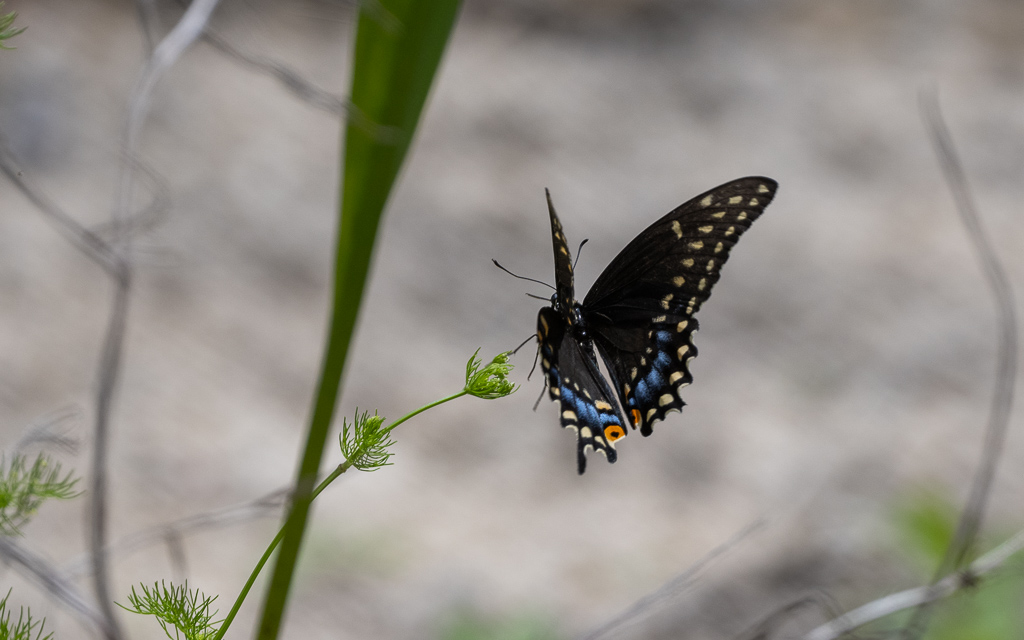 Sea oats our first night at the beach.

Turtle nest…Neil saw the Turtle Patrol ladies both mornings he was out early…they come out to find and mark off new nests.

Sea oats from a better angle without the condo in the background. 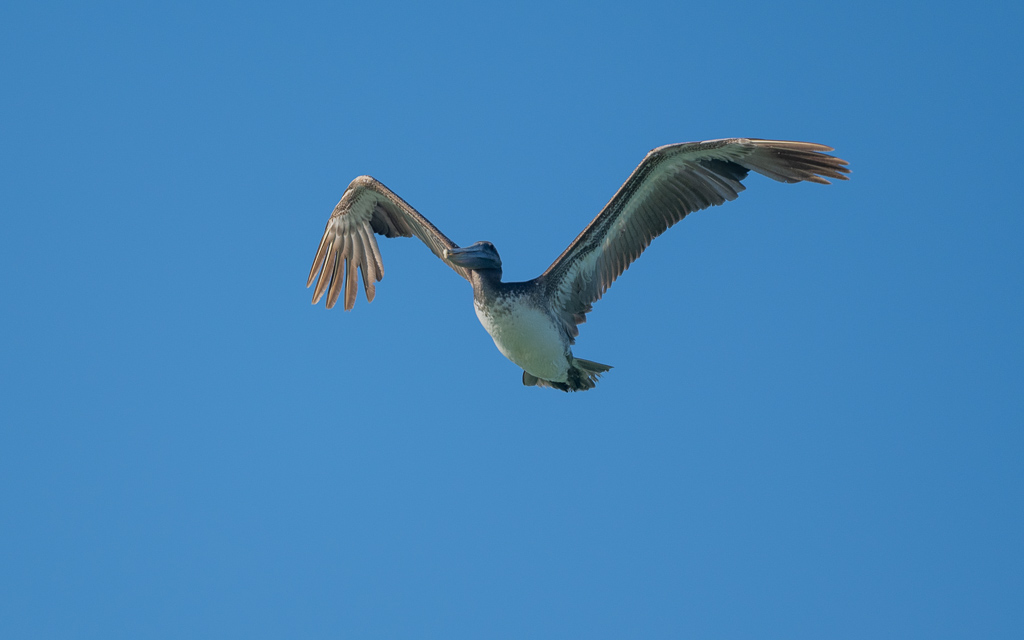 Herring gull…somewhere between the juvenile and adult plumage.

Great Blue Heron…an uncommon site at the beach as they usually stay in fresh or brackish water areas. 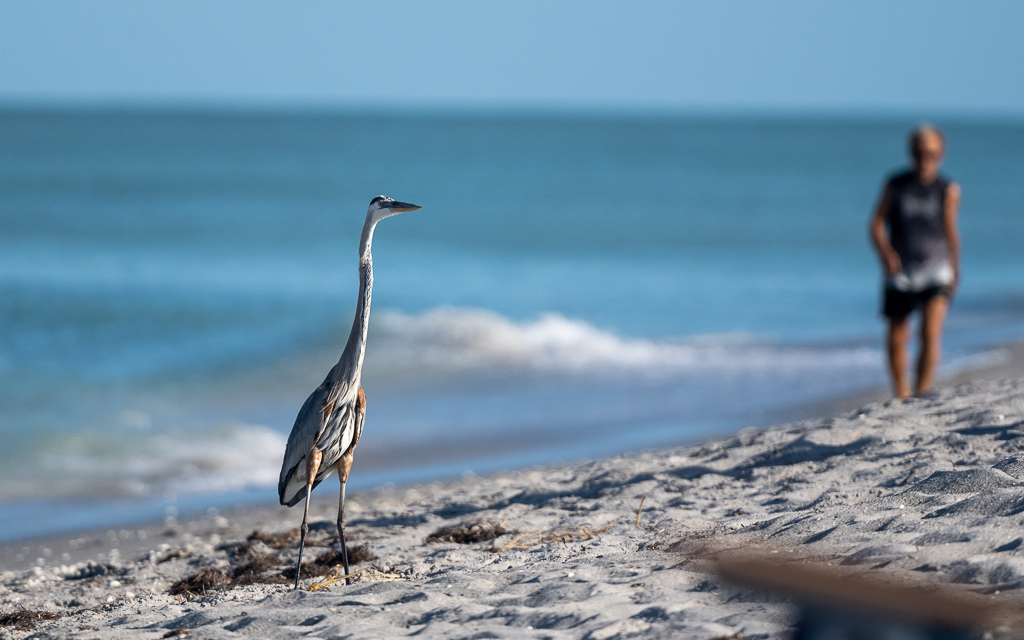 Jogger scared him off.

And off he goes between the sunbathers. 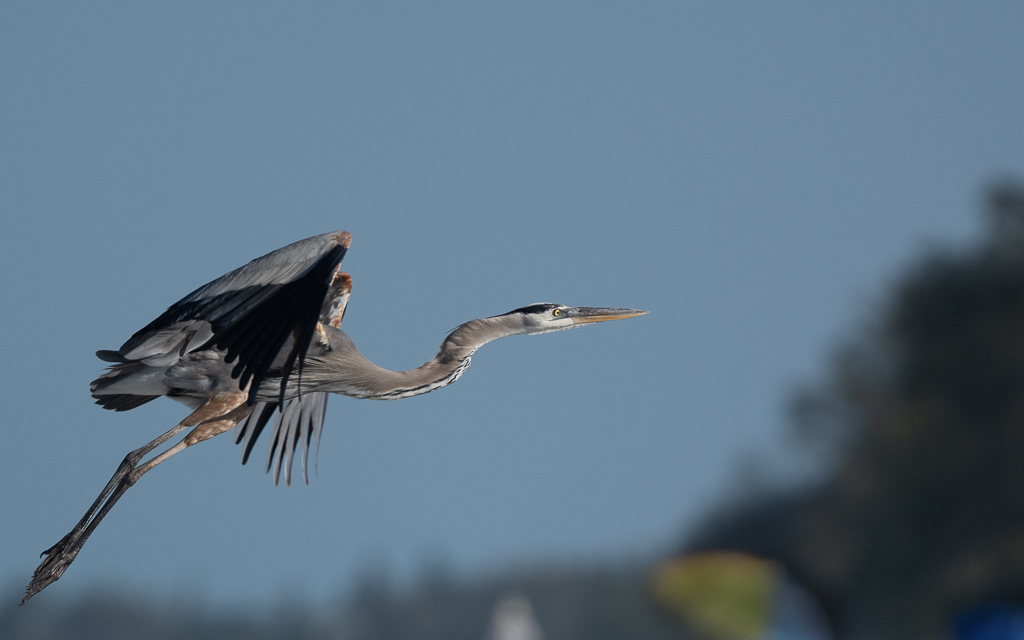 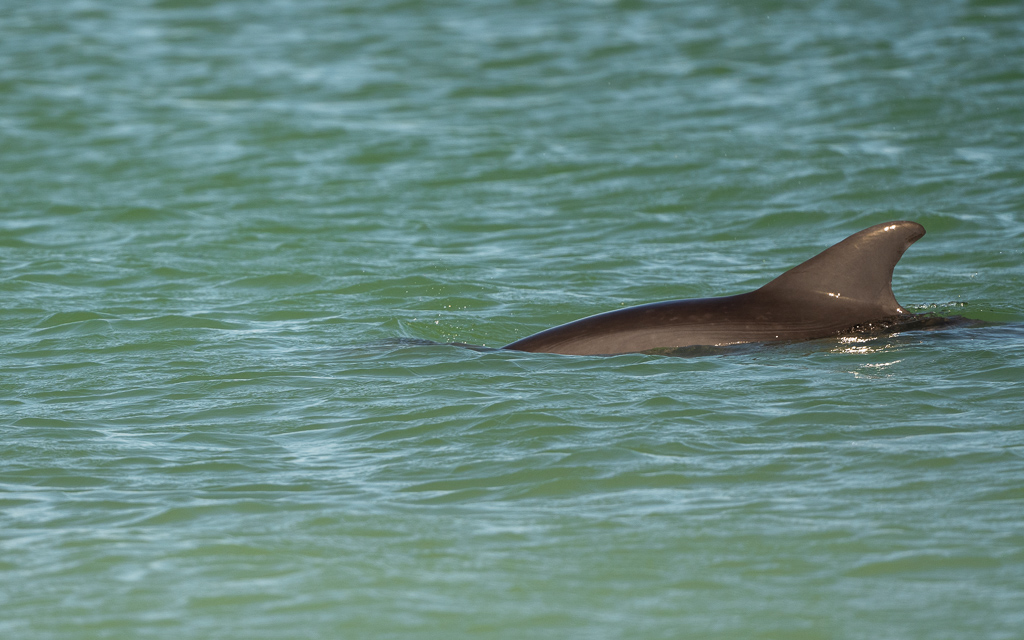 The best dressed lady on the beach at our second sunset…she left her heels in the motel room. 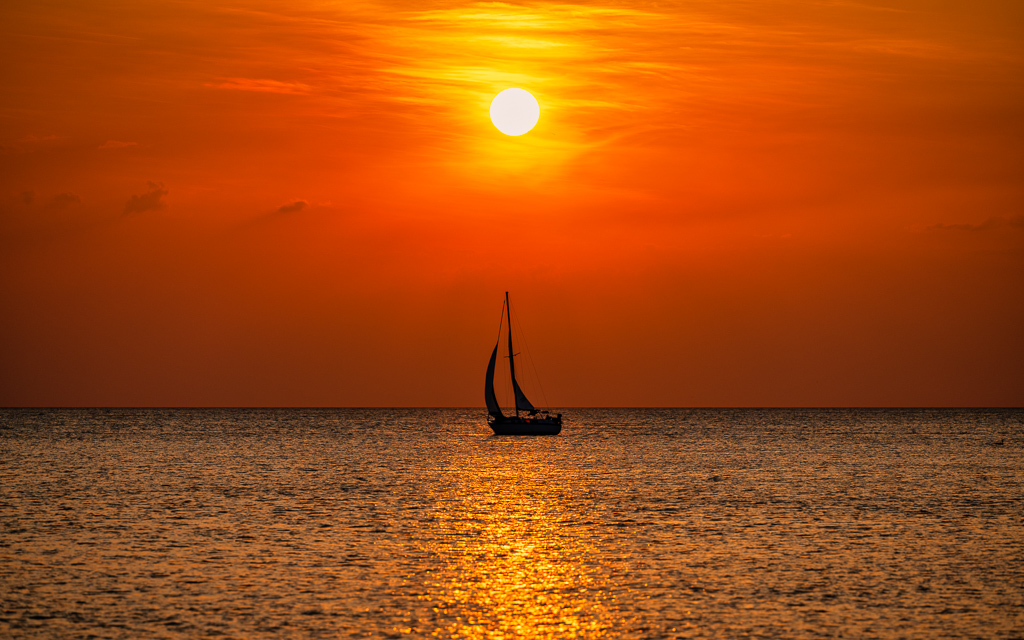 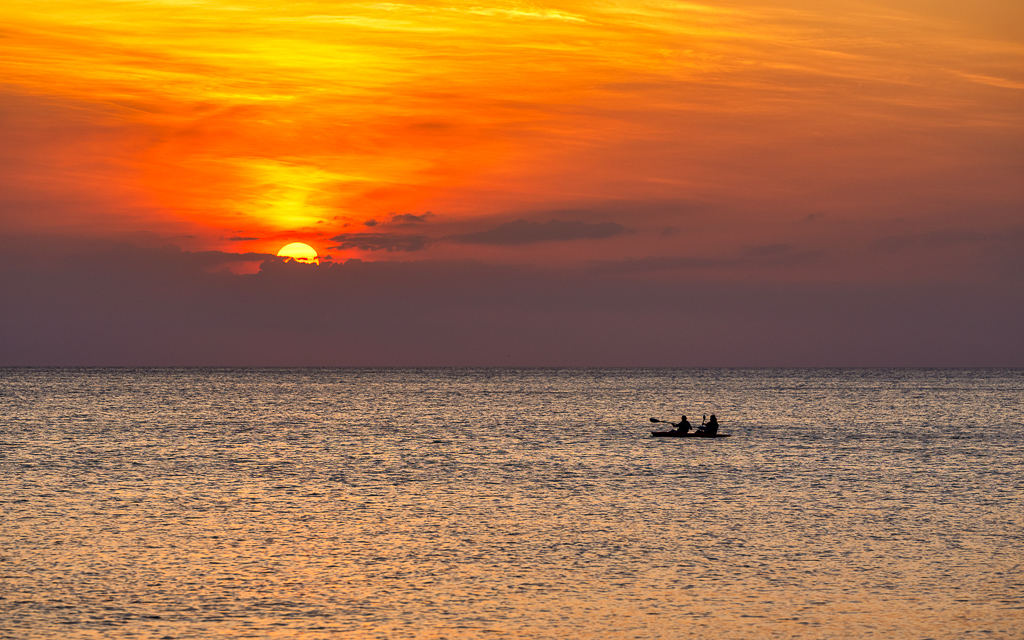 Sitting in the chair outside The Waverly…this was before the sunset and beach pictures above. 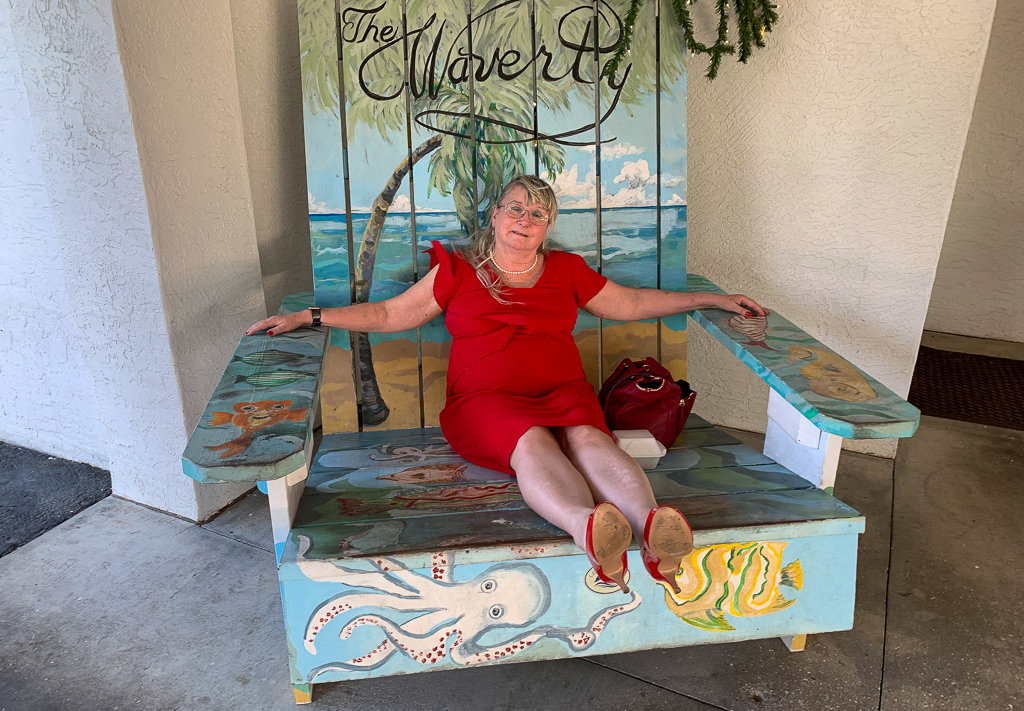 Shell sculpture at the entrance to Englewood Beach where you come onto the island…we took this as we left the island and headed home. 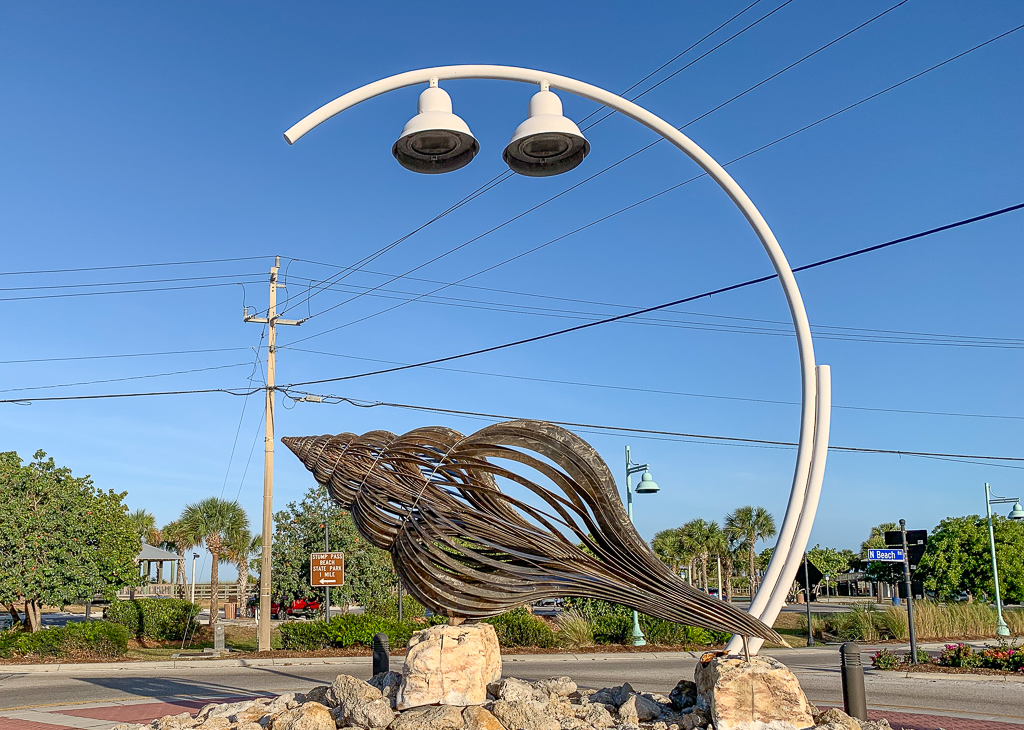 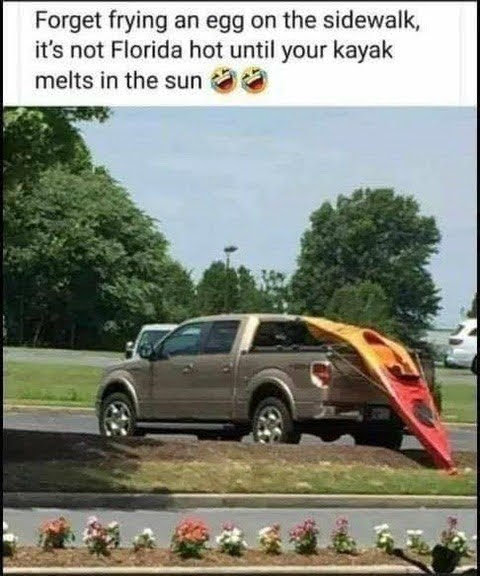 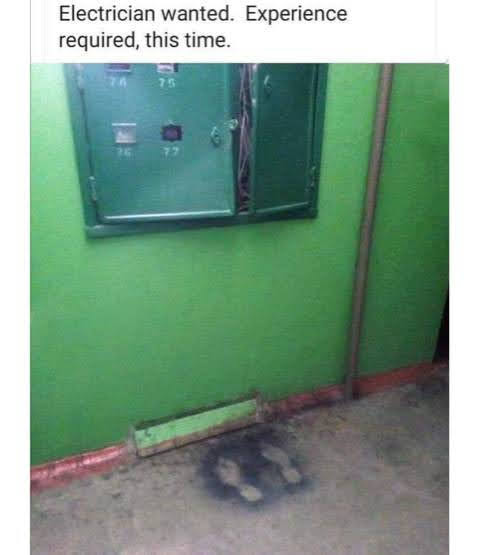 Found the next two in the gift shop at Englewood Beach.

Then there’s this 39 digit number which is the sum of the 39th power of each of its digits…math people must be really bored to worry about figuring stuff like this out…but I guess if the PRC gets its way and outlaws getting the right answer then math people figuring out stuff this will eventually become a thing of the past…since nobody will know either what the 39th power or a digit is or how to add the results up correctly.

The full time RV travels and experiences of Gunther the Bear and Kara the Dog…along with their human staff neil and Connie.
View all posts by Gunther →
This entry was posted in Reality Based Blogging, Travel, WIldlife, Ya Can't Fix Stupid. Bookmark the permalink.