The Narrows and Kolob Canyon

Tuesday we were up early…0500…for our 0630 planned departure from the rig. With a 30 minute drive to the Zion Visitor Center and a 40 minute ride on the shuttle up to the Temple of Sinawava where our planned hike started. Our plan was to do the 2 mile round trip on the Riverside Trail and then wade into The Narrows a bit and get some cool photographs.

The Narrows is the second signature hike at Zion…and consists of several options. The gorge itself ranges from 30-100 feet wide and 500-1,300 feet deep from the rim to the river depending on location within the gorge. The complete hike is 16 miles and you’re hiking in the river for most of the time…there are numerous sections that are chest deep and several that require swimming. For us…that goes beyond Fun Stuff© into stupidity so we decided to pass on it. What most people do is hike the Riverside Trail and then go into the first section of The Narrows and wade upstream until they get tired of it and turn around…that gives you a bit of the flavor of them and allows getting photographs without risking life and limb. This is a dangerous hike…not because of the wading or rocks although they’re not trivial…but because of the possibility of a flash flood. Like other slot canyons in the west…you can be hiking in knee deep water one minute and within 30 seconds you’ve been inundated with a 12 foot wall of water filled with debris. Rain anywhere upstream can quickly raise the water levels while it remains clear and brilliant blue skies where you’re wading. Given that…and our non-interest in a 9 mile hike in the river bed which would take many hours…we just did the amuse bouche version of the hike (for those of you who may not be familiar with the French term or who don’t eat at high enough class restaurants…an amuse bouche is a single bite appetizer usually served in fancier eateries just after you sit down…it’s whatever the chef felt like making today, isn’t on the menu, and is included in the price of your meal…but it’s just a tasty bite or two at the most. Actually…we don’t eat at high enough class restaurants to get one regularly either.) National Geographic rates this is the 5th best adventure in the US…there are actually 12 campsites located in the canyon built by the park service…they’ve been constructed in areas above the water so you will survive a potential flash flood while you’re asleep…although it’s only 16 miles it’s really a 2 day hike due to the wading in the water, swimming, and slow going generally.

We arrived at the parking lot at the Temple of Sinawava just before 0800 and it was still cool…70s max…and shaded within the Gorge. The Temple of Sinawava where the road ends is a half mile or so wide spot in the canyon with walls about 3,000 feet wide. However, once you start up the trail alongside the Virgin River (actually the North Fork of the Virgin River to be precise…according to Wikipedia only the East Fork and North Fork exist…looking at the watershed map it empties into Lake Powell south of Zion and after passing through Zion over to Mount Carmel it splits into the North Fork and East Fork).

Before I really get into that…I need to respond to reader Ron (actually Neil’s older brother) who had a question about the grade on Walter’s Wiggles. They rise about 500 feet over about 400 feet horizontally…so it would be a 50 degree or so slope except for the switchbacks. Here’s a couple of shots so you can see what I mean. As you can see…they’re pretty steep and from the second photo you can see that each switchback is 50 feet or so long so it’s probably only 20 or 25 degrees actual grade. There’s another section of switchbacks further back on the trail up…they get you part way up the canyon wall and then the Wiggles get you to the West Rim trail…you continue out that a bit until you get to Scout’s Landing where you can either get some photos and head back down or you can head out the spine of the fin to Angel’s Landing with the 1,000 foot drop-offs on each side of the narrow trail that I showed the pictures of the other day.

Heading upstream we took 30 or 40 minutes to get to the end of Riverside Walk. Connie took a look at the river and quickly decided she wasn’t wading upstream. The water was ankle to mid-thigh deep on Neil and flowing pretty quickly at 6 or 8 miles an hour. There are bowling ball sized cobblestones forming the river bottom and the flow of water over them combined with her lack of depth perception quickly convinced her she would end up falling in so she stayed at the end of the Riverside Trail and Neil hiked/waded 500 or 600 yards upstream after donning his water shoes so he would have dry hiking boots and socks on the way back. Many nice photos were taken and after 40 minutes or so he was back at where Connie was waiting. After a quick snack and changing into dry boots we headed back to the parking lot and boarded the bus. We stopped by Zion Lodge and had a burger for lunch…we were going to eat in the dining room but it wasn’t open yet and we were too hungry to wait 20 more minutes for them to open. After lunch we headed home to rest for the hot part of the day. We definitely noticed that between the end of the Riverside Walk trail and the campground in Virgin that there was a 10-15 degree temperature difference.

An Usie at the Hanging Gardens. Hanging gardens are formed where there’s a seep…a seep happens when water filters down through the porous limestone and then runs into a non porous layer of rock where it turns sideways and seems out the side of the canyon wall…it forms a wet spot and plant life takes advantage of that…I know there’s a joke somewhere in that wet spot line and that wise ass bear woulda not only found it but put it in here…but I’m trying to rise above low brow humor and maintain decorum here yaknow. 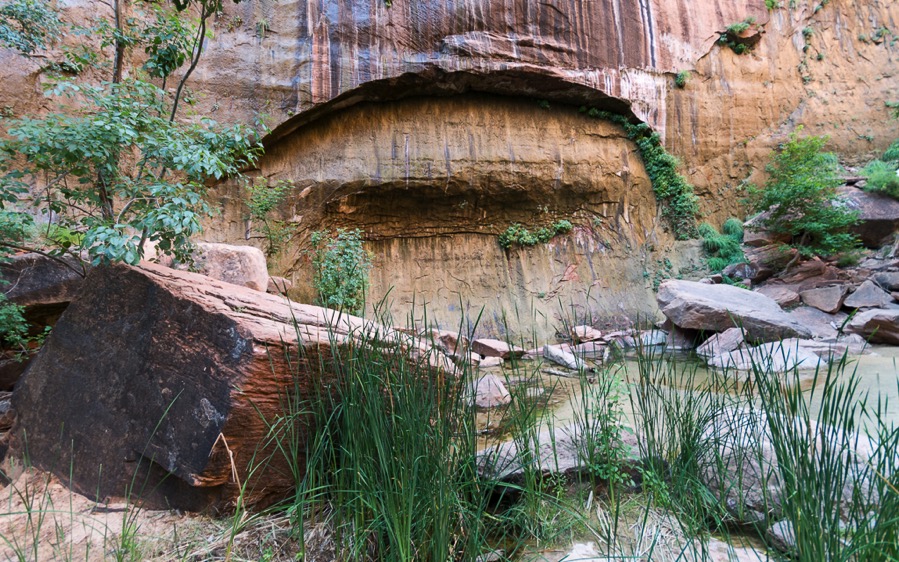 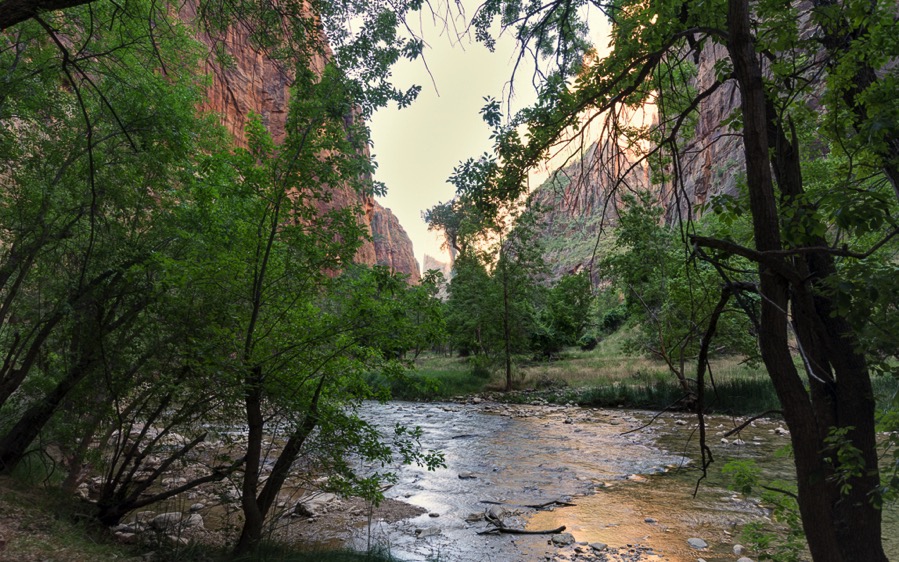 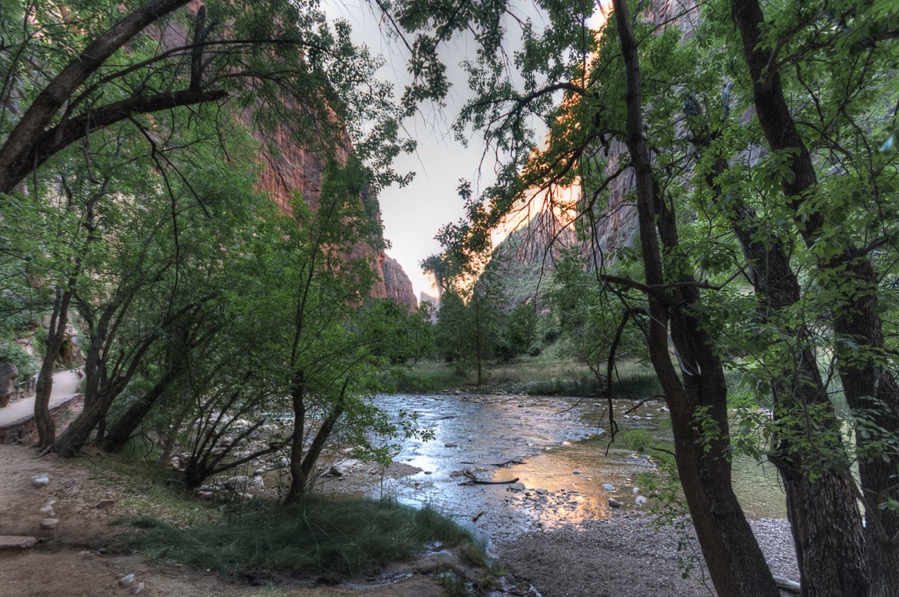 And he’s off…into the river.

Connie got some shots while he was gone. 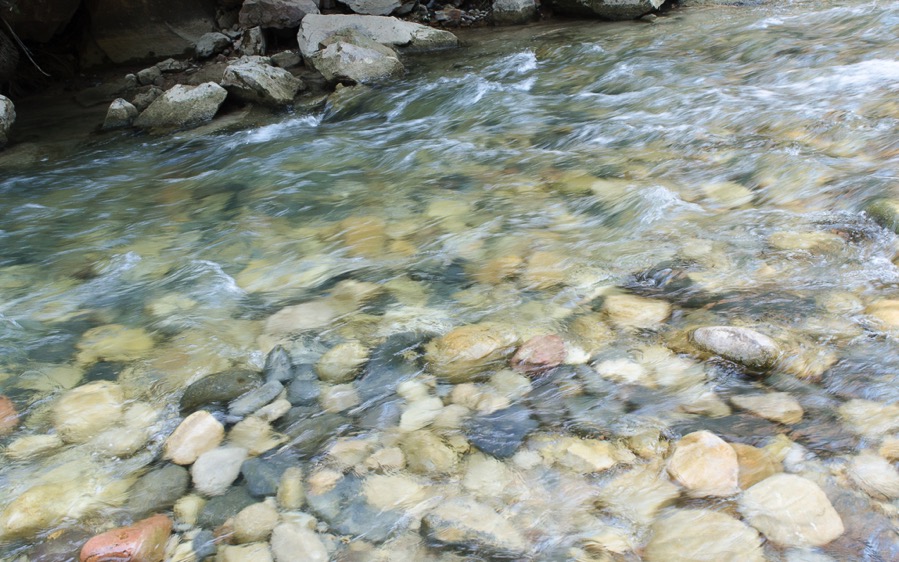 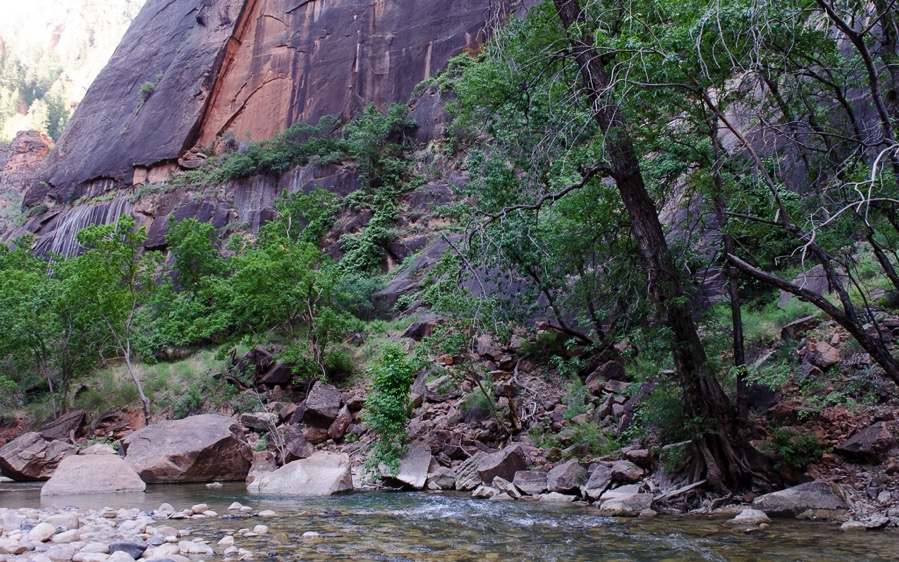 Some of these have people in them…some don’t. The reasons vary…sometimes I left the people in for scale, sometimes Neil carefully waited until there we no people in his shot, sometimes I carefully cropped them out, and sometimes I used the Magic People Remover© software to just get rid of ‘em. 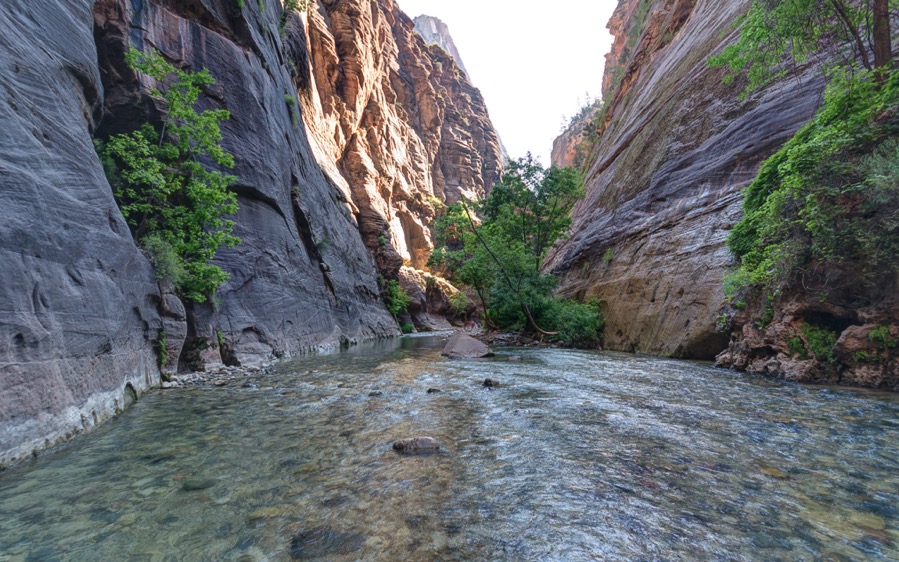 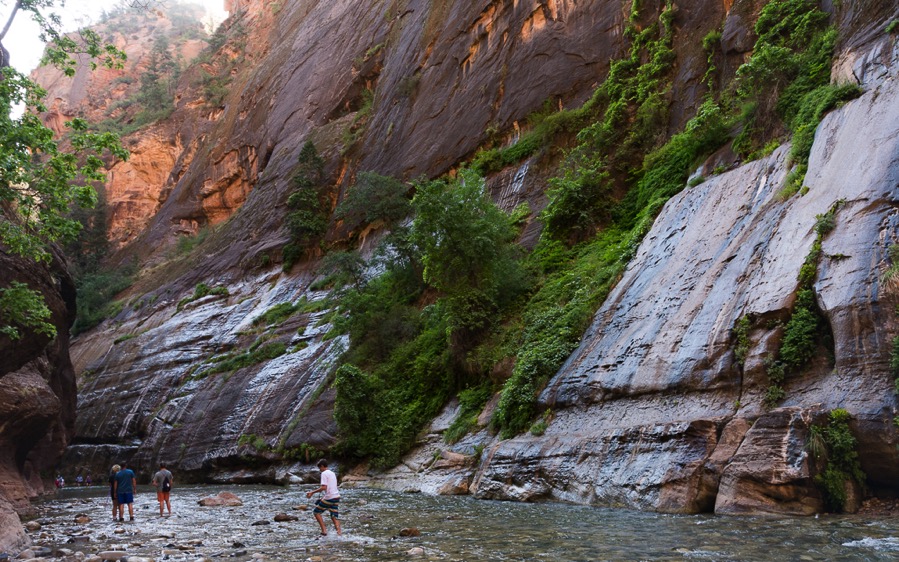 One of my favorite shots of the day. 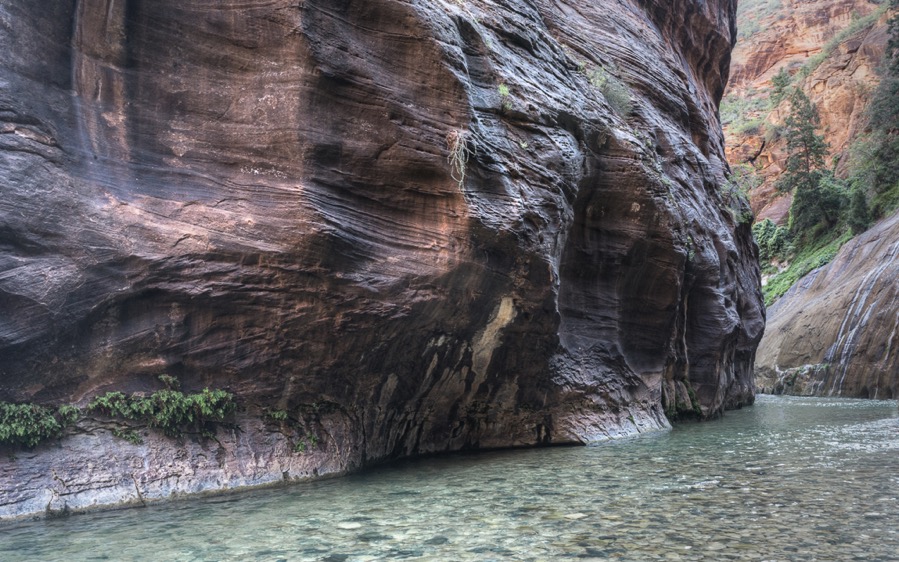 He was begging for food…we didn’t give him any…after all it’s a $100 fine if you do. 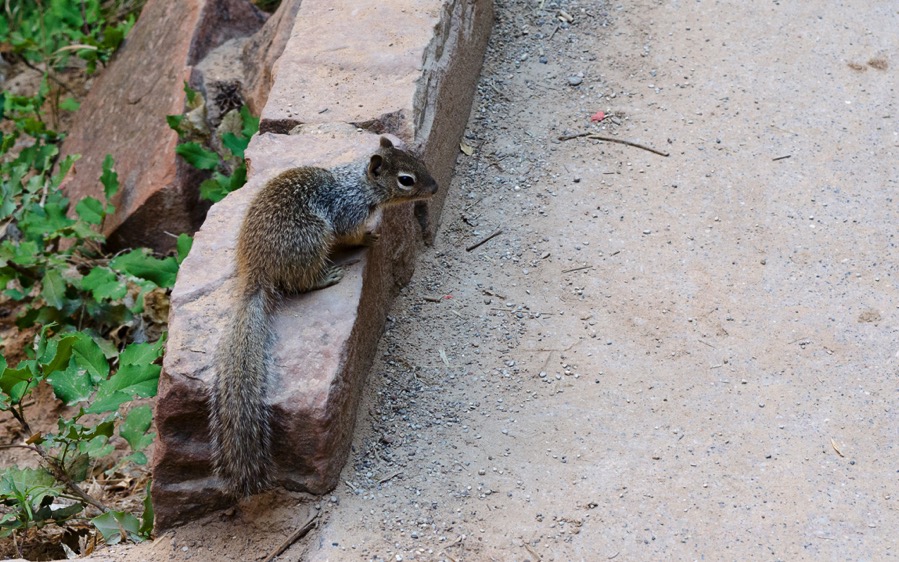 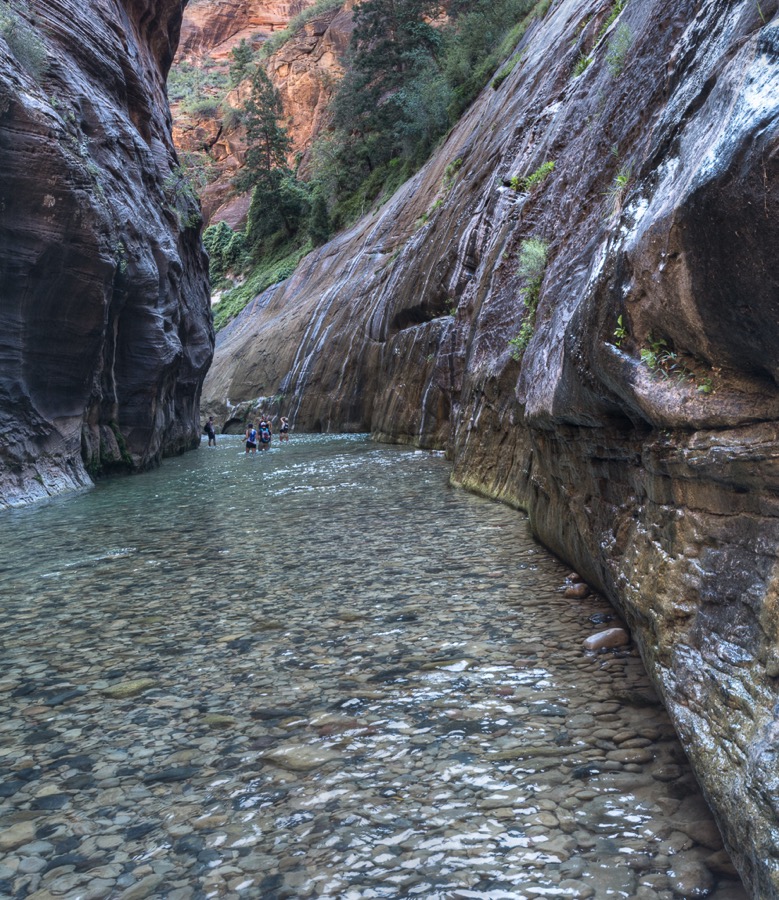 If he had gone just a little farther up the canyon…he would have gotten to what’s called the Wall Street section…but unfortunately his feet were starting to hurt from the rocks…so he’s glad he headed back. Here’s a couple of shots I cribbed from the internet so you can see what this section would have looked like.

On the way back we ran into a couple small waterfalls…so Neil broke out the tripod and got some shots. 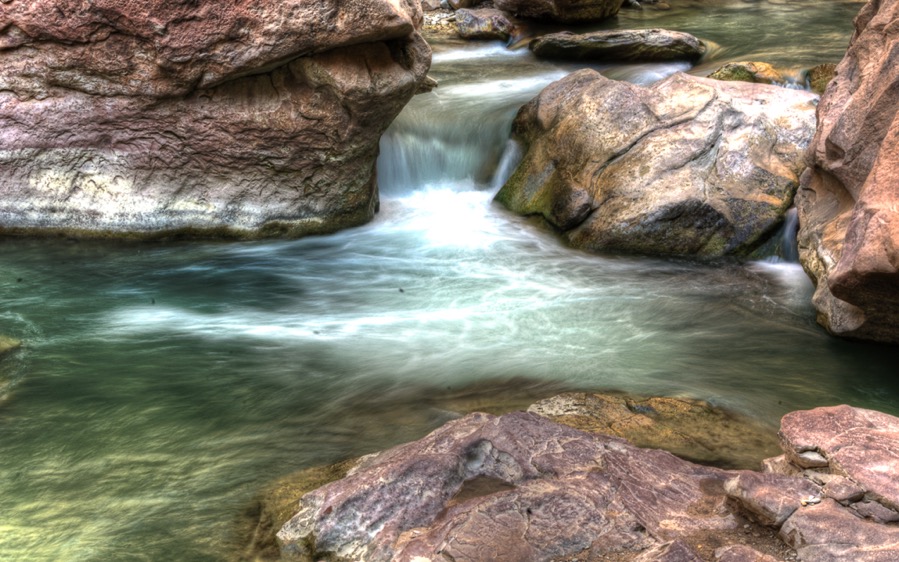 Wednesday we just had a quick driving tour…25 miles or so up I-15 to the Kolob Canyon portion of Zion…stopped by the visitor center and got the stamp in our National Park Passport as they have a different one than the main visitor center does…and then took the 5 mile mostly straight up scenic drive up to Kolob Canyon Viewpoint. Got some photos and headed home for all the pre-travel day stuff in the afternoon as we’re traveling to Salt Lake City tomorrow. The views at Kolob are more of looking at a bunch of what are called finger canyons opening out to a plain.

An Usie at the overlook.

Connie took this one and Neil HDRed it…I think it’s the best shot of the day. Both of the following are of Timber Top Mountain on the left and the little point sticking up at the right end is the 6,995 foot Shuntavi Butte…although to us it looks like it’s still part of Timber Top…but what do we know. 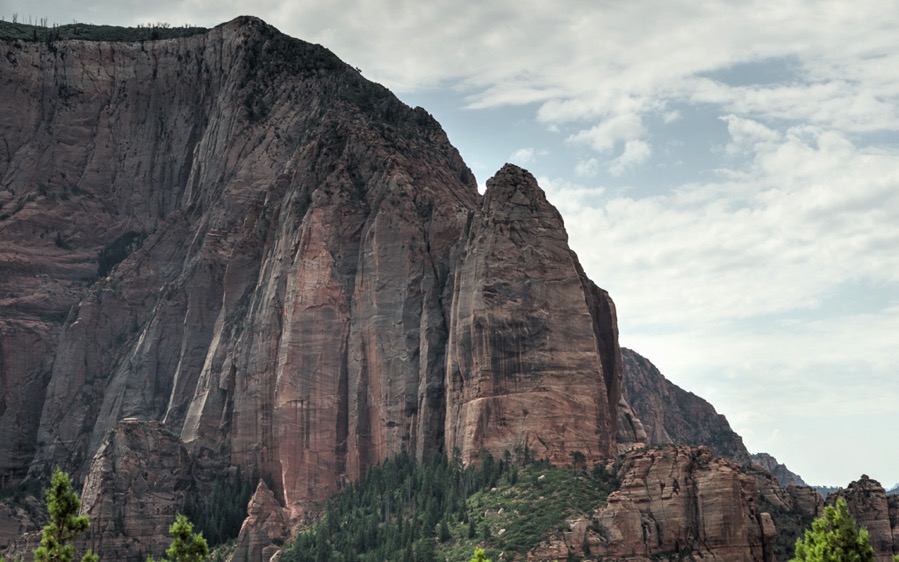 Neil’s version of the shot above…he was using his really wide angle zoom and left the closeup to Connie…both are good but we all like hers better this time.

Never do a photoshoot in a brown dress. 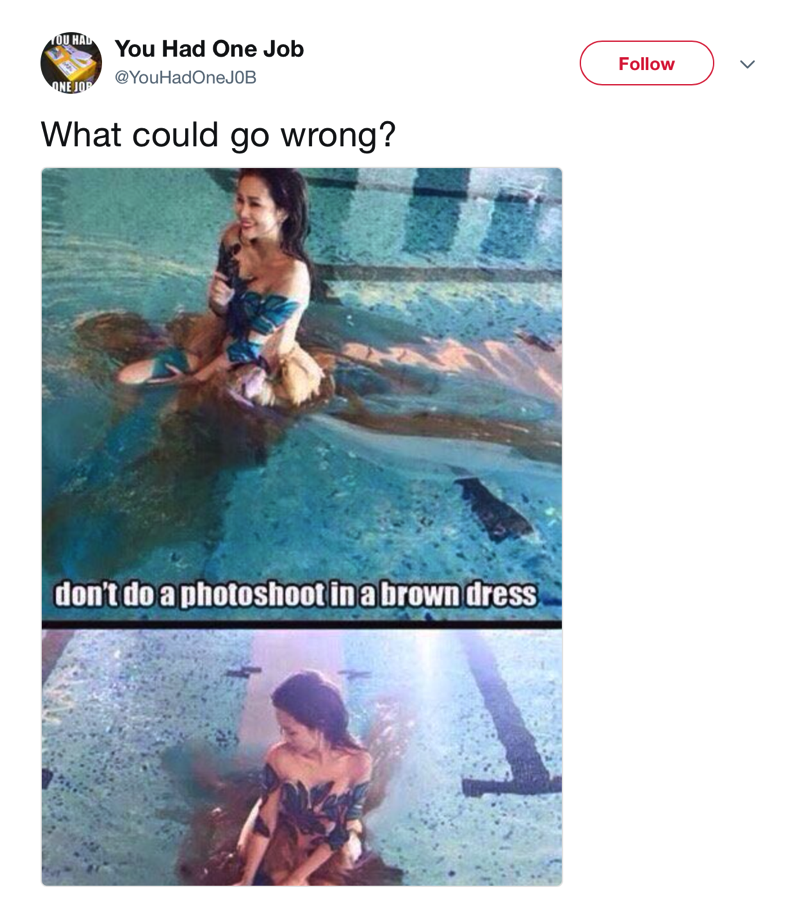 I’m thinking that Grandma wasn’t real popular with her family.

The Boeing Triple 7 has a crucial design flaw. This entry was posted in RV, Travel. Bookmark the permalink.