Another Day…With Not Much Goin’ On

I guess the title really says it all…nothing at all going on round here at Long Pond Road…although to be fair we did have a couple of wildlife sightings and it was warm enough on Friday evening to cook outside on the lanai so mebbe it wasn’t so much of a bust as I thought.

We did have some excitement on Thursday…in Heron’s Glen which is the gated community immediately north and bordering onto Magnolia Landing where we live…a 27 year old woman was ambushed
according to the headline by a 10 foot 4 inch gator while she was trimming trees near the lake. What actually happened was she was trimming a tree…wasn’t watching around herself which is a bad idea since this is Florida and gators and snakes are pretty common in the environment…and got too close to the gator which bit her on the leg and then apparently let her go and did not try to eat her as it retreated to the pond nearby. It was subsequently trapped and removed to a gator farm as a nuisance gator…this is only interesting as it was essentially right next door to us.

Since we have 3 gators most of the time in our pond…nothing really a big deal about this. We do have 2 rules though…we don’t go outside the lanai in the back after dark…and we don’t go into the garage without turning the light on and looking first. There are rattlesnakes in the prairie/swamps around the neighborhood and also cottonmouths…and they are occasionally seen in the neighborhood…so it behooves us to look before we walk just in case the snake came into the garage to escape the head and stay away from the water at night.

A couple other examples of stupidity in the news.

Out in Portland…the mayor…who is also the police commissioner…has ordered the police department not to use tear gas to disperse crowds even if they declare a protest to have become a riot. Since we’re now well over 100 nights in a row with protests, riots, burning of businesses, attacks on both police and police vehicles…I wonder just what in the hell the mayor thinks the police should do to curb the riots…maybe he thinks they should just ask the rioters pretty please to go on home. If I was the chief of police…I would just have to let the riots and destruction continue and not put my officers in danger by sending them out.

Speaking of riots…I read on the news yesterday that…at least according to the WAMM…none of the violence has been perpetuated by the peaceful protesters…it has all been either white supremacists or police that caused all of the violence, burning of businesses, snd attacks on monuments they don’t like…although why police and white supremacists would attack a monument that the BLM hates escapes me.

Out in the PRC…Governor Newsom has declared that climate change is no longer a theory but is a proven, established fact of settled science in CA…since they have a lot of wildfires. The problem is that the governor is full of crap. While heat and drought have probably contributed to the extent of the fires…the mismanagement of fires, woodlands, and the refusal of the state to allow some forest management practices…like controlled burns or allowing fires that do not threaten people or property to burn themselves out rather than putting them out…that have been well proven in other states to minimize the amount of out of control fires and property damage. Forests by their very nature depend on fire to keep the fuel on the forest floor down…and mismanagement of fire policy by the state is certainly a bigger contributor to the current problems out there than climate change.

While it’s clearly true that in the short term (the past 50 years or so) it has gotten warmer…despite the claims of the tree huggers that climate change is settled science…any real scientist knows that there is absolutely no such thing as “settled science”…in the long term it cannot be conclusively shown that the recent increase in temperatures is due to use of fossil fuel by humans, volcanic activity, or just the normal cyclic variance in climate that has happened for hundreds of millions of years. All of the folk that claim this is “settled science” had already made up their minds before they did any research…and they take very, very limited and unknown accuracy data of temperatures 100 million years ago…and fit a curve to match their preconceived notions. The trouble is that there are no unbiased researchers into climate…every one either believes that mankind is solely responsible or that mankind presents a negligible effect and shape their conclusions to match their beliefs.

The simple fact is that we have no real, accurate data to base any conclusions on…and thus any conclusion either way is highly suspect. The second simple fact is that…even if we knew with 100% certainty that human activity was the sole cause of climate change…what would or could we do about it. All of the agreements that are forced onto governments by climate justice warriors require the developed countries like the US to eliminate emissions while China continues building coal power plants by the dozens and countries like Brazil and India are completely exempted from doing anything. Even if the US reduced our emissions to zero…which is scientifically, technically, and economically impossible…emissions by China…who refuses to reduce their emissions…and by the exempted countries would still cause carbon dioxide levels to increase.

Despite this…the WAMM is demanding that we spend trillions of dollars we don’t have in the US to eliminate all fossil fuel use, require only electrical cars, not to use nuclear power, and do everything with solar or wind power. They haven’t explained how we’ll use solar power at night…and they haven’t figured out that we would need trillions of dollars in infrastructure spending to get transmission wires which currently don’t exist from the places in the country where solar and wind make power…all of those flyover states ya know…to their coastal liberal cities. Not to mention…even more trillions of dollars to build the solar and wind plants and legislate scientific progress to make solar work at night. I guess they’ll just have to pass Ms. Warren’s wealth tax through congress…never mind that it would (a) be obviously unconstitutional as that document requires that taxes be distributed according to population and (b) the likelihood that the government could accurately evaluate the wealth of a person who has a privately held business and a lot of artwork annually is basically zero.

Oh yeah…we did get a few nice shots this week out back.

First up…a couple of shots taken very near dark one evening of a complete rainbow behind the house. Connie originally saw the dark trees that were still lighted at the top so Neil went out to take a shot for her…and then he noticed the rainbow.

Yesterday…he spotted this Little Blue Heron across the pond…they’re about 2 feet tall…and got a shot. 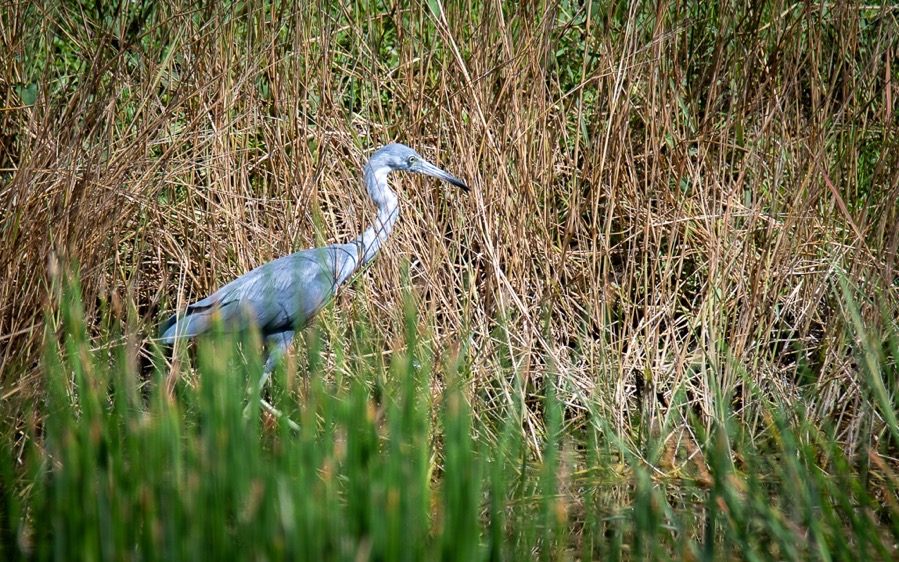 Today…as he got finished with his bike ride he spotted a Great Blue Heron across the pond…he passed our street and went down to the clubhouse to cool down from the ride effort and spotted it from the main road through the development as he came back. So he grabbed the camera and snuck around the house to get the image below. Great Blue’s are about 4 feet tall…this one is starting to get breeding plumage so it’s most likely male as they change a lot more than females for the mating season…which for most of the waders is late fall down here in FL. They never get as much or as beautiful plumage as the egrets do but they do get some. I’ll look back and I think I have some photos of them in full mating regalia in the Lightroom catalog that I can post next time along with a side by side of mating and normal plumage. 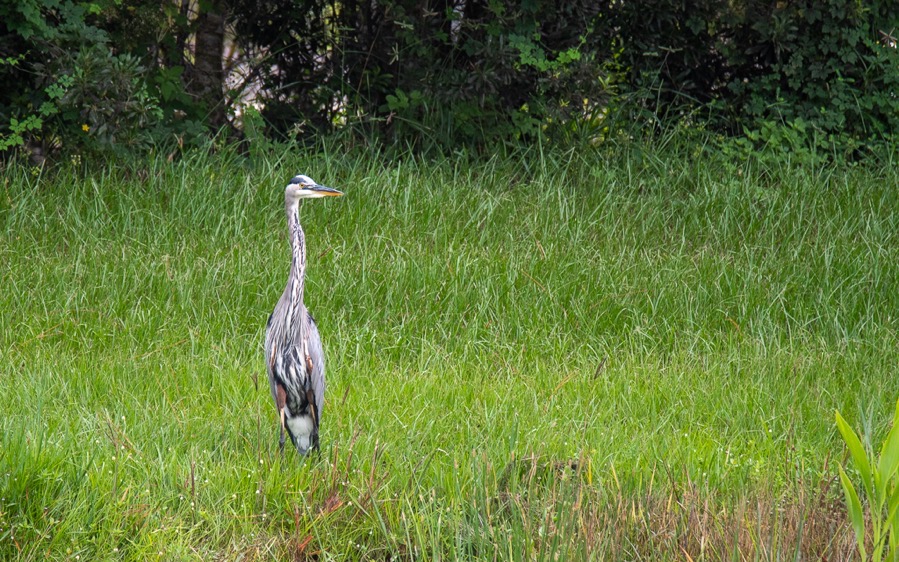 It looks like the wildlife is starting to come back based on the last week or so…and it has been a bit cooler so maybe we’ll keep seeing more and more of it. Still haven’t seen any of our gators since the water level in the pond came up…we briefly spotted one of them a week or two ago but that’s about it.

One last one…this is a repost of one of our local eagle pair…they’re back at the nest site and getting it prepared for another mating season. One of the two eaglets from last year has left the area but the other is still hanging around…probably the departed one is male and the hanger on female based on typical eagle behavior.

This is funny as an example of political spin…and it’s funny no matter which side of the aisle your political persuasions lie. It’s also not a true story although I’ve used it here as it was sent to me. Snopes.com has evaluated this story as false…but it’s still quite funny.

Is this a goat or a bird? 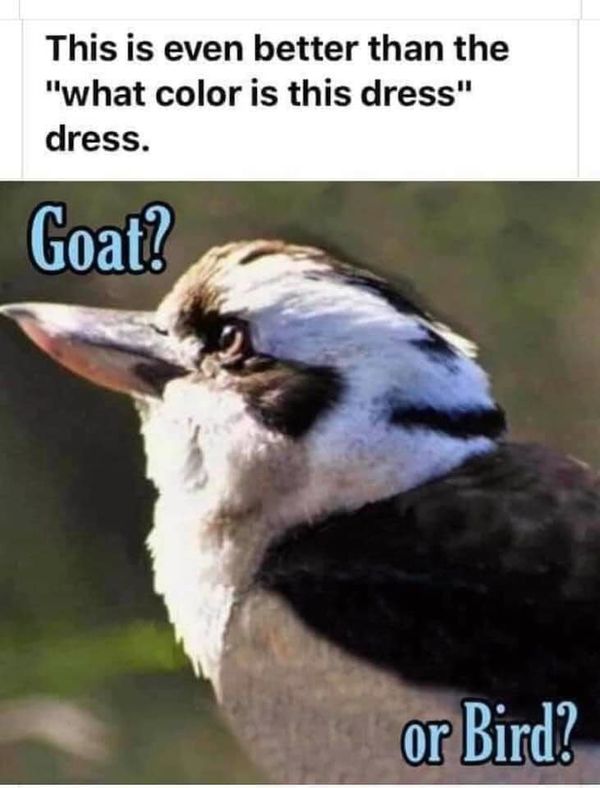 And finally…I really wonder about the inspiration for this political ad.

The full time RV travels and experiences of Gunther the Bear and Kara the Dog…along with their human staff neil and Connie.
View all posts by Gunther →
This entry was posted in Critters, Homebody, WIldlife, Ya Can't Fix Stupid. Bookmark the permalink.