Wow, it’s been 10 days since I was able to post. Part of that was just being too darned busy, part was having some slow internet issues at the last park we were camped at, and part was having to resolve some car difficulties.

After leaving Bull Run we journeyed up to Little Bennet Campground in Gaithersburg. The plan was to visit the Monocacy and Antietam Battlefields. The former is located near Frederick and was the scene of Robert E. Lee’s first invasion of the Union; he wanted to win a battle on Union soil to help generate public discontent with the war in the Union and affect the 1862 mid-term elections. He won the battle but did not try to really occupy any ground; after the battle he returned back across the Potomac to Virginia. The picture below is of the Worthington House which was the headquarters of the Confederate army during the battle. 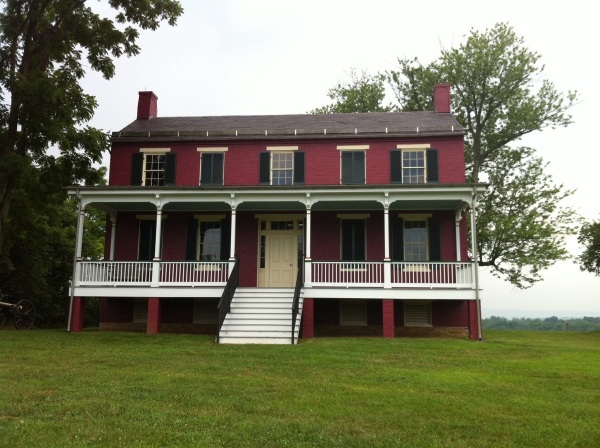 Upon returning from the battlefield the adults started eating dinner and a tremendous rainstorm came up. During the storm the turn signals on their Mazda came on solid and after the rain the key fobs would no longer open the door. Troubleshooting, discussions with the Mazda dealer in Gaithersburg, MD, and discussions with USAA Insurance revealed that the Body Control Module was bad and it had been shorted out by a leak that led back to the deer collision last September. The original body shop that repaired the car forgot a grommet which allowed water to run into the interior. Add to that our scheduled transit from Gaithersburg up to Elverson, PA near Valley Forge and the ended up with another USAA insurance adjuster and another Mazda dealer being involved  to finish the repairs. USAA came through though…and the original body shop in Johnstown, PA is paying for the repairs; hopefully they will get the car back tomorrow.

While the repair evaluation was going on they adults went ahead and journeyed over to the battlefield at Antietam. This was the bloodiest single day in the Civil War with over 23,000 casualties. Over 8000 of these were inflicted in just 90 minutes at an area called The Cornfield which is about a mile east of Antietam Creek. The Cornfield changed hands 3 times during that 90 minutes and was continually being raked by both Union and Confederate fire from essentially all four sides. Later in the day the climax of the battle was at what is now known as the Burnside Bridge over Antietam creek. There were 600 Confederate soldiers on the bluffs overlooking the bridge and they held off 8,000 Union soldiers for 4 hours until they were low on ammo at which point they withdrew to the top of the ridge rejoining the remainder of the Confederate lines and allowing Burnside the occupy the bridge. Antietam occurred during General Lee’s third invasion of the Union and was an attempt to influence the 1864 Presidential election by threatening Washington DC. Again; the Confederate side won the battle but was unable to influence the election so ended up returning to Virginia. You can see from the two pictures below showing the Burnside Bridge from both sides how 600 were able to hold off 8,000…the bluffs are 200 or so feet tall and go straight up from the creek.

Burnside Bridge from bluffs on Confederate side 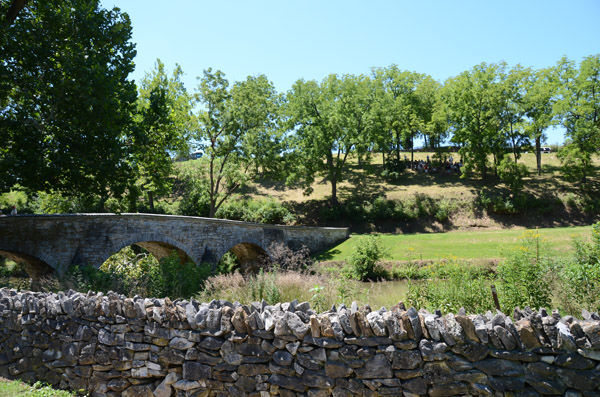 Burnside Bridge from Union side. Confederate Troops were on the bluffs above

After the visit to Antietam we moved up into PA and are now camped at French Creek State Park in Elverson, PA. The park is actually pretty decent overall…well located for our playing tourist but it does have a few drawbacks. There is no sewer hookup at the campsites so that means showers at the bath house…and the bath house is pretty bleak to put it mildly. Connie hates it…Neil is a little more tolerant. They also had a heck of a time backing into their site as the roads are narrow, the sites are treelined, it was raining while they were backing in, and there were numerous not so nice people who were unhappy that they were blocking the road. They also had an issue with the circuit breaker for their 50 amp power pole; but the maintenance guys fixed that today so we’ll have air conditioning on Friday when it gets hot.

Yesterday they went over to Valley Forge and toured around. It was pretty cool. There were about 12,000 soldiers wintering over during the Revolutionary War at Valley Forge and while most people think that all they were doing was trying to not freeze to death the encampment also gave General Von Steuben a chance to train the army and turn them from a pretty rag tag group into a well trained and professionally acting unit. Emerging in the spring the Continental Army was able to take the battle to the British resulting in the eventual surrender of Cornwalis at Yorktown and the end of the Revolutionary War.  Pictured below are Washington’s Headquarters and the outer lines of defense of the encampment.

Tomorrow they’re going out about 40 miles northwest to the County Fair…time for Corndogs, Deep Fried Twinkies, Pretzels, and Ice Cream. Friday they have a hike scheduled and Saturday we’re moving over to Flanders, NJ as we continue our journeys north towards upstate New York for the Bard Music Festival.

The adults were remarking yesterday that they don’t know how they got everything done while they were employed…this retirement stuff is turning out to be pretty busy for them.

That’s about it; hopefully we’ll continue to have better internet so I can post more often.