Not much going on this week…Connie did some work…Neil did laundry…they went to Mass on Sunday; pretty much a do nothing week here at Seminole Campground.

We did go on a hike yesterday to the Caloosahatchee Creeks State Preserve…not much wildlife but at least it was a nice hike through the woods and on the boardwalk. We heard a Red Shouldered Hawk but couldn’t find it in the trees to take a picture.

Neil did get a shot of Connie on the hike.

And he took a couple of pictures at the “Swamp Overlook” but the only thing it really overlooked was the factory in the far distance. 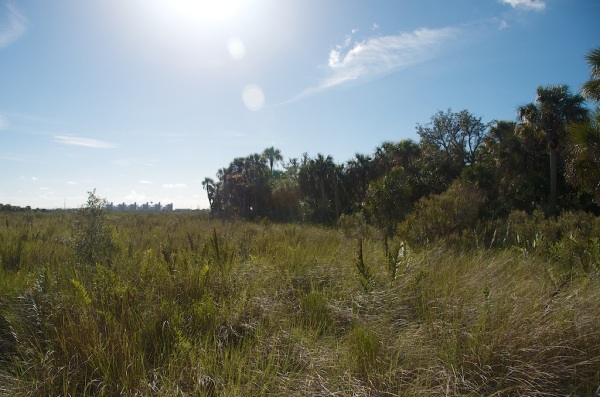 After that we finished the hike and headed home for a shower. Dinner was a simple one of pork and noodles. Saturday we again lazed the day away and had a nice dinner of Cheese Ravioli with Bacon and Garlic. Sunday we (you guessed it) pretty much did nothing again. After Mass Neil went on a bike ride while Connie went to the pool…he joined her after his ride and they snoozed in the shade, worked on her sewing, and read books on the iPad until it was time to come home for dinner which was Mexican Glazed Chicken with Rice and Black Beans. Yum again. In fact; we had pretty good meals ll this week. Tomorrow it’s another work day for Connie and Neil is headed of to Costco to buy some meat and staples they’re out of. He’s also got to get hot on ordering Xmas presents for her.