That has quite a nice ring to it…doesn’t it? What a great game the Tide played on Monday night; whipping butt on Notre Dame 42-14 in a game that was pretty much over by the first play of the second quarter when they scored to go up 21 zip. Notre Dame’s defense was helpless against the strong ‘Bama running game (heck, their line could probably start for a lot of NFL teams) and the secondary never could catch up to  our wide receivers. On the offensive side of the ball; Notre Dame couldn’t run and their QB spent most of his time running for his life.

Bama had a 28 nothing lead at the half and Notre Dame did come out strong on their opening second half possession…at least until they were intercepted at the 3 and a 97 yard touchdown drive later the rout was on. ND did manage to score a couple of touchdowns during garbage time but both were long after the game was effectively over. Here’s a shot of the winning QB heading to see his family after the game. 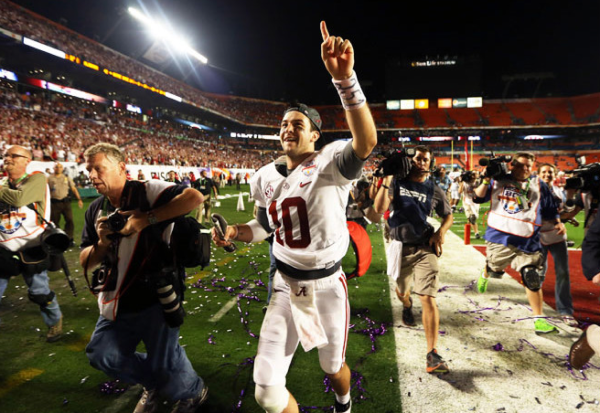 Brent Musbruger’s ND bias was clearly evident…it’s been along time since I’ve seen an announcer so blatantly biased (except on a school’s own network where the announcer is expected to be biased.

Yesterday was another not do much day…Neil did some more research on getting our mattress replaced and on looking for somebody to install air springs on BAT. Connie did some work. Neil went on a ride trying a different route and snoozed at the pool while Connie was getting her nails done; coming home in time for MacBreak Weekly on the TWiT podcast network. Dinner was some sautéed chicken using the Bavarian spice mixture Bryan gave us for Christmas, rice, and yellow squash for Connie, followed by Beer and Bingo at the Elks.

Today Connie has a doctors appointment and Neil is going to get a haircut after dropping her off…rumor has it that there might be kayaking later in the week although nothing firm has been decided. Neil’s thinking that dinner tonight will be pasta with chicken and sautéed garlic but might change his mind by the time dinner rolls around.

It’s supposed to be a hot day today; well into the 80’s (I know, somebody’s got to do it). Maybe we’ll do some more travel planning, maybe we’ll have a siesta by the pool…you just never know until it’s time to make a decision what you might do.

Neil is starting to get a little bored with not enough fun stuff…but since one of the major attractions of a 3 1/2 month stay here in Fort Myers was to recharge our batteries after 6 months of travel that’s to be expected. We did get some reservations for a couple of days down in the Conch Republic (Key West) early next month. We’ve never actually been there except for once passing through as we boarded a boat for a trip out to the Dry Tortugas Islands while we were here in college. These islands contain Fort Jefferson which is famous as being the place where Dr. Samuel Mudd was imprisoned for his role in setting John Wilkes Booth’s broken leg after he shot Abraham Lincoln. Mudd might (or might not, the evidence is somewhat unclear) have been railroaded by the court system at the time and was imprisoned there until being pardoned in 1869, largely as a result of him serving as the fort and prison doctor during a Yellow Fever outbreak in 1867.