And Even More Birds Today at Corkscrew Swamp Sanctuary

Man; this getting up early is for the birds…literally. We got up this morning at 0430 so that we could be to Corkscrew Swamp Sanctuary by a little after 0700; it’s an hour drive and we needed to have coffee and get some Golden Arches for breakfast.

We got down there about 0715 and started down the boardwalk. Almost immediately we noticed that the water level in the swamp was down between 2 and 3 feet from our last visit in November. This means good things for birds and wildlife.

Going really early has two distinct advantages. First; the crowds are pretty slim and everybody that does get up that early is a serious bird watcher…so there isn’t a lot of talking and unnecessary noise that scares the wildlife off. Second; dawn is when the birds are at their most active…typically by about 0930 or so they’ve finished eating for the morning and are hiding until dusk except for the ones you see around ponds and lakes.

First up; right out of the gate from the visitor center was a Red Shouldered Hawk who hung around a couple minutes then went off in search of breakfast.

A couple of trees down we spotted a Cardinal and then a Pileated Woodpecker. 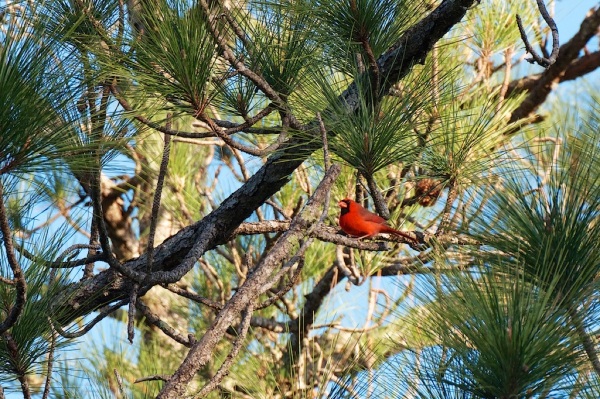 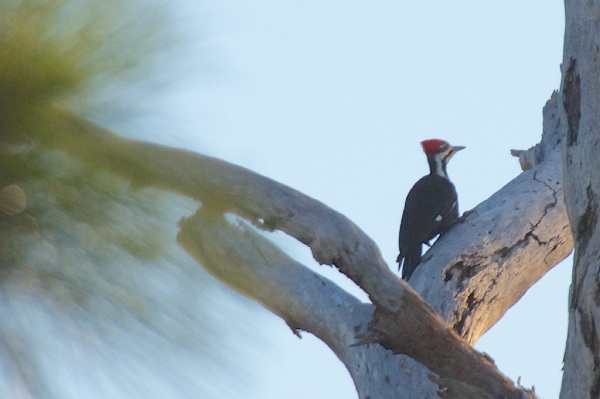 We continued on around the boardwalk and didn’t see much for the next mile or so except for some nice purple Iris flowers…Connie had Neil take a closeup…and another Cardinal. 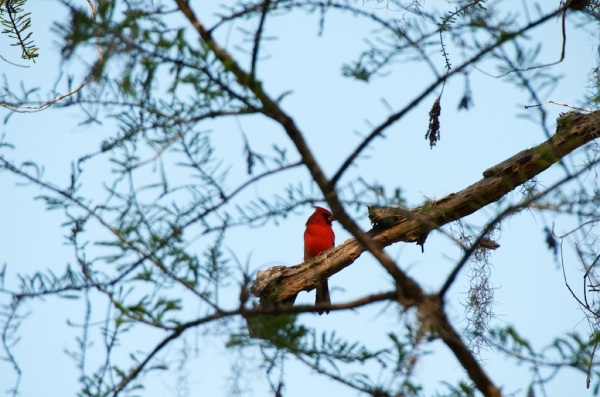 Getting out toward the marsh overlook we spotted a Brown Ibis and White Ibis on the same branch and then another Red Shouldered Hawk; although this one was pretty far away…luckily our new ultra zoom lens was able to pull it in decently. 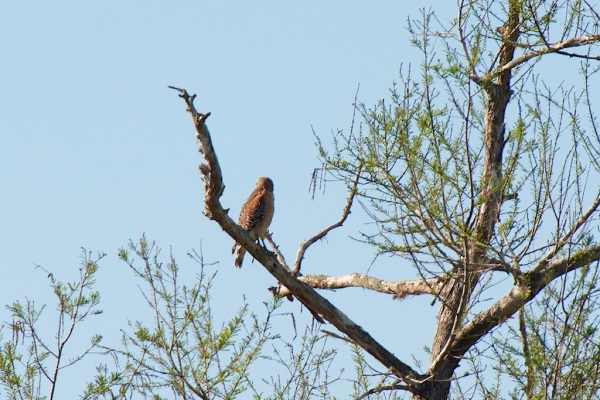 Continuing on around to the Lettuce Lake area; a pond near the boardwalk we really hit a wide variety; a Great Egret with breeding plumage.

And not 1 but 2 Yellow Crowned Night Herons.

Followed by a couple of baby gators, a male and then female Anhinga, and another Great Egret. 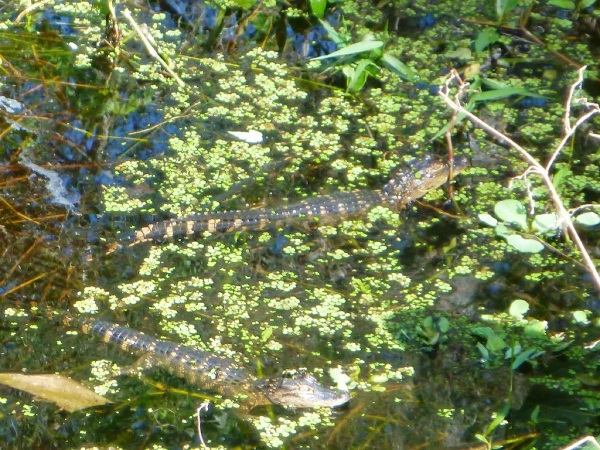 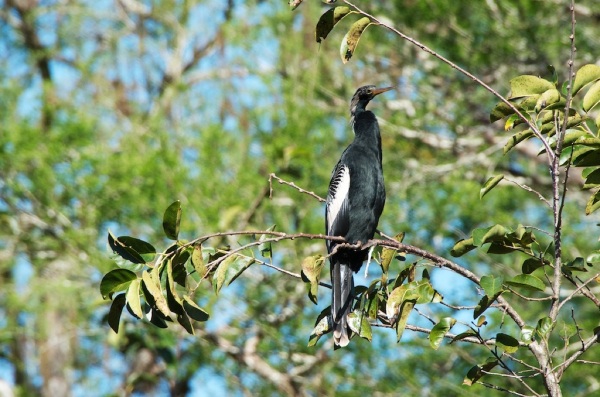 Another Red Shouldered Hawk; this one was about 10 feet from the boardwalk and maybe 6 feet higher; what a nice shot.

A family of raccoons. 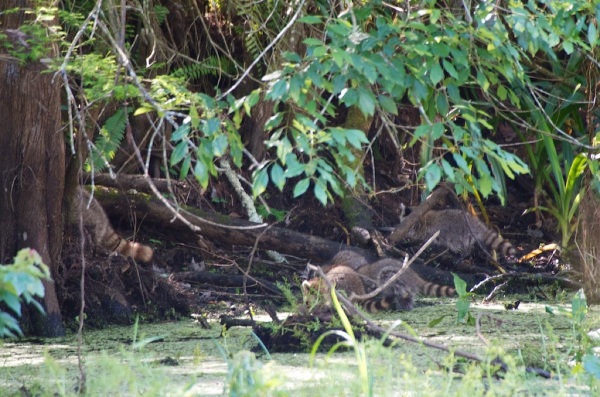 A Black Crowned Night Heron. Bonus points for both Night Heron species in a single day. 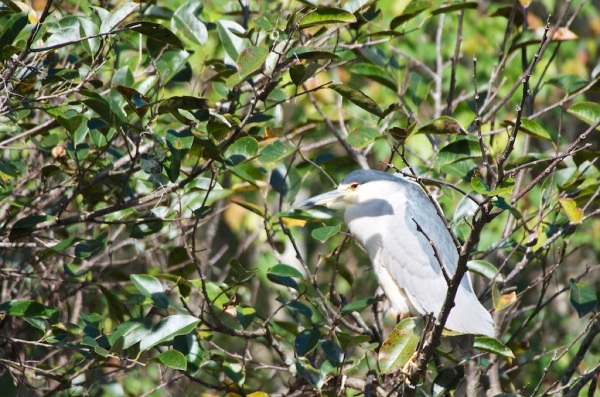 Our final find near Lettuce Lake was this water moccasin. It’s still alive so it’s not Neil’s favorite kind of snake. 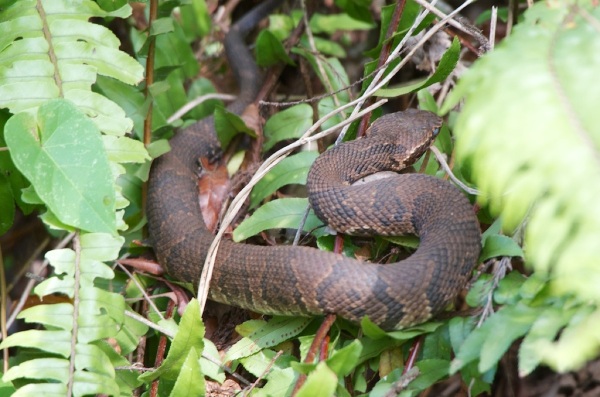 Leaving the wet area we transited the last wooded section and spotted this Barred Owl about 30 feet from the boardwalk. 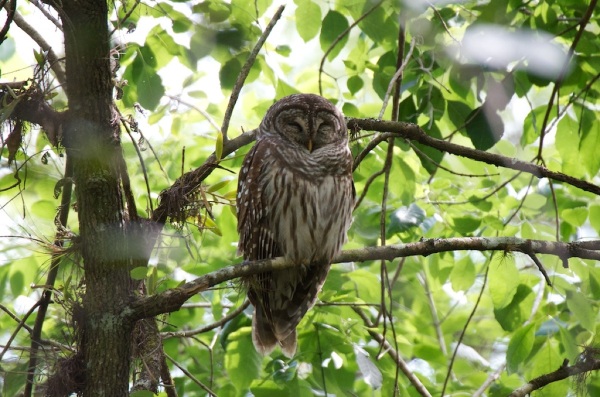 That was about it; We headed through the border region of the sanctuary hoping to see some more hawks in the tree line but no luck. We were tired by that time so we came home, had lunch and a nap.

Dinner was leftover pulled pork from the other day that Neil made into a Mac and Cheese casserole. Anything with pasta, pulled pork, and cheese can’t be all bad. Then it was off to Bingo and Beer at the Elks Lodge.

Connie did get a call today that the mammogram place got her films in from the Navy and so she doesn’t have to go and have more studies done tomorrow. They saw some issues with her exam a month ago and wanted to do more studies; but after studying her films from last year and the year before decided that nothing has changed since last year so all is well.

We have a list of things we still need to get done to get ready to travel again…only another week and a half left here at Seminole Campground in Fort Myers and we need to get some preventive maintenance items and checks completed before we leave.