Yesterday (Neil was wiped yesterday evening and didn’t process the photos for me until today) it again remained windy all day. The temp got up into the upper 60’s by late afternoon and as long as you were in the sun and out of the wind (we sat in the Adirondack chairs at the Tiki bar instead of inside last evening) it was pleasantly warm. Out in the breeze though was ‘nuther thing entirely…one didn’t want to remain out there too long.

We lazed around in the morning and Neil finished up the 30,000 foot level plan for our trip around the Northwest and then the transit back to Fort Myers…we made a return reservation here at Low Key for the last week in October to sort of ease into the Florida attitude on the way to Seminole Campground in Fort Myers.

After a quick lunch of leftover white pizza with 3 cheeses, fresh basil, and lots of garlic we headed out for our last major activity here in Cedar Key. Connie found a 9 mile long Nature Drive through the Lower Suwannee River State Park so we headed up there. We had found a couple of hikes that would have been nice if the water was a little higher but after our…lack of water at the pond the other day let’s call it…decided that dry ponds would be pretty boring so we skipped them until our return in the fall (the water may be too high then for lots of wading birds but that’s the way it goes; a few is better than none).

Much like our hike the other day; it was a nice drive but the wildlife was pretty scarce. Pretty much the only thing we saw moving about (other than butter flies) were Turkey Vultures…it pains me to post a picture of one of those ugly creatures but ya gotta do what ya gotta do and sometimes the birds just don’t cooperate.

Other than that we saw a large number of butterflies and got some nice pictures of them as well as a picture Connie got of some sort of tulip/lilly and one Neil got of her behind as she got the flower shot. 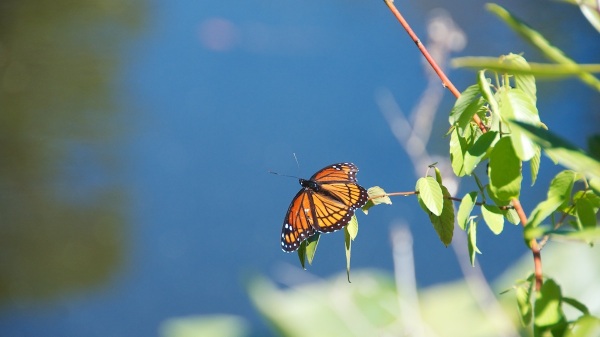 and then another one of Pond 8 with reflections on the surface. 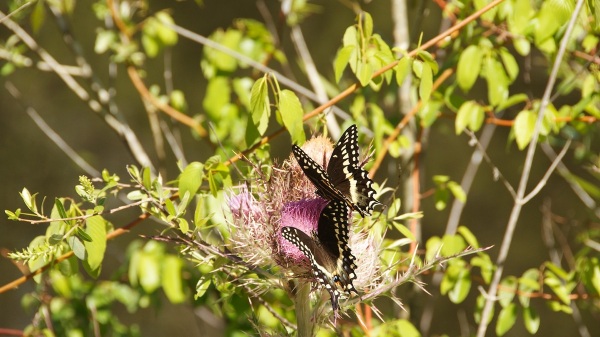 and then it was time to head home. We stopped by a local fishmonger and got a couple of grouper filets for dinner then headed over to the Tiki bar for a beer in the Adirondack chairs (I’ll grab a picture of those today for you as well as a couple more shots of the Hideaway itself). Coming back in; Neil baked the grouper with shallots, lemon zest, panko bread crumbs, some Emeril’s Essence (sort of an Old Bay seasoning equivalent) and olive oil. Connie whipped up a salad to go with them and dinner was pretty good. Afterwards Neil ran out and got some bracketed exposures of the sunset to make HDR photos out of…once he processes them I’ll have him talk about how/why/what in a primer on what HDR is for you. I did grab this one frame from him to post ahead of time though.

Today we are going to walk across the highway and see what sort of birds populate the marsh over there; we keep seeing cars stop so there must be something to see. Afterwards we gotta hitch up BAT to the house and break down all the outside stuff…normally we leave that until the morning of travel but with almost 400 miles to go tomorrow we gotta get an early start…so we’re going to dump tanks and do everything but water/power connections this afternoon. Then it will be dinner downtown somewhere and watch sunset on the bay one last time before we head out for Gulf Shores tomorrow.