Well, we been doing a whole lot of nuthin the past coupla days. We’ve been less than impressed by the weather here in Texas so far…after a week here we’ve had maybe 6 hours of sunshine and almost no time with less than 20 knots of wind. Today Neil was out running and it was 43 degrees and 25-30 knots of wind; he had on shorts and a long sleeve t-shirt and really wished he had his gloves on the way back. Connie’s been working the past couple of days…she’s got a few more issues with this class that she’s working through.

Dinner last night was a couple of Angus Burgers (pre-made) from WalMart; our friends Howard and Linda Payne recommended these and they were pretty good. Not quite as good as made from scratch but with the addition of some sautéed onions and mashed taters they were pretty good and we had some leftover taters to have with a fried egg over them for breakfast.

Neil got a haircut and Connie is off getting a dye job and nails done this afternoon…it’s cold and windy today (the high was 70 or so at midnight and it’s down to 49 now (actually I guess that’s up from the 43 it was earlier but the sun did come out a little to warm things up)…so I think he’s going to make some Italian Sausage and Corn Chowdah for dinner; toss some cheese on top and a little sour cream and I’m thinking it will be a great dinner for a cool day.

We ended up ordering a SnapOn torque wrench from Amazon yesterday afternoon; Sears didn’t have any Craftsman brand that had the 250 ft lb capacity we need and we aren’t interested in any more cheap ones after the previous failure. He hated to spend $175 on it; but it’s something you just gotta have to properly torque the rig wheels.

We got our new wide angle zoom lens for our Nikon D7000…it has a much wider field of view than our other lenses and will really be useful for landscape photos as we get into the western part of the country. Here are a couple of comparison shots between the new 10-20 mm lens and our standard 18-200 zoom that we use for 90% of our pictures. Maximum field of view on the 18-200 is 76 degrees and max on the 10-20 is 101 degrees so it gets 1/3 more of the view in a single frame. Being a wide angle; it’s also a lot easier to take a series of overlapping shots and then stitch them together with Photoshop into a single wider frame; with a little work Neil can get a 180 degree photo this way.

The 18-200 will still remain our primary lens; it’s just about perfect for everything in the middle 3/4 of our picture taking range…wide enough for decent but not perfect landscape shots of canyons or mountains and long enough to get decent shots of birds. The 10-20 will shine in landscapes and the much larger and heavier 50-500 is for longer range shots of birds and the mountain goats and bears he’s looking forward to seeing as we get further into the west.

The first pair of shots was taken of the front of the rig about 30 feet across the road. First is the 18-200 and then the 10-20. The second pair is of a house across the field a couple hundred yards away. In both pairs you can easily see the much wider field of view the 10-20 provides. 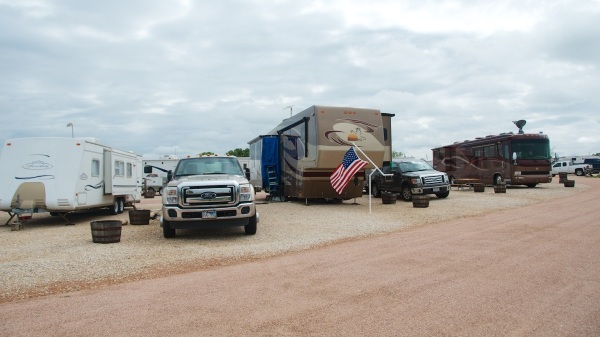 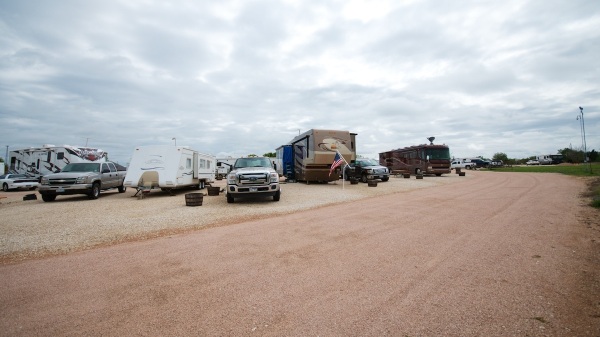 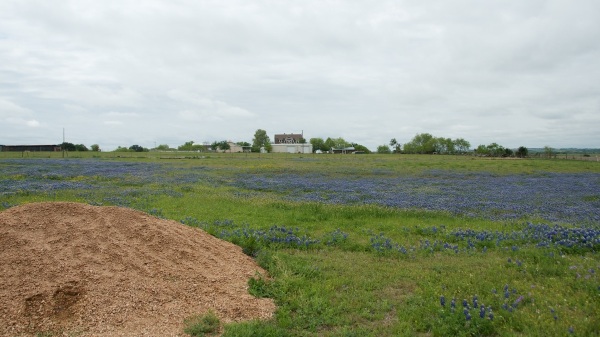 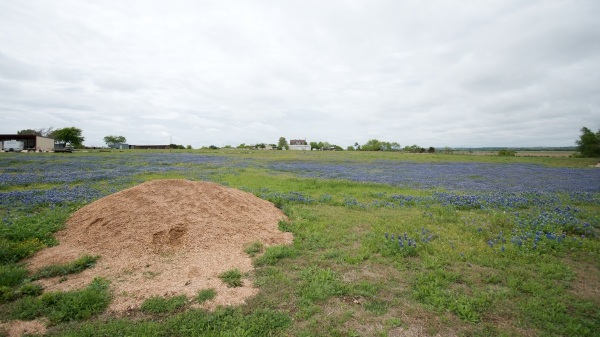 The overcast skies you see in the shots above is close to the best weather we’ve had as I talked about above. It’s supposed to be nice on Friday and we’re planning another series of hikes out at Balcones NWR. He’ll probably take all three lenses on the hike to get a little practice with the new one.

I had to edit this and tell you about the most excellent dinner Neil made. Italian Sausage Soup…take a couple of Italian Sausages and thaw about halfway then slice into 1/4 inch or so slices. Brown in a large saucepan until done and set aside, reserving fat. Add a chopped onion and chopped potato to the pot and sauté until the onions are translucent. Add a tablespoon or so of Italian Seasoning and just enough chicken stock to cover the potatoes and cover, Simmer until potatoes are almost done then add a handful or two of cheese stuffed pasta (I used frozen 4 cheese tortellini) and a little more chicken stock if needed to cover the pasta. Simmer covered until done. Add a cup or so of half and half, season with salt and pepper to taste and add a couple dashes of hot sauce (we use Frank’s, it’s way better than Tobasco). Serve in bowls with some shredded cheddar cheese and a tablespoon or so of sour cream (or even better; French Onion Dip which was what we had in the fridge). Best soup we’ve had in many months…and it all disappeared.

Since I don’t have any good photos from the past couple of days to post; here’s a Red Shouldered Hawk close up from when we were in Sarasota last month. Neil really likes the action shot with her screaming and taking off from her perch…she was only about 30 feet or so awry from us when he took this. Hopefully we’ll spot some Harris Hawks or Northern Harriers which are common around these parts on our hike on Friday. 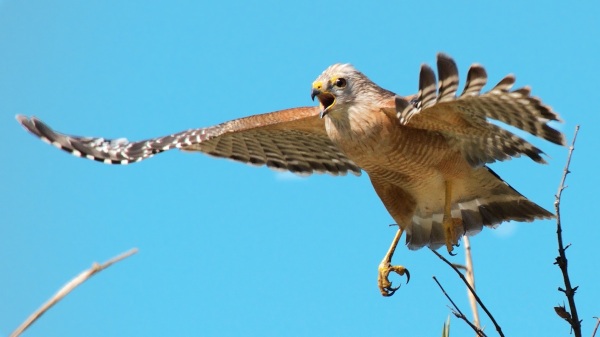