Today we headed off to 0830 Mass then stopped by Denny’s on the way home for brunch. After that we waited a bit until Connie’s tummy issues had settled down a bit then headed off about 10 miles south to our destination for the day…hikes at Cheyenne Mountain State Park.

This state park is located on the flanks of Cheyenne Mountain which is probably more famous as the home of NORAD, the North American Air Defense Command. Every body has probably seen the pictures of the tunnel into the mountain with the nuclear blast proof doors where incoming attacks are monitored and if necessary responded to. We couldn’t see the opening to the tunnels from where we were even though we were on the south side which is where the opening would be located (makes targeting by ICBMs harder). Here’s a picture of Cheyenne Mountain (at least the top of it)…you can barely make out the antenna farm located a bit to the right of the highest point of the peak. A large portion of the mountain has been hollowed out and the United States command center built into the hollow section. It’s got huge nuclear blast proof doors and enough power, air, and water to last for several months on it’s own and sufficient communications links to manage all of the US military forces in the event of a crisis. 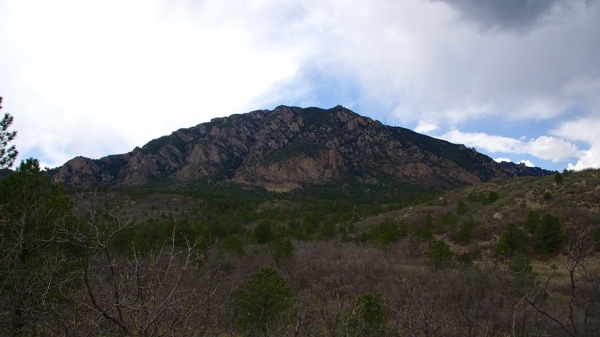 Anyway; we paid our entrance fee and parked at the picnic area then heeded off on a hike that combined the Coyote Run and Zook Loop trails for a total of about 2.5 miles of hiking. There was a couple of hundred feet elevation change through the hike which in our non acclimated state was enough. Unfortunately the wildlife really didn’t cooperate much. We spotted a couple of deer hoof prints but they weren’t distinct enough to bother taking a picture of. Neil did grab a picture of Connie on the trail

and we saw this cool grasshopper alongside the trail at one point.

You can see the rain coming down in a couple of places; it actually looked a lot better in person but I  guess this photo is the best I can do.

We passed a couple of other hikers but it was pretty quiet on the trail. After that we headed home and rested a bit…by dinner time Connie’s tummy issues had subsided a bit so Neil made some spaghetti with onions, cheese, olive oil, and some leftover bison short ribs from our dinner at Ted’s the other night. Add a couple glasses of wine and it was (again) quite tasty.

Tomorrow we’re going to visit the gold mine; it entails traveling about 1500 feet or so underground to see the actual gold mining operations; we’re looking forward to it. We might go to Red Rock Canyon as well but it’s supposed to rain so that might get canceled if it does.