I’ve come to the conclusion that in the Rockies Elk are essentially the equivalent of squirrels…the suckers are just about everywhere. Today we slept in until 0830 and then grabbed a quick cup of leftover coffee from yesterday and some scrambled eggs for breakfast. This was because Connie wanted to work awhile today so we hit up the Snowcone Cafe for a cup of coffee and some internet access.

First though; the elk glut. On the way out of our campground this morning we saw this one alongside the campground road

then about 50 yards down the road we spotted a pair of calves nestled down in the grass…with two moms hovering pretty close nearby watching over the babies.

On the way back from our hike we had to stop while 7 or 8 of them walked across the road in front of us and then once we got back to the house we spotted this one right across the road from our campsite. Neil snapped this one from inside the coach just to illustrate how close it was…notice the radio collar on this one so the park rangers can track her movements.

Anyway; we got to the cafe, grabbed a couple of cups of coffee and some internet access and Connie worked for 2 hours while Neil did email, posted yesterday’s blog post, argued with the New Horizons people over our slide repair, and surfed the web. Once that was done we came home and had some leftover spaghetti from last night along with a quesadilla for lunch; then it was off for more Fun Stuff.

Our destination today was the Patricia Lake Loop hike; this goes out alongside the lake and then comes back alongside a slough (what we would call a marsh back home) and was a total of about 3.5 miles with 80 meters of elevation gain. We started off climbing steeply uphill through the woods on a multi use trail that had been used by many, many, many horses and hence the trail was pretty torn up in addition to having piles of horse poop all over. Neil was hoping for the first 3/4 of a mile or so that we would eventually see something worth seeing rather than just a muddy trail and trees. Sure enough; we got up to the level where the lake is and hiked alongside it for awhile. Here is a series of 3 shots of the entire lake; these were taken from about the middle of the long side of the lake looking northwest, north, and then northeast.

The lake is maybe a mile or so long and a half mile wide with (as per usual up here) really clear water since it’s a snow melt fed alpine lake. Connie also spotted some nice purple wildflowers and then we came out on a little beach where we had a nice conversation with a couple of Canadian men from the Quebec area who were out here on a 3 week driving/hiking tour of Alberta, British Columbia, and the Yukon Territories.

Neil also grabbed a nice pano series from the beach which was located at the narrow end of the lake looking from northwest on the left back through east at the right side. Another beautiful alpine lake and the conversation with the two Canadian gents was great as well…I’ve included a shot of them as well…and a shot that Connie took of the lake with some tree branches in the foreground to frame it. 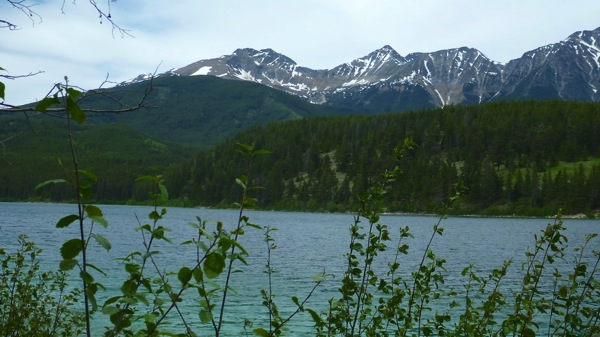 We headed away from the lake and turned back on the return trip back to the parking area and spotted this pretty butterfly along the way.

Then Neil spotted a Canada Goose that on further investigation turned out to be a pair of geese that on further investigation turned out to have 6 goslings along with them. Mom and dad were on overwatch for predators while the kids hunted something to eat in the shallows. We’ve seen lots of geese in our travels but I think these are the first gosling babies we’ve ever seen in the wild.

Shortly after the gosling sighting we happened across a Tricolor Blackbird; this is a very close but western cousin to the common Redwing Blackbird we’ve posted shots of before. The Tricolor has red and yellow epaulets where the Redwing has red with just a narrow yellow stripe at the bottom of the epaulet. Just a few feet away from the Tricolor were a pair of Mallard Ducks foraging for dinner…Neil got them both up and face down in the mud. 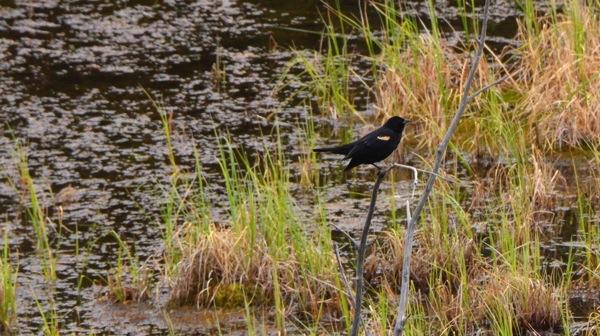 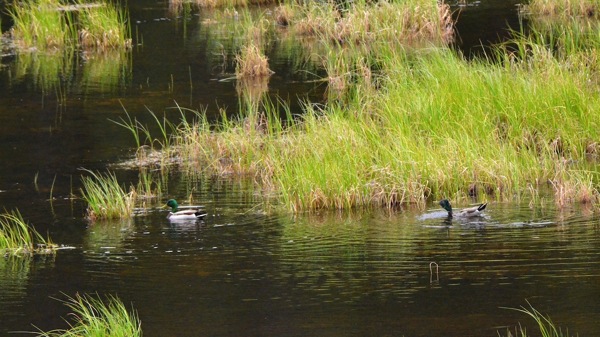 Here’s an overview picture of part of the slough itself and a close up of the beaver lodge in the center of one of the ponds (no beavers though, they musta been inside asleep)…as well as one that proves conclusively that bears do you know what in the woods (I swear, it wasn’t me, must have been one of my uncivilized non domesticated cousins). 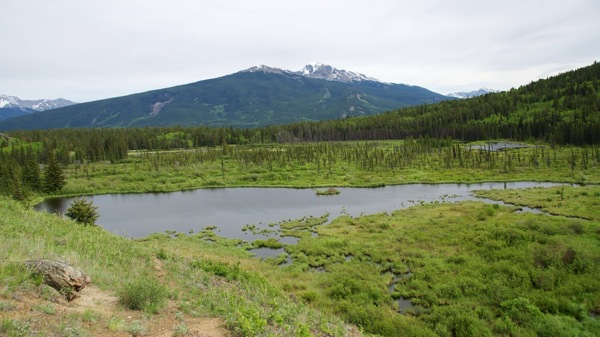 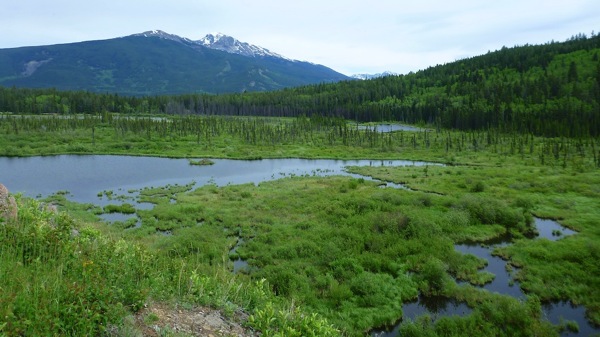 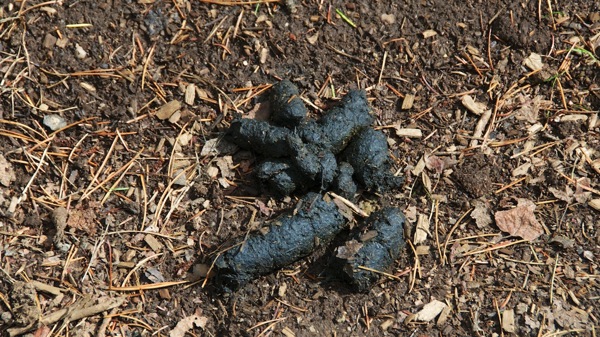 After those last couple we hiked the remaining half mile back to the car, got out of our muddy hiking boots and headed into town. We stopped by the Jasper Brewing Company again and had a couple of pints of Honeybear Ale (man that stuff is good) and lo and behold our two Canadian hiker friends stopped in since they decided it was beer o’clock as well.

We headed home, got the shot of the elk out the back window from the beginning of the post and cooked a couple of pot pies for dinner. We were going to have a steak and make a hot steak and onion salad out of it…but it hadn’t thawed completely so we’ll just move that recipe until tomorrow.

Speaking of tomorrow; it’s supposed to rain so we’ll likely just go in so Connie can do some more work and then depending on the weather we’ll do something although I don’t know what it will be yet.