Well, we might be trapped here in Banff; but before I get into that here’s another edit of the shot we took at Moraine Lake over near Lake Louise the other day. Neil is playing around with the HDR stuff trying to find the most realistic combination of presets in the HDR application; he thinks he likes this version better than the one I posted the other day. 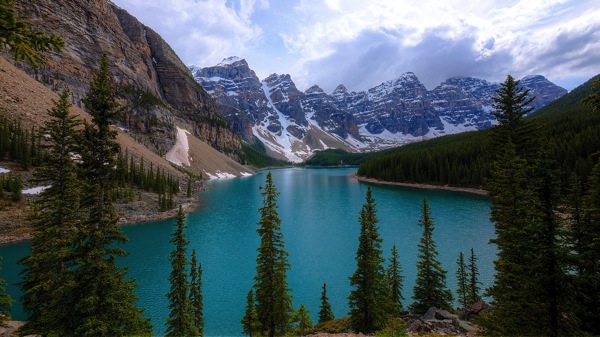 Anyhoo; let’s talk about being trapped (maybe) here in Banff. It’s Friday afternoon and we’re supposed to be leaving here tomorrow heading west to Salmon Arm. It’s been raining since late evening on Tuesday and we spent Wednesday and Thursday inside (well, we did go out and do laundry yesterday and went to the library for internet both days, but no fun stuff) and as it was continuing to rain today Neil headed out to fuel up BAT for tomorrow’s trip. There were 30 cars in the gas station and after fueling he asked the guy at the counter why the station was full…and got this incredulous look. The reply was the Banff was isolated from the east as there were mudslides on the road to Calgary along with flooding to the east and it would be closed for a week going that way. No need for us to panic; we’re pretty high but they are evacuating some low lying areas of Banff right next to the Bow River and sandbagging the hospital which is by the river…we’re about 500 feet up from there so aren’t in any danger of washing away. After filling BAT, he ran down and filled up the car as 2 of 3 gas stations in town are already out of gas. Good thing he got that done today; there won’t be any gas tomorrow. After filling up he went in and explained our situation to the people in the visitor center; currently Highway 1 is open to the west all the way past Salmon Arm (our next destination about 250 miles west) and is not expected to have any issues although we’ll verify before we head out in the morning.

Apparently all of the rain and flooding we’ve been having is mostly on the east side of the Rockies and the water and flooding is all going east. We’re pretty much at the high point; once we get about 15 miles west of here we cross the Continental Divide and at least as of now all looks OK going that direction. We’ll check tomorrow morning before heading out and hopefully will be able to transit to Salmon Arm as scheduled. We’re supposed to stay there two nights and then head south stopping just over the border in Oroville, WA for one night then continuing on to Leavenworth, WA for 3 nights before heading to Fort Lewis. Looking at the map we are well west of the mountains once we get back into WA and there should be no flooding to bother us; hopefully we’ll have smooth sailing west tomorrow and the weather in Salmon Arm (at least according to yesterday’s forecast) is supposed to be good. At worst we’ll just stay here a few more days and cancel out on Salmon Arm except for maybe an overnight along the way…we’ll modify our plans as we need to based on the weather and what’s open although we’re keeping our fingers crossed that once we get west of the divide the flooding wont’ be an issue anymore. We’ll try to verify that with looking at some weather maps when we have internet…we’re heading down in a bit to post this, get email, and have a beer as we’re going stir crazy sitting around the house.

I’ll post again tomorrow with updated results and status. Connie says she is so done with Canada after all the rainy weather we’ve had. I gotta sort of agree with her; we figured that June would be a good time to avoid as many tourists as possible but it’s been cold, rainy and damp and we almost wish we had waited another month…that would put us into the height of summer and crowds but at least it would be warm and once it’s summer the springtime rains typically have ceased. We were driven by the concert date in Edmonton though so waiting wasn’t really an option anyway.