This is the second part of the Columbia River Gorge day trip. Last post I left off with the photos from Shepperd Dell Falls. We met this couple from Arizona while at the Dell Falls and kept running into them pretty much the next 2 hours until we turned off of Historic Route 30 and onto the Mount Hood Scenic Drive.

Our next stop was the 120 foot tall Bridal Veil Falls. While not the highest one we saw on our trip it was clearly the highlight as far as view and flow rate was concerned. The only drawback was that it was a 0.6 mile round trip hike to get down to the base of the fall with about 120 or so feet of elevation change since the top of the falls passes about 5 feet under Route 30 and the viewpoint is at the base. The top portion of the hike is paved but the second half of the outbound hike is unpaved and naturally all of the elevation is on the unpaved portion. Despite this; it was really only a bad climb down for Neil in his hiking boot for a hundred yards or so over a rocky part, after that the remainder of the downhill was relatively smooth albeit downhill. Several folks we passed on the path noted that Neil must have really wanted to see this fall to go down there. While it was a decent climb down and back up…it was well worth it as the view was pretty spectacular. 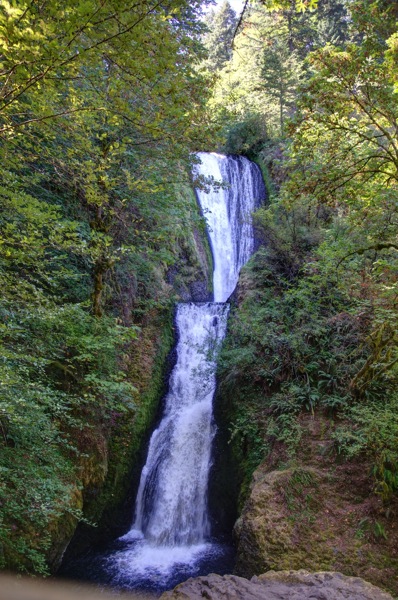 After those shots we took the long hike (well, it was only long due to Neil’s boot) back up to the parking lot and headed on down to the 242 foot Wahkeena Fall but unfortunately the view from the road was pretty lousy and the hike to a decent view was straight up a path that was too steep to easily navigate in the boot since it keeps your ankle from flexing. This was the best shot we could get…and it only shows the bottom half or so of the fall itself.

Our next stop is the most famous fall in the gorge; the 611 foot drop Multnomah Fall. This is divided into a 542 foot upper drop over an overhanging cliff edge so it’s a straight vertical drop and a 69 foot lower fall drop located directly under the bridge. It’s only about 200 yards from the parking lot to the fall itself so this was an easy drop. The traffic here was terrible since it was about 1300 when we arrived; Connie dropped Neil off and waited for a spot in the parking lot; by the time she found one he was done with the falls photos so we just watched it for a bit then ate a hot dog for lunch at the visitor center. We didn’t hike up to the bridge as Neil had done about all the hiking he was up to for the day. The first shot shows both upper and lower falls and the second one is a closeup of just the lower one. Good thing Neil took the really wide angle lens when he got out of the car as he really needed it for these shots. I think this is the highest waterfall we’ve ever personally seen although it really isn’t all that large of an overall flow rate. 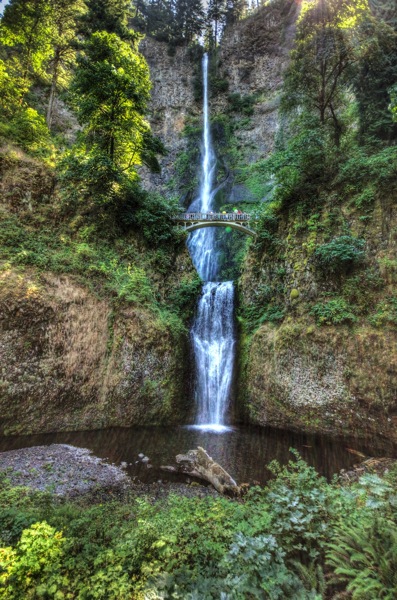 Our final waterfall for the day was the 176 foot Horsetail Falls about another 3 miles up the road from Multnomah Falls.

We had one final stop along the river before heading towards Mount Hood; we stopped by the Bonneville Dam so that we could investigate the fish ladders. Since the Columbia River drains a large portion of the Cascade Mountains it’s one of many spawning grounds for salmon in the Northwest. As such; the fish need a way to get around the dam on their way upstream from the ocean to their birth stream to spawn. The lake behind the dam is about 60 feet higher than the downstream level…so how do fish get up? Essentially there is a canal that leads in a U shape from upstream of the dam itself to a point well past the spillway and it’s more turbulent water flow. If the canal was dug with a constant slope then the water flow through it would be fast enough so that the fish cannot get upstream; so instead of a constant slope there are a series of box shaped sections of the channel  with each box being a foot or so higher than the lower box (think of stairs) Each individual box has a wall at upstream and downstream ends that is set so that the top of the wall at the lower end is about a foot underneath the water. The boxes are about 8 feet deep and there are holes in the walls so that the fish can swim from box to box.

The way the boxes are built…the technical term is that the walls form a series of weirs in the channel… most of the flow happens near the surface of the channel as the water flows past the weirs. Down in the middle and lower sections of each box the water flow (and hence the speed of the water flow) is greatly reduced. The fish make their way through the holes in the weirs from box to box and gradually climb up the channel from downstream to upstream and eventually into the lake behind the dam. They are then free to continue on upstream to the spawning grounds.

The first shot is of one of the turbine blades from the dam; there are about 20 of these each turning at 75 rpm and connected to a generator; the total electrical output of the dam is almost 1200 megawatts. The second shot is the dam itself with the spillways partially opened; they are used to maintain the depth of the lake behind the dam at about 60 feet. The third is the fish ladders; in this shot the dam is out of view to the right of the frame and the river is almost directly behind the portion of the fish ladder. The ladder continues past where the shot was taken from and then continues curving to the left and eventually back to the lake behind the dam. We also went inside the building and there are windows where you can look into the ladder…we watched various salmon species and lampreys (they’re sort of like eels) making their way upstream…but it was too dark and the windows were too blurry to get any decent photos of the fish themselves.

We said farewell to our friends from Arizona here and continued on east. Shortly after the dam Historic Route 30 ends so we hopped on I-84 another 20 lies or so until we arrived at Hood River then turned south around Mount Hood and then west around Mount Hood and back to Portland to rejoin I-5. Along the way we got some shots of Mount Hood…the first two are from the east side as we drove south past the mountain and the last one is from the south as we headed back toward Portland.

Our final stop was at the Timberline Lodge, the last photo above was taken on the way up to the lodge itself. While at the lodge Connie walked up and took a few photos of the views and lodge interiors. It was pretty much a tourist trap and Neil was too tired by this point to walk any more.

By this time we were getting tired and it was getting late so we headed home. The traffic was pretty light until we got back onto I-84 west and then I-5 north. We got stopped first by the afternoon rush hour in Portland and then by the remnants of a vehicle fire on the bridge over the Columbia River. One we eventually made it past the backups it was pretty smooth sailing all the way home…we stopped by an Italian restaurant in Yelm, WA about a half hour before we got home.

I think we’re going to head over to the beach one day next week…it won’t be warm enough to swim but we can at least sit on the beach and get a bit of sun as well as lunch somewhere with a view.