Another great view of Mount Ranier today…I guess that the Ranier View RV Park is aptly and appropriately named.

After our day trip to Nisqually earlier in the week on Wednesday we just spent Thursday and Friday around the house. Connie had some work to get done…it’s getting time for  the new class of techs to start school and she’s been hard at work organizing them, incorporating some new software that the college has in it’s arsenal into her workflow, and catching up on some professional reading. Meanwhile Neil has been doing…well, not much.

Late Wednesday afternoon/evening/overnight and Thursday morning it pretty much rained constantly; so doing nothing was pretty much the best thing he could have done. After Connie’s work was completed on Thursday by mid afternoon it appeared that the weather had cleared…so we decided to run out and handle a couple of errands before rush hour really got going. We headed north about 10 miles to a jewelry store in Puyallup to get her diamond tennis bracelet repaired…departed from home in beautiful weather but just as we parked about a half block around the corner from the jewelry store it started raining. We managed to get inside before it poured and got an estimate and filled out the paperwork for the repair. Just as we got back to the car it really opened up but it stopped after a few minutes. We had to stop by Safeway for a couple items and (naturally) it poured from just as she dropped Neil off at the door to go shop until just after he got back in after the completion of the errand…and then had stopped completely and was bright sunshine again by the time we got back home.

Friday was more of the same…rained all night and stopped about mid morning then it cleared up and remained clear the rest of the day and is supposed to be clear and warm through the holiday on Monday.

After a great dinner of home made crab cakes Neil walked down to the dumpster to drop off the garbage and noticed a really beautiful sunset on the mountain as he walked back to the house; so he grabbed the camera and took a few photos…here are a couple of slightly different final shots…the second one really invokes what it actually looked like more…the mountain sticking up out of the clouds and brilliantly lit on the glaciers by the setting sun. 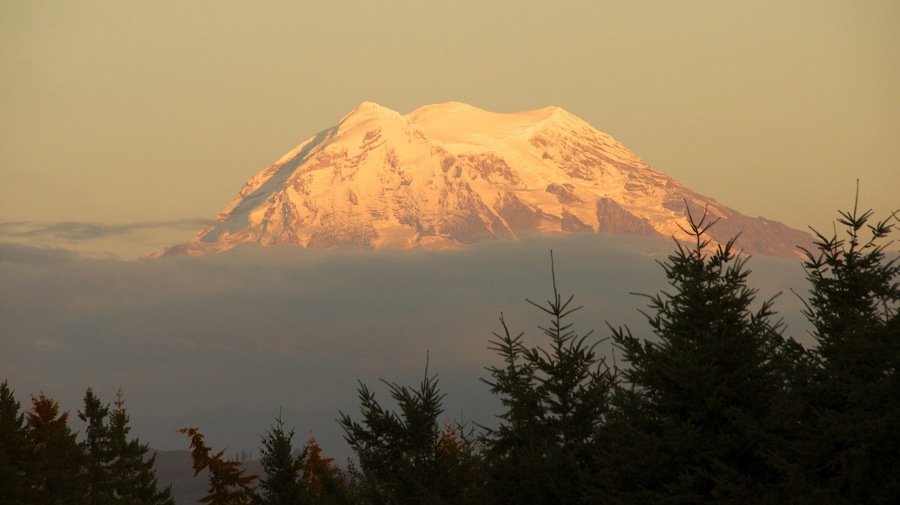 We could get used to views like that…but they would require us to remain near mountains…which means it would get cold with all the related snow and such…nah, I think we’ll head on down south  here in a few weeks.

Today we’re watching football and drinking beer in the afternoon and I think we’ll have an Italian sausage with some stuffed pasta from the freezer for dinner. We’ll grill either tomorrow or Monday depending on how the weather looks…burgers and fresh grilled corn we got from the farmer stand up the road.