Monday was a pretty good day. Neil did the laundry in the morning while Connie worked…she’s got her phlebotomy students going out this week and has to finish up all of their clinical packets, binder stuff, and make sure they’ve got all of their paperwork submitted properly. Once that was done and Neil was back from the laundry he made a couple of wraps for lunch and then we headed off for a short hike. Our destination was about 12 miles away…the Corps of Engineers has a dam there with a lake named Old Hickory Lake. We checked out the dam, watched a tug push a barge of coal into the lock heading upstream, and went on a mile and a third hike around the three loops of the Old Hickory Lake Nature Walk. Since it was the middle of the day and we were pretty close to civilization we didn’t see much in the way of wildlife but did have a nice walk in the woods and Neil got a couple of pictures of the pond at the far end of the loop. We got a glimpse of a fish of some sort (trout probably) eating an insect off of the surface but it was too quick for a picture. Since it was a nice non windy day…Neil took pictures of the reflections of the trees and sky in the pond since it otherwise didn’t make a very interesting photograph. 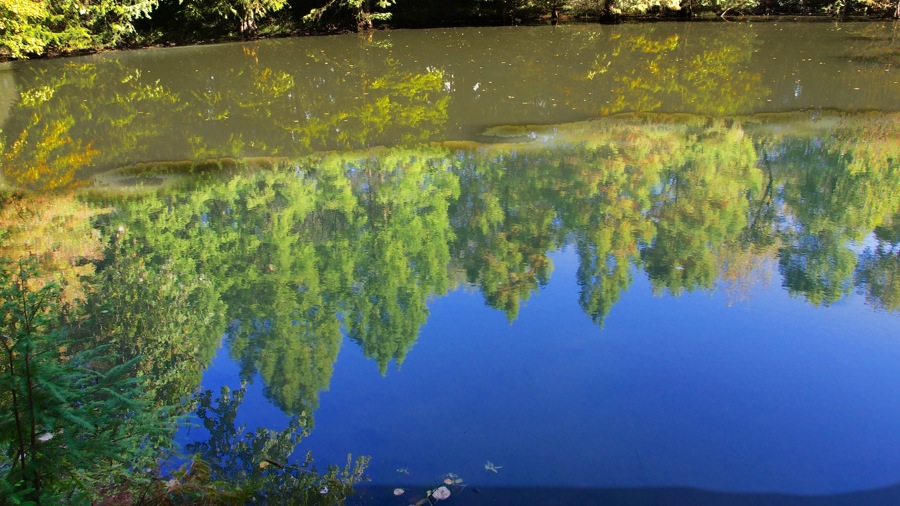 He’s also playing around with some new plug ins he got for his photo editing application Aperture…they allow you to change the look of photos, reduce noise, increase sharpness, and mess with the colors in the picture. He likes the reflections in the second one better but the top portion of the water just underneath the shore he likes better in the first shot…but the second one was framed without much of the trees in it so he wasn’t able to include them which would have balanced the reflections a bit.

After our hike we came home and rested then headed out for dinner…we figured that we ought to head into town at least one night and hit up the honky-tonks. Our first destination had live music and we found a spot at the other end of the bar where it wasn’t too loud…but all they had was beer in bottles so we left. Our second stop had no music but did have 70 beers on tap…and Saints be Praised Murphy’s Stout was one of them. Yum. We had a couple pints of that and also some really good wings that were roasted instead of deep fried…they were really meaty and had a smoky/hot/sweet Chipotle sauce on them. After that we wandered the strip for a bit…but didn’t find any place else worth stopping at…Connie was looking for some soup but never saw any of the sign boards that attracted her. We came home and had a little piece of salted caramel freezer pie…it was leftover from Sunday when MJ was here. We watched TV and then went to bed…listening to it rain pretty steadily all night.

Today is more work, another hike, and Neil is going to listen to Apple’s big announcement…they’re supposed to introduce new iPads and we need to replace our first generation ones with some that aren’t ready for the Smithsonian. Tonight we’re having some Panko Crusted Chicken with lemon/garlic sauce then we’ll pack up the outside stuff and hitch up…we are leaving early tomorrow for our 300 mile transit to Auburn AL where we’ll have dinner at Country’s BBQ.