Thursday on our last day in Cedar Key we pretty much just lazed around most of the day. Went out and had a nap in the recliners in the shade, Connie did a little work via email on her iPhone, and then about 1700 or so we headed off for a night out. After driving downtown and negotiating around the closed streets for the Halloween Party at the Island Hotel we got to the waterfront and headed into the Raw Dock Bar and Grill. We had a beer each…Neil had this really great chocolate/coffee stout named Midnight Oil and Connie stuck to a local Red Ale that I can’t remember the name of…Connie had a bowl of Clam Chowda and Neil had a half pound of steamed peel and eat shrimp. Once that was done we came home and since Connie was full we passed on our original idea of a Pizza from Island Pizzaria and Neil just grazed a bit. Along the way we had another beautiful sunset in Cedar Key. 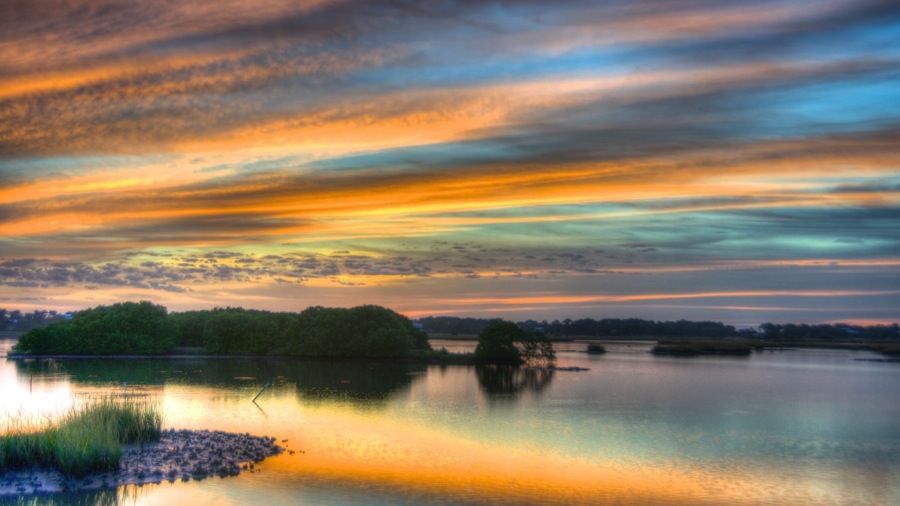 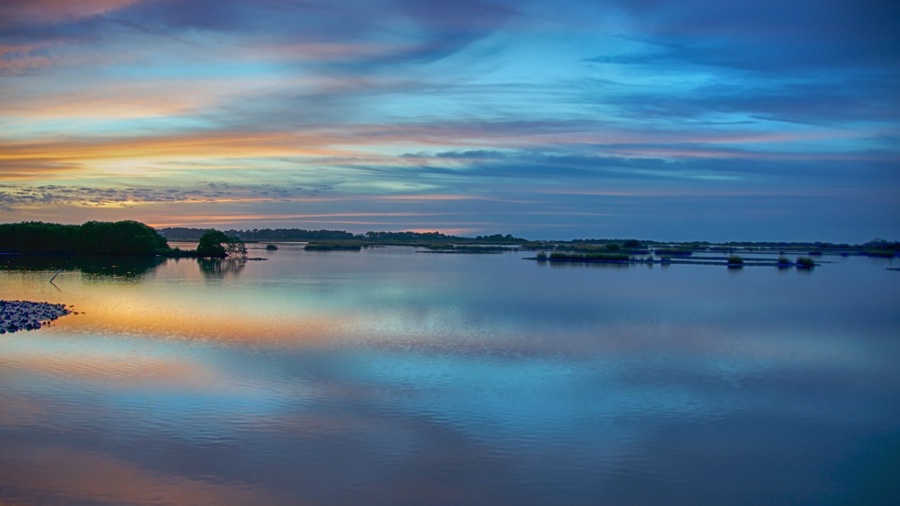 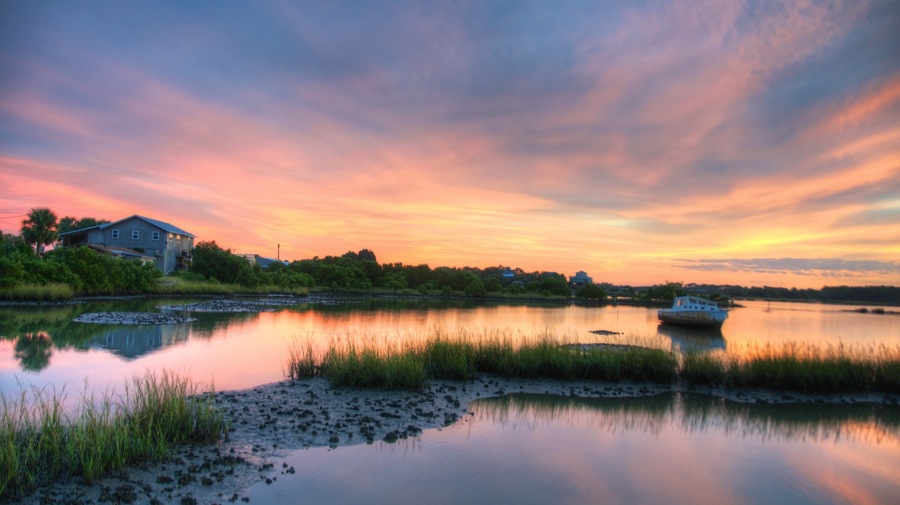 It’s really hard to get enough of those pinky orangey Sky Blue Pink © views…we were especially taken by the vivid blue reflections we were getting. After that it was TV and then off to bed.

Friday morning we got up, packed up, hitched up, and hit the road about 0930 for our 250 mile drive to North Fort Myers. We stopped for lunch at a Hess station along US-98 and picked up a Quizno’s sub that we carried on another 30 miles or so until it was lunchtime…by that time we were on I-75 and we stopped and ate. Once that was done we continued south and arrived here in North Fort Myers at the Seminole Campground about 1500 or so. After checking in we drove around to our site 101…it was really hot and we were both tired plus Neil had slept crooked the night before and his back hurt so we just did the minimum setup of utilities. After that we hit the pool for a quick dip to cook off then we ran one errand down to the CVS (cokes and drugs we needed were on sale) then we went to Hogbody’s Bar and Grill for dinner. After a couple Redneck Red Ales each (they were excellent) we had a set of 16 wings…8 each of Caribbean and Sesame…then came home. We watched some TV…Hawaii 5-0 and Blue Bloods are among our favorite dramas) then it was off to bed.

This morning we got up and after Coffee and breakfast we finished setting up the site for the winter. Here’s a shot of our finished setup in site 101…the only thing we don’t have up yet is our sign but that’s because we need to go to Home Depot and figure out a better way to hang it. 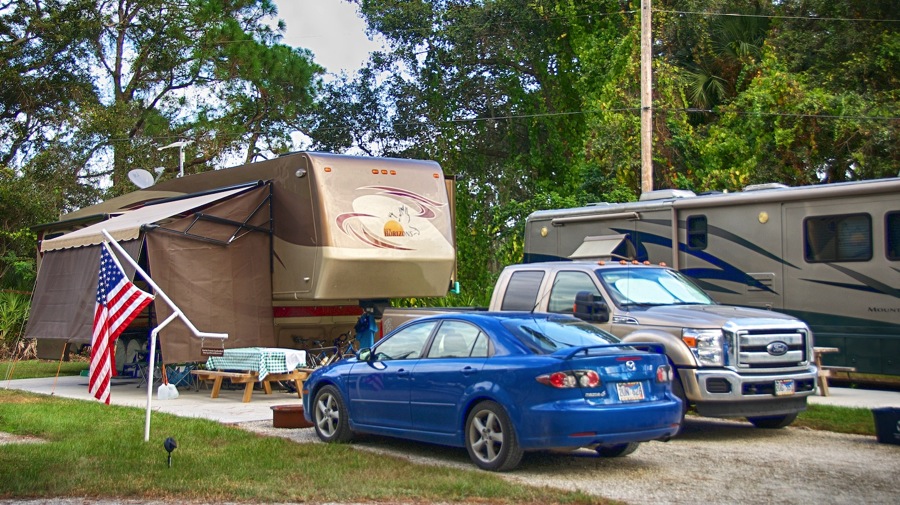 We have a couple of new additions to our setup…but we only use them when stopped for a long period as they’re a pain to get setup. You can see in the photo above we have a thing called a Sunblocker hanging from our awning…it’s staked down on the outside. We also have the Sideblocker hanging from the forward edge of our awning; it’s not staked down so we can walk around it. Both of these are mesh construction so they’re relatively waterproof but the wind goes right through them. They keep the sun off of the patio area…here in Seminole after about 1300 or so the sun comes past the front of the house and shines directly on the patio…having the screens up makes the patio much more like a screen porch and reduce the temp sitting in our recliners or camp chairs by at least 20 degrees. Neil also unloaded our bikes from the car, set up the grill, and all that jazz…he learned from his previous running into the kingpin to deliberately setup the area under the front of the house as an outside storage area and not a passage area…not walking through there will keep all of us from bonking our noggins.

After our setup was done Neil hit the pool to cool off while Connie had a shower and washed her hair…after that we just sat out under the awning until it was time for the football games to start…at that point we went in and watched the GA/FL game followed by the Auburn/Arkansas game.

Tomorrow is Mass at 0900 and a grocery run on the way home…then we’ll either clean the place (it’s pretty dirty) or else goof off and clean on Monday morning…don’t know which way we’ll jump on that yet.

Dinner tonight was Fusili pasta with Caramelized Onions, Pecans, Bacon, and Garlic…along with a couple glasses of wine.