Still Not a Dadgum Thing Going on

I hate to tell you this…but we’re now up to the third post of the new year and I _still_ don’t really have much to say for ourselves. We have had two colder snaps here in the past 2 weeks with overnight lows below 50…it ain’t s’posed to be like that down here ya know.

Anyhoo; Connie has been really busy with work, she needs to do her timesheet for the past 2 weeks today and will be pretty close to her maximum of 40 hours for the period…she has students going out in a few weeks and is still way short on the number of clinical rotation spots she needs. She keeps having great ideas for how to get more but none of them have been put into effect yet…so she doesn’t know what to do at this point. She’s a working on it though…and hopefully will figger it out.

Neil has been steadily chipping away on his house maintenance list ever since the holidays were over…killed 2 days washing the house, changed water filters, lubricated this and that, re-stained some scratches on our floor and cabinets that we got from slides moving and doors popping open while we were moving. He’s still got about half the list to go but whatever day he picks to get out the creeper and crawl under the house he’ll take care of a whole pile of them. Won’t be any trouble getting them all done though.

He’s also been working on our spring and early summer plans…and has turned the dates and destinations over to Connie so she can pick out parks for him to make reservations at. We’re heading from here to Jacksonville then up to Charleston for a Saint-Saëns concert, then to Fairfax to visit some friends and have a 2 day excursion to Philly for another concert. After that it’s down to Midlothian to see their human kids for a bit then over to Sevierville for the RV-Dreams rally and a visit with Neil’s baby sister. Then on to Louisville for 10 days or so followed by 3 weeks of as-yet-undetermined stuff before getting to Junction City in mid June.

From there we’re headed off for a vacation…still working on the details but will post them as soon as we finish figuring them out. Connie’s high school friend Margie is working them up for us…we’re currently looking at probably about a 3 week break while New Horizons fixes some minor stuff on the house and then they’ll just park it in their lot somewhere…as long as it’s got power for the fridge all will be good and it won’t cost us anything for storage. Score!!

After that we’re doing the upper Midwest in some sort of fashion. Connie has her ASCLS convention in Chicago the last week of July…Neil might go with her or might just stay home while she’s gone. We’ll end up after seeing WI, MN and whatever else we might run across in Amana, IA for the New Horizons rally in mid September then make our way back down to Fort Myers in some fashion.

I know that I posted our states visited, provinces visited, and countries visited last time…but as it turns out all 3 of them were incorrect.

For the state map I had our lone holdout of North Dakota as the state we haven’t been in…but Connie has been there already so that makes us having been in all 50 states. So I changed the map and we’ll keep track of all the states we’ve been in with the RV since June of 2011…up to 36 so far and we’ll hit probably 5 or 6 of the remainder this summer…but I’m guessing we’ll only make it up to 48 maximum as I know we ain’t getting the house to Hawaii and it’s unlikely we’ll get it to Alaska…that’s so far that we’ll just take a vacation up there sometime instead of the long trip up and back. We normally do about 8,000 miles per summer travel season and it’s over 4,000 miles round trip just from the Canadian border with Montana to the Canadian border with Alaska. Add in another 1,000-1,500 miles for the trip around Alaska and 5,500 for the round trip between Fort Myers and entering Canada in Montana and we would be talking 11,000 to 12,000 miles that season. While that is doable…it’s really a lot of driving and from Neil’s research the portion across Canada and Alaska is the hard part. We would need to do 5,500 to 6,000 miles between the end of May and the middle of September. Most of the roads up there have lower speed limits and there are lots of unpaved roads so 200 miles per travel day is about average. At that rate we would need 30 or so travel days and since there are only 110 days or so between June 1 and the middle of September we would end up driving way more days percentage wise. Still though…friends that have gone say it’s well worth it so perhaps we’ll reconsider things. I guess if we were to winter over in southern California two years that would cut the US portion of the trip down from 5,500 to 2,500…but it would still be a pretty travel intensive summer…not to mention the extra wear and tear on the house and BAT. So we’ll probably spend a month or so one summer and fly up there, rent a 4WD vehicle and see Alaska that way.  Here’s the revised States we’ve been in with the RV map. 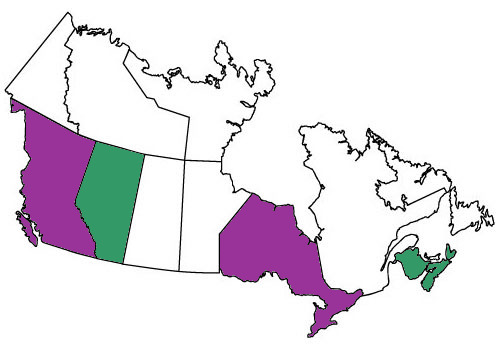 And finally the Countries visited map…missed Gibralter and Tunisia the first go round. It’s looking pretty good that we’ll expand this list on our upcoming summer vacation though.

I’m certainly glad I got that right now:-)

I keep reminding Neil to get up early and go get some eagle pictures but the eaglets are still too little to show up above the top of the nest…they’re bigger than Mourning Doves and smaller than chickens. They’re still only able to waddle about the nest and aren’t capable of feeding themselves yet…but they have gotten enough feathers that Ozzie or Harriet doesn’t have to brood them and keep them warm all the time. Neil just checked the eagle cam and they’re almost big enough to see from ground level…I’ll keep nagging him and hopefully he’ll get up early one morning and drive over for some shots. It’s only 4 miles or so from here but ya gotta get up early for best light and the adults ‘round here ain’t so good at that. In the meantime…here’s a shot of Harriet sitting right above the nest that I haven’t published before. You can see about the upper half to third of the nest at the bottom of the picture and the camera for the eagle-cam is on the limb to her left. You can tell it’s Harriet (a) because she’s bigger and (b) because she’s got that inverted V-shaped section of brown feathers sticking up into her white head area feathers…it’s just to her right from center. Neil did check the eagle cam and she was feeding the eaglets some fish this morning and their heads are almost up to the edge of the nest. As soon as they are walking around in another 10 days or so he should be able to get at least some shot of them. 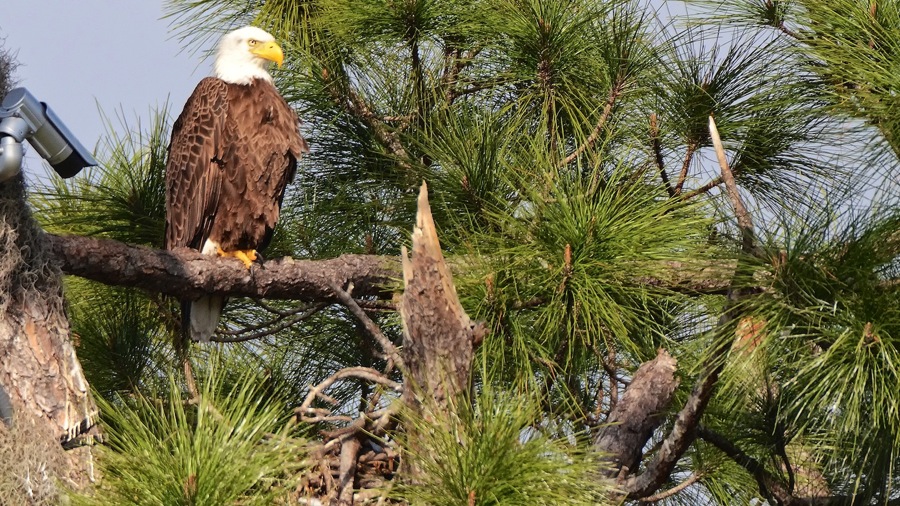 Not much else is new…it’s only going to be about 60 today so Neil thinks he’s just going to do a couple of simple/easy jobs off of his maintenance list. Connie won $33 at Bingo at the Elks on Tuesday and Neil got his new membership card for the lodge here in North Fort Myers…this means he doesn’t have to push the buzzer to get in any longer, just slide his card in and the door opens. Dinner will be the end of the Rotisserie Chicken (Lemon Garlic flavor) that he got from Walmart the other day. We’ve discovered that those things taste pretty good and are amazingly economical. He only paid $4.80 for it and they got 2 full meals so far and chicken sammys for lunch yesterday…and has enough meat, the rest of the tasty skin, and all the gooey gelatinized chicken deliciousness from the bottom of the tray left over for tonight. We’re having it with some Farfalle pasta and he’s going to make some sort of sauce to hold it all together for dinner. Connie’s got Bingo here at the park tonight as well.

Our TV died last Friday…looks like it’s the power supply and Neil is still trying to figure out whether it’s worth fixing or whether we need a new one. It’s out of warranty of course but we figured if it’s less than about $250 or so for the repair we’ll have it fixed as it’s over $600 for a new one in 40” size and almost $1000 for the new one in the same 46” size as this one. We can’t really use the new 46 inched on our lift though…the size is slightly smaller and while it would physically fit the sensor for the remote would be behind the edge of the cabinet and we would have to get up to turn it on and off. We’ll have to wander down to the Walmart and look at a 40 and 46 side by side to make up our minds if we end up having to replace it…hopefully we’ll get the final word from the repair place today and know whether fix or replace is the right answer.

This paragraph and photo were added later…this is the best tweet I’ve seen in a long time. A big shout out to @mcfuckingduff (whoever he is), it was retweeted by one of Connie’s bike  racing podcasters and we both thought it was great. The tweet said

“Look at this fucking squirrel. He is completel *over* all your bullshit and has no more fucks left to give. 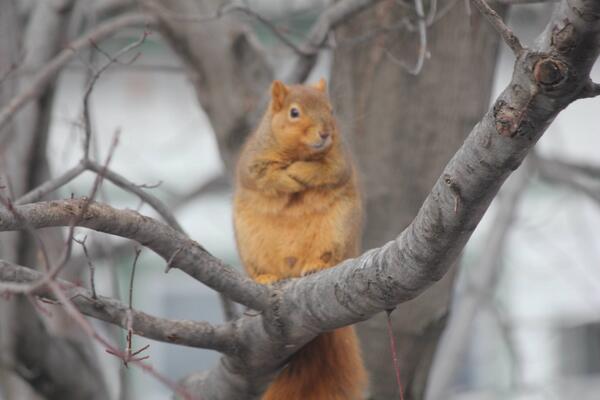