We’ve had a pretty good week here in Carlyle, IL. Wednesday Connie worked at home…but was really frustrated by slow internet…she was working with some large jpg files that were scans or photos of paperwork that students were submitting and the file sizes were making opening, saving, and closing excruciatingly slow. Neil finally showed her how to reduce the file size and things worked better but it was still pretty slow. Thursday we drove into Carlyle and visited the library for some faster internet…Neil had a bunch of IT Department stuff to do for our various computers and Connie worked more. Eats-wise we had pizza from Walmart on Wednesday and a chicken rice Jambalaya sort of thing that Neil invented on Thursday night.

In the meantime Neil got a couple of pictures of a Great Blue Heron here in the campground…it was just across the marine inlet from our site 7…it was getting on towards dark when he got them though and he had a hard time picking it out from the background originally…in the late afternoon gloom the grayish bird kind of blends in with the gray rocks forming the breakwater that protects the marina…the third shot it was sort of shaking itself off when he snapped the shutter. 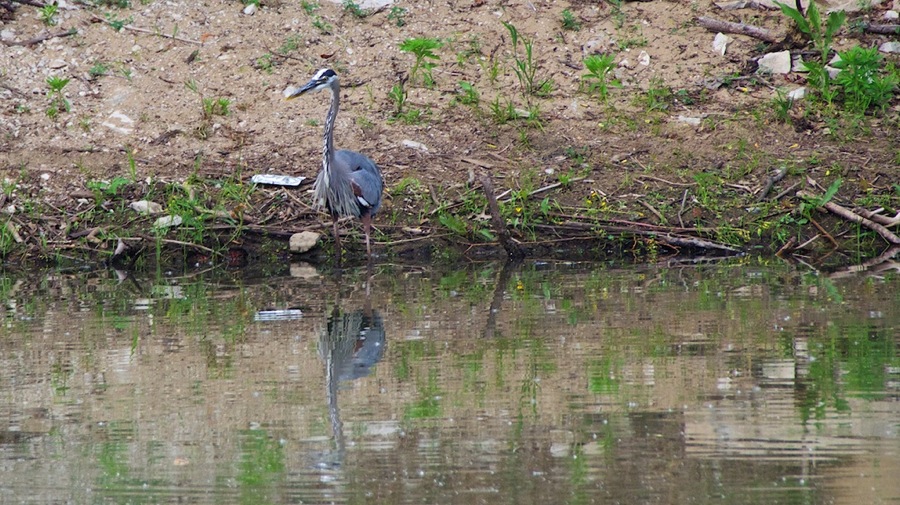 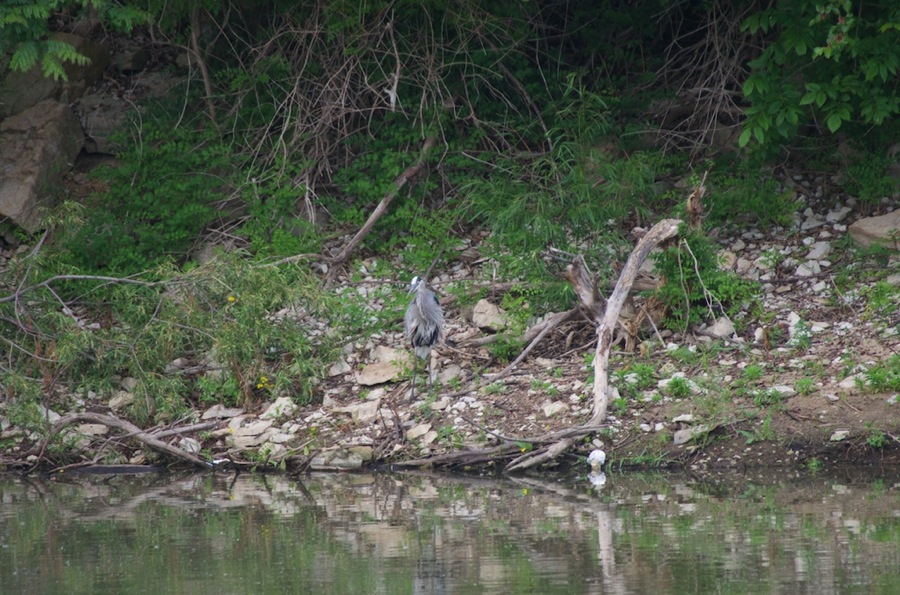 Friday we decided to have a Fun Stuff© day so Connie picked out a total of 3 hikes for us; a 2.5 miler and a couple of half milers. The first 2.5 miler was supposed to be at Eldon Haslet State Park…but when we got to where the hike was listed on the map it wasn’t there…and by the time we found where it really was and read the description (lousy views, muddy, and skeeters aplenty) so we blew that one off. Good thing we did as shortly after we left the park for stop number 2 it poured rain for 20 minutes or so. We did get a few shots on the way into the park though…another Great Blue, a mating pair of Mute Swans, and a Canadian Goose; all of these were located within about 100 yards of each other in a pool we passed on the way into the park. 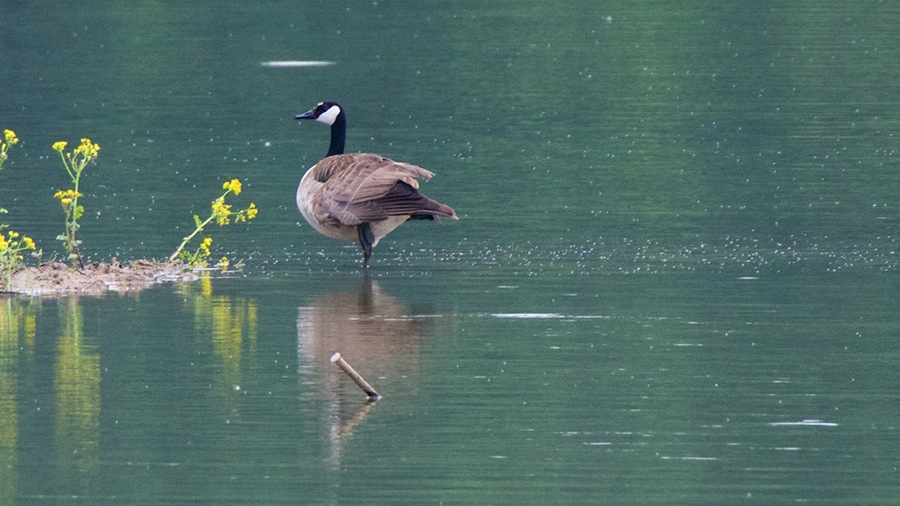 By the time we got to our next stop which was the Little Prairie Nature Trail located immediately south of the dam that forms Carlyle Lake the rain had stopped…but with the sun out the rain was quickly evaporating which made the humidity pretty brutal for the hike. Nonetheless we pressed on and after dousing ourselves with insect repellent to keep the skeeters down we headed out. Right out of the parking area we spotted a number of Red Wing Blackbirds…Neil got some nice pictures of both a male and the female he was trying to entice into mating with him. Didn’t look like she was having too much to do with that idea though as she kept flying away whenever he came near her…but maybe she was just playing hard to get. 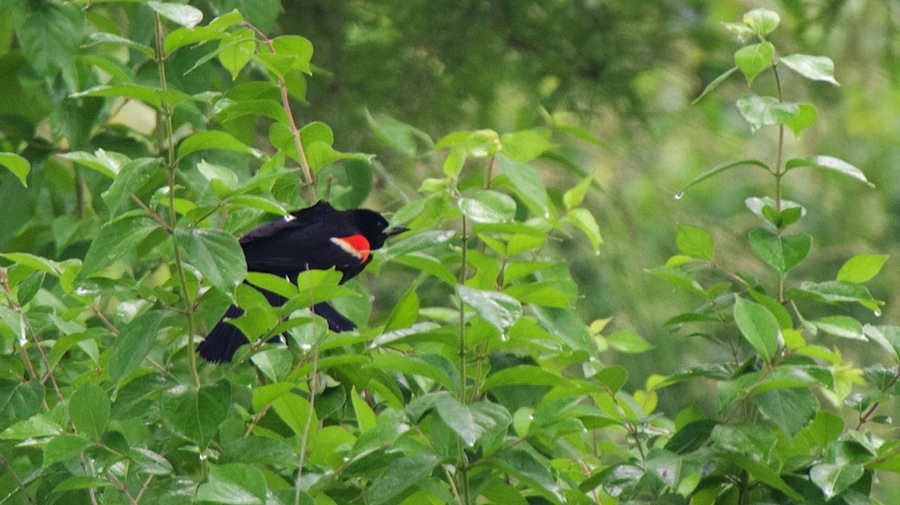 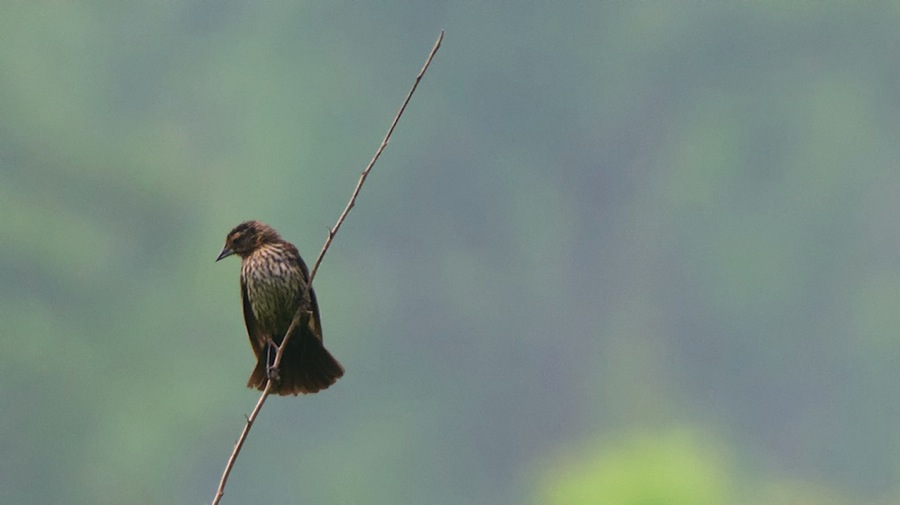 We also spotted some colorful wildflowers for Connie. 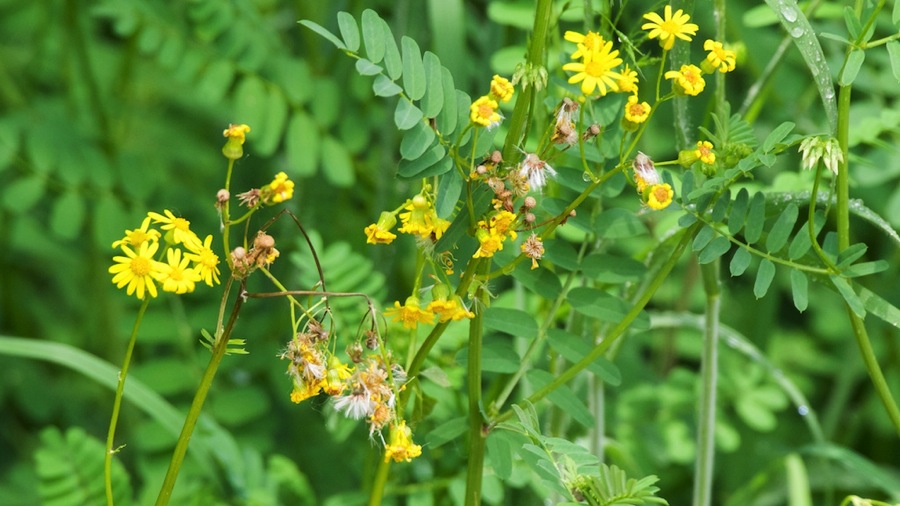 And as we headed towards the turn around for the loop trail we spotted some more Redwing Blackbirds…this pair appeared to have mated and constructed a nest which they were guarding. The female was sitting too far away to get a decent picture of though…so here are some shots of the male sitting, displaying, and then a short flight sequence of the male. 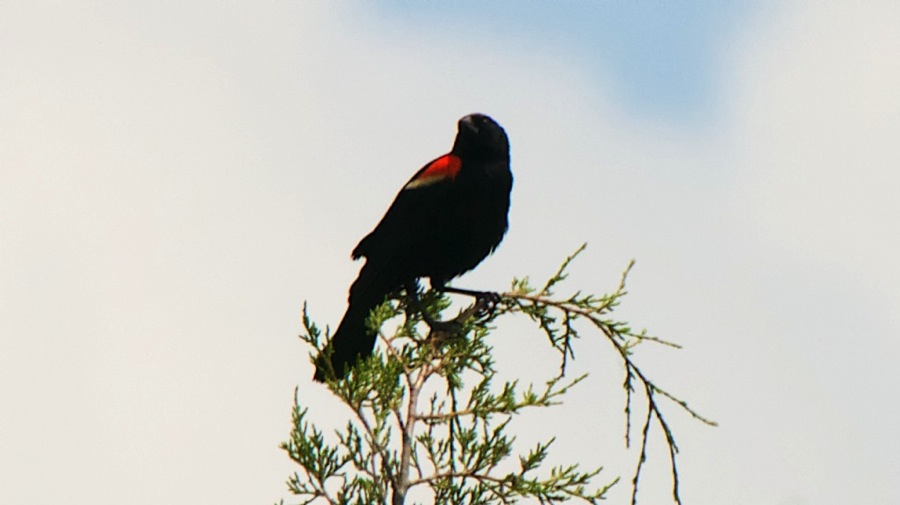 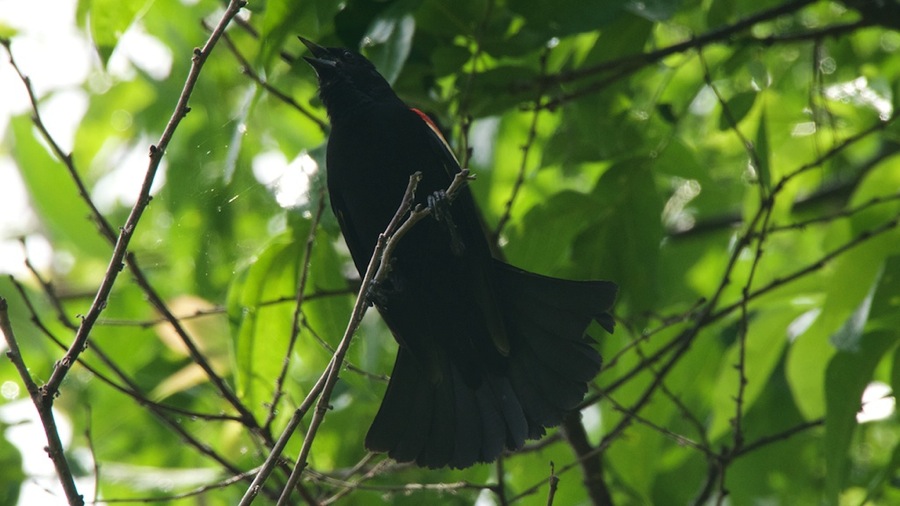 This portion of the hike had been all along a fairly open area but shortly after passing the next above the trail did a 180 to the right and headed into a more wooded area and followed pretty closely a small stream until we got back to the parking area. Along the way we spotted a male Cardinal and a female Robin…she must have a nest with eggs nearby as she was doing a little dance designed to lead predators away from her nest…she would flutter along 5 or 10 feet and as you caught up to her she would flutter another few feet…staying just out of your reach but leading you away from the nest area; when she decided she had led us enough away she flew off and returned to where we had originally spotted her. In this case she basically was leading us up the path. 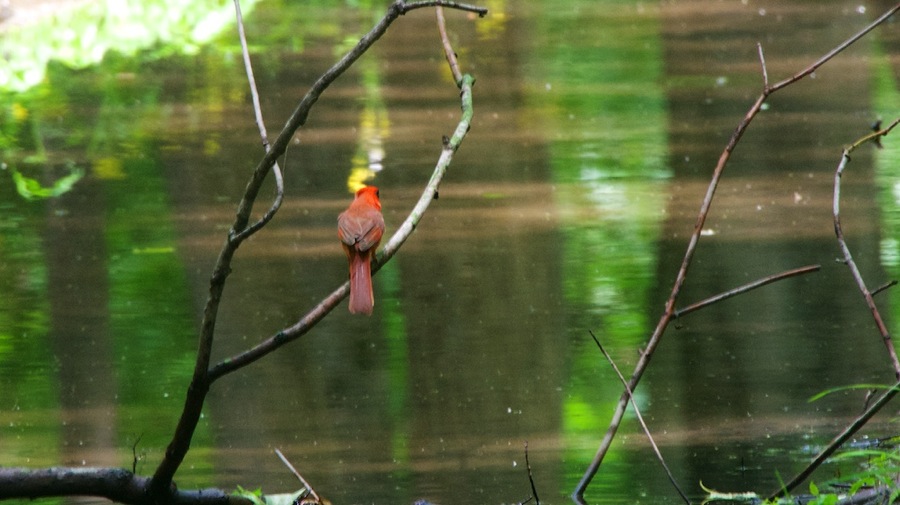 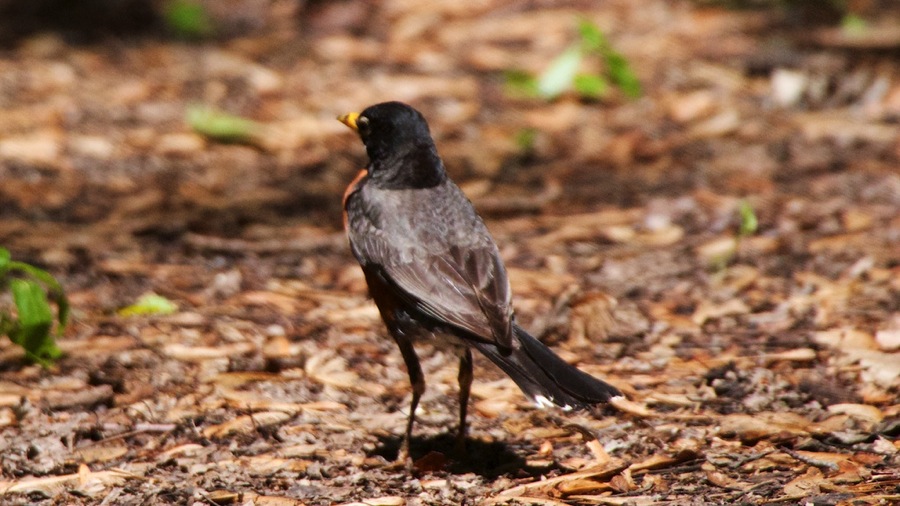 We heard plenty of those taunty birds in the woods as well…singing their heads off but we didn’t spot any of them (as usual). After getting back to the car we headed for our third hike…which turned out to be another walk through the campground bust so we again passed on that one. By this time we were across at the east side of the dam so we stopped for a snack and saw a mink carrying a fish it had caught for dinner. It passed just about 10 feet from our car where we were sitting and Neil immediately jumped out with the camera but by the time we saw it again it was 50 or 60 yards away along the rock bank so if it was lunch it was taking it home to it’s den to eat or give to it’s young. Another species to add to our life list😄 We also got a shot of the dam itself…the mink was running along the rocks in the foreground when we got it’s picture and the straight rock wall in the background is the dam; you can just barely make out the upstream side of the spillway area at the far end of the dam.

We then drove down the road just on the downstream side of the dam over to the spillway area where we got a picture of the dam, a picture of a young lady fishing, and a picture of a guy fishing in a decidedly non-regular manner…he was using a compound bow and after a quick google and seeing some pretty large fish breaching in the downstream area we decided he was most likely looking for Asian Carp…one of those pesky invasive species we have been troubled with over the past couple of decades. 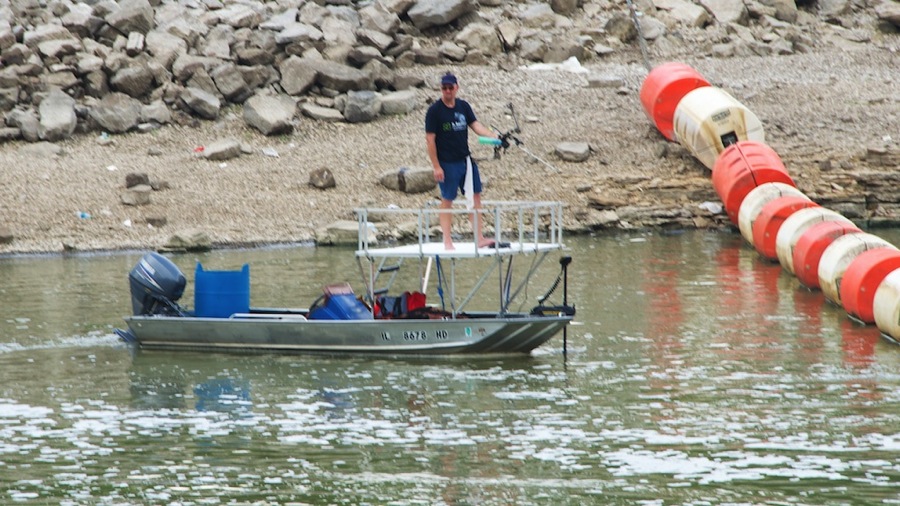 With that our day was almost done and we headed back towards Carlyle about 2 miles west of the dam for a brew and a late lunch/early dinner…but on the way we stopped by the site of the old General Dean suspension bridge over the Kaskaskia River at the east side of Carlyle on the old Goshen Road…the road is now abandoned but back in 1859 the bridge was constructed so that folks using the road wouldn’t have to use the ferry or mud bridge. After the Civil War when the US-50 bridge was built about 100 yards downstream the bridge fell into disrepair but it was renovated as a pedestrian only bridge in 1951. It’s a 280 foot long bridge with 35 foot tall towers. 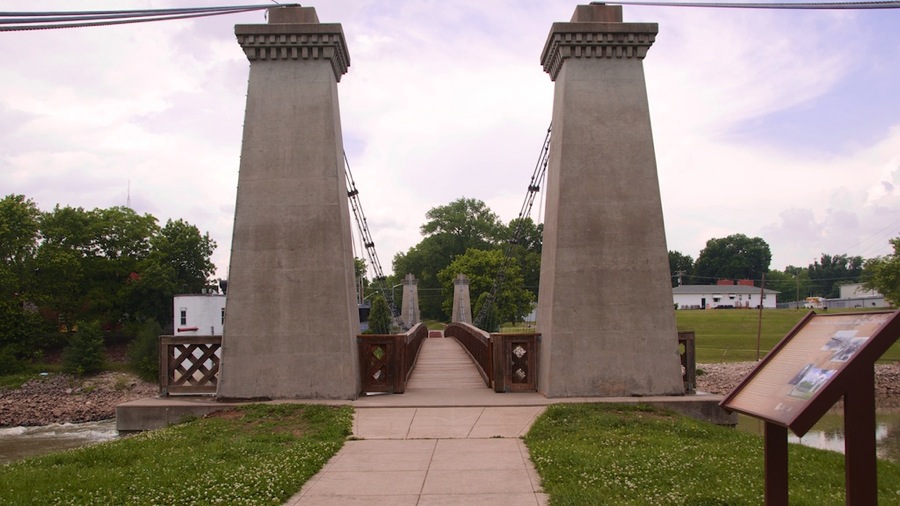 Neil got one last shot of the water running over a rock pile across the river just below the bridge…he’s guessing that this used to be the mud bridge back in the day.

With that we headed off to LuBar for another Saluki Dunkeldog Ale…to go along with it we had a nice dinner salad (Connie) and a bacon cheeseburger for Neil. After that we came home and called it a day…we drove home through a serious downpour…Neil had to slow down to about 15 or 20 miles an hour to see where he was going. Fortunately we ran out of it before arriving home…but we could tell it was coming so we quickly brought in the awning before it rained and just barely made it inside before it again poured.

Today we headed out about 1000 for a kayak trip on the lake. After getting the boat inflated and some water packed up for us…we launched right out back of our campsite and headed off through and out of the marina then headed south in the lake a mile or so before deciding to turn around and head back. We had a pretty stiff paddle upwind the last half mile or so into the marina and were really glad to get back. Neil left the boat inflated but tied it down in case we want to go out again tomorrow. After hosing some serious clay/silt muck off of both the boat and ourselves…Connie thought it was a bit nippily when Neil sprayed her and he agreed when he sprayed himself…we came in and got changed then lazed around the remainder of the afternoon.

Dinner tonight (and again tomorrow night) will be some country ribs that Neil’s going to grill unless it pours again…which is a definite possibility looking at the radar; we’re having some Rutabaga for Connie and carrots for Neil to go along with it. If he can’t grill then he’ll just have to cook them inside…they won’t taste as good but ya gotta do what ya gotta do.