That’s it. I’m done. No more blogging for me. Nosirree, absolutely none.

Until the adults get back from Ireland that is.

Had ya goin didn’t I?

Yup, despite my protestations to the contrary that I would fit in just about anywhere…Neil and Connie said that they don’t have enough room in the suitcase to stuff me in…and are just taking Kara on their trip and leaving me here to guard the house while they are gone. Lucky her…she gets to go all the cool places while I just have to stay home and mind the store. Oh well…guess that’s what guard bears are for since a guard Golden Retriever is pretty much worthless. As Neil and Connie know from the original Kara v1…a Golden retriever would bark furiously whenever the burglar came around…but only so he would come over and pet her. Once that was accomplished she would happily assist him in stealing us blind as long as she got some petting out of the deal. Some guard dog she would be…grumble, grumble, grumble.

Anyway…they got all packed up for their trip yesterday and hitched up BAT to the house. Got up early this morning at 0530 and hit the road. After a quick stop at Denny’s for breakfast we hit the road just about on schedule at 0800. We skipped passing through downtown KC as it’s (a) a nightmare and (b) you end up paying tolls on the Kansas Turnpike that way…we got off on Kansas 10 instead and passed south of the city then joined back up with I-70 once we were past the toll portion.

We rolled into Junction City around 1430 and parked at Camp Horizons. Spent the afternoon getting all ready for the upcoming maintenance and upgrades, had dinner with their friends Ed and Lynn who are still at Camp Horizons from May 30 then finished the last bit o’ packing with the toothbrushes and such. Camp Horizons is absolutely full…we got the last available parking spot with power.

We had a nice talk with their friends Ed and Lynn who are at Camp Horizons picking up their new Majestic…including a quick run over to a local eatery named Coaches…then adjourned back to the rig for wine and more talk as well as discussion about their pickup adventure. The factory is behind and Neil thinks they’ll be lucky to leave by the time they get back from Ireland on July 7.

Saw this cute cartoon on the net this week and thought I would pass it along. Name was The Science of Food. 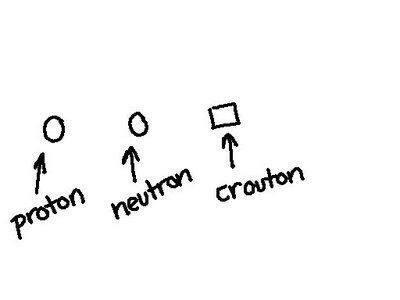 Tomorrow they’re seeing Ken from New Horizons early then heading off by about 1000 or so for the 2 hour drive to Kansas City. The flight to New York doesn’t leave until after 1700…so Neil is seeing Oklahoma Joe’s for lunch in their future on the way to the airport.

With that, I’m turning the blog over to Kara (lucky bitch) for the next 3½ weeks…lucky dog will get to see cool stuff, drink Guinness and other Irish beers and likker, eat lamb and taters, and everything else cool. Don’t worry about me none…I’ll just be here watching the welding sparks fly, paint dry, and other assorted repair/upgrade stuff. Bummer.

Luckily I’m sending my nephew along…just in case they need some protecting while they’re overseas. It is my great pleasure to introduce Sir Winston Paddington Nigel Gerheart Bear.

Thursday morning they got up, finished the last of the packing, met with Ken about their repairs and upgrades and headed for the airport. Ken insists that all will be finished by the time they get back but both Neil and Connie are taking the “we’ll believe it when we see it” road for now.