Ya Know…It Ain’t As Far as Ya Think

Today was a really, really good day…the best we’ve had on our trip by a large margin.

To start with…the weather was beautiful. We’ve been mostly dry but cloudy and overcast through the first 4 days of the trip but today was brilliant blue sky, temps in the 70s, a little breeze to keep it pleasant and no humidity to speak of.

We arose at 0630 and after waking up sat down to breakfast with our host Gretta right about 0800. Yogurt and granola (normal for Connie and tropical fruit for Neil) we had some poached eggs and bacon on toast along with pretty decent French press coffee…Gretta makes better coffee than the Kilronan house did. Once that was done we reorganized our luggage a bit so we can leave two of our bags in the car while on the driving portion of the tour…much easier to get in and out of hotels that way. Once that was done we headed out on our travels…but before I get to that Connie insisted I post another picture of the waterfall from yesterday…yesterday’s post was a closeup and she wanted one that showed the entire series of falls in relation to the cliffside for a sense of scale. The total drop is probably 250 feet but as you can see it’s one of those cascading sort of falls with no open drop. Still gorgeous though…and while a shot in bright sunlight would have been nice the gloominess really sort of brings out the Irishness of this country…it’s a lot like Scotland with more overcast days than not and lots of fog and gloom…which just makes for moody photos.

With that done…let’s get into today’s travels. We essentially did a loop south then east then north back to our starting point and hit a couple of nice spots along the way including one of the must do’s for Connie. Our first stop was at the Catholic Holy Cross Abbey in Holy Cross. This abbey dates from 13th century and was abandoned for many years before being reestablished as a functioning parish in 1975 and restoration work has been ongoing since that time. 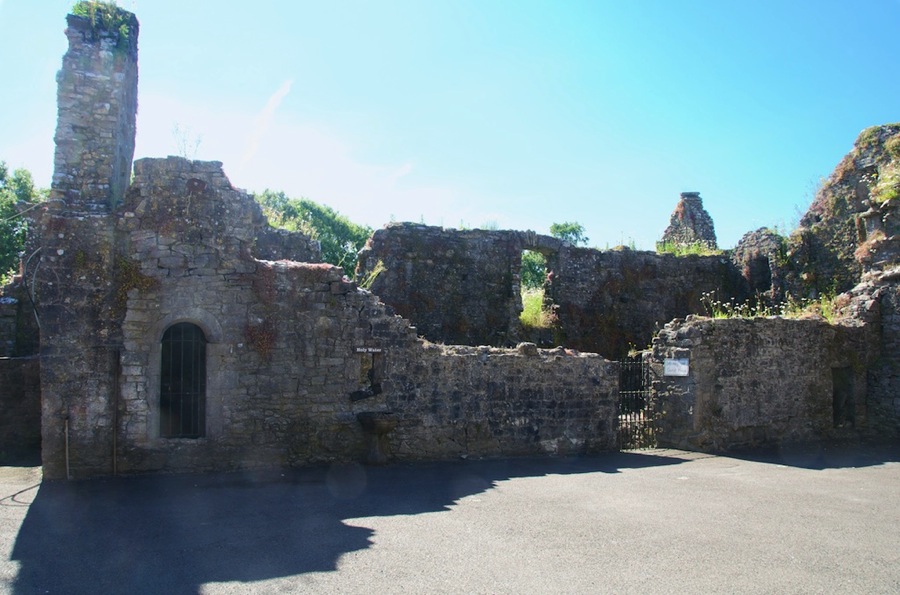 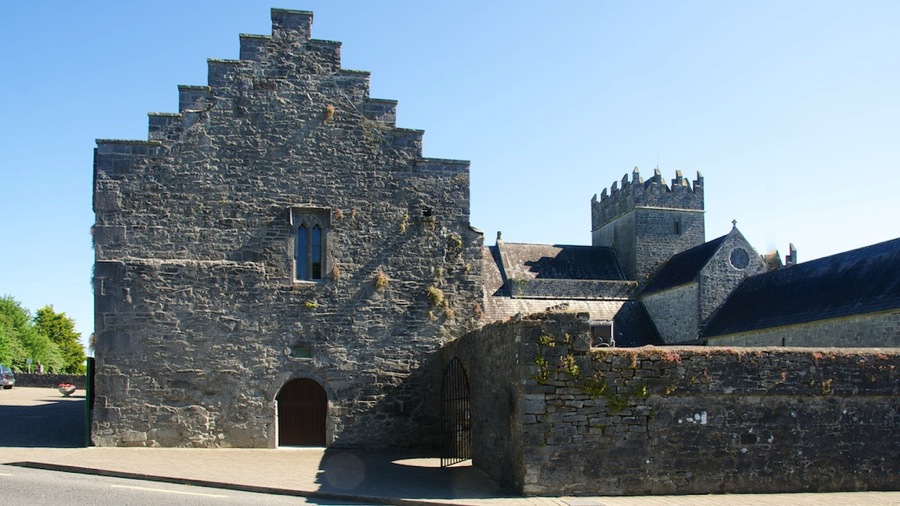 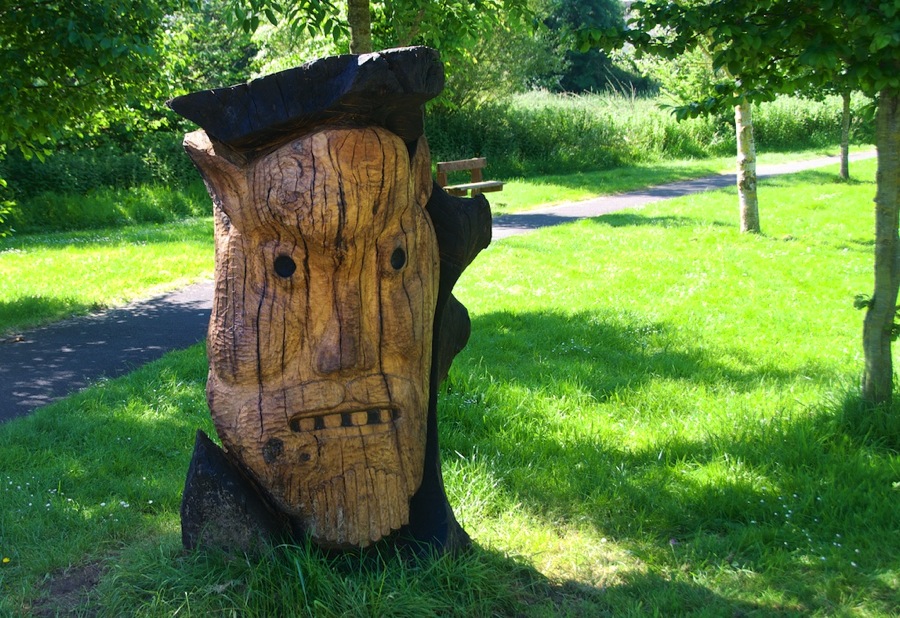 Our second stop was the Rock of Cashel…which turned out to be a huge rock out in the middle of a valley. Back in the day it started life as a castle…then once the land was pacified it was converted to a cathedral. The buildings date from the 11th and 12th centuries and are pretty much in ruins now…roofs and ceilings are gone and lots of fallen stone. There is a conservation effort underway but it’s a preserve, not restore process at this point.

The view from down on the valley floor…clearly it was a great place to have a defensible fortification. After that is the corresponding view from atop the rock. 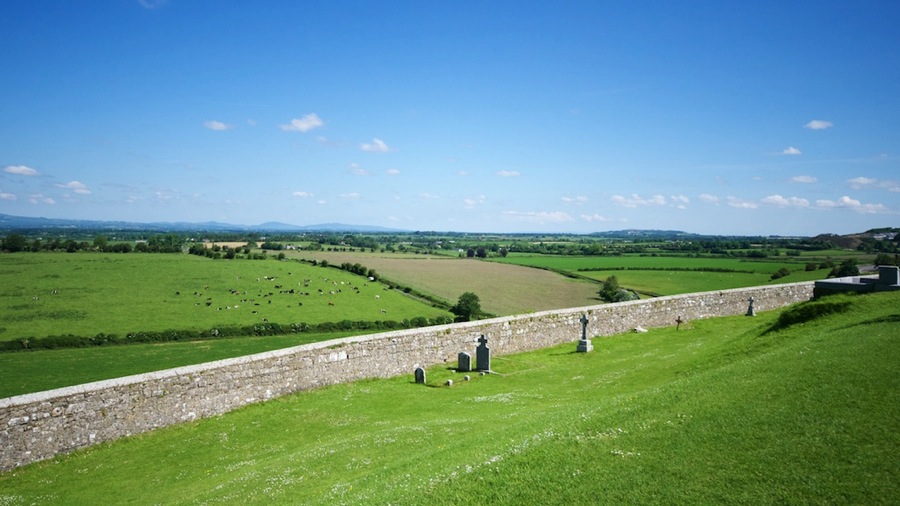 And some views inside the ruins and around the grounds on top of the rock…including some photos of 9th and 11th century altar equipment. 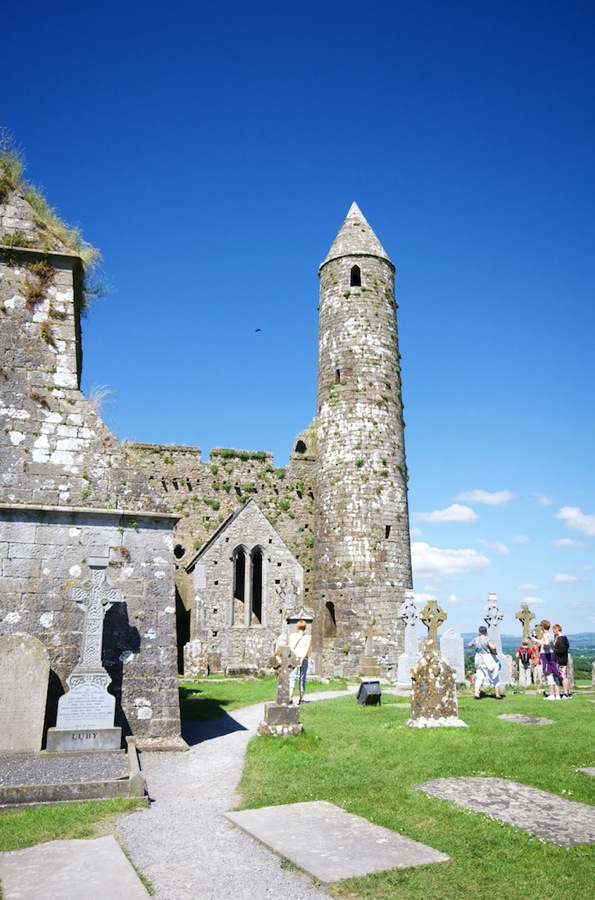 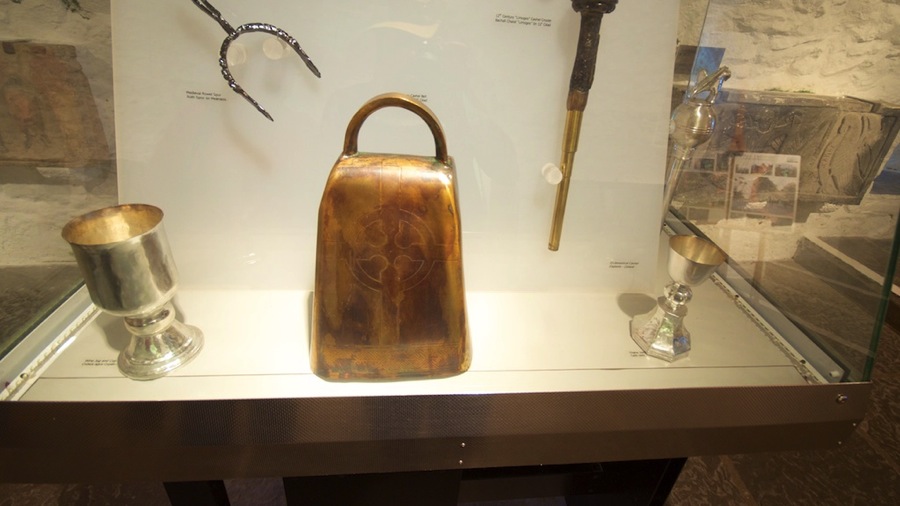 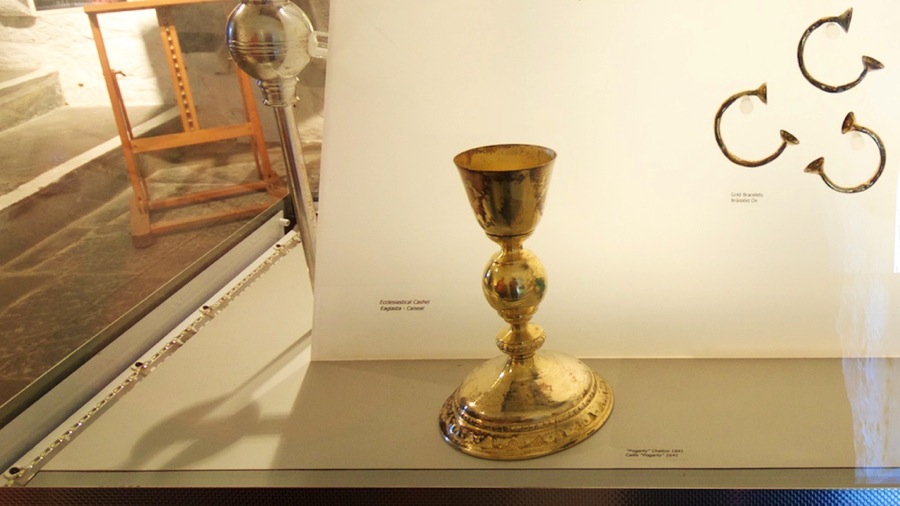 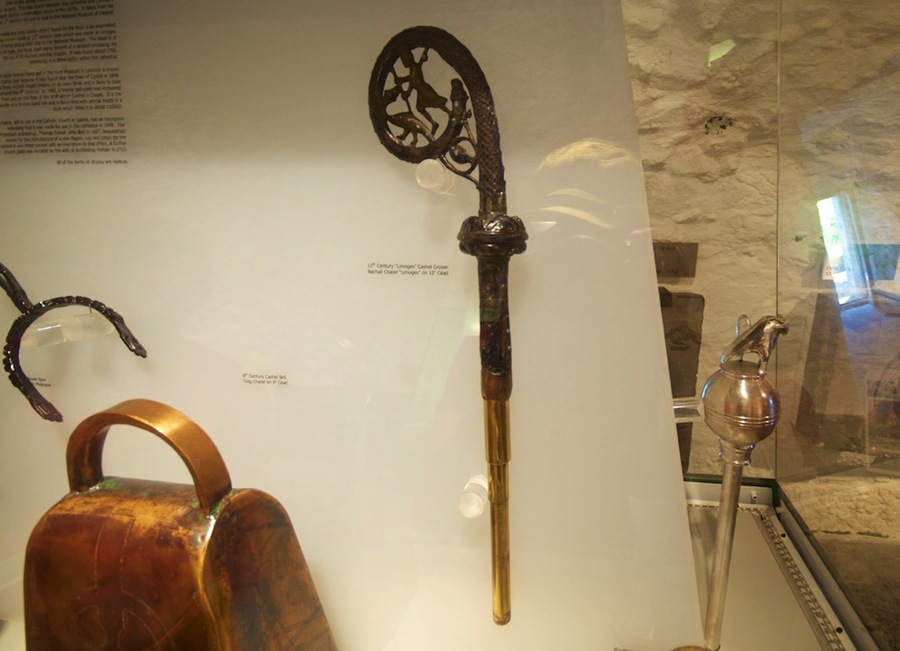 Moving on from there we stopped by Cahir to check out cathedral from afar and the castle…including a moat with swans in it and a Great Blue Heron on the river which forms part of the moat. 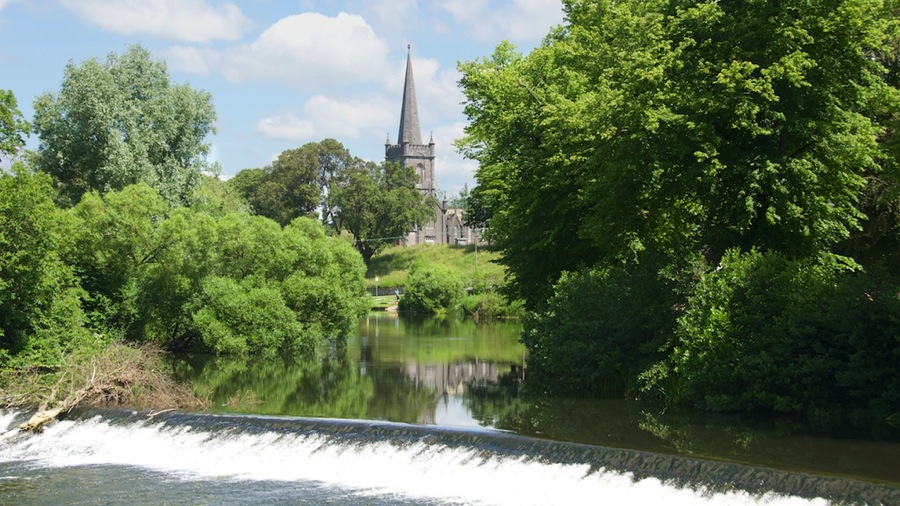 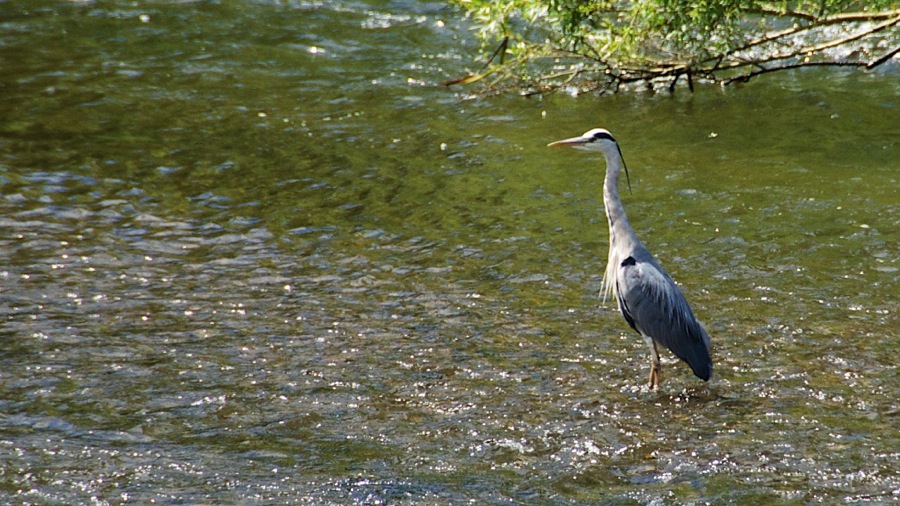 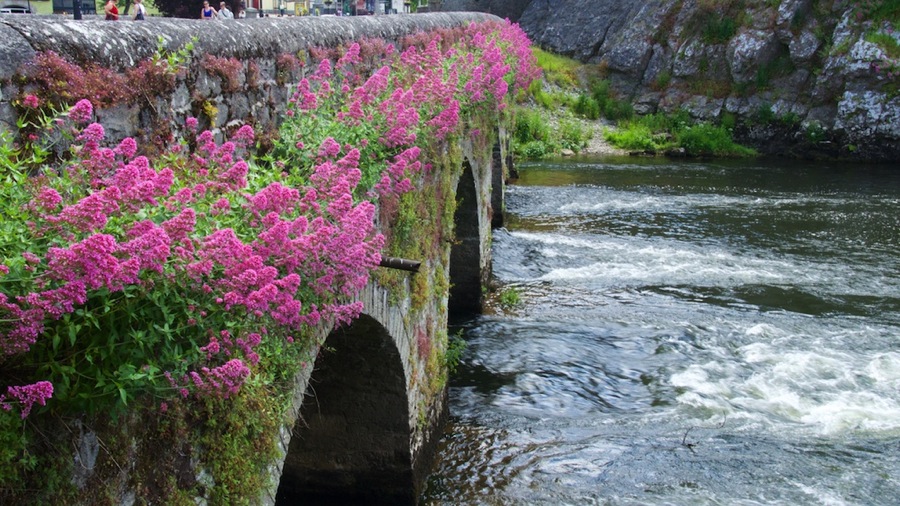 From there it was off to lunch at Sean Tienney’s Pub in Clonmel…where we had a great chicken sandwich and a couple pints of Bulmer’s Cider. Yum.

From there we drove on over to Waterford and visited the Waterford Crystal Showroom…we decided to skip the tour as the showroom would be closed by the time we were done and Connie only wanted to look at the pretties anyway. Didn’t buy anything…she wouldn’t buy anything without Neil’s approval and he thinks that Waterford Crystal is mostly ugly. The few things he does like are all super expensive (like more than $10,000).

Finally; we headed back toward the hotel and stopped in Kilkenny for dinner. After stopping…we grabbed a few pictures along the riverfront after parking the car. 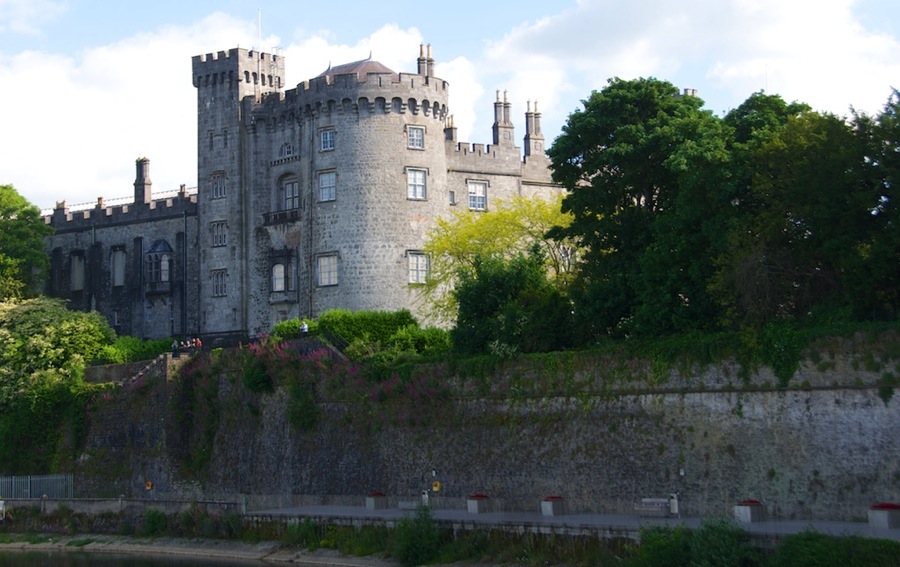 After that we headed into Matt the Miller’s Pub and Restaurant which is in the round turret shaped building in the sort of foreground on the far left side of the last picture above…and had what we was far and away the best beer we’ve had in Ireland and the best meal we have had here as well. Kilkenny Cream Ale…sort of like Guinness in consistency and fine creamy head but more of a medium red ale instead of a stout. Outstanding. Dinner was two appetizers…stuffed mushrooms and oriental chicken wings, each came with a small salad in the middle of the plate. Following that was the best bread and butter pudding we’ve had ever had outside of what we make at home. Irish bread pudding is a lot more bread and less custardy…exactly the opposite of the bread pudding that Neil grew up with his mom baking…but it was really, really good. Topped with some cream sauce and vanilla ice cream. Even more yum than lunch or the beer…really, it was that good. The three dishes we had were much more restaurant quality food than your typical bar food you get in pubs.

Finally, a couple of shots of the mare and foal living in the fields outside our B&B here at the Bungalow Farmhouse.

Now I know ya been thinking about that title and wondering to yourself “Just what the heck is he talking about.”…so I’m a gonna tell ya.

If you had to pick an Irish song that everybody knows your first choice would either be Danny Boy or that other song…you know the one that talks about it being a long way to someplace? Well, despite the song and despite any other evidence to the contrary…it ain’t a long way to Tipperary, it’s just 6 kilometers. It was like…and then it was like…and then we were there. 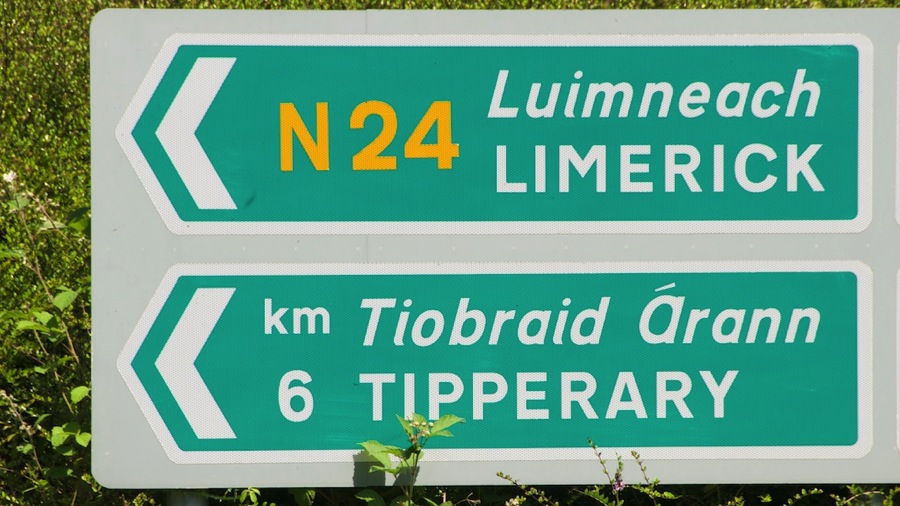 So…yeah…it ain’t as far as ya think it is after all. Tipperary Ireland…a nice little town and we even found a hardware store to buy another AC outlet adapter for ourselves.