Another excellent day overall…we’re sitting here in our turret based sitting room at the Troy Hall B&B in Derry…it’s full formal name is Londonderry but it’s just Derry for short…this is a pretty swanky place…pictures and description of it later in the post.

After breakfast we packed and headed off…I gotta tell ya the Sligo Park Hotel was the least nice place we stayed so far on our trip. It was a decent hotel but had a modern feel to the architecture and decor and could have been an upper middle class hotel anywhere…not a bit o’ character to be found anywheres.

As we headed north again around Ben Bulben…Neil noticed it was another beautiful day…I think we’ve used up Ireland’s quota of nice days for the rest of the year at least while we were here, it’s been amazingly nice weather for Ireland…so we stopped and got a final picture of the southwest face of Ben Bulben through the trees as we passed. 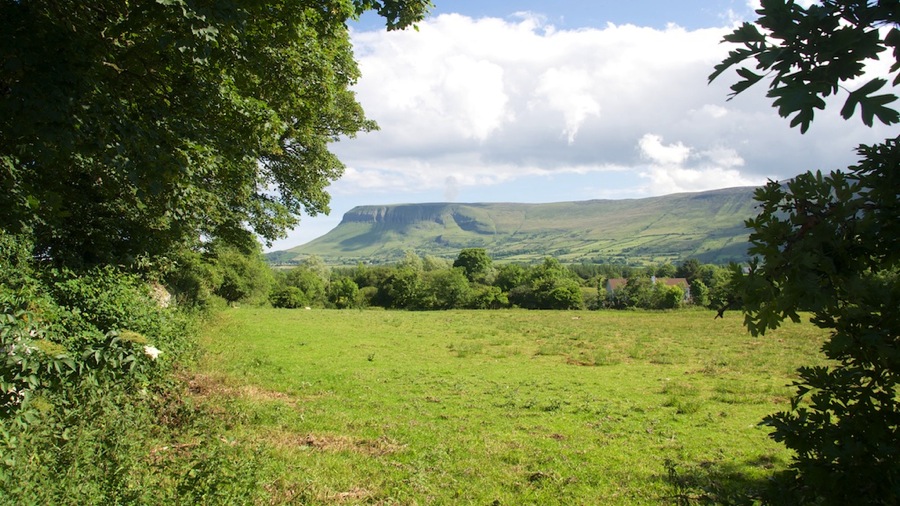 From there we continued on through another succession of small towns…and it seemed like there were waaay too many slow drivers out and about today along with farmers and their tractors…although at least the farmers would move over and let you pass more easily…and after about 120 kilometers total pulled into Glenveagh National Park. Connie had convinced herself that it was right at the end of this lake and when we pulled into Church Hill there was this lake over on the left…we got to the end of the lake and no park. We did spot a sign that said national park 13 kilometers and headed that way…but it was on a little bitty road (imagine that, a little bitty road in Ireland of all places…sheesh) behind a truck of gravel and she wasn’t feeling too good about it. Turns out that it was the wrong lake…it was Gartan Lough instead of Lough Beagh but pretty soon we got around the grave truck, saw a bunch of cars coming back from the other direction so we figured we wuz on the right track, and lo and behold pulled into the park…thus completing a clean sweep of all 6 Ireland National Parks…Wicklow Mountains, Killarney, The Burren, Connemara, Ballycroy and Glenveagh. Wicklow Mountains is the largest at 79 square miles and Glenveagh second at 66. The Burren is the smallest at just under 6 but is just a portion of the bog land that it represents.

I gotta tell ya…we clearly saved the best for last. Glenveagh had the nicest visitor center and set of exhibits of any of them and far and away the best view of any of the parks here…beautiful as we looked southwest out over Lough Beagh. Here are a couple of shots of the view…Neil carefully made sure none of the French Tour Bus occupants got into his picture. Me and Kara even posed for a shot. 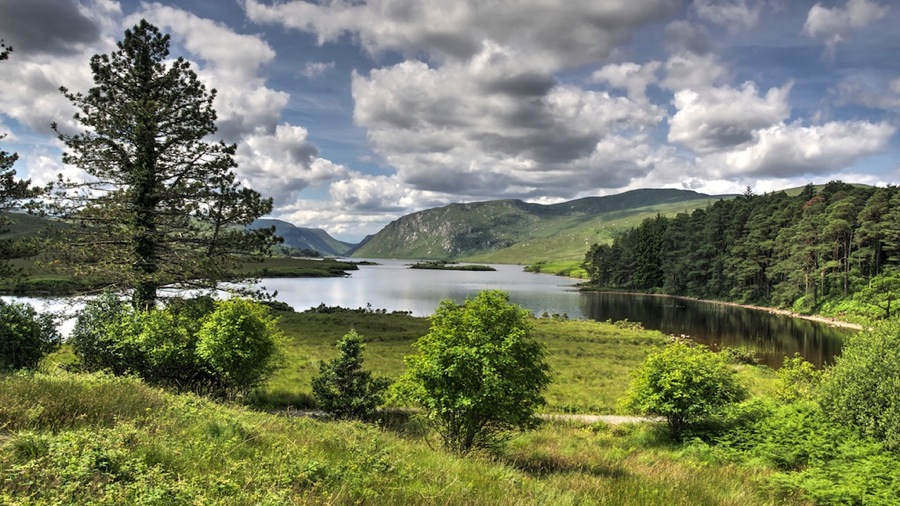 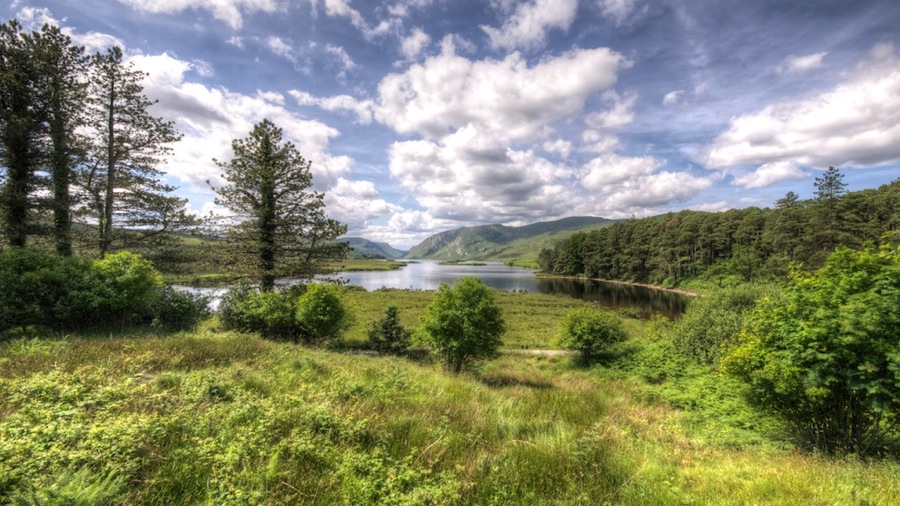 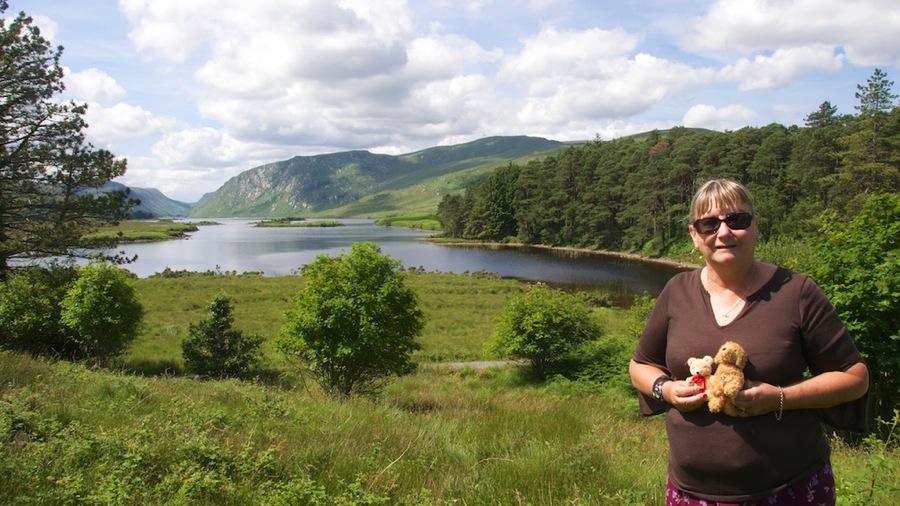 Afterwards we wandered in and watched the audio video presentation on the Glenveagh Castle…we didn’t go see it since it was a paid shuttle bus ride down and back and we were a bit pressed for time since we were getting hungry.  Here’s a photo of the castle itself Neil found at http://landedfamilies.blogspot.co.uk/2013/03/22-adair-of-bellegrove-and-glenveagh.html. It sits right on the edge of the lake. 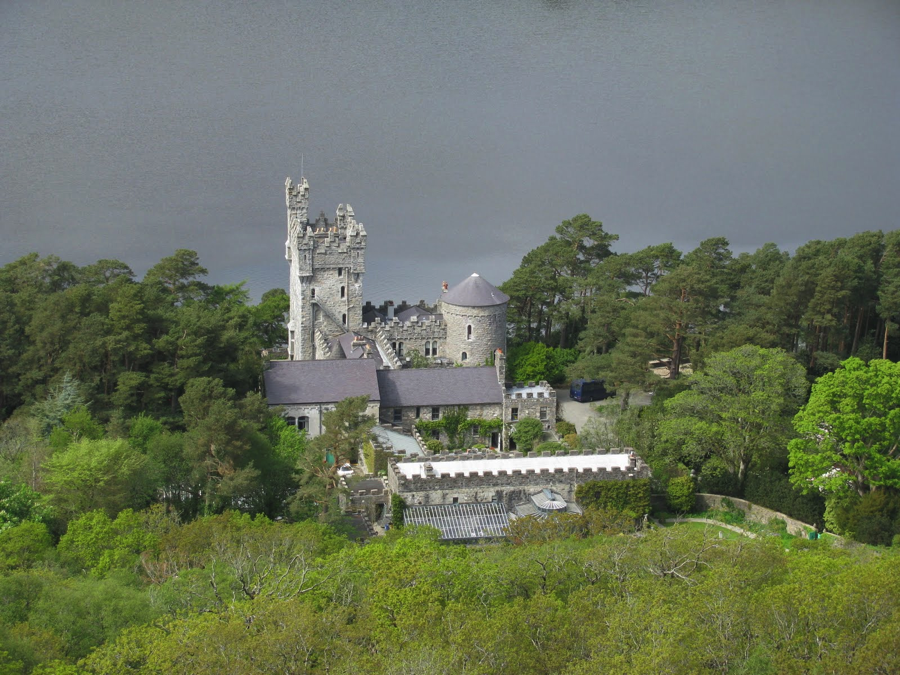 Following that we decided to stop and eat so we stopped at some little town at a place that clearly said Bar and Restaurant on the sign. We went in and the barmaid was gone but one of the helpful locals pulled us a Bulmer’s from the tap. After awhile the barmaid returned (hey, it was the local’s term for her, not mine) and told us that contrary to the sign there was no food. So we went next door into the Spar and got a bag of Sour Cream and Onion Tater Chips and had that.

Another hour down the road and we pulled into the Troy Hall B&B and met our host Ann…this is quite a nice place and best of all the night life is just own the hill so no driving required. We’re in the Belmont Suite and have a double bed, two single beds, a huge bathroom, and a sitting room in the turret on the corner of the building. 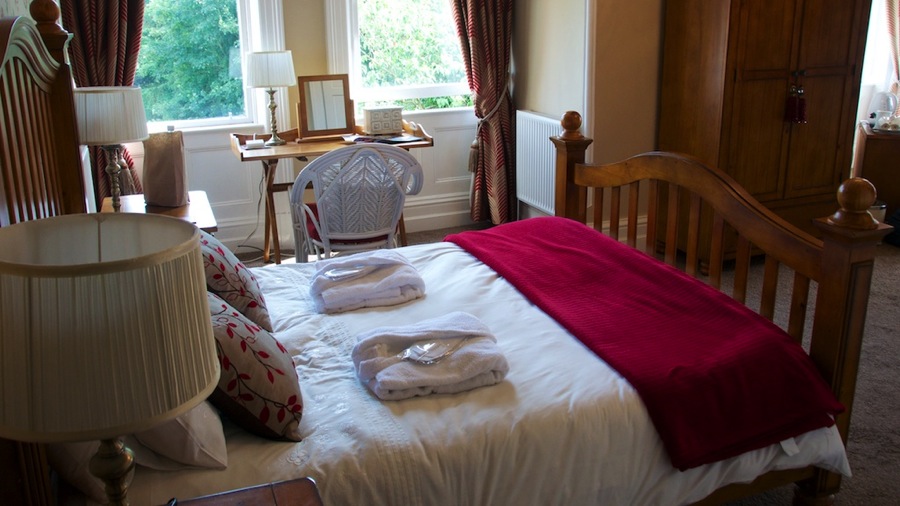 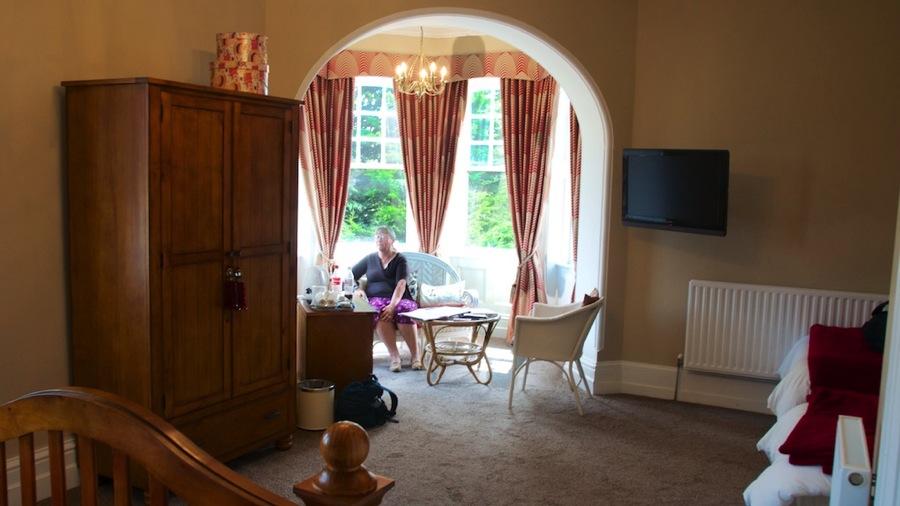 Pretty snazzy indeed. Best internet we’ve had on our trip too…11.94 Mb/sec down and 4.something up…almost as fast as the FIOS we used to have in the sticks and bricks. We had a nap and then I did this post…we’re going to wander down in a bit and have some dinner at the pub across the street. There are other restaurants on the river walk that we’ll check out later in the week…unless the DLETC (Connie’s new title of Dining, Lodging, Entertainment and Transportation Coordinator) changes her mind and we walk down the walk today…ya’ never know.