Glens of Antrim and Travel to Belfast

Another pretty decent day…although we continue to think the Republic got a better deal than Northern Ireland did…but today’s sightseeing was better than we had yesterday and the towns seemed a little less dingy.

After breakfast…we changed from the bacon and eggs we’ve been eating most days and Connie had cereal and yogurt while Neil had pancakes…and I gotta tell you the Irish make better ones than we do back home. They’re thinner and have a lot more chew to them…think tougher and you’ll be about right. After we ate we checked out and headed off. We transited up through Portrush near the Giant’s Causeway and then got to the coast a bit east of there…then followed the Scenic Coast Causeway down the coat about 40 miles or so total until we arrived at Larne. From there we headed inland through Newtownabbey to our hotel in Belfast…the Europa Hotel. We had a bit o’ bother finding it but figgered it out and got checked in fine. As in most big cities…they really gouge you for the parking. Neil parked in a commercial lot nearby and it’s 14 pounds a day which is about $24. Guess they gotta get their pound o’ flesh from you somehows.

Anyway; on the way down the coast road we stopped by a few places that looked interesting…first up was Torr Head. Torr is Irish for tall rock and the head is the closest point between Ireland and Scotland, it’s just 12 miles away from here. The head is 300 feet high maybe and you can see Scotland across the way as well as Fair Head, Rathlin Island and some smaller offshore islands from the top. We got followed by a cop for awhile…turned out it was a couple of young cops who harassed the couple of British ladies in the car behind us. We had previously taken turns following each other up and down the goat tracks hunting for the parking lot for the head and ran into them again when we got to Torr Head. Here are a couple views for you…Connie thinks the head in the first one looks like the Rock of Gibraltar…and she’s sorta right. The last one is looking down at our car, it’s the front one of the two out in the open you can see…and the lady in red is our British friend struggling up the hill. 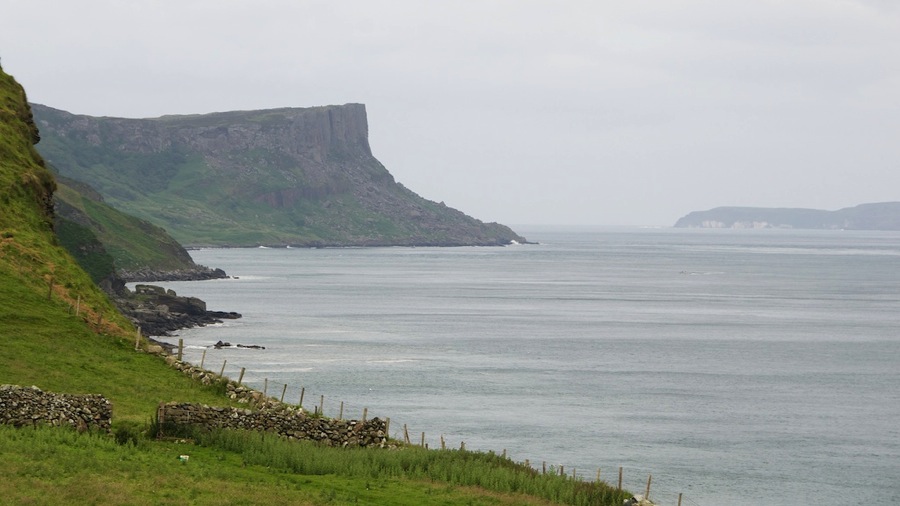 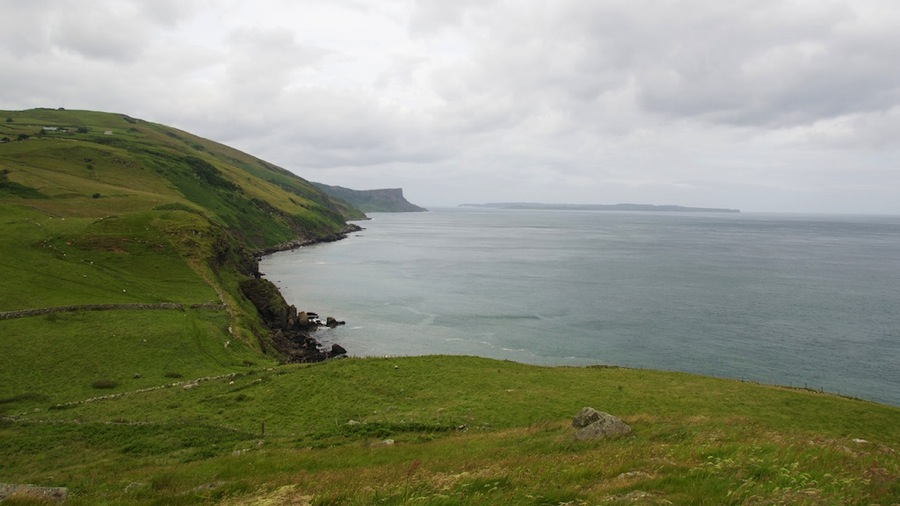 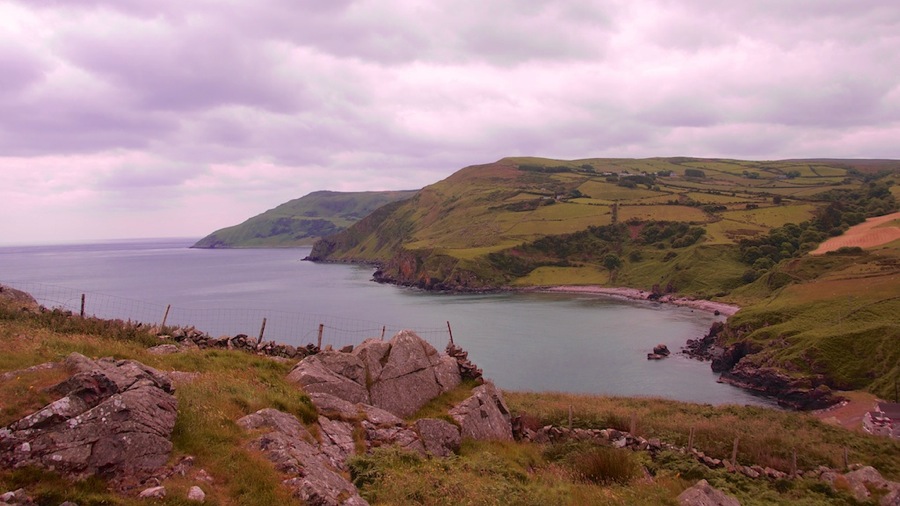 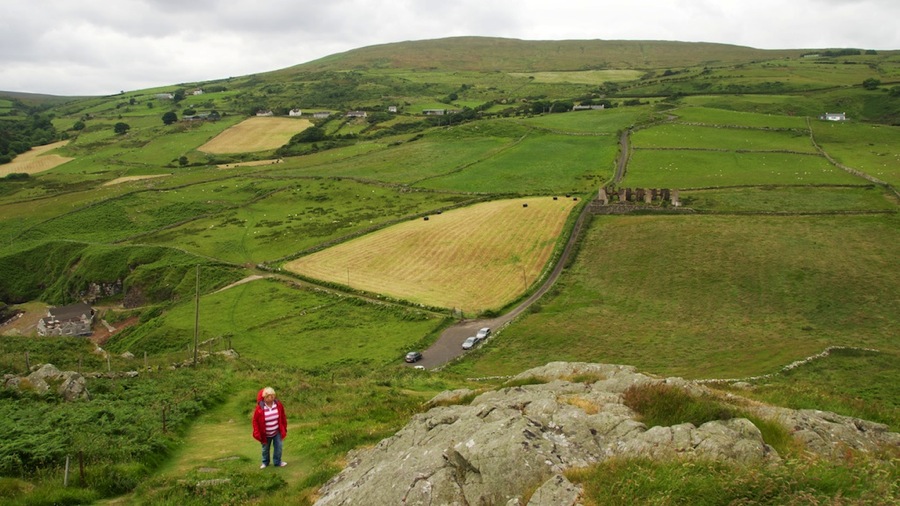 From there we headed for the scenic coast road…and while we were traveling down this road (I shoulda had Neil take a picture of this road with the car sitting on it; it’s literally not wide enough for two cars to pass. Making it worse…a little bit later we were on a road about 1/3 narrower than this one…and this one had a white line dividing it into lanes. Musta been wishful thinking. Neil put the left tires touching the grass on that one and the right tires were past the white line…even a SmartCar wouldn’t have fit. 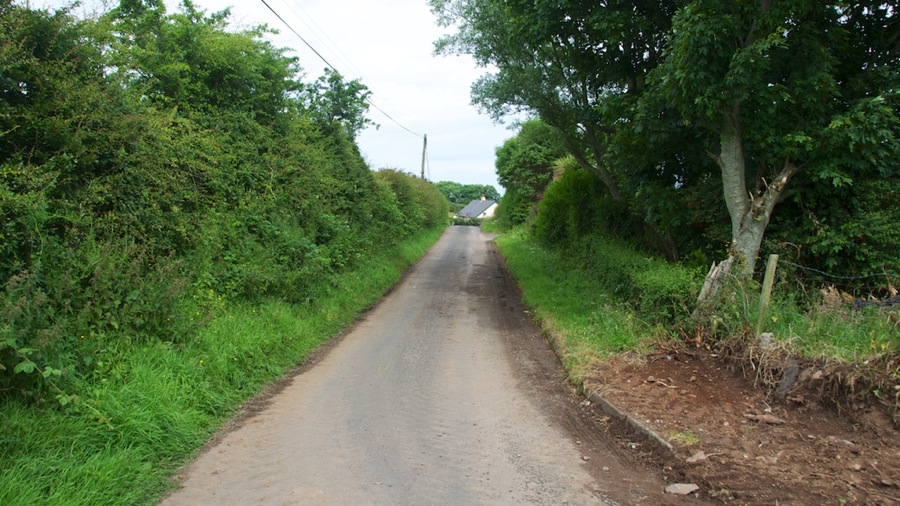 we saw this sight alongside the road…and it actually worked even though it was a pay phone out in the middle of nowhere. We thought pay phones were like Santa Claus and the Easter Bunny. 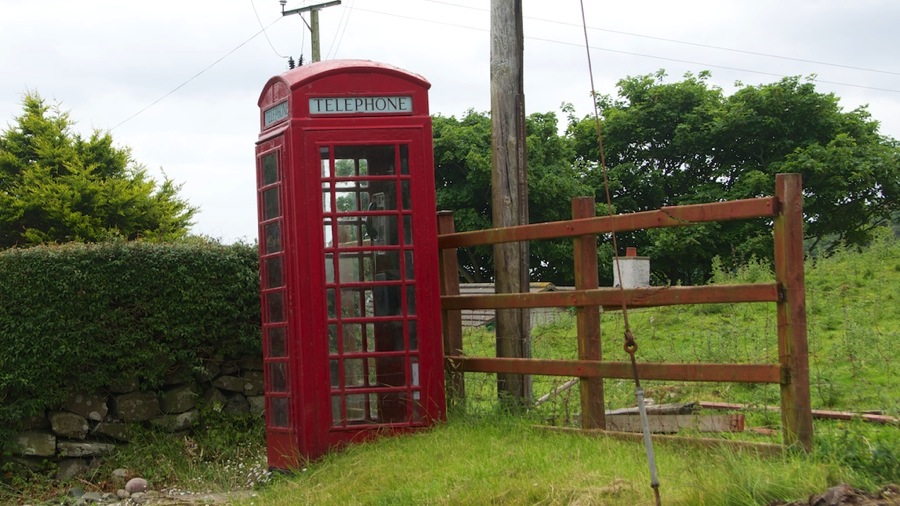 One last pano from just about 50 yards down the road past the phone booth…if the view went another 10 degrees to the left you would be able to see it; those trees at the left are the ones behind and to the right of the phone booth.

While he was taking that pano this sheep got up and looked at him like…”Dude, what are you doing?” 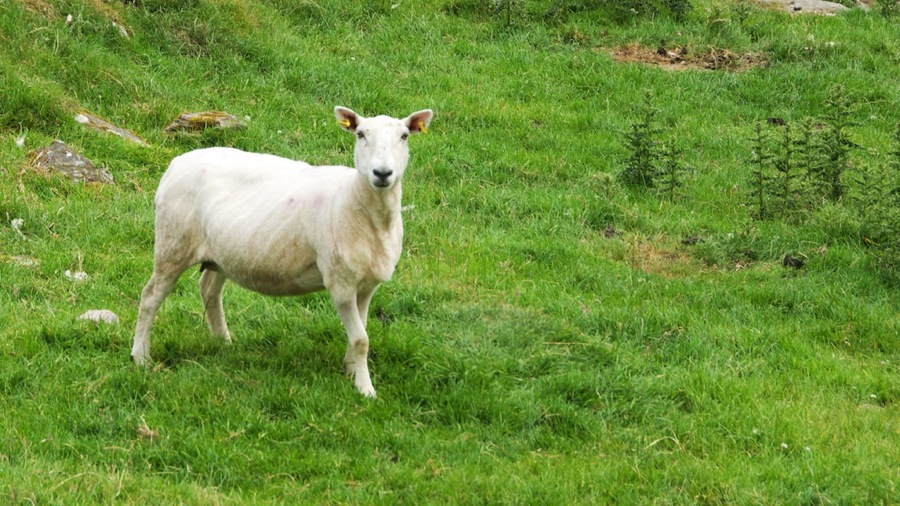 Continuing on down the succession of goat track roads…we finally got to the coast scenic road and there’s good news and bad news about that one. The good news is that it was wider than before. The bad news was that we were driving south down the east coast of Ireland which meant the passenger side was right on the edge of the road. The bad news was that this road had literally been gouged out of the side of the cliff and there were no shoulders. Two lanes that were sorta wide enough for cars to pass but at the outer side of our lane there was a 3 foot high stone wall directly at the edge of the road. No edge of road yellow line, no shoulder, no grass, just lane and then wall. Neil didn’t like that much. On the way we passed this quaint looking church and then once we got to the coast road spotted a tribute to the recently concluded Giro d’Italia bike race which passed this way; you can tell by all the pink bikes you see everywhere. We also stopped in some little town and had lunch and a pint at a place named Harry’s…pretty good grub again. 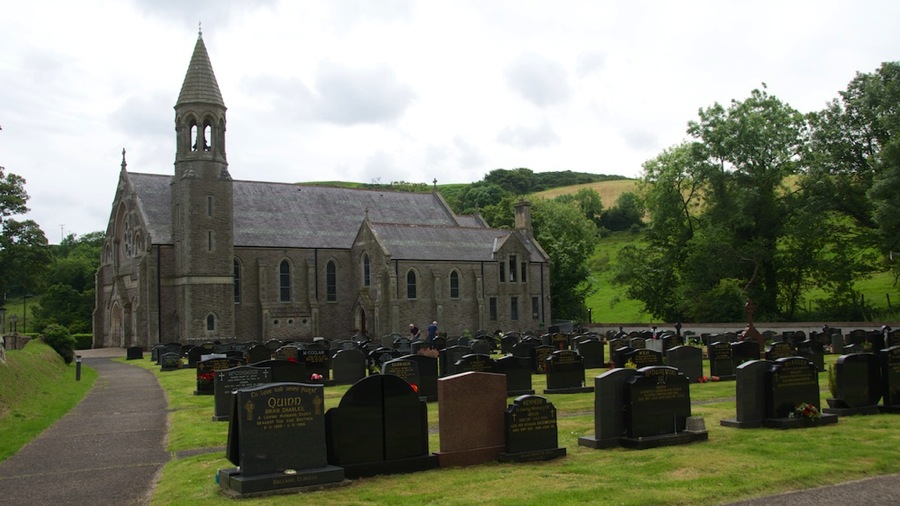 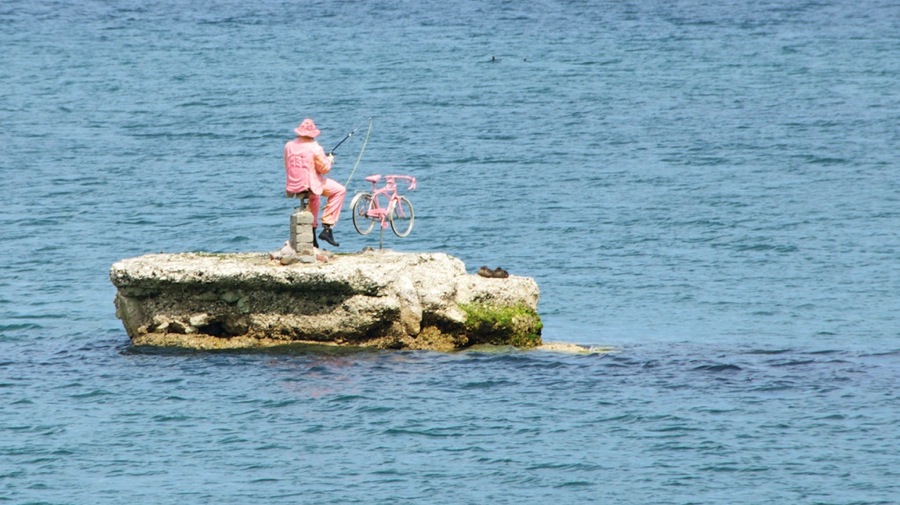 Driving down the coast road the big attraction is our third (again, completing all of them) World Heritage Site here in Ireland…the Glens of Antrim. They’re located in Country Antrim which is on the northeast coast. There is a series of 9 ridges that extend out to the coast in a radial pattern from about 20 miles inland. They’re steep, craggy ridges and in between each of them is a deep narrow valley (or glen as they’re called over here). The 9 valleys in total comprise the World Heritage Site. Here’s a pano looking from one of the headlands back sort of west-northwest…you can see two of the valleys or glens here. The one on the left is more straight on so you’re looking down it’s throat, the one to the right is more of a side view. The tall ridge just left of center separates the two glens.

With that our day was done. We drove on to the hotel and are just going across the street for dinner. Tomorrow we have the hop on/hop off tour and then we’ll have afternoon tea if we get back early enough.

Dinner will be across the street at the Crown Liquor Saloon…Connie has some cool stuff for the blog that I’ll put in if we actually go there and don’t change our mind.

4 Responses to Glens of Antrim and Travel to Belfast