Well…at least one of our hikes was really nice yesterday.

After breakfast we packed up ourselves a picnic lunch and headed out about 15 miles from here to our first hike at the Homesteader Nature Trail in Brandon. This turned out to be a pretty decent hike…we had the park almost all to ourselves the whole time. On arrival we saw a fellow getting out of his car with his dog and heading off on the loop trail. We didn’t see where he went so wandered around a bit before finally finding the trail start…although we ended up taking a different path through the series of loops forming the trail than he did. We ran into him again about 3/4 of the way through heading the other way but he was gone by the time we got back to the parking area. We were alone through our lunch break sitting on the picnic table and another fellow and his dogs showed up right as we were leaving.

The land for this park was donated by the descendants of John Samuelson who originally homesteaded with his wife Anna in 1869 after they emigrated from Sweden. He built this cabin and it was used by his family and the 160 acres farmed by his descendants until 1967 when it was bought by the country and turned into the current park. 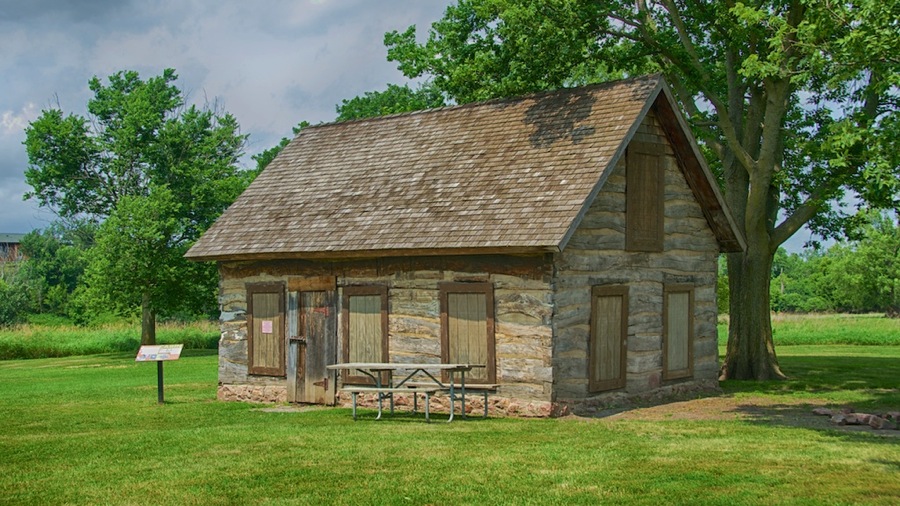 Heading out on the hike we missed the sign for the entrance into the trail and sort of took the back way in. 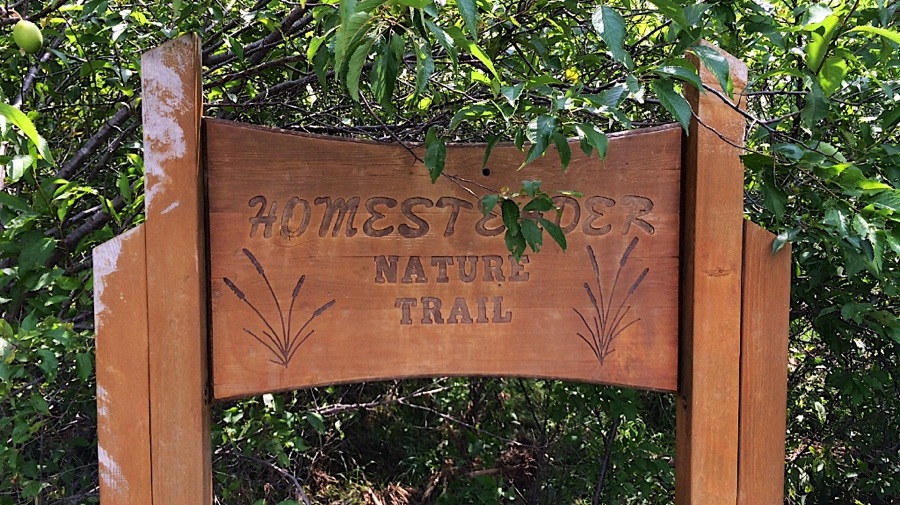 After crossing the creek through the property we got a couple of nice shots of the oxbow bends…the creek probably curved 2 or 3 miles in all as it passed through the 160 acre site (about a quarter of a square mile)…it was quite twisty and we crossed over it several times as we traversed the loop. The trail wasn’t marked and had numerous intersections with other trails…all of which appeared to be maintained so we generally kept our selves in a loop and used our the GPS on our iPhones to figure out which way to turn at each junction. Connie found the trail on her All Trails app…but there was no information at all in either the app or on a sign at the park so we were sort of on our own. 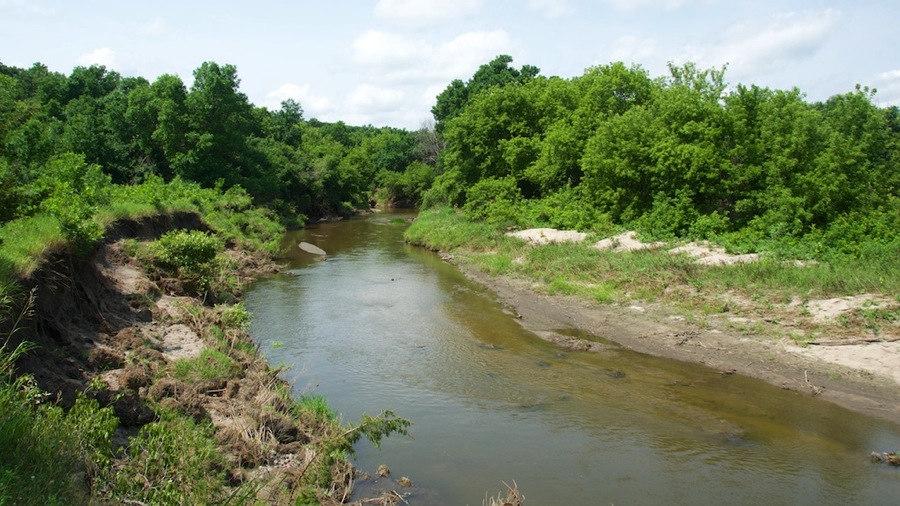 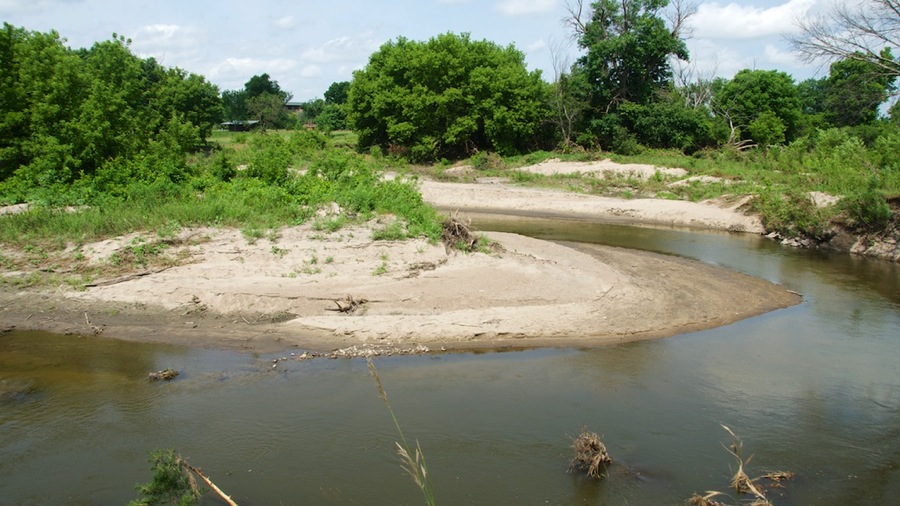 This was a pretty nice little hike about 1.7 miles in total. We had put on bug spray but the critters weren’t actually bad at all and we thoroughly enjoyed it. Didn’t see any wildlife but it was still a nice walk through the woods.

After lunch we headed off to our second hike at the Valley of the Giants Nature Trail…no idea why it is called this as again neither All Trails or the trail signage said anything. This was supposedly a 1.2 mile loop hike out around a bend of the Big Sioux River…which eventually flows through Sioux Falls about 7 or 8 miles to the southwest of the hike location and over the falls there. We paid our 6 buck per vehicle entry fee and got parked…everything seemed normal and we headed out on the hike…everything seemed normal for a couple of hundred yards then we got into the mosquito zone. I tell ya…there wuz thousands of them and it seemed that the bug spray (even though we liberally applied some more) just attracted the little buggers. We pressed on hoping that it was just a localized thing…we’ve found on a lot of hikes that you’ll run into a patch of mosquitos either at a particular elevation or close to a small body of water and that climbing or descending just a few feet as you hike makes them disappear. No such luck on that one today though…we did have a few spots where we had less of them around but by and large it was continuous. We thought this was surprising as it wasn’t really a swampy hike with lots of standing water for them to breed in…the only real water was the Big Sioux River but it was flowing steadily so would not really serve as a breeding ground for them. So we ended up hiking pretty quickly and only stopped for a few photos…what with them buzzing around the camera and your head it made for a pretty lousy walk. Still good exercise but that’s about all you could say for it. 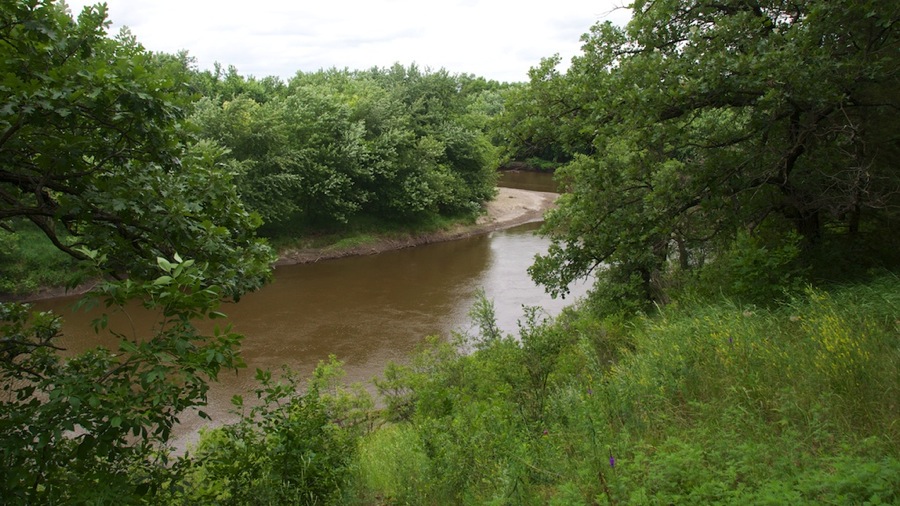 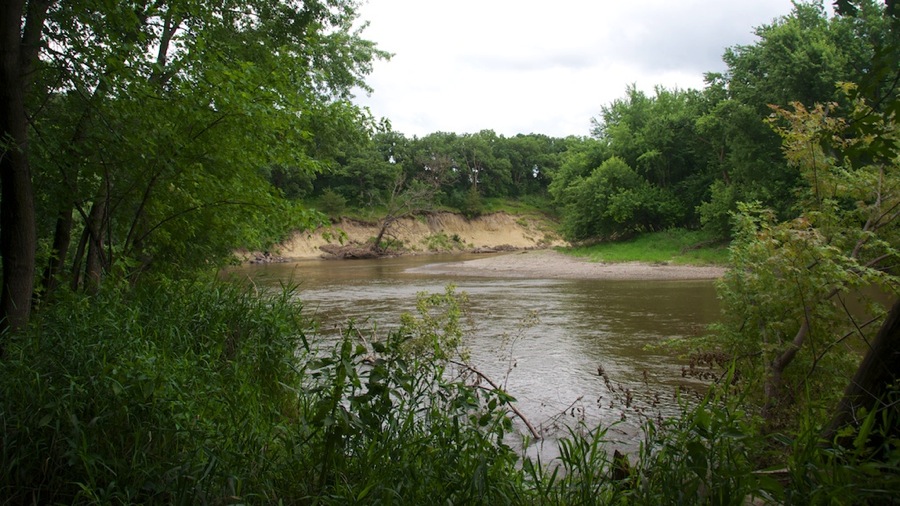 We came home and had burgers and leftover couscous for dinner…then Neil went out and got another shot of a nice sunset over the freeway before calling it a day. 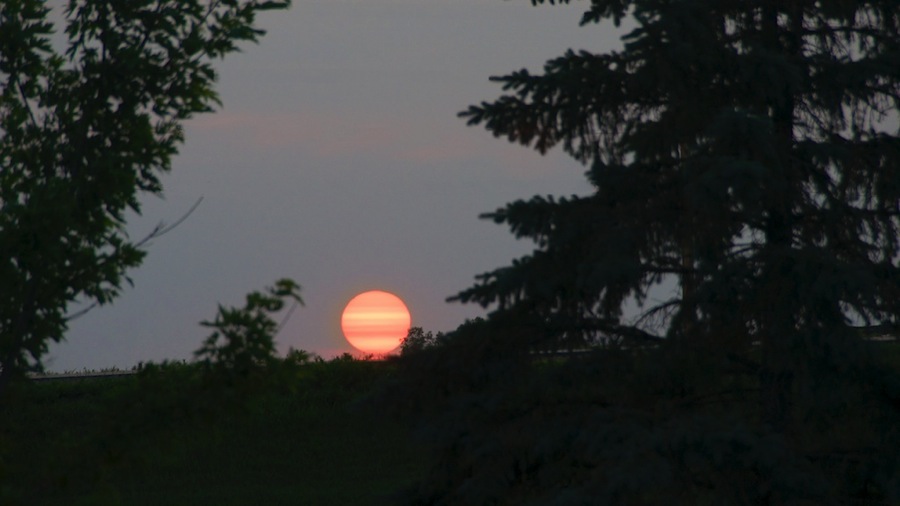 Today we’re headed up to the Jazzfest in Sioux Falls…there are a couple of zydeco and New Orleans style bands playing…and we’ll have some barbecue or a hotdog or whatever while we’re there probably…I’m thinking they’ll likely have beer as well. Tomorrow we’re off to a local winery where they have music and sangria…can’t complain about that either.