I gotta tell you about this book Connie has been reading…it’s all about this area of the country and she has been using it to help figure out places to go and things to do up here in the Michigan Upper. It’s called Sketches of a Tour to the Lake, Of the Character and Customs of the Chippewa Indians, and of Incidents Connected with the Treaty of Fon du Lac. It was written by Thomas L. McKinney of the US Indian Department…who was charged with meeting all of the Indian tribes in the Michigan Territory and negotiating peace with them. His efforts resulted in the first treaty between the US government and the Indian Tribes which was signed at Fon du Lac in 1826. Neil’s forbear (some number of greats–Connie says it’s the Fourth Great Grand Uncle) uncle Thomas Connor was the translator for the exhibition.

The book details Mr. McKinney’s travels from Washington DC up to the Great Lakes area, their journeys through the lakes and the subsequent negotiation of the treaty. She’s gotten some good info for our travels and used it to figure out several Fun Stuff© days including today’s visit over to the Painted Rocks National Lakeshore.

So…did you know that there were cliffs 250 feet tall that resemble the Cliffs of Moher in Ireland on Lake Superior? Did you know there were sand dunes 500 feet high right on the shore of Lake Superior and that they were used for logging back in the old days. Neither did we…although Neil was vaguely aware of the sand dunes at least. Anyway…that area was our destination for today; it’s an area about 40 miles east to west and 20 miles north to south starting about 25 miles west of our current parking spot in Newberry.

We had coffee and breakfast and then headed out. Our first destination was Sable Falls at the far northeast corner of the National Lakeshore. We got there after about an hour and started out on our half mile or so hike down to the falls…there was a 184 step staircase that we had to negotiate down and then back up after our viewing of the falls. The falls were pretty nice an we got several good shots.

Our second stop was at the Grand Sable Lake overlook…which overlooks over the lake from some dunes about 200 feet or so tall…well, it overlooks the lake after you climb the dune at least. Connie elected to stay in the car while Neil hiked up…steep and soft sand so it was hard climbing up. Here are a few shots from the top. Connie is in the car down on the road you can see in the first shot…it’s parked just out of sight behind the dune to the left/ 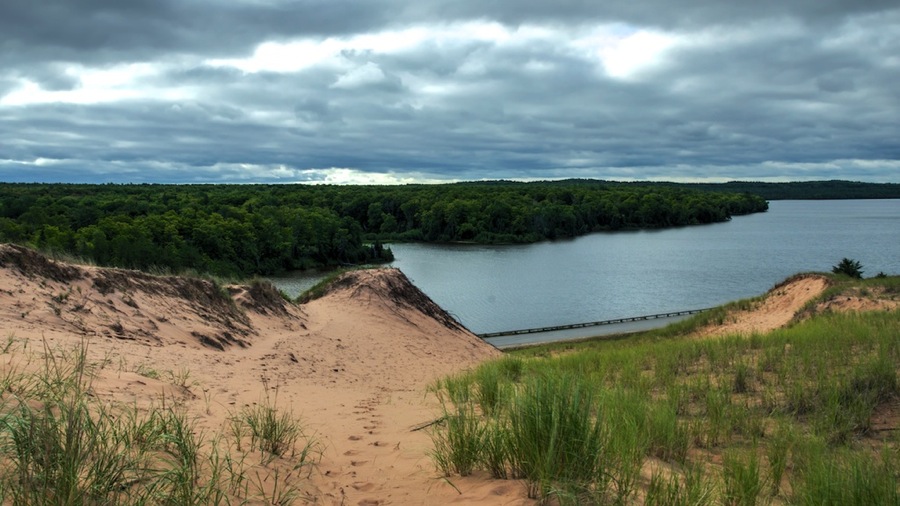 For this shot he turned around 180 degrees from those above and looked out over the dunes toward Lake Superior in the background. Pretty nice views from up there.

After that we headed another 10 miles or so west to the Grand Sable Dunes area of the park…this area features dunes that are right on the edge of the lake and about 500 feet high…we hiked up to the edge of an area known as the Log Slide…this was used back in the late 1800s and early 1900s to slide logs down into the lake and thence to sawmills to be turned into lumber. The sign at the top of the Log Slide said that it would take you 5 minutes to hike down from the crest to the shoreline and probably over an hour to climb back up as it’s about a 45 degree angle and is very soft sand.  Here’s a shot from the top of the Log Slide…then we hiked a quarter mile or so to the left (southwest) and got a shot of the dunes from the side…the Log Slide is visible just above the tree branches in the second shot.

From there we headed over to Hurricane River in hopes we could see the Au Sable Lighthouse…but alas it was not visible around the point and time constraints prevented us from taking the 2.5 mile round trip hike over to see it. We did get a couple of shots of where the Hurricane River empties into the lake…these two shots are 180 degrees opposite from each other without actually moving. We also spotted this chipmunk along the way; our only wildlife sighting for the day except for a hawk that we could not identify. Neil thinks it was a Swainson’s hawk based on the coloration from the admittedly poor photo we got but Peterson’s says the Swainson’s is a western plains species so we’ll just leave it as unidentified for now. Ospreys are common here but the coloration was wrong for that species. 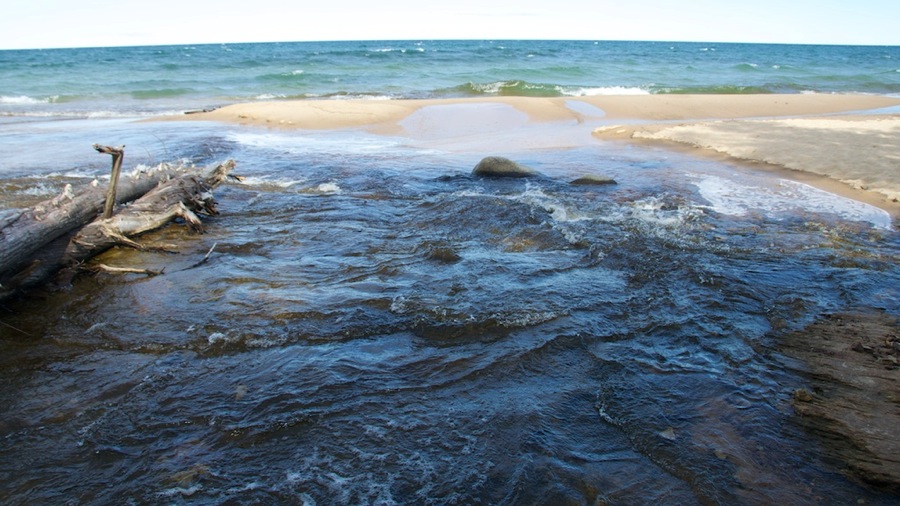 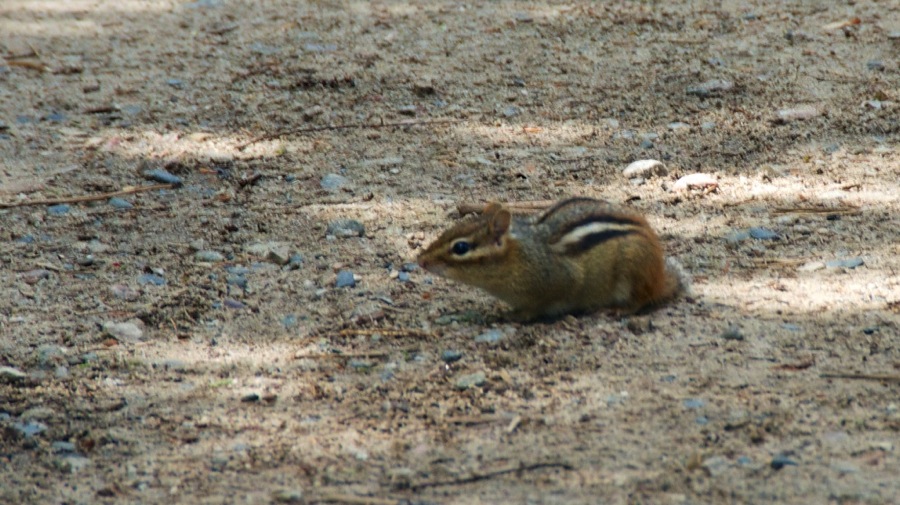 Our next stop was the Chapel Falls which required about a 3 mile round trip hike to get to…but it was worth it even though we were ready to be back to the car by the time we returned to the parking lot. The first shot shows the lower portion which is about 60 feet tall, the second the upper portion which is maybe 10 or 15.

From there we headed on to the Miner’s Castle area…where you can see the most famous individual feature of the Pictured Rocks…and after hiking another half mile or so round trip we also got the lower overlook which included a closeup of the Miner’s Castle itself as well as a shot of the Pictured Rocks escarpment…most of the best views of the Rocks are only visible via boat and we didn’t have the time to spare for a 3 hour boat ride in the middle of our long, long day. 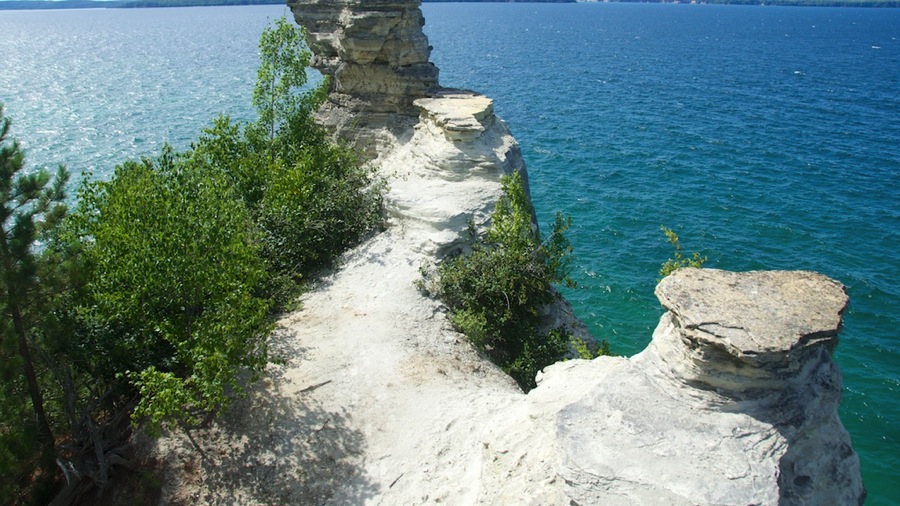 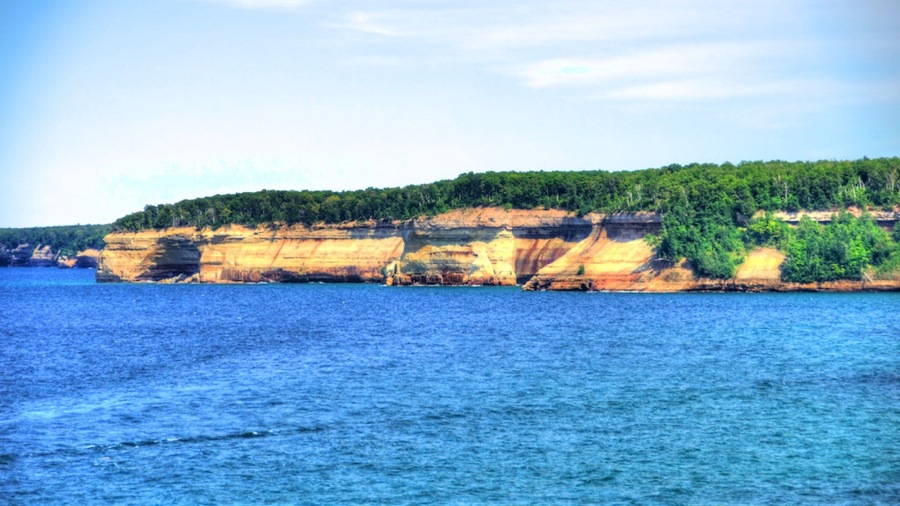 From there we headed off to our last destination for the day…Munising Falls and Sand Point to see if we could find the famous East Channel Lighthouse over on nearby Grand Island. As we headed up towards the falls we didn’t think it would be very good as the river it was on was more of a small stream…but it turned out to be an 80 feet or so tall fall with a large single drop and then a flow down a rock face towards the bottom. Much better than we thought it would be. We did find East Channel Lighthouse…but couldn’t figure out why it was supposed to be famous as it’s a relatively nondescript house with a steeple attached for the light.

With that our day was done. We hopped back in the car and pressed Home James on the GPS and an hour later arrived at the Newberry Elks Lodge where we had a pitcher of Amber Bock and a couple plates of soft tacos since it aaas Taco Tuesday after all. After that it was home for showers and rest in the recliners until bedtime.

The full time RV travels and experiences of Gunther the Bear and Kara the Dog…along with their human staff neil and Connie.
View all posts by Gunther →
This entry was posted in Organ Symphony, RV. Bookmark the permalink.