Well; Neil’s cold has continued to bother him this week…lots of sniffling, aches, tired and just feeling overall lousy. Despite that…we still did what we needed to do; finished wrapping presents, attended the special version of Midnight Mass at 4PM on Christmas Eve and then again on Christmas morning as the choir sang at both of those, went to the Christmas potluck here at the park and just tired to rest in between.

I did want to catch up a few photos from the past couple of weeks and post some more Alex images to our smug mug page though.

A couple days before we headed up to see Alex we went over to the Pine Island Wildlife Refuge for a hike…it wasn’t much of a hike as the water was still too high to get to most of the loop trail so we’ll have to try again in a month or so. We did spot a hawk way away across the marsh…but this was as close to it as we could get. Looks like a Red Shouldered but it’s hard to be sure and we forgot the binoculars in the car.

Sunday afternoon before we went up to see Alex the park put on a boat tour up to Punta Gorda to see the lights along the canals…we passed one house that is 16,000 square feet with only a couple living in it…talk about having too much place. Here’s a couple shots from the ride.

Finally; a few more shots of baby Alex; I’ve uploaded a whole bunch more than this to our photo site on smug mug at http://laubenthal.smugmug.com/Grandkid/Neil30/ but here a few of what we thought were the better ones.

First one is right after he was born…the hospital photographer took this one.

Betty, meet Alex. After he was off the glow worm light and more awake he watches their beagle Betty a lot. 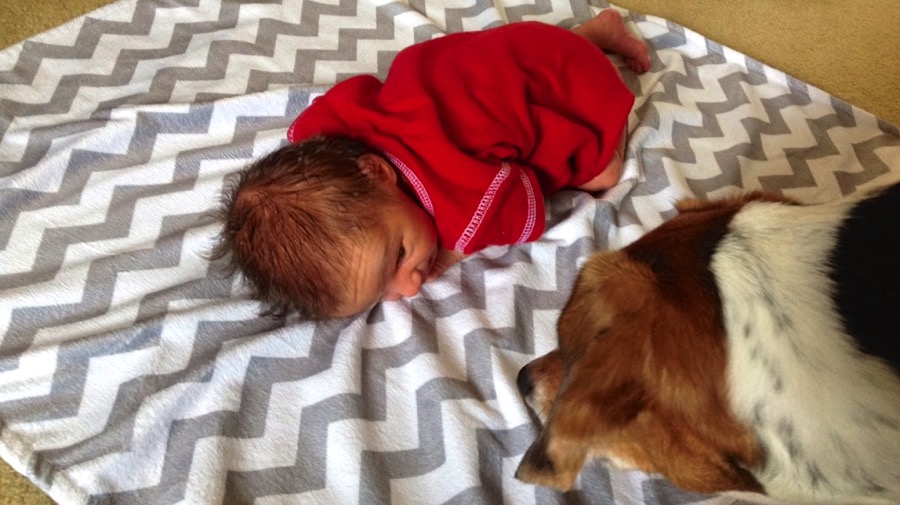 On mom’s bed in the hospital.

And a shot of him dressed up for the holidays.

I think this is the best shot of him so far…awake, dressed for the holidays, and sitting on mom’s lap. He’s a cute lil’ guy all right. Like the Stongbow Apple Cider commercial with the slow motion horse says…this is the best-est.

Neil went out this AM and regenerated our water softener. It lasts about 6 weeks or so and gets rid of all the minerals in the water down here that make the water hard. To regenerate it you dump in 2 boxes of regular old table salt and then slowly flush it with water for a half hour. This removes the minerals from the resin particles in it and we’re good for another 6 weeks or so. Soft water makes your soap work a lot better and also helps keep the grease/mineral gunk off the sides of the gray water tank which helps keep the tank level indicators working correctly.

He’s also been doing a lot of our maintenance items the past few weeks…he’s about 1/3 the way done with the list and has another list of stuff we need to buy before heading off for our Alaska trip in the summer. We’re going to leave the car with the human kids while we’re gone and also leave a lot of stuff we know we won’t use like our kayak and Christmas decorations in the storage unit…no need to haul all that stuff we aren’t going to use with us. We’ll carry some stuff in the back seat of BAT but will put it in bins so that we can easily toss it in the bed or under the front of the rig when we need the back seat for carrying friends…a lot of the sights you have to drive to from the campgrounds and we’ll split the driving duties with our friends Bill and Linda as well as all of our other friends that we haven’t met yet who will be on the caravan with us.