We didn’t do much so far this week as we spent the first couple of days resting from all the rally activities last week. We did head off to Bingo at the Elks on Tuesday and Neil paid his dues for the next year…they’re not due until April 1 but the secretary is collecting them and processing them as she goes rather than leave a big pile for the end.

The weather this week has been pretty windy and only in the upper 60s to low 70s all week with lows in the 40’s and tonight it’s getting down to the mid 30s. I don’t know who ordered the arctic blast down here to Florida…but it needs to go away. Granted…it ain’t as bad as it is a little farther north…pretty much anything north of say Jacksonville is frozen into a bit sheet of ice and snow.

Today we went down to the clubhouse at 1000 for donuts and coffee…and are meeting up there at noon for a rum distillery tour combined with lunch. After that we’ll have leftover venison from what Neil grilled Monday night then Connie will have to bundle up like Nanook of the North to go down to Bingo. I’ll post some pictures of the rum tour later.

Neil also got some new software this week…he’s been using an application from Apple named Aperture to process his photographs…it was their professional level editing and management program. It competed with the other big kid on the block…Adobe Lightroom from the same folks that publish Photoshop. Aperture has been getting further and further behind in Lightroom in features (we’re still at version 3 after almost 3 years while Lightroom went from 3 to 4 to 5 and now up to 5.7) and a few months back Apple announced end of life and support for Aperture…in favor of a brand new application to be named Photos. We were guardedly hopeful that it would be a decent replacement…but the beta version is out and it’s been really dumbed down with almost none of the features that serious shooters want. The new app integrates really well with the iOS versions that run on iPhones and iPads…but the advanced amateur/professional market isn’t that significant numbers wise and Apple made a business decision to aim the new product at the Facebook/Instagram/Twitter crowd rather than people that really wanted to have good photos.

So…this week we bit the bullet and went for the Adobe Photographer’s bundle which combines Lightroom and the latest version of Photoshop (we are about 3 or 4 version back there as well) for 9.99 a month. We’re going to keep Aperture around for working with our older already processed photos but will do all new ones in Lightroom…with a decision to be made later on whether to import all the old stuff or not.

All this of course…means a whole new learning curve to perfect a workflow for going from raw photos out of the camera to finished output ready for the blog…nothing hard about any of that but Neil has an awful lot of muscle memory and memorized key equivalents to rapidly select tools and such that he’ll have to reproduce.

In our last post I put up a photo of a Snowy Egret with partially grown in breeding plumage…and happened to come across this shot on Ugly Hedgehog (a photo forum Neil frequents) that shows what breeding plumage looks like when it’s fully grown in. It’s a Great Egret instead of a Snowy…but the plumage is pretty similar for both. He borrowed this photo from there and credit goes to the original photographer whose name he didn’t get and he couldn’t find it again to get the name…apologies to the original owner. It’s a beautiful sight…isn’t it…and one can easily see why hundreds of thousands of these birds were killed back in the 1800s and early 1900s to provide decoration for ladies hats.

He’s also been testing out some new settings on his camera to improve the ability to get tack sharp focus on bird photos…mostly a matter of adjusting how the auto focus mechanism works and getting the new steps impressed on his muscle memory again. Here’s a shot of an immature anhinga that was swimming over at the beach the other day about 30 yards away.

Here’s a shot of the same bird as he flew towards this feeding spot…Neil deliberately slowed this one down and panned the camera to get a sense of motion in it.

Here’s his first test edit using Lightroom instead of Aperture…it’s two different edits of the same photo. The first one was previously published and was processed with Aperture; the second one is from Lightroom. The third one is just posted as a test at a 900 pixel wide dimension to see how it looks. I think the Lightroom processed one is better than the Aperture one is…

After coffee and donuts we headed off to the local rum distillery…Wicked Dolphin Rum. They use sugar and molasses from Florida; all their ingredients are grown out by Lake Okeechobee. The distillery itself is pretty small…as is it’s annual output and barrel storage areas. They’re not trying for mass production but make the rum in 500 gallon batches of mash so they end up with about 180 or so gallons of 180 proof of rum per week. Everything is aged in once used bourbon barrels and most of their output is sold after aging one year as white rum…although it’s actually got a little brownish tinge to it. They’re aging some for 3 years that will be sold as dark rum but the first production batches of that won’t be ready for another 3 or 4 months.

The distillery itself…this is about 2/3 of the floor area of the entire distillery end of the operation. Behind the camera is the ingredient storage area and to the right is the bottling line. 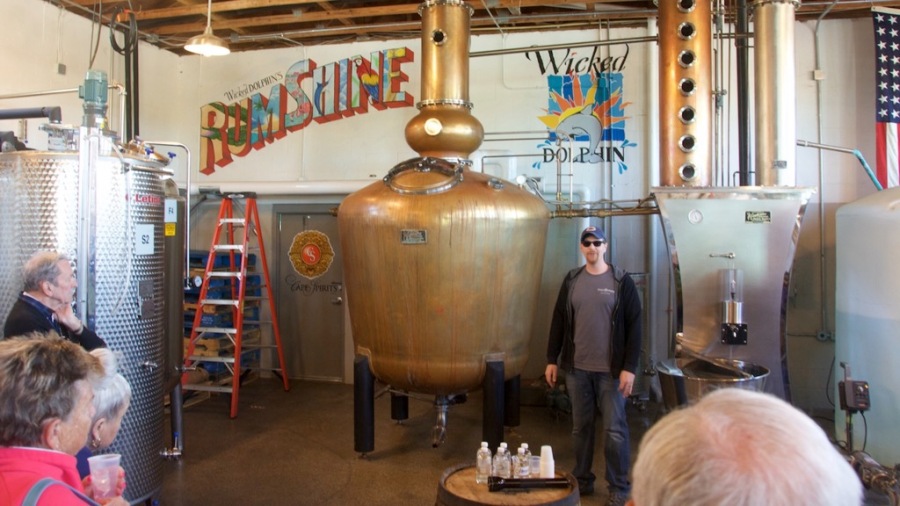 Our guide Chris in the barrel storage room where we tasted some rum that was aged in once used bourbon barrels that were reused for whiskey then reused again for the rum. Pretty tasty stuff.

Once in the tasting room proper…the emcee took our picture for their Facebook page so we took her picture for our blog:-)

We came home with what they call their Rumshine…it’s packaged in mason jars like Moonshine would be and we got some that is flavored with blueberries.

We had lunch on the way home from the tour…stopped at Bubbas on the bus (well, a class A RV used for a bus by the park)…the distillery gave us coupons for a free Wicked Dolphin drink but all the restaurant would honor it for was this punch concoction that had no flavor at all and practically no rum. We also had pretty lousy food…Bubba’s has gone down considerably in quality since we ate there a couple years back so we won’t be going back again.

Lunch wasn’t over until 1530 and the bus driver broke just about every traffic law on the books either on the way there or the way back…so we skipped dinner and just had a snack then Connie headed off to Bingo. She got home about 2030 and by that time it was down to about 40 degrees…and she couldn’t get the door open. She was stuck outside and Neil was inside taking the door apart trying to figure out how to get her in. After an hour or so of tinkering she had to go back into the employee section of the park to hunt up Gordon the RV tech…her favorite thing to do. He was down at the office so then she had to drive down there and eventually about 2200 we got Gordon here and after crawling in the emergency escape window he got the door open. The latching mechanism is broke…which is what Neil suspected…and Gordon has parts on order to fix it. Connie was really unhappy about it…cold and having to make phone calls and bang on doors to find Gordon’s RV back in the employee area.

Friday Neil got the emergency window correctly reinstalled with her help then after she worked awhile we headed off to Sarasota for a concert. We got stuck in traffic that we weren’t expecting and got to our restaurant reservation about 30 minutes late…but we had called ahead and let them know so they held our table. After a great dinner at Duval’s Fresh. Local. Seafood.…served up by our waiter Misha who was excellent, gave us great advice on the various menu selections, and went above and beyond to not only fix us up a box for Connie’s leftover Lobsta Mac’n’Cheese but also fixed us up with ice so it would keep in the cooler until we got home…we headed off to the concert hall. We had a single Jameson (that was actually about a quadruple shot) that we shared in the lobby beforehand while talking to the bassoonist who was out for show and tell…then had a great concert of Beethoven’s Fourth Symphony followed by Berlioz Symphonie Fantastique. After that we picked up bottle of water for the drive home and got home and to bed a little after midnight. Great dinner, great concert…but a little far for our taste for a post concert drive home.

Over the week we got a few more pictures of the little guy Alex…here’s a few but more are on our site at http://laubenthal.smugmug.com…the little guy is really starting to get some personality. 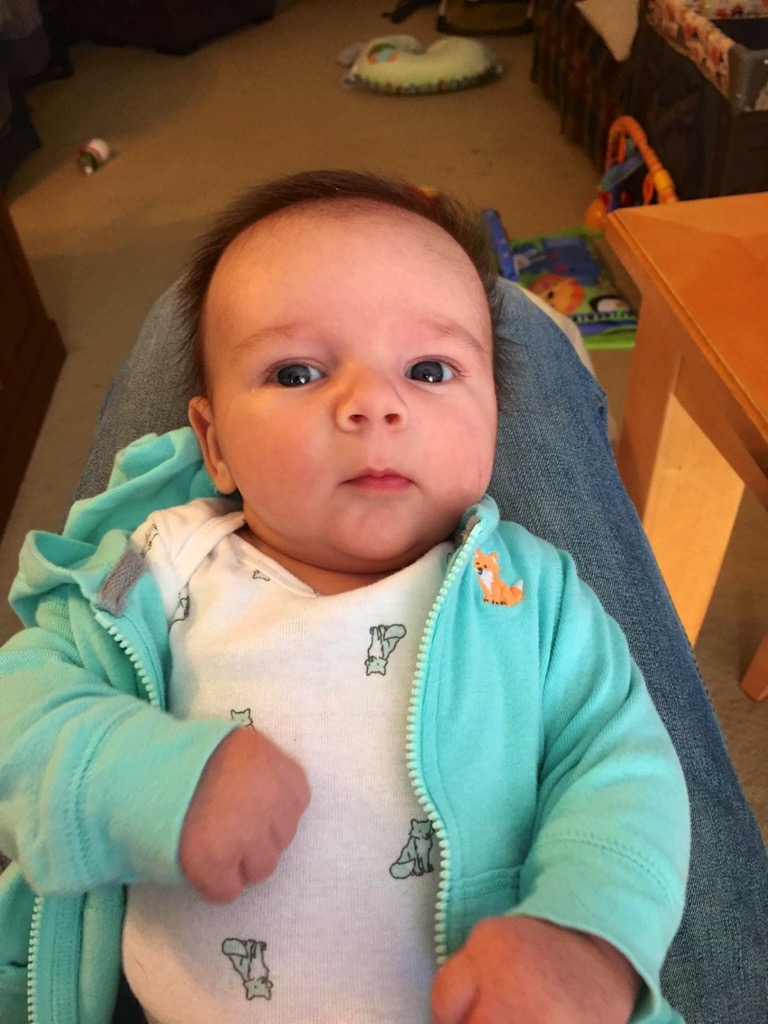 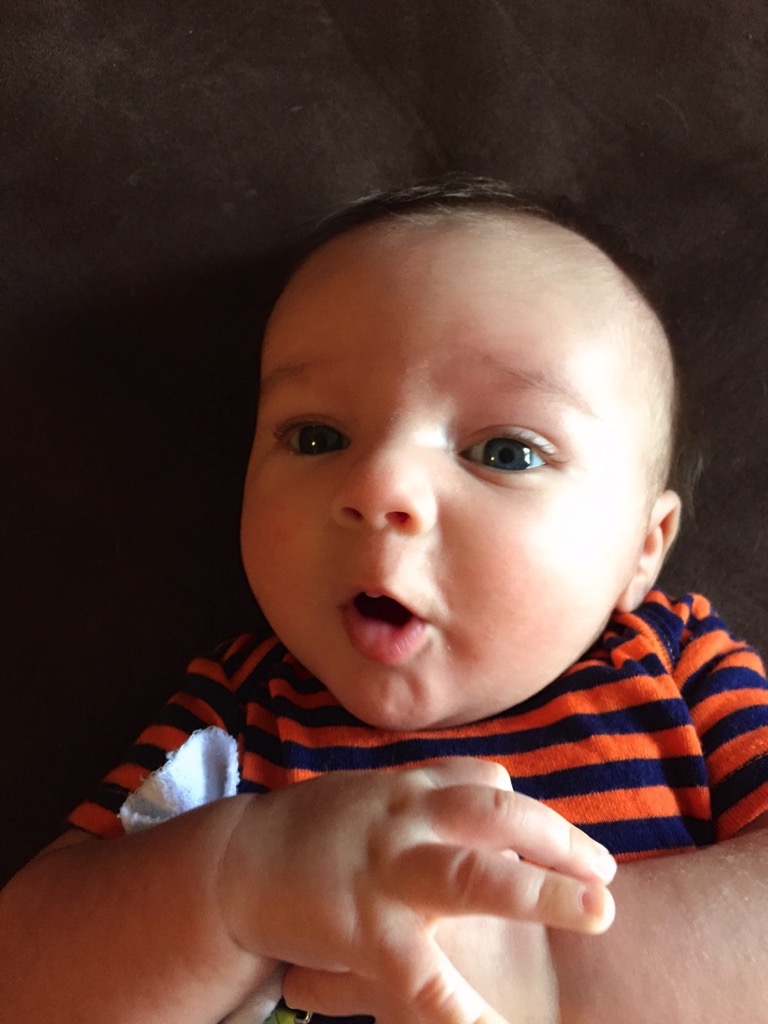 Finally…a funny one for ya. 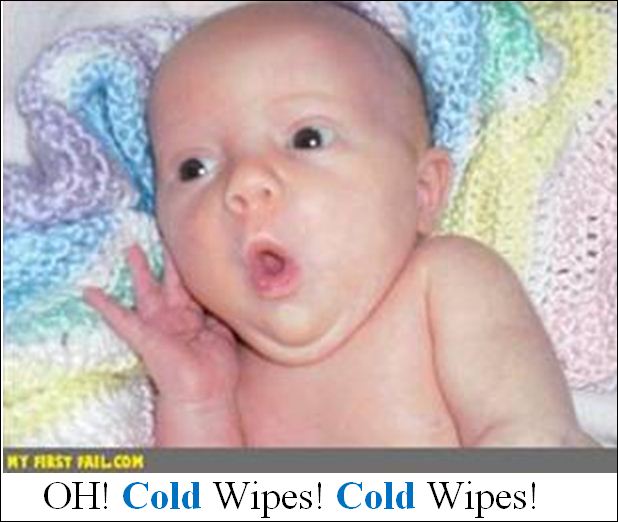