Made it to Canadia

I know that some un-edumacated folks call it Canada…but let’s be real about this…the people from here are Canadians, not Canadans…so clearly people named Canadians gotta be from Canadia…right? That’s my story…and I’ma stickin’ to it I tell ya.

Anyhoo…Wednesday AM we got up and had coffee…skipped breakfast as we were stopping down the road a bit at the Flying J and were planning breakfast there. Packed, hitched, dumped tanks at the dump station and hit the road on I-94 west.

First stop was the Flying J a mile before entering Montana…we filled up with about 15 gallons of diesel but the real reason we stopped in was for DEF…our tank is down about a gallon or so and Neil poured our 2.5 gallon jug into the tank a couple weeks back so we needed to refill that for emergency supplies. BAT don’t run without DEF (diesel exhaust fluid), it gets injected into the exhaust for emission control stuff. It’s made out of synthetic urea and smells like pee…but it converts various unhealthy nitrous oxide type compounds into less unhealthy nitrous oxide compounds. Anyway…BAT will quit running without it and the onboard tank is good for about 4,000 miles so we carry a jug that will half fill the tank and fill up whenever it’s available. DEF is available in jugs of course…but the best way to get it is at truck stops…there’s a little midget gas pump handle alongside the diesel fill handle and you just pump it into a small fill opening in the fuel fill flap area.

The first pump we pulled into had a broken DEF dispenser…but Neil didn’t notice it until he had started pumping so he had to finish, drive around and get back in line for another pump…by the time he was done it was going on 1020 and we were really hungry. We got a couple of outstanding cheese danish from the pastry counter…by the time we were finished we made the decision to just skip lunch and proceed direct to dinner.

We crossed into Montana and turned north on MT-16…the truck GPS wanted to send us this way that was 20 miles shorter but had 15 miles of gravel/dirt road…we changed the suggested route so we could stay on paved roads with higher speed capability. We don’t mind gravel roads and we’ll see plenty of them in Alaska…but time-wise it was clearly quicker to take the 20 mile longer paved highway. We got to the border late morning…of the 20 or so vehicles we observed while we were there we were the only non truck. We pulled up and answered the typical border guard questions…tobacco, alcohol, guns, Mace…then they asked us about chicken and eggs. Due to the avian flu in some states the Canadian government (there’s that word with the i in it again…told ya’) doesn’t allow eggs or chicken from certain states to enter. Luckily all of ours passed muster…the chicken we bought before leaving FL at Costco so it was probably packed in Georgia and the eggs we picked up in Minneapolis. We were in and out of the border station in probably 15 minutes…woulda been faster except we had to bump out the kitchen slide to get to the freezer.

We continued on up the road a total of 320 miles to Regina SK and pulled into the Kings Acres RV Park…where we quickly checked in, paid and got parked in site D14, a nice 30 amp water/electric back in site. That’s plenty of power since we don’t need any A/C units, we didn’t bother hooking up water as we still had 42 gallons from our boondocking earlier, and weren’t going to dump anyway.

Neil didn’t feel like cooking so we unhitched after putting just the front jacks down and headed over to a pub Connie found…Rock Creek Tap and Restaurant. We had a couple pints of amber ale from Maple Brewery out in Vancouver…and split some potstickers and a T-Rex (meats plus caramelized onions) that was house made on whole wheat flatbread…mighty good. Here are shots of our site D14 and our brews with Kara.

And as promised…here are a couple of shots of the Little Missouri Saloon in Medora…we really liked both the beer and the food as well as the great bartender…and any place with those swinging doors and saloon in the name has gotta be good, right?

We also passed this little town on the road just after crossing the border…great name huh? Unfortunately we didn’t see either the deer or the antelope and they definitely weren’t playing. Sorry about the lousy photo but Connie grabbed it out the window with her iPhone…we were on a 4 lane road with the inner lanes blocked off for construction for 15 miles or so…and nary a sight of any construction guys working on it…just cones and barriers. 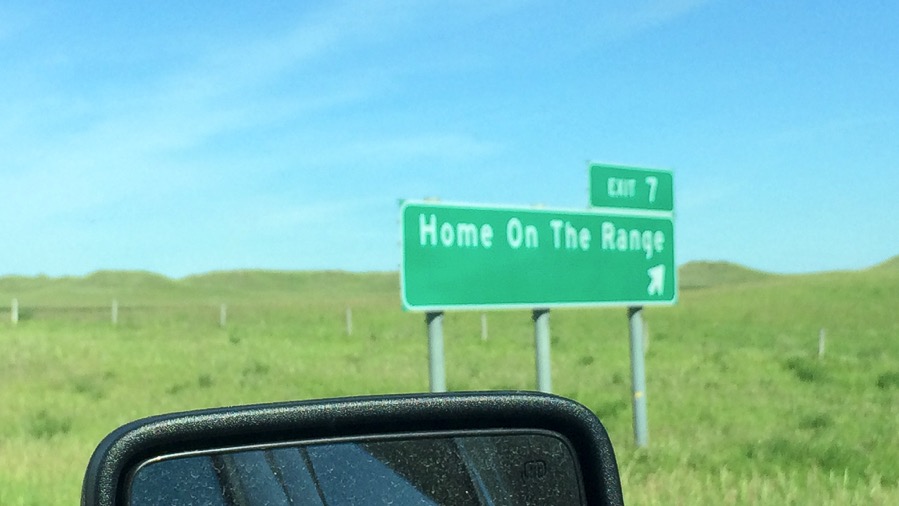 We had a serious time issue in the evening though…in ND we were in Mountain Time and it was Daylight Savings Time. Saskatoon runs on Central Time…but (and this is what confused us as we were unaware of it) doesn’t observe DST. So…on crossing the border we dutifully set our watches ahead an hour as we thought it was Central Time now. Later in the evening we wondered why the sun was still out and after a bit of research found out the Standard Time thing…MDT and CST are actually the same number. When we transit into AB on Sunday we’re back in MDT (Alberta and British Columbia do observe Daylight Savings, go figure)…so we won’t change zones again until we get into Pacific and then Alaska time 12 or so days into the caravan.

This morning we got up about 0700…which turned out to be 0600 due to the aforementioned time error…Connie found it out about 2200 after Neil had gone to bed and we had already set our alarms. After coffee and Eggo waffles for breakfast we hitched up and hit the road. 170something miles later we arrived in Langham SK northwest of Saskatoon about 10 miles and quickly pulled into Site 11 at River Valley RV…another nice 30 amp full hookup pull through site. They don’t take credit cards but luckily take US cash at the current exchange rage so we paid our $99 CN bill for 3 nights with $82 US. Here’s a shot of our site…this is actually a pretty nice little park as well. 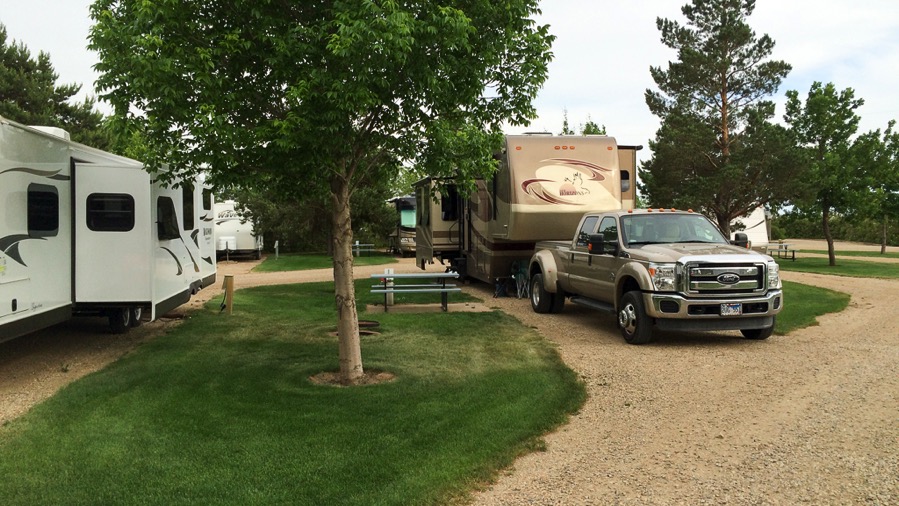 We’re about 200 yards off of the highway heading to Edmonton via Lloydminster…which are our next two destinations after meeting up with Bill and Linda on Saturday and heading out on Sunday.

The afternoon was consumed by setup and washing the rear windows on the house…they were pretty filthy and we couldn’t enjoy the view at all…all better now. Dinner tonight was leftover BBQ’d pork country ribs chopped up and mixed with noodles and some Asian spices. Quite tasty and easy to boot.

It’s TV now until bedtime…for some reason we’ve lost access to all of the networks (ABC, NBC, Fox, and CBS) but most of the rest of them are working fine. We’ll have to chat with Bill about that when we see him…he’s a TV guy and will know if there’s something up with our DirectTV or if that’s just the way it is north of the border. Connie has Fun Stuff™ planned for tomorrow and maybe Saturday AM depending on whether it rains as scheduled or not.