Days 7 and 8 were spent in Whitehorse YT…with many preplanned activities for Sunday day 7 and a free day on Monday when we did laundry, got some groceries and ran errands.

Sunday we got up, had coffee and breakfast and headed off to St. Paul’s Cathedral for Mass…following that we came home and just hung around the house until lunchtime…then headed out for our scheduled activities for the day.

First up was the Whitehorse Visitor Center…where we snagged some free wifi to check mail and podcasts as well as watching their movie about the Yukon in general. Then we headed over to the Whitehorse Rapids Fish Ladder…which probably leads you to wonder just what a fish ladder is…so I’ll tell ya’.

When the Whitehorse dam was built it naturally disturbed the salmon migration back to their home stream for spawning…the dam raised the level of the river about 60 feet which meant essentially no more salmon could get upstream. To get around this problem you build a fish ladder. Downstream of the dam you build a weir (essentially an underwater wall) that produces an artificial waterfall that the salmon can’t leap over. The design of the weir is such that fish get pushed to the sides of the river and run into the current coming down out of the fish ladder. The ladder itself is essential a raised wooden canal that runs up the bank of the river with a gradual rise until dumping back into the lake above the dam. Salmon sense the current coming out of the fish ladder and instinctively follow it as they think it’s the river itself. The channel is not continuous but has a wall across it every 10 feet or so with a small hole on the bottom of the wall…the holes in consecutive walls alternate sides. The hole creates eddies in each little box to allow fish to rest and then then just proceed through the series of holes gradually rising until they swim out into the lake upstream of the dam. The ladder itself is about 6 feet wide and probably 5 feet deep and runs for most of a mile around the dam.

The folks that run the ladder also run a salmon hatchery that hatches about 150,000 fry (baby salmon) a year…these are carried upstream and dumped into streams that they then remember as their home stream for returning when the time comes for them to spawn. The hatchery salmon get the small top adipose fin (the little one just in front of and above the tail) removed and a computer readable bar code pin inserted into their nostril area for later identification as hatchery vice wild salmon.

We got some nice photos of the fish ladder area.

The Visitor Information Center and Fish Ladder signs…along with a memorial at the visitor center to Yukon guides. 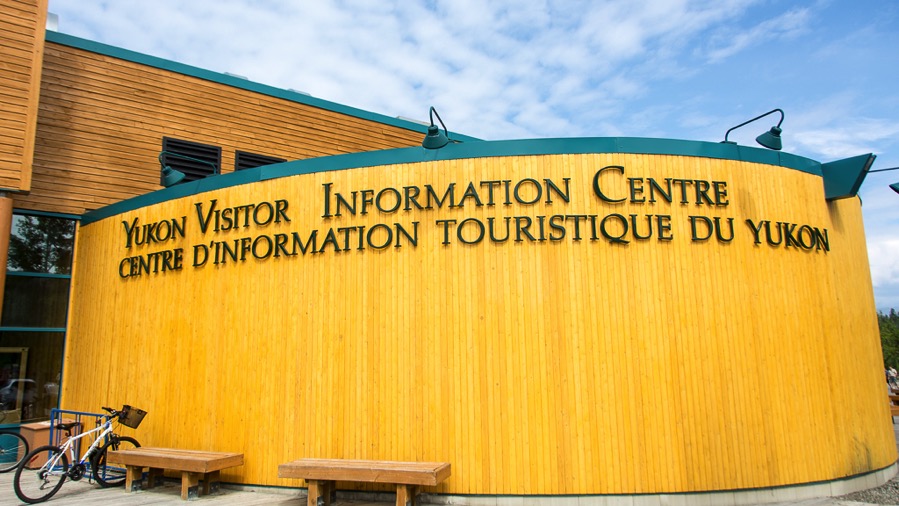 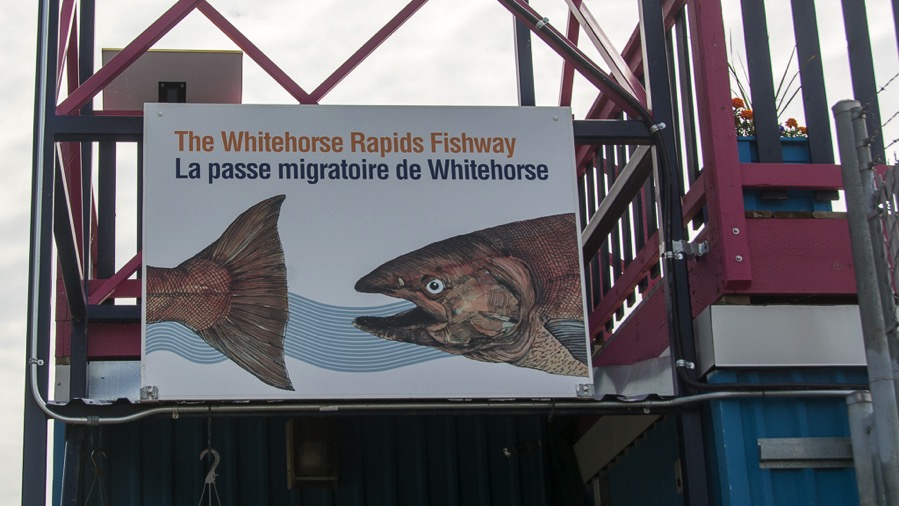 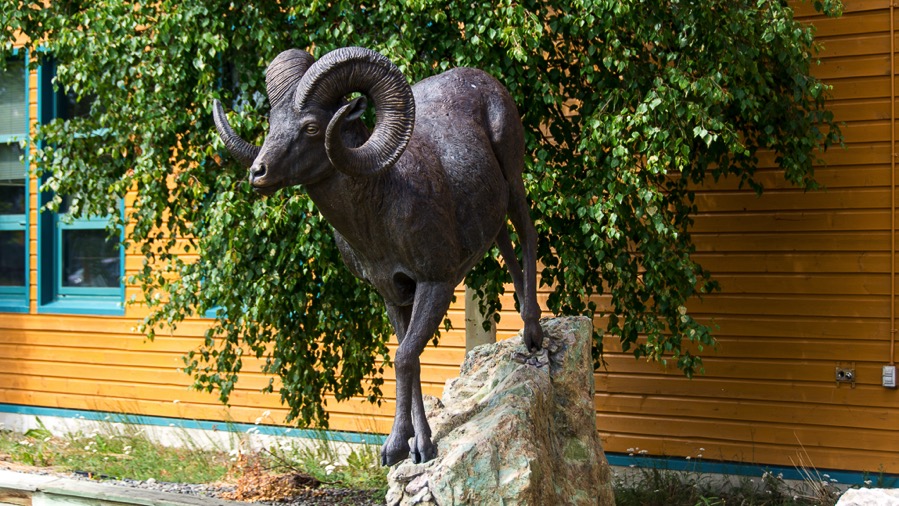 An Arctic Grayling which is one of the fresh water fish that inhabits the Yukon…Neil’s first ship was named after the Grayling although it was a standard Grayling rather than an Arctic one…notice the oversize dorsal fin that most likely is an adaptation to help them navigate and chase prey in the very turbulent Yukon.

The weir producing the waterfall, the fish ladder itself starts to the right (downstream) of the weir and on the near bank. 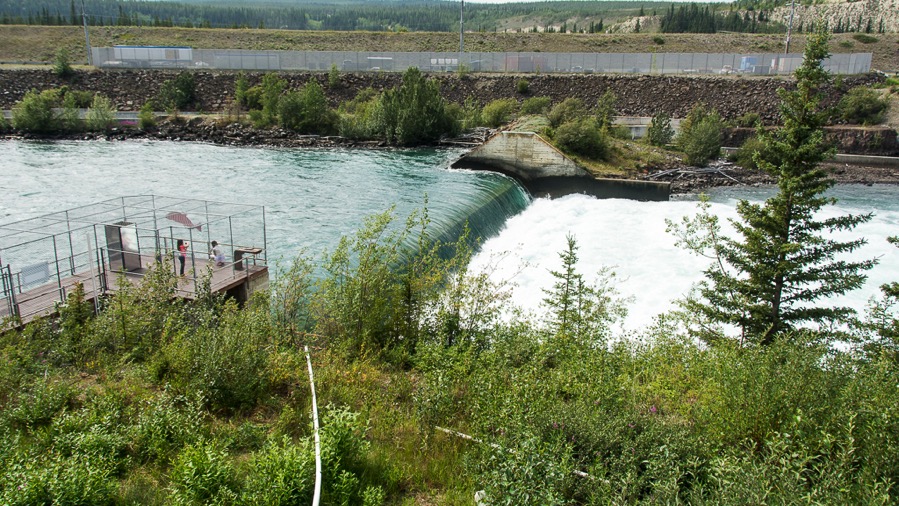 The portion of the ladder coming up from the entrance…you can just see the weir turbulence on the left side of the photo…and can’t really see the walls built within the ladder. Two things to note in this shot…the reversal of the ladder as it leads down to the river and then just below and to the right of the blue building in the background you can barely make out a lighter blue bridge over the river…we’ll come back to that bridge in a minute. 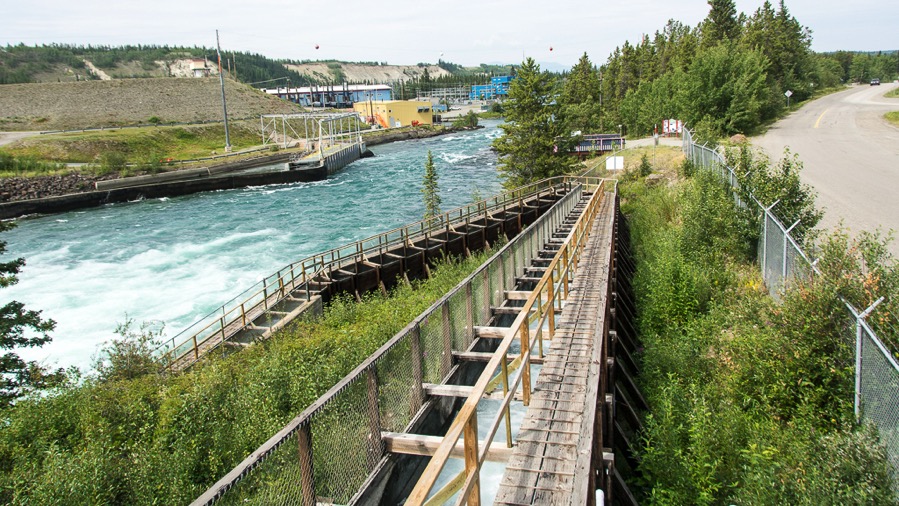 The ladder looking upstream toward the dam from the same spot as the above two photos. It continues upstream to the left around the dam but essentially looks the same all the way until it dumps back into the lake. The white water is at the dam…and is extra water not needed for hydroelectric power right now…this dam is power only and has no flood control role…this combined with the relatively small lake behind it and the large flow of the Yukon results in constant release of excess water via the spillway. 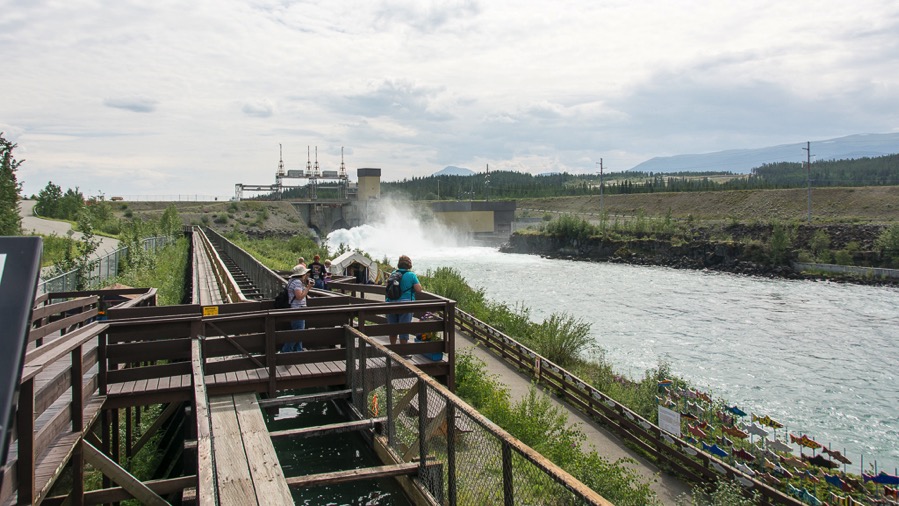 A close up of a portion of the ladder. 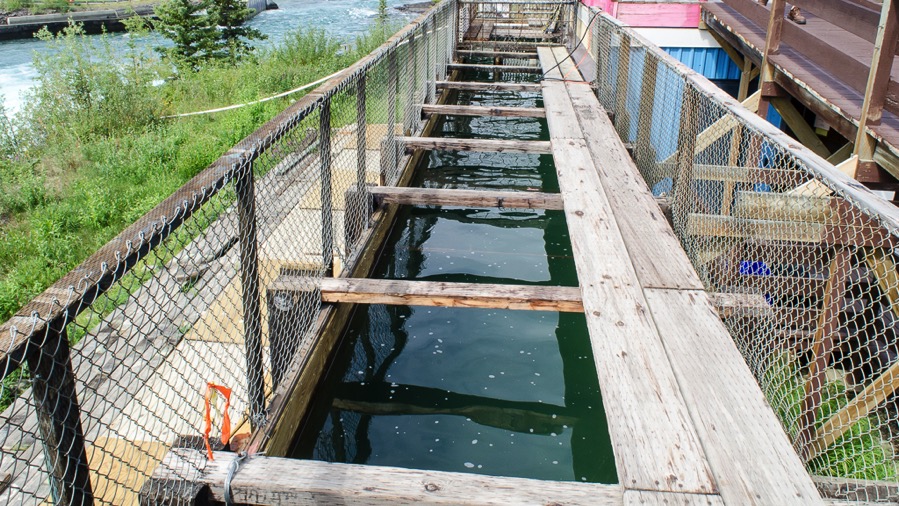 The entrance portion of the ladder immediately downstream of the weir. This is the same steep portion at the left of the 3rd photo back…the fish enter the ladder for a short steep climb to get onto the bank section of the ladder then make a hard right turn into the long upstream portion. Fish take about 24 hours to completely traverse the length of the ladder. 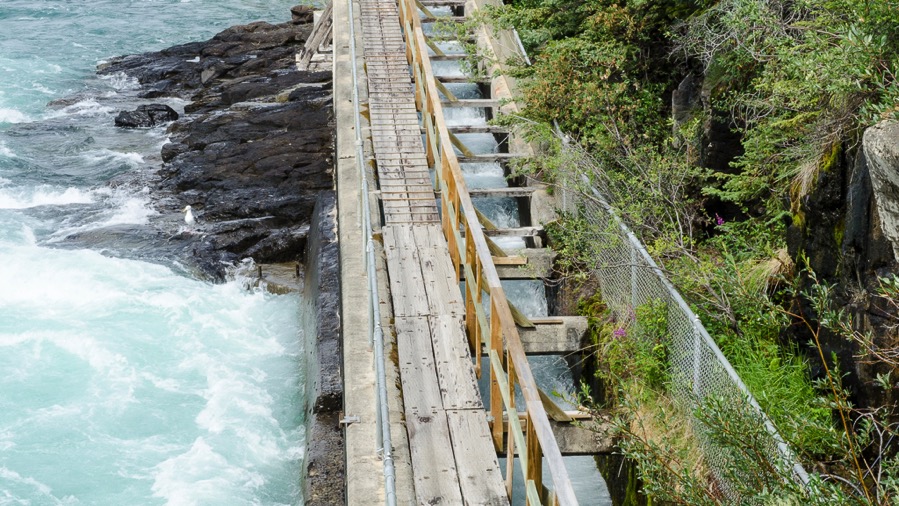 An HDR looking upstream toward the dam from the light blue bridge I told you about before. Neil walked across this bridge today…which means that we’ve now been on both pedestrian bridges and 2 of the 4 vehicle bridges that span the Yukon. On our planned route…we’ll cross the ferry at Dawson City and the bridge at Carmacks…which leaves only the bridge across the Yukon on the Dalton Highway that we won’t have been over. It’s 130 miles from Fairbanks though…so unless one of our Fun Stuff™ days takes us that way we probably won’t spend the time and diesel to go cross it. Even without it though…we’ll have been across 6 of 7 possible Yukon river crossings before returning home.

Another strange fact about the Yukon…as I said the other day it starts in Atlin Lake in northern BC…and is actually within 50 miles of the Pacific Ocean (where it eventually empties via the Bering Sea) at it’s source. Unfortunately it’s surrounded on the west by the Coastal Mountains and on the south and east by other mountain ranges…so the only way it has to go from Atlin Lake is northwards…which leads to a 2,000 mile trip to the sea instead of a 50 mile trip.

The fish ladder starts right below the concrete structure on the left side of the waterfall you can see in the photo below. It proceeds up and to theft then reverses direction right behind the third to last tree coming from the left and proceeds up the slope past the bridge. The gray line you can see running up and to the right just below the fence is the ladder structure. 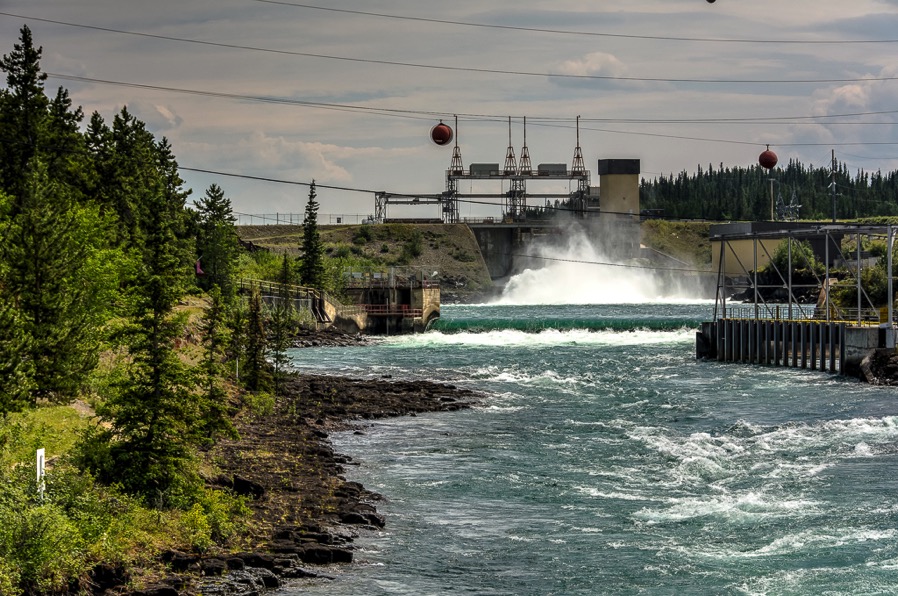 From the fish ladder we headed over to the SS Klondike stern wheeler museum. This is the second SS Klondike and was built in the 1930s or so with parts from the original Klondike that sunk in shallow water. It plied the river between Whitehorse and Dawson City 450 miles downstream for 5 months a year up until 1955…a day and a half going downstream and 4 and a half days coming upstream due to the current…and burned a cord of wood an hour to fire it’s boiler. It retired in 1955 and was turned into a museum and placed in it’s current position on the bank of the river in the early 1960s. It’s a 240 foot long stern wheeler with about a 3 or 4 foot draft and carried mostly cargo to Dawson City on the downstream route and returned with mineral ore upstream to Whitehorse where the ore was transferred to railroad cars for transit south.

An overall view of the vessel. 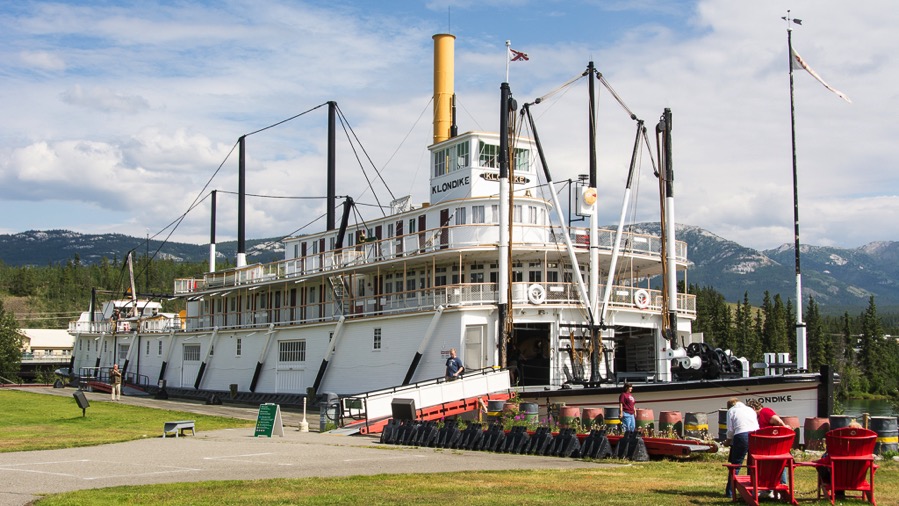 The ship’s capstan…used not only for hauling the anchos up but also for raising and lowering the two large vertical black and white poles you see in the photo above. When the ship got stuck on a sandbar they forced the poles down into the bottom which lifted the ship up and let it lurch forward a couple of feet…this was repeated until the sandbar was passed. It also served to haul on a cable that helped ships pass an area going upstream known as the Five Fingers for some large rocks that stuck out of the water. The current was so strong there that the stern wheel alone could not get the ship upstream…so they attached themselves to a 1,500 foot long cable and winched themselves upstream along with the stern wheel. 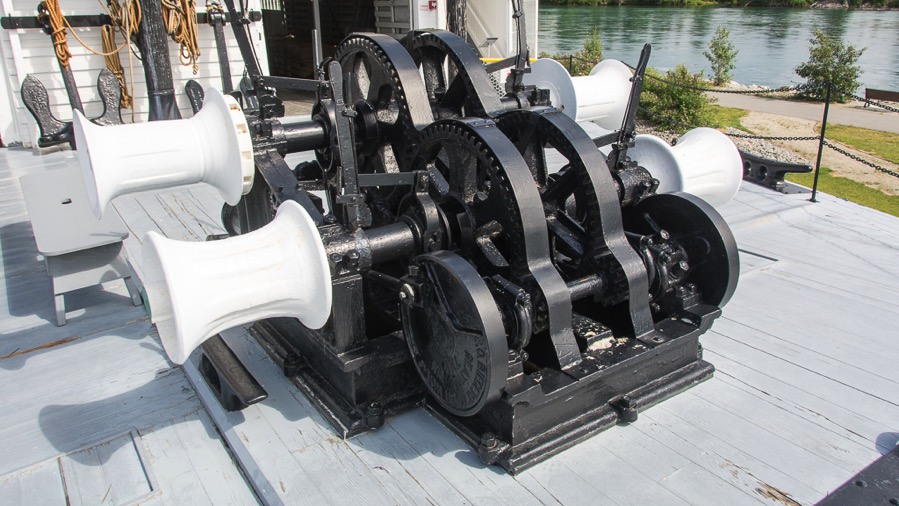 The ships boiler…hand riveted and bolted together…and pressure gauge. You would have to be a very brave engineer to bring this boiler up to 300 psi. 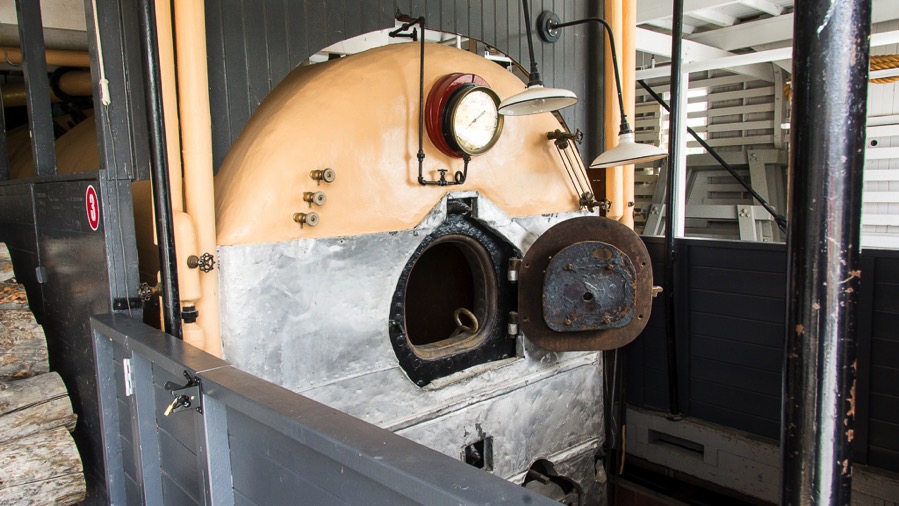 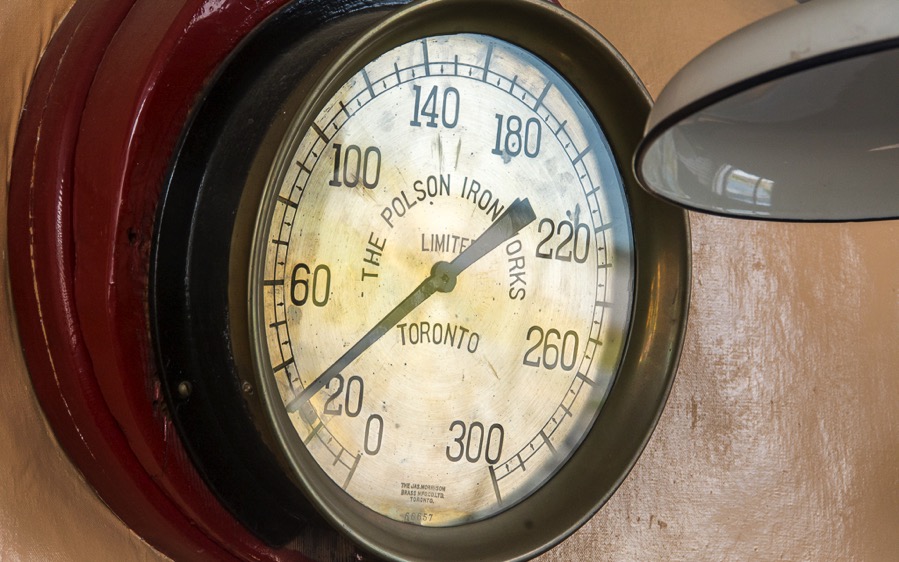 The primary cargo on downstream runs to Dawson City. 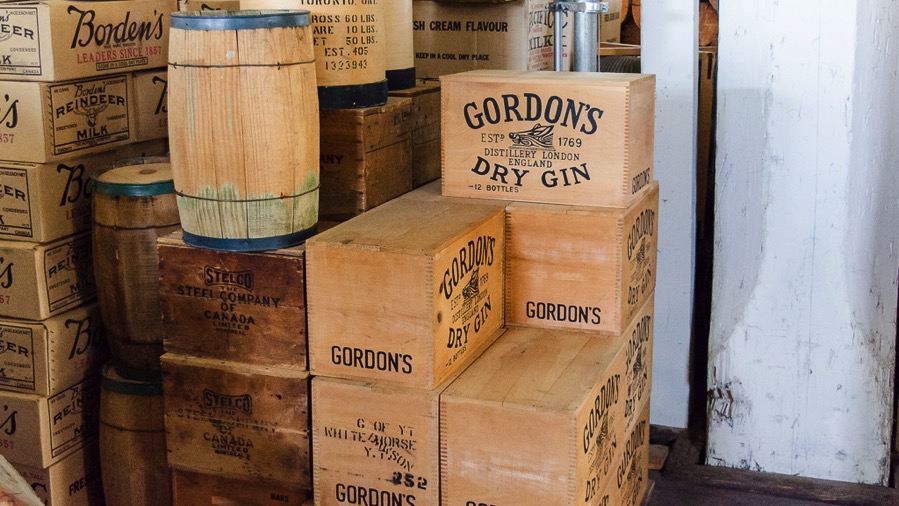 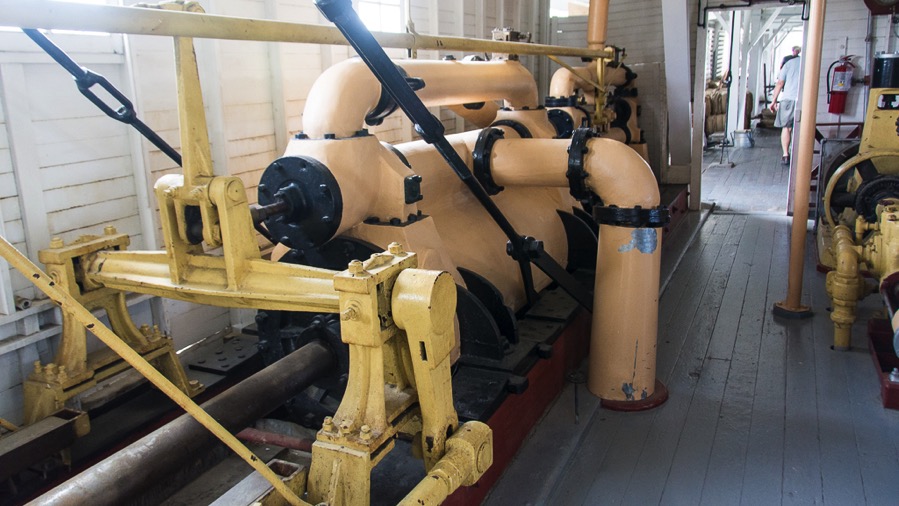 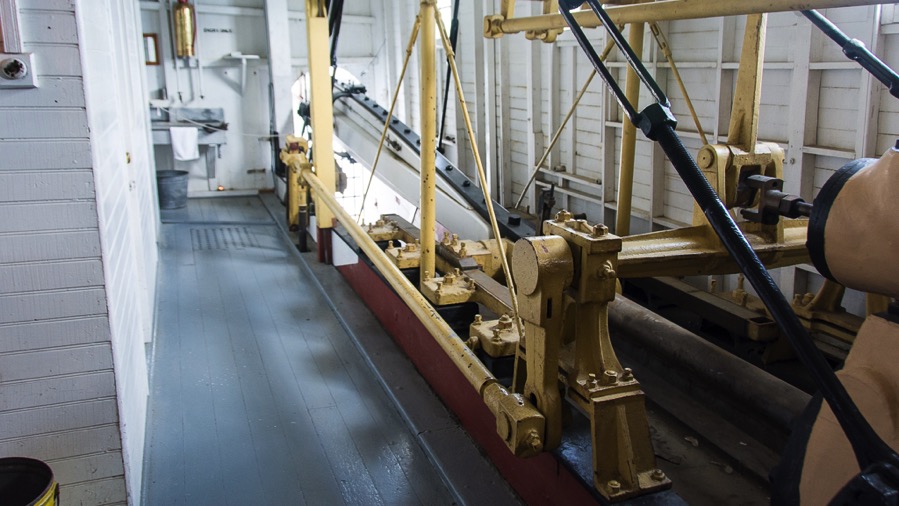 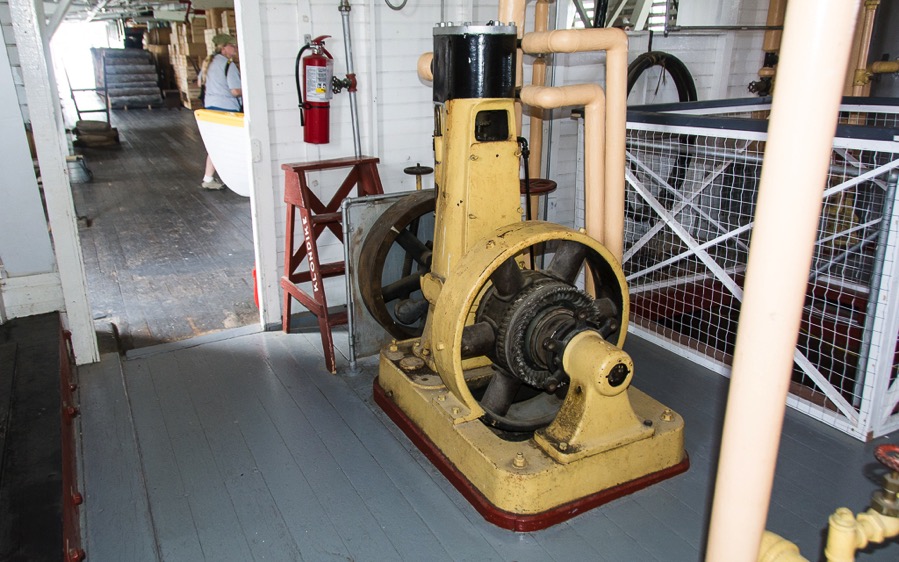 The second of our 3 (or maybe 4) planned Yukon River vehicular bridges…we crossed it to get to the fish ladder. This is looking downstream. 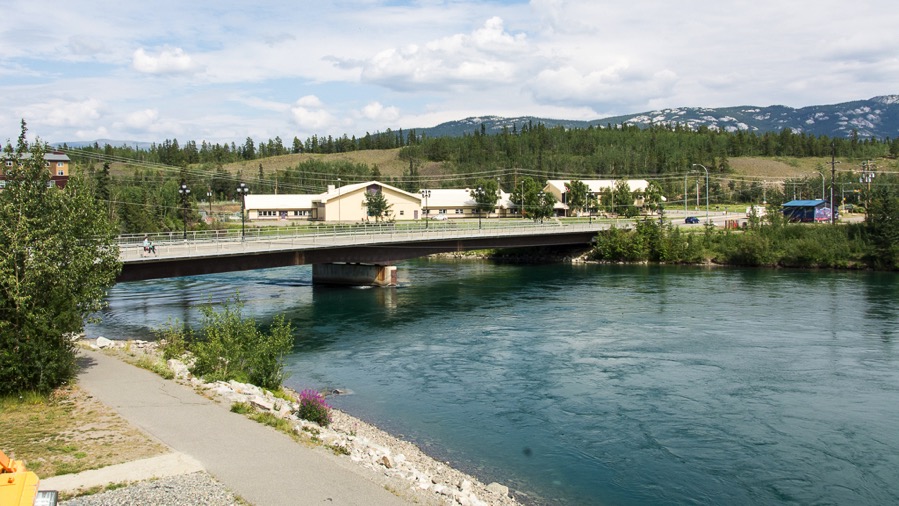 A view of the port sun deck looking forward. Notice the small inset warning in the upper right…I’ve blown it up for ya just in case. Notice that we’re on the cheap seats side of the sign. 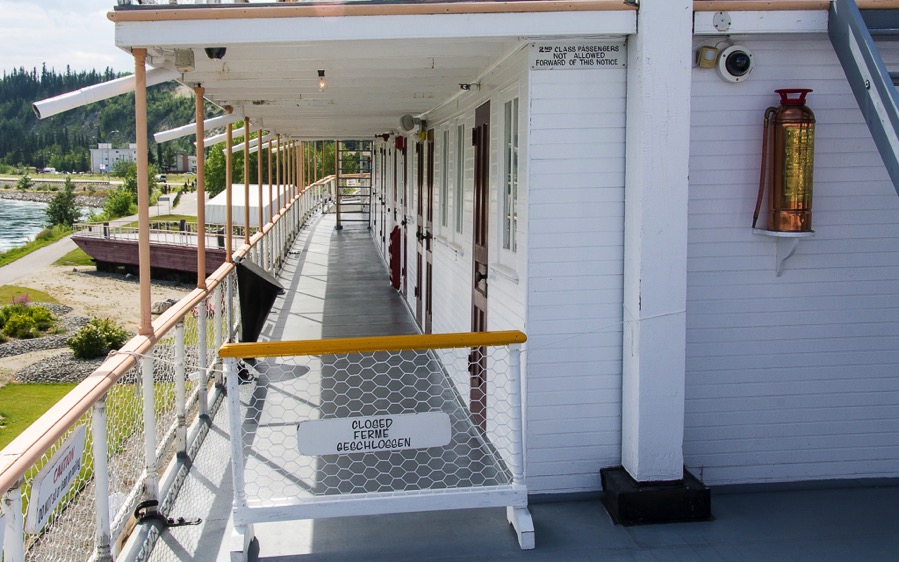 With that our day was done and we headed home. Had dinner with Bill and Linda…she cooked country ribs on the barby and Neil contributed some baked beans as a side dish. After that we had a wine and cheese party hosted by David and Bettie our hosts for the trip and then came home.

Day 8 is an errand day…laundry, groceries, diesel, library for some fast/unmetered Internet access…and perhaps some touristy stuff downtown afterwards and then dinner out with Bill and Linda at the Klondike Inn. So…I’ll go ahead and close this and should we have anything photo-worthy tomorrow I’ll add it to my next post.