Days 36 (Monday Aug 3) and 37 (Tuesday Aug 4) were devoted to moving to and activities around Palmer AK.

Palmer is about 50 miles as the crow flies or 170 miles by road from Seward with most of the drive being a repeat back up the Turnagain Arm and through Anchorage then continue on up towards Denali…about 120 miles after leaving Seward you turn off onto the Glenn Highway which goes east and south a little to Palmer. We got on the road after hitching up and stopping by the dump station about 0700 and pulled into site 29 here at the Mountain View RV Park in Palmer about 1230

Again…this is an appropriately named RV park as there is a very nice mountain visible from all the sites…the only problem is that whoever laid the sites out should have oriented them 90 degrees around so the view was out the back window instead of the almost windowless drivers side of most RVs. Guess we can’t do anything about that though.

We got setup and had no real plans for the remainder of the afternoon…and were down to about 10 gallons of fuel in BAT so Neil ran 3 miles down to the Fred Meyers and filled up with gas…3.33 a gallon and we had a coupon for Alaska RV Travelers that gave us a 20 cents a gallon discount…it was marked as being good for only 35 gallons but we’ve used 4 of these coupons now and gotten it off the full purchase every time. He got 78 gallons of fuel and the discount brought our $260 bill down to $245…pretty darn good I say.

We talked to Bill and Linda about dinner…she wanted pizza and none of us could get really interested in pizza, particularly after we found a bar named Klondike Mike’s that appeared to be a locals bar and advertised wings…so we decided to each steam independently and both of us had a good meal.

We had 2 pints each of Quilter’s Irish Death from Iron Horse Brewery in Ellensburg WA…it’s advertised as an American Strong Ale…but it looked like a stout or porter to us…although it was a little less creamy and lighter in texture than most stouts are. It had a strong cocoa flavor and joins McKinley Stout as the top two brews we’ve had on our trip. Along with it we had some wings that were deep fried then finished on the grill with BBQ sauce…mighty good. After that we came home and had a piece of maple walnut fudge for dessert after a short interlude with our entry door.

We were unable to open our door on our return and after consulting with Bill and trying a half dozen things we finally got it open…Connie went inside and Bill/Neil did their engineer thing and looked for what might be the problem. They quickly isolated it to a little piece of plastic that serves to lock the latch portion of the mechanism but the deadbolt was fine. When the latch lock is opened the plastic piece moves down and was impacting the plywood framing on the door. Neil got out his Dremel and did some minor surgery on the bottom of the lock mechanism opening and all was better.

Today we got up late…no scheduled activities until the afternoon. Connie went off about 1000 and got nails done/pedicure/bangs cut and is now happy again. After that we had a leftover chicken sandwich for lunch then headed off for our visit to the Musk Ox farm nearby…which turned out to be a lot more interesting than one might think. We naturally got the whole history of the private non-profit organization that owns it along with some details about Musk Ox life cycle and such…mixed in with the typical sales pitches for their various items, adopting one of their animals, and other explanations of why they needed to separate you from your money. We got a hat for Neil and a couple other things that family members will find out about later…but don’t hold your breath for any clothing items made out of the qiviut or undercoat wool as the stuff is really expensive…it’s about 100 bucks an ounce and 4 ounces fills a 30 gallon trash bag. We did see a native Alaskan made stocking hat and it was $575 so we passed on that one. If you’ve ever seen a photo of a musk ox…the shaggy stuff you see on the outside is not the qiviut at all…that’s known as the guard hair and it’s thick and scratchy. The qiviut is really fine…feels like really soft cashmere or lambs wool…but at those prices I don’t think we’ll get any of it. It helps keep the animals warm in the -80F winters up here though…so if you did for some deranged reason decide to live up here then investing in some warm clothes made of qiviut just might be a good idea.

We got lots of great photos of the creatures…and amazingly enough were able to get the fence/buildings/man made stuff mostly out of the pictures so it looks like they’re in the wild.

The main visitor center…this is an original building from the settlement of Palmer…back in the day shortly after WWI the government paid some people to move up here and establish the city as the first settlement in the Matsu Valley. Most of the people eventually left but the Musk Ox farm was originally a hay farm that was converted to it’s current home for the domesticated Musk Ox in the 1980s. 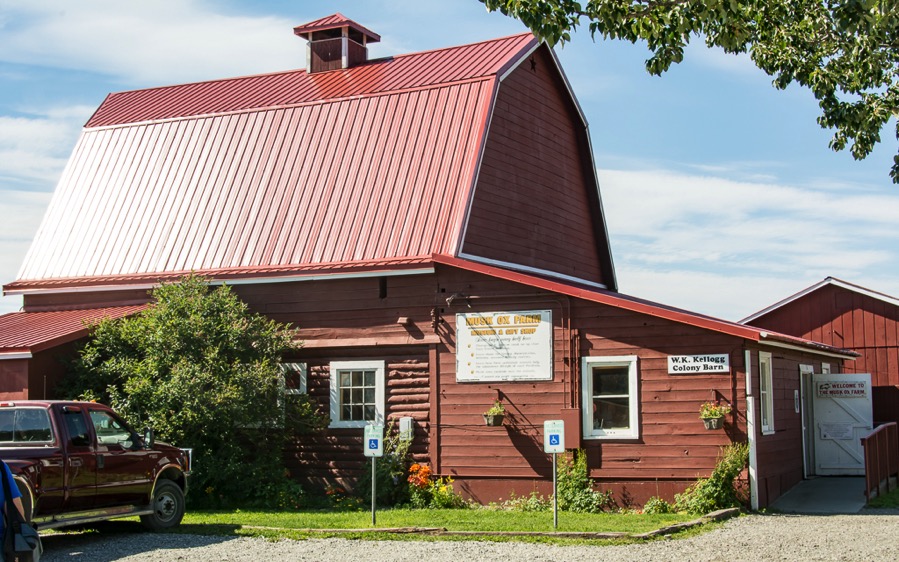 A couple of 2 year old cows…not breeding yet. Their horns are straighter out and the ends are cut (as are the ends on most of the 80odd animals at the farm) to prevent injuring each other. 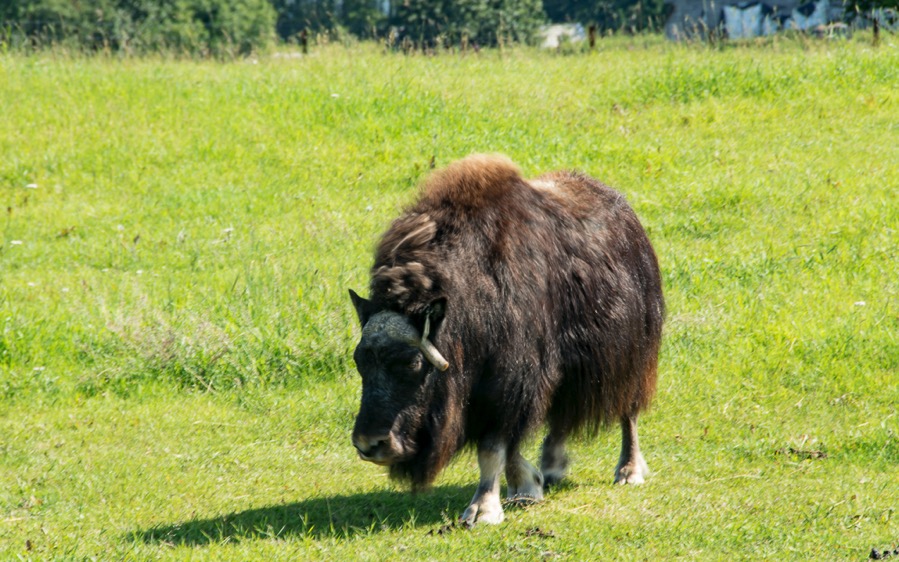 A couple shots of the alpha bull…again his horns have been cut so they have no sharp points. Adult bulls are in the 600 pound range and cows in the 450 pound range.

A couple of shots of a 4 or 5 year old (can’t remember) male…his horns have been left uncut as has his guard hair…so this is what they look like in the wild. The only reason his horns were left alone was his easy going disposition and they wanted to have one that looked completely natural.

The babies…these were born in April and are about 75 pounds each…sort of cute little buggers.

That was it for our day. We came home to have a staff prepared burger and reindeer sausage dinner. Tomorrow we’re off to Glenallen AK for an overnight stop then on to Valdez back on the coast on Thursday for a visit until Monday when we head back north to Tok AK and then north and east back into the Yukon.