Days 51 through 54 (Tuesday Aug 18 through Friday August 21)…we ended up rejiggering the schedule a bit from what was previously planned for the caravan.

On the way to Whitehorse we stopped by the Johnson River Crossing Lodge and Restaurant to buy a cinnamon bun…which was so huge that we ended up with both of us having breakfast off of it for 2 days. Here’s a close up of the monster followed by a shot of it with 2 paper plates for scale. It was mighty tasty…the best cinnamon bun we’ve had on the trip. Not too sweet, soft and gooey, lots of cinnamon, raisins, and just the right amount of icing. 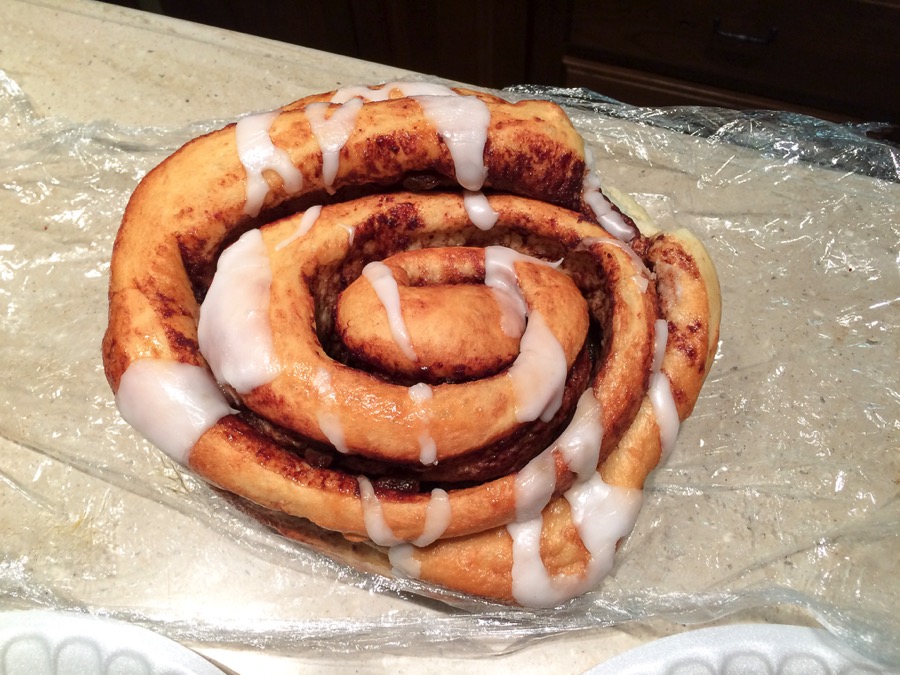 We found this little gem at the Yukon Transportation Museum…it’s a DC-3 that flew back during WWII and then had a long and distinguished career with Canadian Pacific Airlines. Following it’s retirement from that role it sat around the Whitehorse airport being used for spare parts until it was bought by a local aviation buff and turned into the world’s largest weather vane…yup, this thing is mounted on a pedestal and rotates with the nose always pointing into the wind. It actually swung back and forth while we were parked under it taking the pictures.

Day 51 we went on our scheduled bus/train trip down to Skagway AK via the White Pass and Yukon Route narrow gauge railroad…this was originally built back in 1898 to support the gold mining industry and get supplies up from Skagway over the pass to Whitehorse for further transport down the Yukon River to the gold fields in the Dawson City area. Once the gold rush was over the railroad served as a minor supply and people mover before eventually being turned into the tourist attraction it is today. Only 27 miles of the original track remains in service from Fraser BC over the White Pass to Skagway and the original train cars have been refurbished and used to carry people…although the original steam locomotives have been replaced with modern diesel-electric models. The route rises a couple hundred feet from Fraser to the 3,298 foot summit of White Pass then down to sea level at Skagway…this is about as steep a railroad as you can practically build and being on the side of the valley had some great views. We had been warned ahead of time to get seats on the right side of the train for best views…but Neil spent almost the entire trip out on the between cars porch so as to keep reflections out of the photos and to enable him to jump back and forth between sides as necessary. Caravan friends Nick, Phillip, and Sandy spent the trip out there with him as well…along with a few others that popped out occasionally then back inside as it was a bit breezy and chilly out on the porch…Neil just ducked behind the car periodically to warm up. The trip consisted of a bus trip down to Fraser with a stop at Carcross designed to separate you from your money at the mostly cheesy gift shops…then the train ride down to Skagway while the bus took the road down. It picked us up at the depot and dropped us in town for a 2 hour visit where mostly we had lunch then walked around a bit on the way back to the bus…then a 2 hour bus ride back to Whitehorse.

The weather mostly cooperated…it was foggy right at the top of the pass but then we broke out into some sunshine and mixed clouds before we got to the better views. They were pretty stunning…several places you looked over the side of the railroad car porch and were literally hanging over the canyon…in places the rails were within a foot or so of the edge that had been built up with a concrete edge to keep them from falling over…many places there were literally bolts drilled into the rock on the left side of the track that extended under the track, through the concrete lip and had a nut holding the concrete to the side of the mountain…the tracks in these areas were literally bolted to the side of the cliff.

Shots from a lake we stopped by on the way to Carcross…would have been really nice if it had been sunnier. 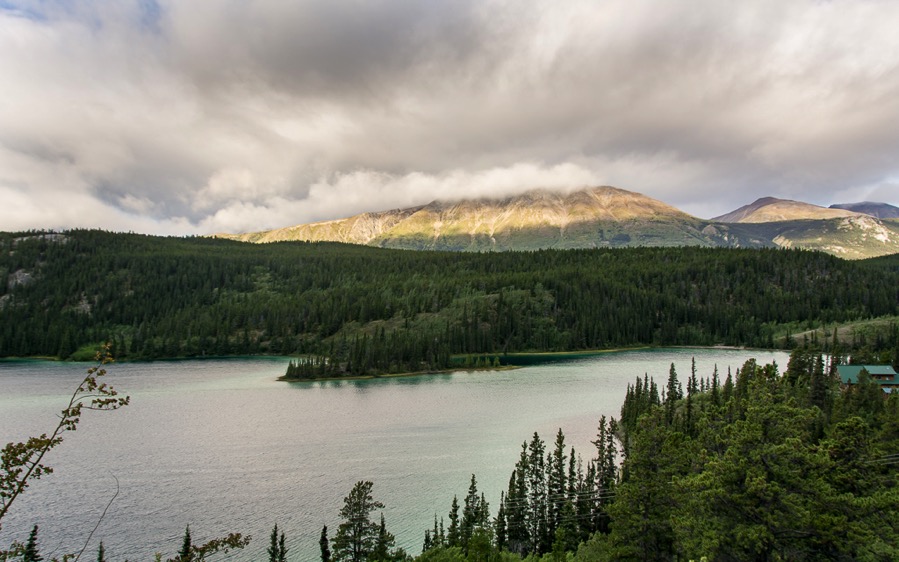 The little town of Carcross YT. About 2 square blocks total.

The lake bordering Fraser BC where we boarded the train…very windy up here so the lake has whitecaps on it. 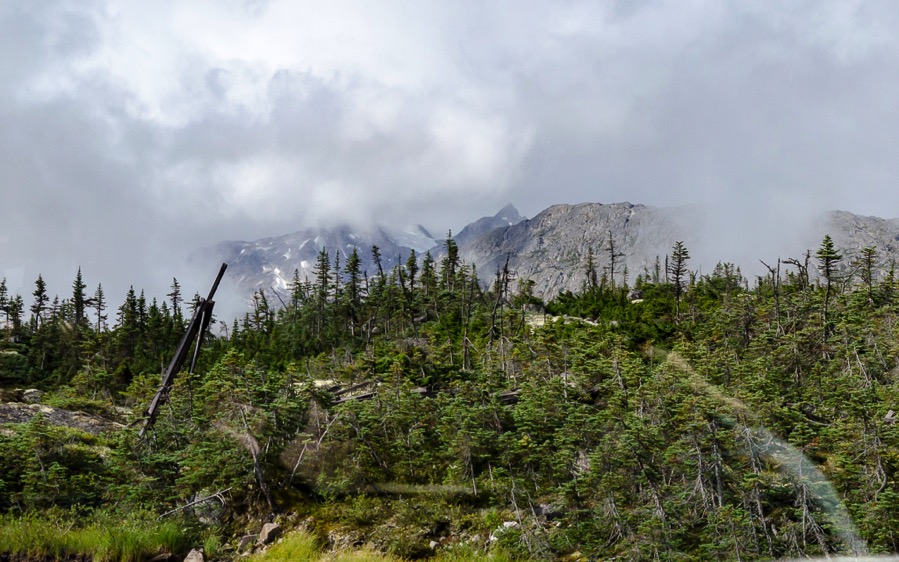 Heading up into White Pass in the mist.

Spotted this rainbow off in the mist as we entered the summit area of the pass. 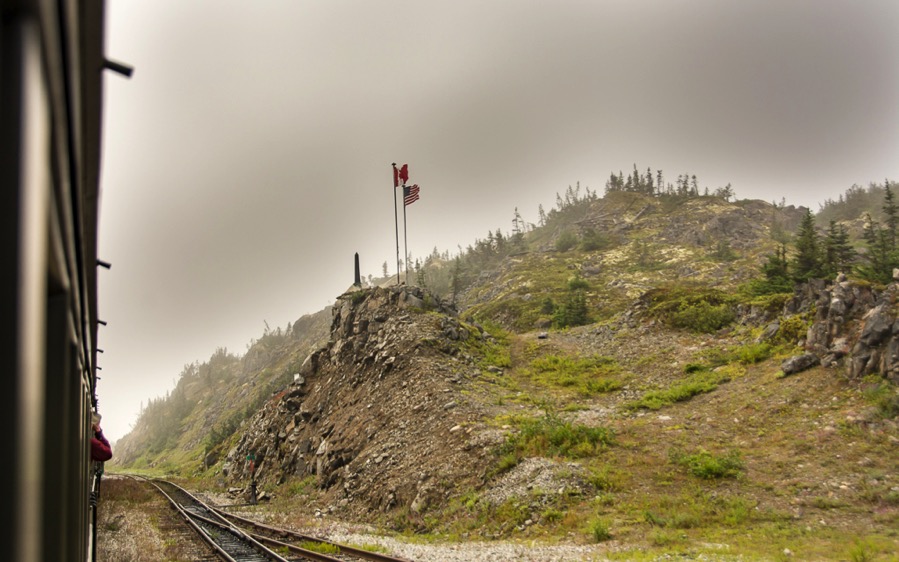 Police station along the line…this was the Northwest Mounted Police which became the RCMP…Royal Canadian Mounted Police…in the early 1900s.

These next two shots are the iconic panorama shots from this tour…everybody that rides the train takes almost this same photo…so here’s ours. The train comes out of a 100 yard long tunnel and crosses this bridge as it turns…note the abandoned trestle coming alongside in the second shot. 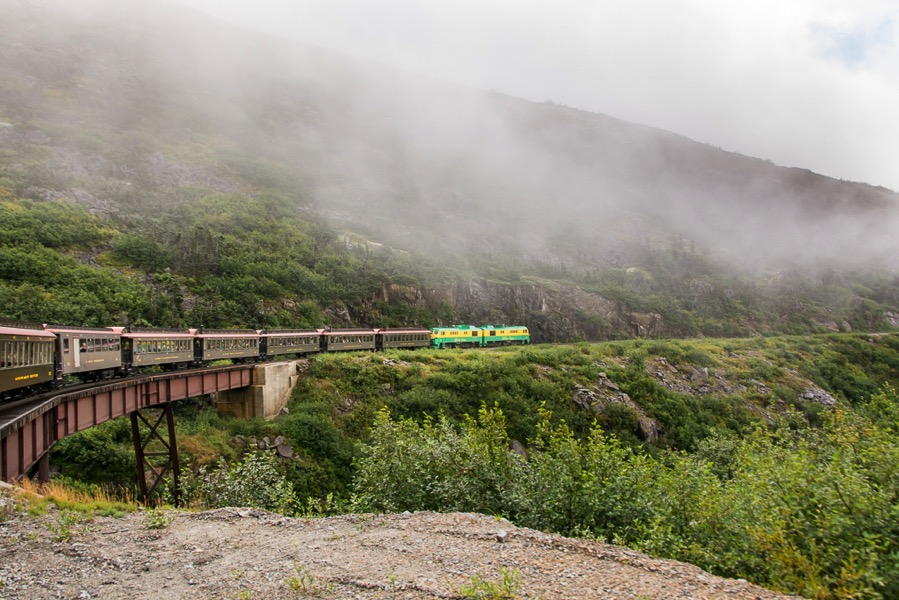 The abandoned trestle itself.

A shot taken from inside the train by Connie…wider view than Neil’s shots but you can see the abandoned trestle and the deep gorge it crosses. 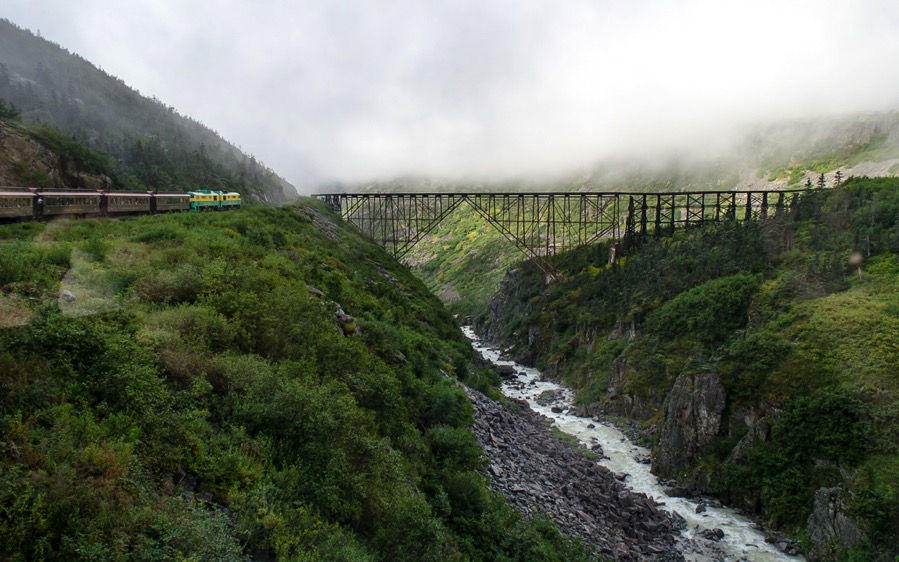 Looking backwards along the train from the same position as the above shot…note the vertical beams holding the track to the cliff and the bolts holding the beams to the cliff. The drop here was 500 or 700 feet I think…almost straight down.

Another shot by Connie from inside showing the edge of the gorge…it’s even got some reflections in it from other inside passengers.

Getting a little flatter and almost back into the tree line. 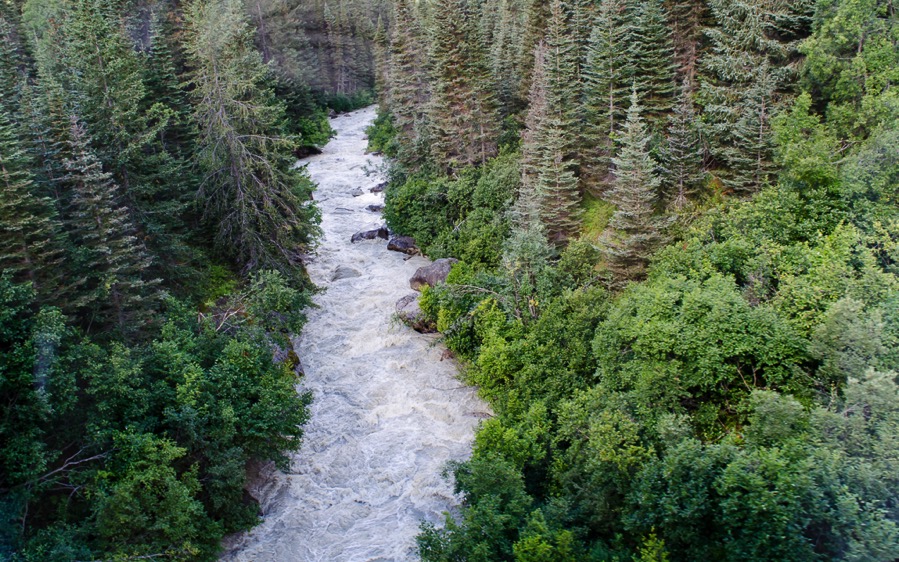 In the forest again heading into Skagway AK. 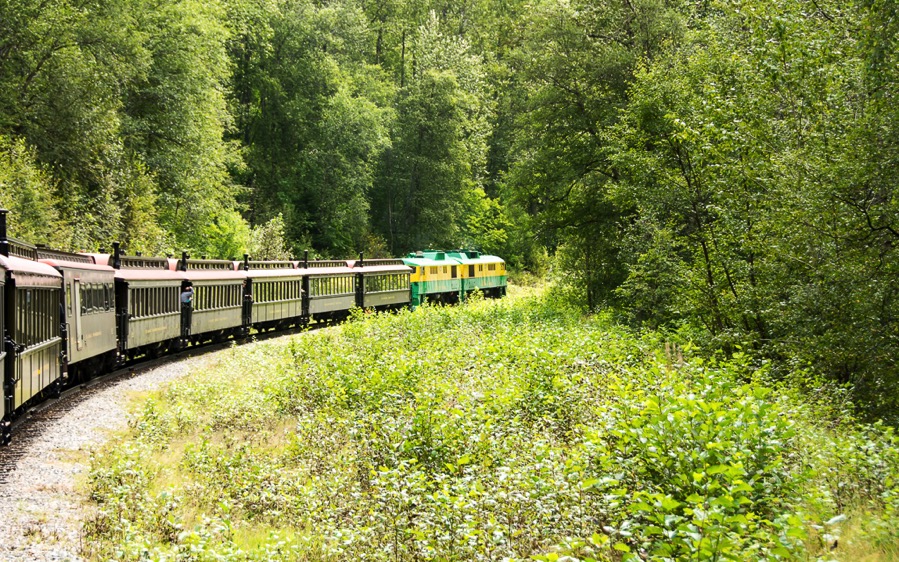 Following our train ride we rode the bus into town then headed into the Red Onion Saloon for lunch…this was a bordello back in the day.

Our waitress…nicely dressed up in what your best dressed soiled dove wore back in 1898…corset and everything. She was quite glad to pose for us with the girls.

Paintings from over the bar. 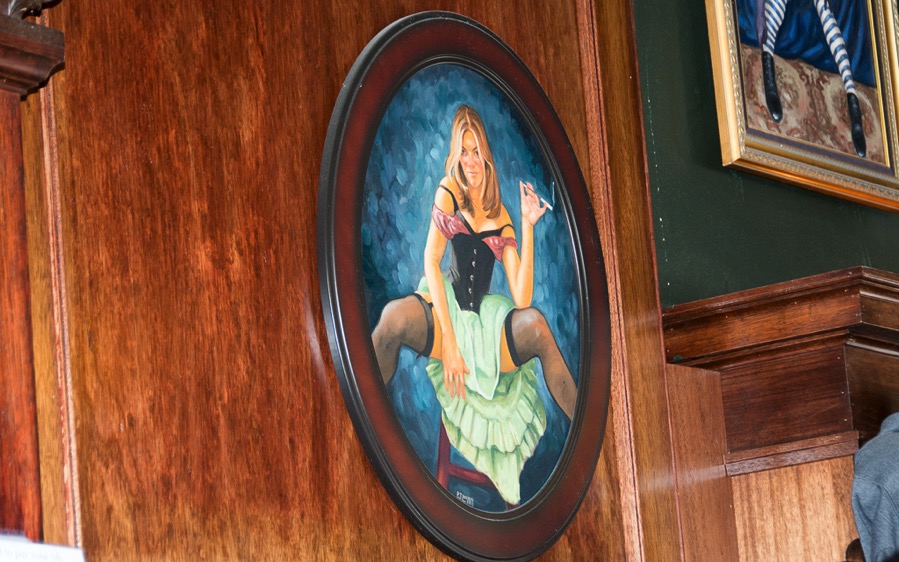 The owner/madam…she was taking this group upstairs for what she referred to as “afternoon delight”. Deciding to forego the charms of the ladies…we settled for a couple pints of Hard Cider…hey, it’s a nice lunch beer…and a couple of sandwiches.

Shots of downtown Skagway…not quite as frontier as Dawson City…but pretty close. 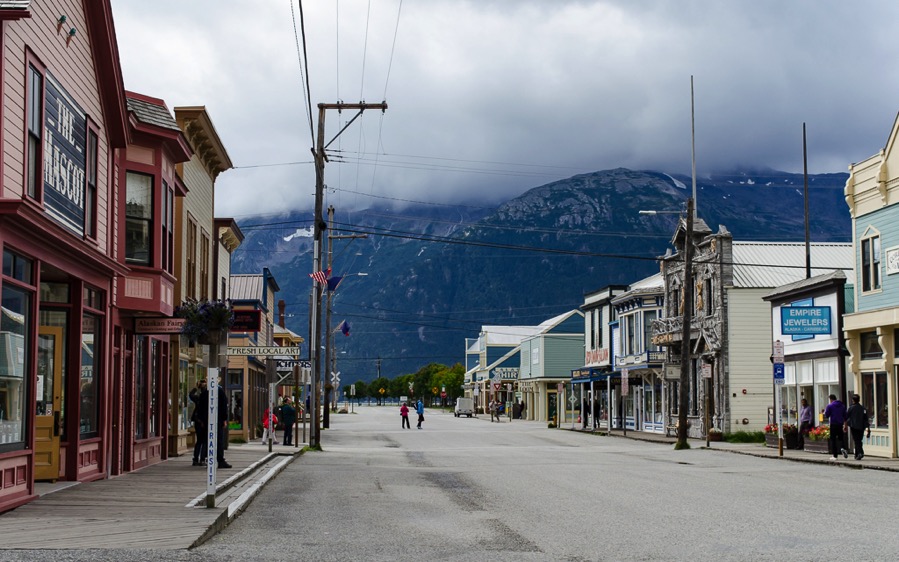 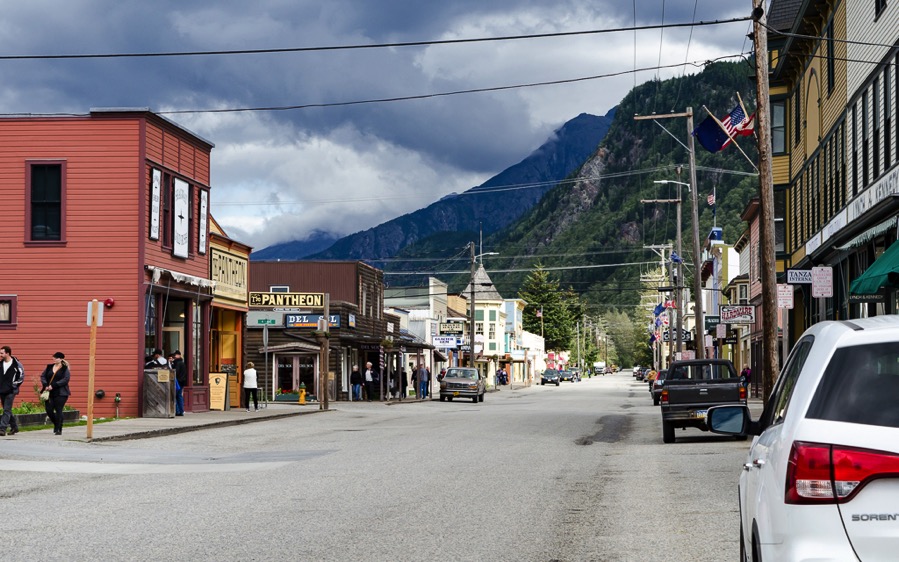 Once we got back from the train ride we quickly…along with several other of our caravan members…finished supervising Bill finishing up another minor mechanical repair. After that it was dinner and then we sort of had a change of plans.

Originally Day 52 (Wednesday August 19) was a free day in Whitehorse followed by a 115 mile trip to Teslin Lake YT on Thursday and another 150 miles to Watson Lake YT on Friday. Instead…we packed up and left early Wednesday AM for a single trip to Watson Lake…essentially we wanted to escort Bill and Linda on the first day of their trip back east just in case they had additional problems on the road. Things went pretty well on the journey…no issues cropped up so we crawled underneath both rigs in the rain to do a look-see for any additional problems. His rig looked fine so they headed off early Thursday morning to continue south and east toward Elkhart IN for repairs at MORryde. However, on examination of our rig we found that the final original New Horizons installed brake pad had failed resulting in a scored rotor and damaged caliper…we should have had those pads replaced in May at MORryde ourselves but they seemed fine so we skipped it. Bad idea it turned out. After some discussion with Bill…we went ahead and pulled the bad caliper/pads off of that wheel and capped the brake line. All other brakes are fine so we’ll just live with 5 of them and be a little more cautious on hills until we can get them repaired. Neil’s got some email out to see if we can get parts in Prince George…if so then we’ll see if our friend Phillip from the caravan can assist…at worst he can do the install alone but having another guy to hold things and another pair of eyes would be good. If we can’t get parts then we’ll just…assuming that we have no issues with only having 5 brakes instead of 6…continue on with our planned trip and stop by Elkhart IN instead of Indianapolis on the way back east to have it replaced. As to having only 5 brakes…don’t worry about us being unsafe as we were on some pretty steep grades in West Virginia when we headed out from Marion NC in May for our previous stop at MORryde…and we did that trip with only 4 brakes so 5 will be easy-peasey. Now that  Neil has been fully trained on using engine braking for most of the stopping power he feels plenty safe with 5 until we can get the parts.

It rained all day so we didn’t get any pictures…which was OK since we had already seen that piece of road just going the other way as we approached Whitehorse from the south a month and some back.

Day 53 (Thursday August 20) dawned again rainy…so after we saw Bill and Linda off on their trip south then off to the Visitor Center for some internet after a great French Toast breakfast that Neil made. Goofed off all afternoon and had some pork for dinner.

Day 54 (Friday August 21) was a repeat of day 53…mostly we were just resting up as the caravan schedule has been pretty hard and we are plain ole tuckered out. The rest of the caravan caught up to us at Baby Nugget RV in Watson Lake YT.

Day 55 we’re off to Iskut BC then Day 56 on to Hyder AK where we’ll have two free days to rest, see the sights, and do touristy stuff…Neil hears there are more bears there so hopefully we’ll spot some.