We left early Monday morning 21 September from Indianapolis headed towards Richmond. Our first day was long…about 410 miles to an overnight stop at Summer Wind RV Park in Grassy Meadows WV…pretty nice spot although we did have a little adventure on the way.

We normally keep our GPS set to avoid tolls since the charge for BAT and the house is pretty big. While this is almost always a great idea…our suggestion is that if you’re in East Alaska, er, West Virginia…just pay the toll instead. We were headed south and east on I-64 and part of that is the WV Turnpike. Our GPS…since it was in toll avoidance mode…cheerfully directed us off onto US-60 and it looked like we went through a couple of small towns for about 60 miles then got back on I-64 south of the tolls to continue.

That worked fine for the first 20 miles…then we got to the end of a relatively nice 2 lane highway and turned up a steep hairpin switchback turn that started climbing up a ridge. Before we knew it…we were deep in banjo country…Connie told me to drive faster, she heard banjos. Trouble was…you couldn’t drive any faster. We spent the next 40 miles averaging about 30 miles an hour, twisting up and down the ridges and hollers, rounding blind curves, and a great deal of time spent in the wrong lane to avoid tree limbs that looked low. We kept seeing semi trailers headed the other way so we knew we weren’t lost but we were really glad to get to the end of the no toll portion and get back onto a decent road.

We arrived at Grassy Meadows and got set up for our overnight…full hookup but we only did power although Neil did dump the gray tank in the AM since our next destination at Pocahontas State Park has no sewer hookups at the site. Hit the road again about 0800 Tuesday morning and arrived in Chesterfield VA at Pocahontas State Park for our 6 day stay a little after noon.

With the UCI World Bicycle Championships in Richmond this week…we figured that the RV park would be pretty full and had pretty much resigned ourselves to a lousy, hard to get into site with no satellite visibility. However, we were pleasantly surprised to find the park only about 20% full which meant we had our pick of sites. We drove around once and the sites we were in the last 3 times were all open so that meant good satellite views but we ended up instead in site 110…a great, long site with excellent views and satellite visibility. We had lusted over this site several times in the past but it was never open when we arrived. Best of all…the group camping site is just across from it so after Neil moved the “Don’t Park Here” sign temporarily he was able to pull forward into the group site which made backing in easy-peasy. Here’s a shot of our setup. 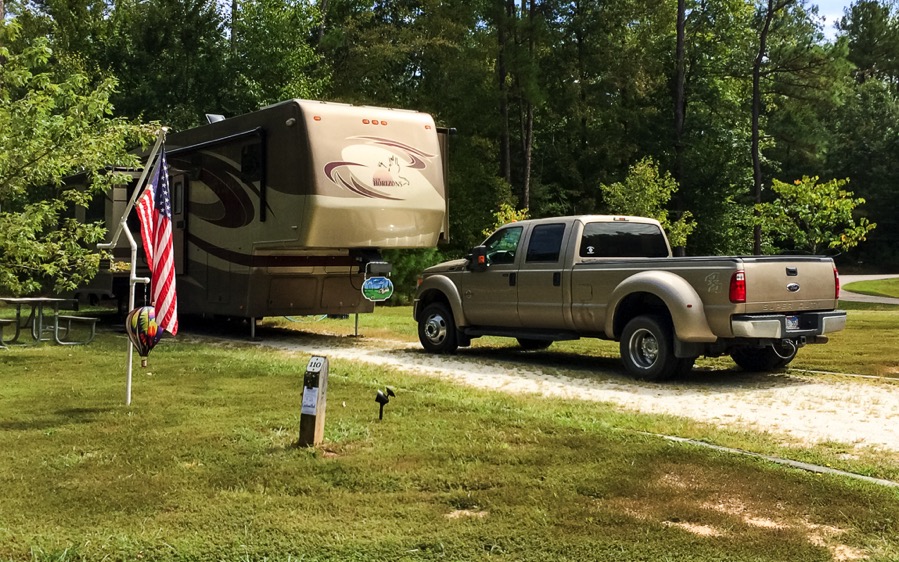 We got setup…now that we’re off the caravan we put the decorations, flag, and sign and we like that much better than a series of overnight stops…that just ain’t much fun. After that we headed over to Bryan and Jen’s to see Alex and ate dinner with them before heading out with them to get some frozen yogurt. We picked up the car while we were there as well so now we’re a 2 vehicle family again.

Wednesday we headed out about 1000 or so for Richmond…it was the day for the Men’s Elite Time Trial Race. We had made parking arrangements about 3 miles from the finish line; the race folks have parking with a shuttle back and forth so we figured that was easiest. We ran into Wayne (Jen’s mother’s husband) near the finish line so after lunch at a local bistro hung out with him and his friend Tom for the afternoon. Tom turned out to be a bike racing fan as well so Connie and Tom had a great time. Neil thought it was so-so and was happiest when the sun went behind the clouds periodically as it was a warm day. None of Connie’s favorites won the race so when it was over we walked the 6 or 8 blocks back to the shuttle point and on arrival back at the car headed home. After a quick shower at the bath house…since no sewer connections at the sites here…we grabbed the steak we had taken out for dinner and headed over to Bryan’s again. He cooked the steak along with one he had taken out and we had cheesy pasta and the last of Neil’s caramel pecan brownies to go with it.

Thursday Neil went over and got BAT’s oil changed and the front end aligned since it was wearing the front right tire unevenly. Connie headed off for a mammogram and then we went over to Bryan’s…gee, starting to notice a pattern here…again for dinner. And we’ll be over there again on Friday…Jen’s working days of course at school and Bryan leaves at 1400 or so for an evening/closing shift at work so we’re giving Jen’s mom/daycare sitter the day off and we’ll watch Alex in between. Besides…we are going over to mooch some free laundry anyway. After that…well, it’s Jen’s birthday so we’re going to take her out to celebrate.

Saturday we stayed at home mostly and Sunday went over to the bike race again…it was the Men’s Elite Road Race which was eventually won by Peter Sagan…Connie claimed that some other guys were definitely going to fight it out and the winner would be one of them but Sagan blew them all away on the last hill and held on for the victory.

I can’t believe they let the photographers go out on the course like this…maybe 20 yards from the finish line with bikes spread across the road coming toward them at 30 or 35 miles an hour…the poor bikers have to dodge around the camera guys. They coulda easily put them up on the stand to the right and made it a lot safer.

A few more photos from around the finish line. 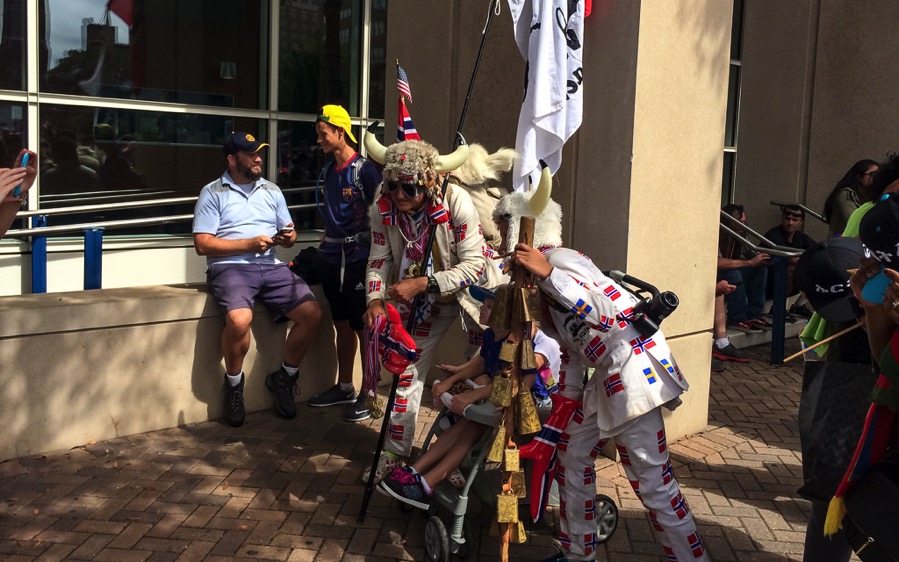 Monday morning we got up early and hit the road for our 130 mile transit down to Smith Mountain Lake State Park in Huddleston VA…down in the southwest corner near Roanoke. Turned out we were the only RV in the campground most of the 4 days we were there; the only drawback was that it mostly rained the whole time…we were in the middle of a bunch of fronts coming in off the Gulf of Mexico and bringing wave after wave of rain our way. We did get out on the one good day (Wednesday) and looked around the park a little but Connie was having one of her inner ear vertigo spells and was pretty dizzy the whole week so we didn’t do much hiking. We did spot this snapping turtle in the road and Neil got some photos…he wasn’t moving so we had to drive on the grass to get around it. We also got a couple of shots of the lake itself. Other than the single outing we went out to the local town to a place named East Lake Restaurant for dinner and Connie worked. Neil re-stowed the basement, the trunk of the car, and the back seat of BAT to get all our stuff back in it’s normal 2 vehicle travel alignment. 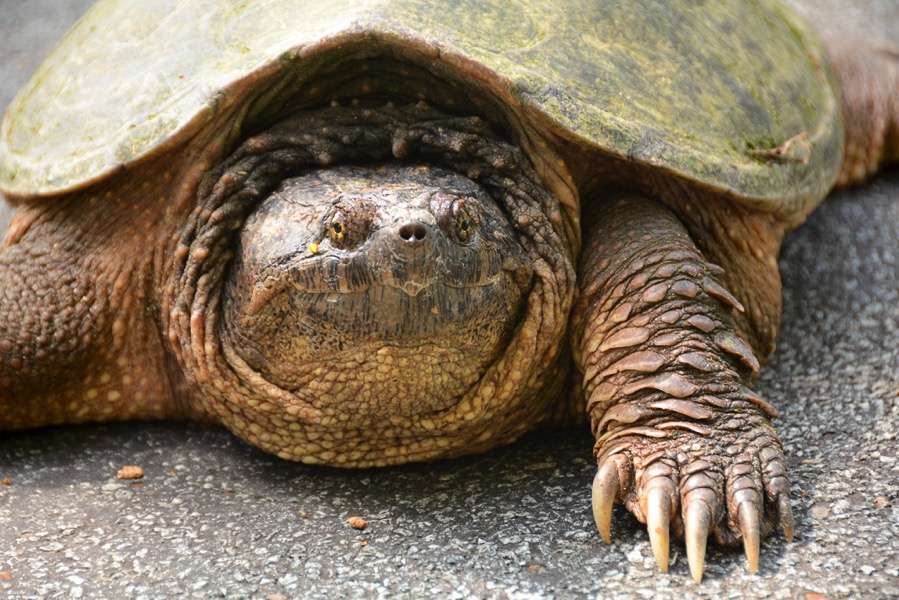 Smith Mountain Lake…like most lakes in the eastern mountains…is artificial and was formed primarily for hydro electric and flood control purposes with recreation being a secondary purpose. It’s out in the middle of nowhere pretty much…and is your typical mountain valley lake with lots of shoreline and coves compared to the overall size of the lake. We would definitely consider staying there again…the only real drawbacks were the stink bug population as it’s getting into fall here and the limited number of spaces we would be able to get the house into easily. The ranger gave us a choice of 5 pull throughs and while the one we ended up in was great the other 4 would have been problematic as far as getting in and out of them. She didn’t offer us any of the back ins…not sure whether this was because we had paid for a pull through or some sort of size limit…but there are 6 or 8 back in sites that we would easily fit into as well…we’ll have to keep that in mind if we stay here again. The other drawback is the out in the middle of nowhere …there’s a pub about 2 miles away but it’s seasonal and this late in the season (late September) it’s only open on the weekends…and it’s a 10 or 12 mile drive to the other town that’s open more year round. The state park is on the east side of the lake and most of the civilization is over on the west side…there’s another commercial park over nearer to town that we’ll check out if we come here again.

After a 4 day stay here…we’ll be off early in the morning on Oct 2 to get over to Heiskell TN right outside of Knoxville…we’ll be staying at the Escapees Raccoon Valley location again. Neil’s sister MJ will be up tomorrow evening for burgers and we’ll go over to her house on Saturday for the Alabama football game, a little laundry, and some unmetered Internet…the new Mac OS X El Capitan was released this week and Neil needs to download it so we can upgrade. We’ll just stay in Knoxville for the weekend then on Monday we’ll move 40 miles or so over to Smoky Mountains National Park for a few days…it’s supposed to not rain next week so hopefully we’ll be able to get in some hikes. After that we’re off to Tuscaloosa AL for the weekend thence on southwards to Coffeeville AL.

Coffeeville has 2 attractions for us…first off it’s a nice COE campground and we’re just gradually moving south before our last two weeks in the Pensacola FL and Cedar Key FL areas before arriving back in Fort Myers. Second…it’s right near Sunflower AL which is where the Laubenthal Land and Timber Company property is located. For those of you who have never heard of this…LL&T was founded back in the 50s by Neil’s paternal grandfather and his 4 brothers. It’s been a lumber and paper pulp wood operation since…was turned into a corporation in 1960 and we have some shares that give us a nice little check once a year. Anyways…Neil hasn’t been up to the property since he was a boy scout back in the ‘60s and Neil has never seen it so we’re going to run over from Coffeeville one day and drive around so she can check it out. We’ll probably have to do a little looking around to find the property and look at it but it will be the adventure portion of the tour as we frequently say.