OK, in my last post I just talked about dinner on Sunday in Tuscaloosa…but what I shoulda talked about was where we went.

We set off from the Elks Lodge about 1620 or so and decided to run by the stadium on the way and  get a couple of photos. After having quite a detour around the city as there is a lot of bridge construction we ended up at the stadium and took a few shots then headed on over for dinner.

Our dinner was at Dreamland BBQ; which is pretty much an institution in these parts. It started way back when when the owner had a dream to open a restaurant on the property next to his house and all he knew was BBQ. As is very common in the south…he was an African American man…and from long experience eating the food in Alabama the very best BBQ joints are usually run by elderly black gentlemen who learned to smoke meat at their father’s and grandfather’s knees. There’s nothing racial about smoking meat of course…but a high percentage of the best joints are run by men or women like this…dunno why except they know good BBQ when they see it.

Dreamland has a dozen or so locations and these days all of them save 1 have a varied menu…pork, brisket, sausage, ribs and all the fixins. The original however…remains true to it’s roots and serves a menu consisting of ribs and white bread. They did relent 20 or so years back and now have sides and banana puddin’ for your sweet tooth…but as far as meat goes it’s ribs or…ribs.

We ordered a slab and 2 sides…beans for Neil and tater salad for Connie. The ribs come with a mustard sauce on top of the rub and slow smoking and were rich, meaty, and delicious. Our waitress Gwen brought them over along with the sides and a couple of sweet teas…no brews in Alabama on Sunday ya know.

A few shots of the inside of the place…it’s in sort of a run down looking neighborhood but again…most of the really good BBQ places ain’t much to look at from the outside. The inside and the food however…are another thing entirely.

Here’s a shot of Bryant Denny Stadium which is located on Paul W. Bryant Drive in the middle of campus…and some shots of a couple of coaches who ya mighta heared tell of somewhere along the way. It was nice and quiet on a Sunday afternoon…quite a contrast to being filled with 100,000+ screaming Tide and Hog fans the evening before. It was hard to tell the fans apart on the TV screen as both were wearing red. The game itself was won by the Tide although it was a lot closer than we thought it would be…despite making lots of yards between the 20s and being way ahead in the stats we were trailing late in the 3rd quarter 3-7 thanks to some inspired goal line defense by the Razorbacks and a couple of turnovers by the Tide’s offense. Late in the third we got an 89 yard TD pass when the receiver was 10 yards behind the defense. A turnover by Arkansas led to another quick score and a long run by our running back got us 24 unanswered points in about 10 minutes. Arkansas scored a meaningless touchdown on a lucky break late in the game to make the final score 27-14. Next up is Texas A&M this Saturday. 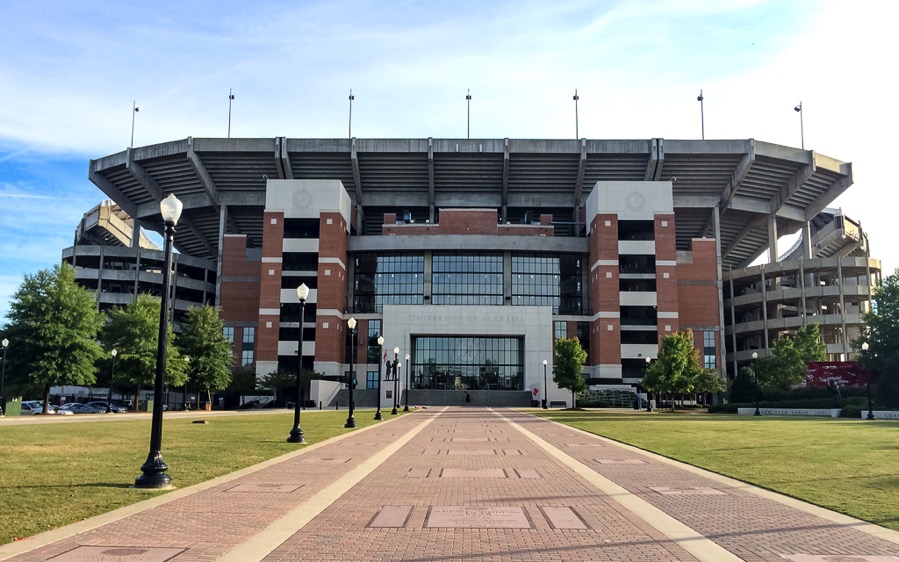 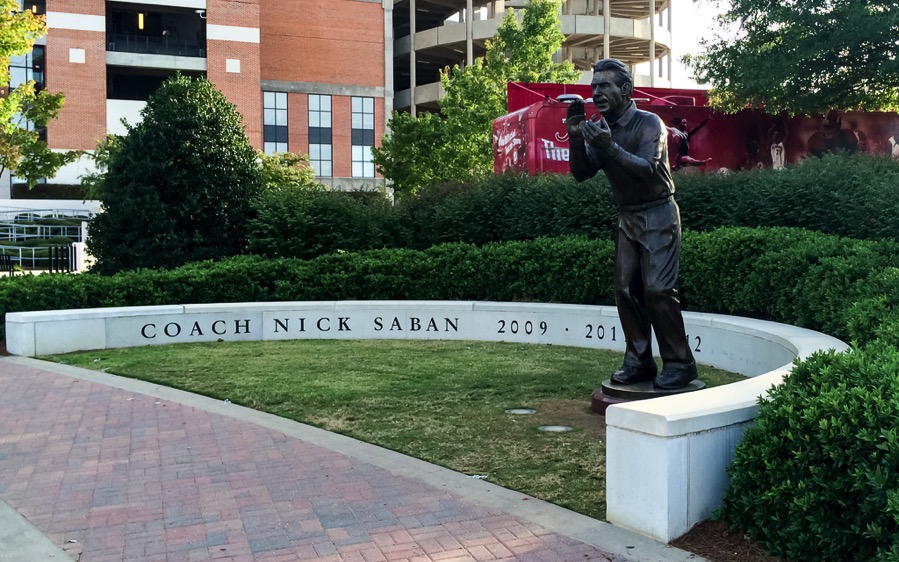 We headed out early the next morning and after a 140 mile drive got parked at the Service COE Campground on the Tombigbee River just outside of Coffeville AL…our stop here was to allow us to visit Sunflower AL so Connie could see the land that the Laubenthal Land and Timber Company owns there. A few shots from the campground.

Tug and tow passing by while Neil was grilling some brats for dinner. 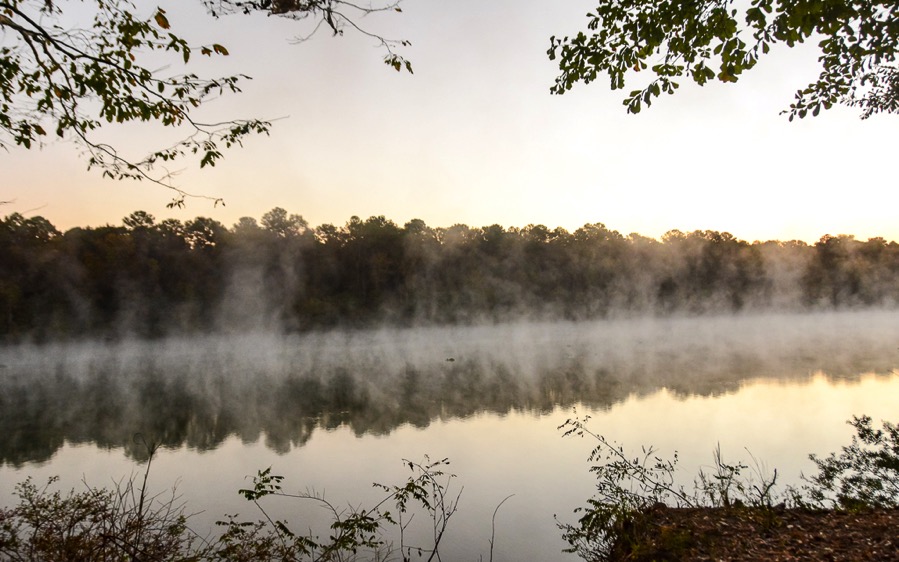 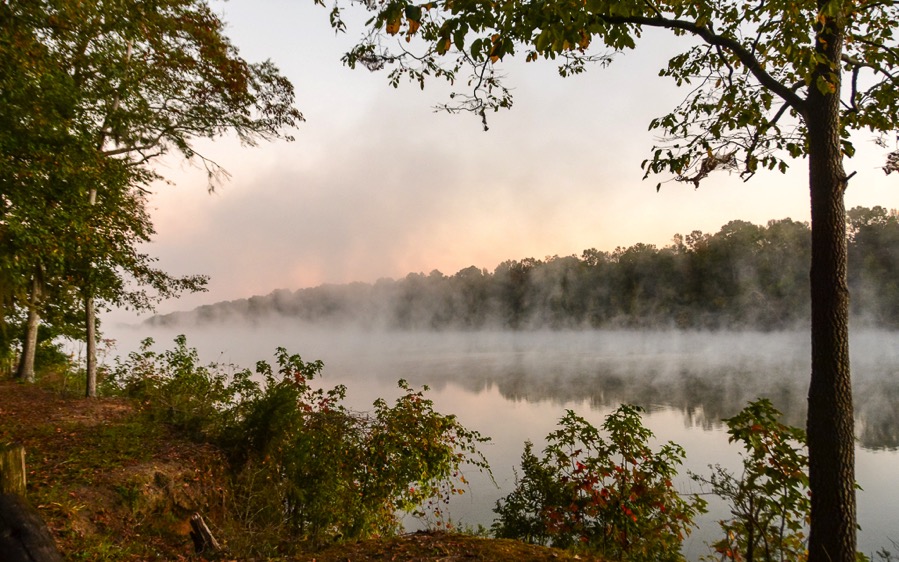 Nice afternoon reflection shot in the calm waters of Thompson’s Shoal…the name of this section of the river. There’s a lock and dam just downstream about a mile to the right of this shot. 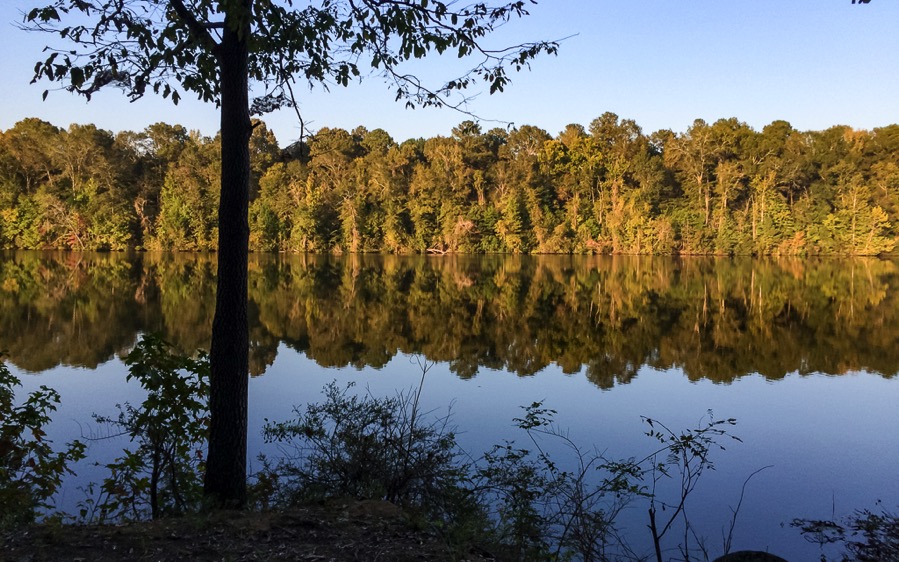 Tuesday we headed off to Sunflower AL…the LL&T as it’s known in the family owns about 5,000 or so acres there between US-43 and the Tombigbee River on both sides of Sunflower Road…it’s mostly pine forest with some hardwood areas over on the river. The land and timber are managed by Gulf Lumber (now known as ConFor) as a renewable resource with a sustainable level of cutting. Makes us a few bucks every year.

We only had some vague descriptions of the property location from Neil’s brother Ron so drove around a bit. Along the way we ran into the on-site manager for the Bull Pen Hunting Club which leases most of the land for hunting purposes only. He passed us on one of the dirt roads as we were wandering around and quickly turned around to see just who the heck we were. Once Neil introduced ourselves he pointed us in the right direction for the property and headed off. Here are a few shots we got along the way.

Monument about the salt works back in the 1860s…this was before Neil’s ancestors bought the land after coming south.

The original Laubenthal homestead…not sure who actually lived here back in the day…it was occupied by Neil’s Uncle Junior (real name George Jr.) back in the 60s and early 70s…he was the onsite manager for the company back then. After he passed the corporation engaged Gulf Lumber for future management operations.

Some of our lumber on the hoof…or truck as it were. This has been harvested and will be trucked off to the plant…can’t tell whether it’s destined for lumber or telephone poles but probably lumber since the trunks aren’t straight like poles need to be.

An example of the modern timber management practices used by ConFor; as you can see the trees are planted in nice rows which means that this area has been previously harvested and replanted about 20something years ago. When timber is harvested it’s done in narrow strips like this rather than clear cutting large swaths…this is better for the wildlife which lives on the land, enhances regrowth, minimizes the possibility of fire damage and cuts a sustainable amount of timber per year.

After our visit to Sunflower we went home and Neil grilled a steak for dinner. Wednesday morning we headed off for Foley AL and passed through downtown Mobile on the way. Some 140 miles later we pulled into the Foley Elks Lodge where we paid a whopping $155 for a 9 day stay with full hookup 50 amp power. We were originally going to stay in Coffeeville until Friday morning but the spring cartridge in our toilet broke last Saturday and while it still works it only sort of operates correctly to open and close the flush valve. Since we weren’t sure how hard the repair would be and/or how long the parts would take to come in we decided to head for Foley 2 days earlier…this would allow us to be in a big enough town to get it fixed. After parking and setup…we got an appointment with Nathan from Peterson’s RV Repair who came by…he just left to go and either get parts from the shop or order them but the repair is pretty simple he said and if he has to order parts he will be back Friday or Monday to install them.

We had some cheese pasta for dinner last night as our tummies were acting up a bit and Neil took out some chicken thighs for tonight. We’ll run up to the lodge bar afterwards and have a brewski or two I’m thinking.