Another Week In The Books

Saturday dawned pretty chilly here…down into the lower 40s when we got up and we had to turn on our furnace for a little while to get the house warm. After coffee and breakfast it warmed up pretty quickly and by 1100 it had gotten into the upper 60s on the way to lower 70s for a high temperature. Neil headed out on another ride…15.78 miles, 15.08 mph, 1:02:47. It was (again) a pretty windy day so he did the Echo Loop to the east and then turned north a mile or so on US-31…really windy going that way…before heading back south and then west for home. Going south (all of 3 miles maybe of the total ride) was downwind but while it was a crosswind at least it was slightly abaft of the beam on the leg back westward towards home.

Getting back about 1230 he had a shower and by the time Connie was done with her Ladies of the Elks Secretary work and wanted to eat it was going on 1430…Neil declared that it was past lunchtime and we proceeded directly to Afternoon Snack…a bag of chips. About 1645 we headed out to Hogbody’s for dinner…had some of their excellent ribs before coming home. The movie in the park was “The Martian” which he wanted to see and she didn’t…so he went and she stayed home and watched some recorded TV shows that he doesn’t think much of. Getting home  about 2230 we watched some more recorded TV that both of them like before bedtime…another cool night in the forecast although only high 40s so not quite as bad as Friday night was.

Sunday was just a bike ride day…about 15 miles in about 56 minutes…his GPS track didn’t work on the iPhone so he had to estimate it.

Monday and Tuesday were pretty much workdays for Connie…although we did go down to the Elks for fried chicken Monday and Bingo on Tuesday…Mindy the cook comped our dinner since we missed out 2 Friday’s back and Neil got both pitchers of beer free for schlepping a keg 2 different times…so our dinner cost us a grand total of $2.50 for a Captain Morgan’s Rum and ginger ale and $5.00 for the tip. Tuesday Connie won a quarter pot so picked up $13 in winnings…but spent $22 on cards…so it was a net negative for her entertainment for the evening. We skipped the hotdogs this week and had a couple of frozen pizzas for dinner.

While Connie was working Neil cleaned our ventilation fans out…took the screens and fan blades down and scrubbed them…he still needs to get on the roof to do the inside of the covers as they’re pretty grungy too but will do that Thursday morning before it gets hot. Tuesday afternoon was Computer Club in the park for Neil…he and Tom fixed 3 problems for folks this week and Connie had choir practice before pizza and bingo.

Wednesday she was back to work…so he went on a bike ride before it got too hot…19 miles, 16.23 mph, and 1:10:04. He did see some young yuppies out on a group ride and rode with them for 3/4 of a mile or so when their route was the same as his…but they turned off as he headed north onto the Pritchett Loop extended. Wind was a lot less than earlier in the week but was still 10-12 mph from the west/northwest so at least it was (mostly) downwind on the way back.

Thursday was even more work for Connie…I’m starting to see a pattern here…with Bingo for her in the evening while Neil went down to the Lodge for the monthly meeting…our friend Jeff is applying for membership and went down to make sure he was voted in. They did head over to Hoolihan’s Irish Pub for some pints of Guinness and Kilkenny Ale and some dinner before the meeting…potato leek soup for Connie and shrimp and grits for Neil. Hoolihan’s is right next to the Nauti Parrot…and has been there the whole time but we just never saw it. We’ve not found another Irish Pub here in Fort Myers to frequent because our initial search way back when didn’t reveal any that were close…but this one is just about 3 miles past the Elks so is easy to get to.

Friday Neil woke up feeling not so well…stomach felt off all day until about 1600…turns out Connie had felt the same way on Thursday so she probably had something and then passed  it along to him. He headed off  early to the local Mazda dealer…our Mazda 6 has the recall for the faulty airbag initiator…and they finally have parts available. However…they broke the airbag connector while installing the driver’s side one so it’s not drivable until they get the parts next week…but they gave us a gratis Hertz rental…a mighty Kia something or other…it’s about the size of a roller skate. After he got back from that we had lunch and he went on a bike ride despite feeling poorly…did the Pritchett Loop 12.37 miles, 16.21 mph, 45:47 but at least it was partially downwind on the way back home. After that we headed off to the Elks…we were not due to work this week and had planned on staying in and making sous vide halibut using a filet we brought back from Alaska and the sour cream/mayo/wasabi sauce we stole the recipe from Linda for…but Patti called Thursday and asked us to work as she needed a cashier. By the time we started taking money she had talked us into working Monday the 14th as well in addition to what we had already signed up before…which means that starting Saturday we’ll be at the Lodge for one reason or another 7 out of the next 14 days…only 2 of the 7 don’t include dinner so he won’t be cooking much I guess. We’ve also taken a look at our remaining time here and put all the pubs/restaurants we want to revisit on the social calendar…and let’s just say it’s mighty full with 19 of our remaining  41 days having something scheduled and that doesn’t include whatever nights we volunteer for at the Elks in April.

Today is Saturday and we’re off this afternoon for the Elks Volunteer Appreciation Dinner…it starts at 1600 and includes Happy Hour and dinner (last year it was steak and I imagine it will be that again as it definitely won’t be chicken or fish)…with open bar so ya can’t really complain about that.

OK, let me give ya a couple funnies and go ahead and post this before Neil goes out to regenerate our water softener…sounds thrilling eh?

Since it’s still flu season…I figured ya ought to know how the Irish vaccinate themselves. 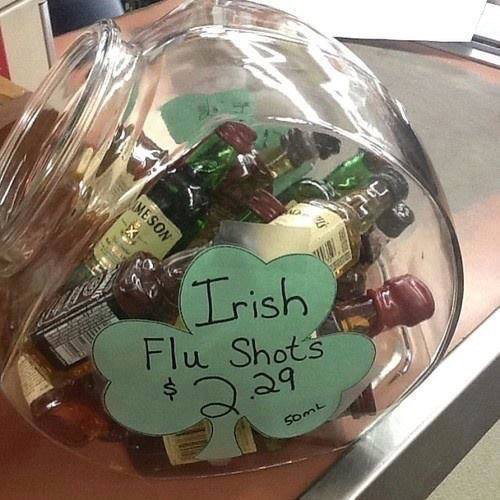 And it’s important to let your wine breathe before ya drink it ya know.

In the interests of a greener environment you should always, always recycle.

And finally…as you know we only drink good beer around our house…Guinness on tap if it’s available but otherwise the darkest stuff we can find on tap…and we don’t drink Bud Lite at all under any circumstances…this is how they make it so now you know why we don’t. 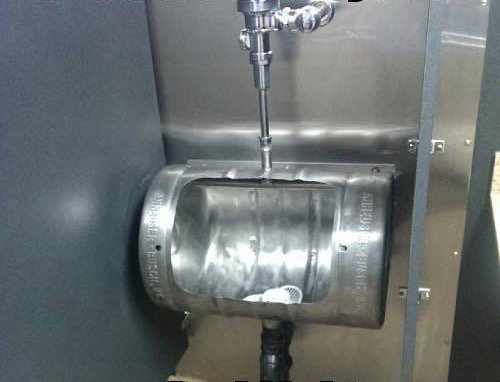 1 Response to Another Week In The Books