Well…we headed out early Wednesday morning August 10 on our 292 mile trip from Benton IL over to Georgetown KY which is just north of Lexington. We dumped and hitched, fixed (at least temporarily) our power cord problem, made a short jaunt north on I-57 to I-64 and then stayed on 64 all the way to just before Lexington…getting off on the northwest side of town right before we started to get into their rush hour traffic and headed north a dozen miles before arriving at Whispering Hills RV Park in Georgetown and getting settled into site 61 which is a nice 50 amp FHU site on the fishing lake. We were scheduled for a week.

Our problem with our power cord is that we discovered the power reel for pulling in then cord no longer reels…it runs for a few seconds and then quits…and is running very slowly when it does run. Since it’s a DC motor it might be just low voltage due to switch corrosion…or it could also be the built in overheat mechanism in the motor. Neil talked to the folks at New Horizons and they’ve had to replace the switch a decent number of times for similar issues…so we ordered a new switch to be sent to Florida and we’ll just live with it until then. The workaround is that instead of using our built in power cord we just pull out a foot or so and plug in our 50 amp extension cord to run to the pedestal…the extension cord is easy to just coil up and toss in the basement. We actually discovered the problem on departure from Benton and for the short term just pulled the cord completely out to it’s max length, coiled it up and bungee corded it to our ladder on the rear, and bungeed it up to the frame and trailer hitch to keep it off the street as we drove. On arrival here Neil figured out how to manually coil it up by turning the cable reel through a couple of skinny openings…he had tried that in Benton but was unable to do so with the weight of the cable pulling against him. He figured out a different way to contort himself and get both hands into the mechanism, Connie held up the cable to assist with the weight and feed it into the reel and in 10 minutes or so he was able  to get it reeled in and the extension installed.

Dinner on our arrival was at Ruby Tuesday’s…we tried this place in town but it turned out to be a highfalutin’ foodie place and not the bar we thought it would be so Ruby’s was our second choice.

Other than that…we’ve just pretty much done not a lot. We did head out Friday and did the tour over at the Wild Turkey distillery in nearby Lawrenceburg…and tried to do the one at Woodford Reserve distillery in Versailles after our lunch at the Inn in Vesailles…but again skipped it as we walked in the door and immediately were turned off by the corporate nature of the place…we sort of figured out due to the maxed out parking lot that it wasn’t gonna be anything but a cattle call type thing so we headed home instead.

Tuesday we headed over to Keenland Racetrack…which is a horse racing facility in Lexington…for their morning tour…we figured that if you’re in Kentucky you ought to at least see bourbon and horses so we did. We skipped another tour at a retired thoroughbred facility…it was $30something apiece to get in…figuring that $8 apiece at Keenland was really enough for us anyway as we aren’t really horse people. We spent a nice hour and a half getting taken around by our guide telling us about the history of the track and the activities that go on there. Keenland has 2 3 week racing calendars in the spring and fall but is primarily used as a training track and auction facility. They have the largest thoroughbred horse auctions in the world…running a total of 3 sales per year…each lasts about 2 weeks and auctions off somewhere around 4,500 horses bringing in over $500 million a year. We also found that Versailles KY is not pronounced vur-sigh like the French palace but vur-sales instead. Strange…just strange.

A little known fact…although there are many types of horses that run in races…Pinto, Arabian, Quarterhorses, etc…most races are limited to thoroughbred horses. Every thoroughbred in the entire world of horse racing (63 countries) is descended from Arabian stallions that were brought over to England to mate with native mares in the late 1600s and early 1700s. Somewhere around 160 bloodlines have been identified but about 95% (depending on who you believe) descent from 3 Arabian stallions named Byerly Turk, Darley Arabian, and Godolphin Arabian.

A few shots from our trips.

Our Wild Turkey samples before we…er, sampled them. 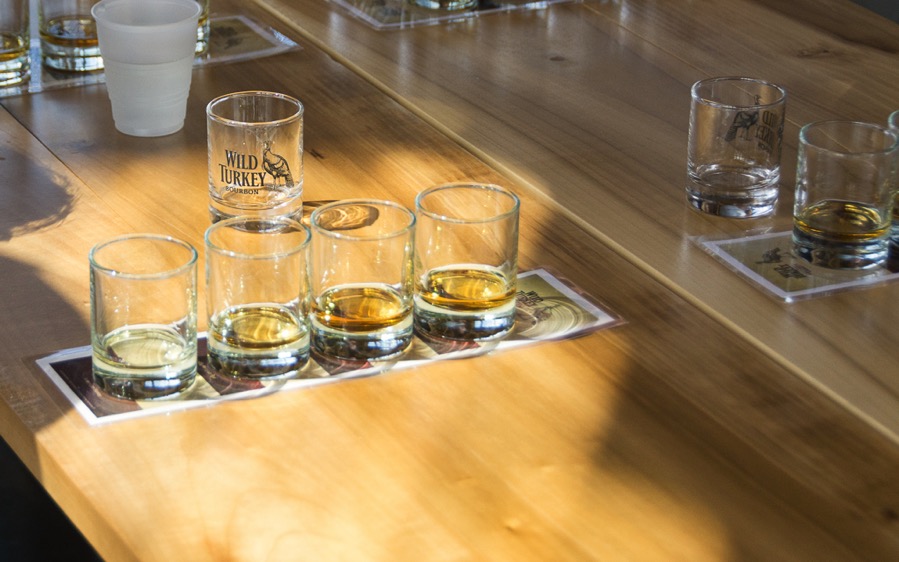 A view from the distillery towards the Kentucky River. The railroad trestle in the background is about 300 feet high and is now used solely for bungee jumping…with a dip into the river as an optional fee added experience. The vehicle bridge below it is next to the railroad bridge and is (according to our tour guide Bubba…yeah, that was his actual name) one of only 2 S-shaped bridges in the US. To us…it looked pretty much like a straight bridge across the river with a curve at each end so the road could continue climbing up the ridge. I guess the curves were actually bridges and not a fixed road on the ground…so maybe the claim is true.

A shot of one of the horses exercising on the track…we always thought that a racetrack was just a cleared dirt area…but the track is actually a sandwich of materials totaling about 3 feet in thickness…gravel, special dirt and some other layers in there. Makes a real funny sound when the hooves hit the dirt.

Alarm clock designed by Satan. When it goes off the three geometric pieces on top fly all over the room and you have to collect them and return them to their appropriately shaped hole before it will shut off.

I always wondered about this one. Everybody’s seen the space shuttle’s main engines…but you can only see the exhaust nozzles of course. The narrowest point is the point at which the velocity of the exhaust becomes supersonic. The SSMEs…as you know…burn a mixture of liquid hydrogen and liquid oxygen…some of which is pumped through the pipes around the nozzles to carry away heat and keep them from melting. What I wondered about was how the gases got into the engine. Turns out the pipe goes to this thing called an injector at the top of the engine…this is one of the injectors being machined.

And finally…a throwback for ya’ to the grand old days of 2014 when we went over to Ireland. There were a whole series of religious statues we found that resembled other things…you surely remember them from back then…Dead Ball Jesus, First Down Jesus, TV Timeout Jesus, Touchdown Jesus, and my personal favorite Fourth and Short Mary. Well…we wuz watching the Olympics the other day…and after all of the finger wagging in the pool, grousing about how your Olympics were ruined by being accused of previous doping, and sour loser complaints from he US Women’s Soccer team goalie…not to mention the couches in the rowing venue and armed robberies by guys posing as policeman…anyway this one seemed perfectly apropos for the entire week.

I present to you…Unsportsmanlike Conduct Jesus.

My favorite moment of the games so far has been the Women’s 400 meter final…the US runner was just beaten out at the line by a runner who literally dove forward onto the track…this allowed her to reach the line first by carefully timing the dive. Perfectly legal…as the only rule is that the torso that reaches the line first is the winner. Second favorite moments were Michael Phelps and Usain Bolt…those guys just ain’t human. Bolt seems like the only guy at the track who is actually having fun while he’s doing his job…and Phelps has to have had a mermaid ancestor along the line somewhere.

Tomorrow we’re off to Heiskell TN just north of Knoxvegas where we’ll visit Neil’s baby sister MJ for a day before heading onwards to Columbia SC.