Well…we kept an eye on the storm formerly known as Invest 99-L and now known as Tropical Storm (and then Hurricane) Hermine and as Neil expected it would based on long observation of storms in the Gulf while he was growing up…it headed farther north and was due to make landfall Thursday afternoon up at the eastern end of the Florida panhandle. Our planned route was down 95 to Daytona Beach then South-Southwest through Orlando and then South on US-17 and FL-31 from just west of Orlando.

We got hitched up and were on the road by 0830 or so…no rain to speak of before we left and relatively little wind. We had considered as a storm evasion tactic that we might continue on down I-95 it the weather or traffic around Orlando was bad and head west at Fort Pierce. Weather looked fine and traffic was fine so we continued with our planned route. Turns out that if we had continued on southwards we would have been pretty near to Cape Canaveral just about the time the SpaceX rocket blew up…or as Elon Musk put it later…caught fire…although it sure looked like it blew up to us. Maybe it was just a really, really fast fire. Technically he was right…it was not an explosion as that results in more rapid oxidation of the ‘stuff that goes bang’ with wave fronts propagating at many, many thousands of feet per second. Looking at the video…it really was just a really energetic fire. The Falcon 9 uses liquid oxygen for the oxidizer and highly refined kerosene for the fuel. According to the reports we’ve seen the fire started in the region of the second stage oxygen tank. For those of you who don’t really know about liquid oxygen…literally anything will burn if you dump liquid oxygen on it…even a big lump of metal like an anvil that a blacksmith uses. Dump a gallon of LOX on one of those that has a couple of glowing charcoal briquets on it and in about 15 seconds the anvil…all 100 pounds or so of it…will be gone. You can find plenty of videos on the internet of things like anvils, picnic ground BBQ grills and other non flammable objects catching on fire with treated with LOX. Neil can tell you stories about pictures he’s seen of oxygen files on submarines…and it ain’t pretty. Anyway…what most likely happened was that there was some sort of leakage from the oxygen tank while filling it…that was in progress when the problem happened. Leakage would have started a fire in the rocket’s structure that would spread rapidly…like in milliseconds. Wouldn’t take long for the fuel tank to be breached and then the whole thing goes up. Neil’s guess is that in the video the actual fire started about 2 seconds or so before the flame eruption and spent the intervening 2 seconds eating into the fuel tank. Once you see the actual fire on the video…it’s clearly a petroleum product fire as evidenced by the orange flames. Anyway…technically it wasn’t an explosion as that would happen much faster than what you see on the video. Back in the day…Neil was intimately involved in several…well, let’s just call them explosive projects. When you look at the video of actual explosion…the video is usually at 25,000 or 50,000 frames per second instead of the normal 32 or 40 frames per second that TV, movies, and internet video uses…and when you’re looking at those high speed videos the explosion wave typically travels 100 yards in a half dozen frames of video. Looking at the video of the SpaceX incident…it’s clear that the wave is traveling more on the order of 200 feet in a half dozen frames of video that’s running 800 times faster. So…technically Musk is right despite what it looks like although I’m sure that most non-techies would call it at explosion.

We ran into a little traffic going through Orlando…maybe 10 miles of construction barrels although we still were rolling along at 40…and maybe another 10 miles of sort of traffic but again we were still rolling along at 40-50. We briefly considered…when we were in the Orlando area…continuing on down I-4 to I-75 which was the GPS recommended route…but looking at the weather there were rain bands rolling into the Tampa area from Hermine and it looked like we would be better off taking 17/31 as we originally planned. So…we did…and ran into maybe 20 minutes total of rain before we got far enough south for it to stop…some of it was pretty heavy but we were still doing 40 or so down the 4 lane portion of US-17 during the rain and by the time we got to the 2 lane portions the weather had cleared enough where it was no longer raining as we had gotten enough south.

We rolled into Seminole about 1530…quickly checked in at the office and parked in our usual site 101. Really hot though. We did utilities and then had some frozen lasagna for dinner. Friday Neil did most of our winter setup…we’re going to be here for at least 7 weeks before our potential run up to Cedar Key for 10 days…and then we hit the Elks for fried fish dinner in the evening.

Saturday we watched Alabama…you know, the defending national champs…just trash USC 52-6. The commentators went on and on about Alabama’s lack of a quarterback and how they were starting a ‘rookie’…along with graphics showing how the last 4 rookie QBs for the Tide had performed in their first year…3 championships and one loss in the semifinals. The Tide’s defense was a typical suffocating ‘Bama defense holding USC to 6 points. The offense took a little longer to gell and nothing really happened until they pulled the starting QB at the beginning of the 2nd quarter and put in a true freshman named Jalen Hurts. This kid is looking pretty good…made a couple of freshman mistakes…but ended up with 2 long touchdown passes and 2 running touchdowns…between the beginning of the 2nd and midway into the 4th Bama hung 52 on them. They looked scary good…the D was in mid season form.

Nothing new beyond that…I’ll have another report later.

It’s a rough neighborhood when your shopping cart is up on blocks.

And store clerks really need to give clear instructions 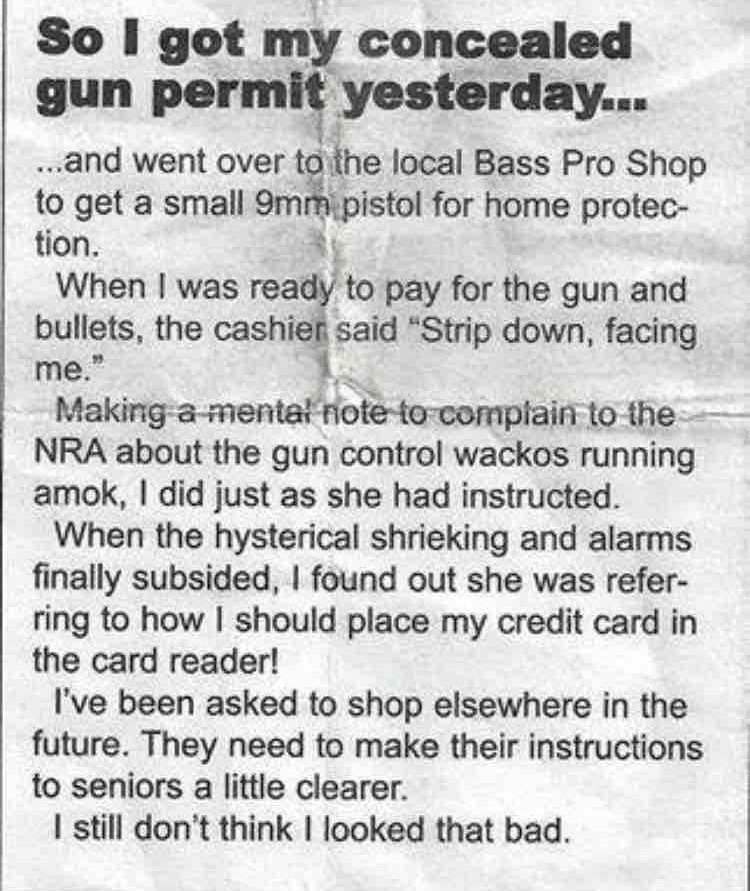