Ok…howsa ’bout some more Fun Stuff© for ya.

Thursday June 8 was dedicated to a day trip to Aspen CO…just becuz we never been dere…and then continuing onwards to the the ghost town at Independence CO east of Aspen and then another 3 miles past there to Independence Pass. Back when we were originally doing US Route 50 this summer…we had a side trip to Aspen on the menu and would have come up to Independence Pass from the south side on CO-82 but with the Jello shaking we would head up to the pass from the NW side on CO-82.

We headed out about 0910 for our trip…18 miles back east on I-70 then 50 south on CO-82 to Aspen and another 18 total from Aspen to the top of the pass later on. At the last minute…Connie found the ghost town so we decided to leave a little earlier than originally planned and do the pass and ghost town before lunch.

Heading east on 70…all was good but the troubles started when we got off onto CO-82…there was all sorts of construction in Glenwood Springs and it took us 30 minutes to go 3 miles from the freeway exit to the open road south of town. We persevered through that and were soon heading south on CO-82.

As we went we noticed something very strange on the road…at this point CO-82 is a 4 lane highway with speed limits between 45 and 65 depending on how close you are to one of the bedroom community turnoffs or traffic lights…here’s a shot looking out the windshield of Big Red. Don’t worry…Connie took the shot, not Neil who was driving. 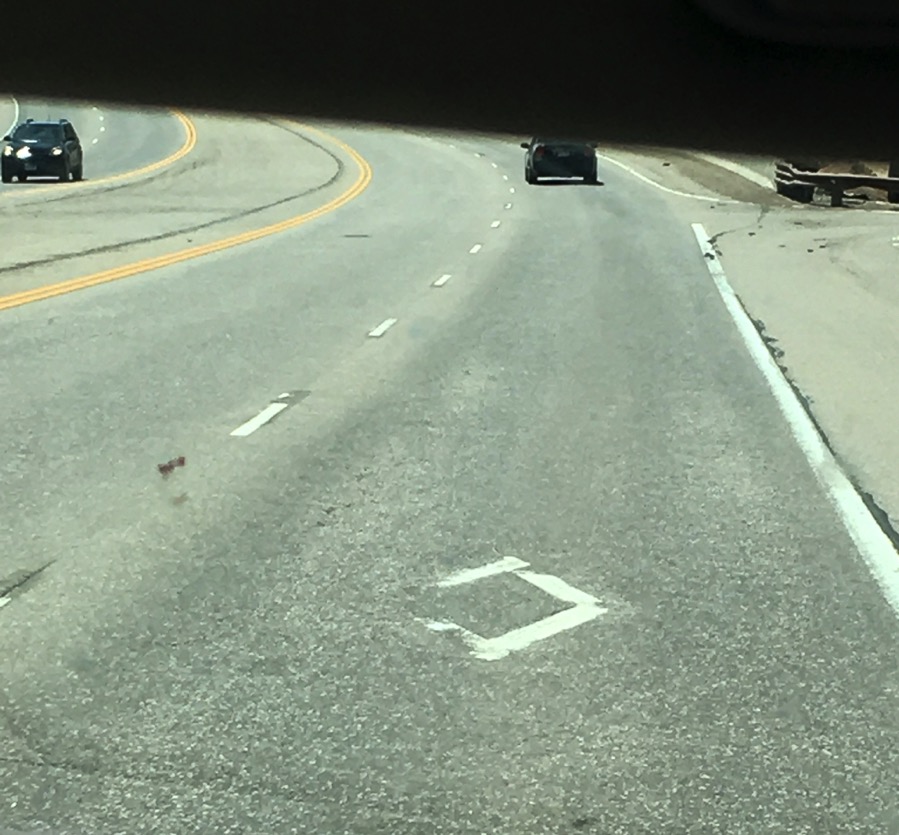 Yup…that’s a carpool lane HOV identification you see…and sure enough just a bit along we saw the sign saying “Right lane HOV and turns only”. Two things struck us as mighty strange about this. First off was why a small town like Aspen…this road only goes to Aspen…a town of less than 7,000 people at an elevation of around 8,000 feet…why the heck it needed a carpool lane. It pretty quickly dawned on us…as will become clear when I talk about our lunch later…that they needed a carpool lane because obviously nobody that worked in Aspen could possibly afford to live there. The second strange fact was this was the first carpool lane…of the hundreds we’ve seen on our travels…was the right hand lane instead of the left hand lane. Nonetheless…we met the criteria for HOV…at least we thought we did since it never really said whether you needed 2 or 3 people to qualify as HOV so we continued on.

Passing through downtown Aspen…which took all of 5 minutes at 1030 in the morning…we headed up to the pass and ghost town. 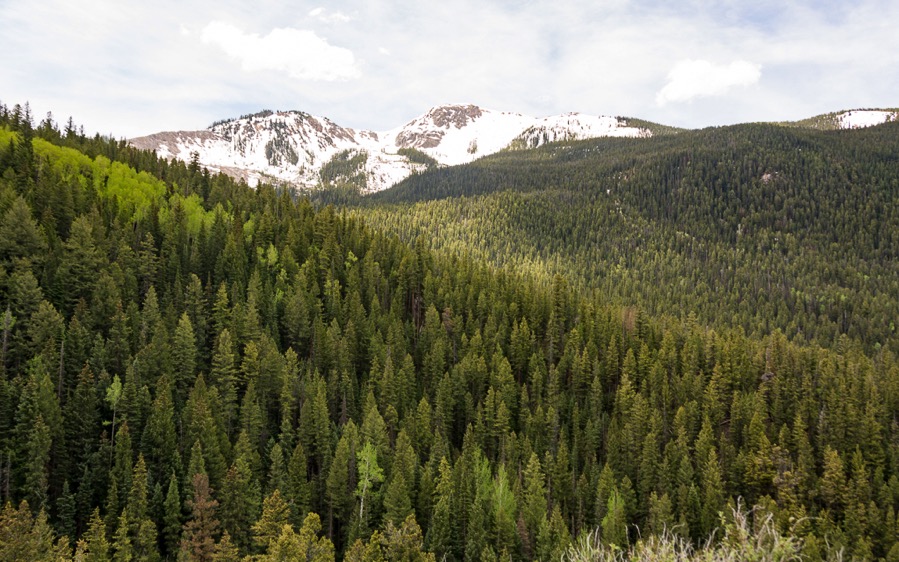 We quickly noticed…that Colorado has no damn air…and the higher you go the worse it gets. Here’s a shot of a little waterfall we stopped to take a shot of at about 9,800 feet and by the time we stopped, walked 15 feet to the edge to take the shot and back to Big Red we were panting like dogs.

We carefully watched for mile marker 58…which was where the tour guide said the ghost town was…and it just wasn’t there so we continued on to the pass. Here’s a panorama we stopped at about 10,000 feet on the way up…it covers about 150 degrees. The second shot was once we got above the snow line. 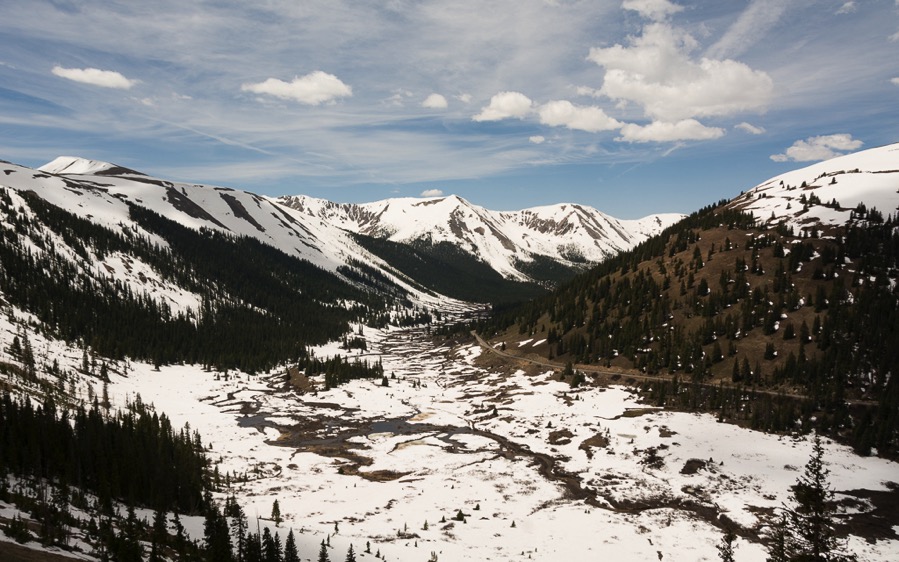 And then we got to the observation area at the top of Independence Pass. This pass tops out at 12,095 feet and is the highest pass in Colorado that has a through road on it. The only higher ones are Trail Ridge Road 88 feet higher in Rocky Mountain National Park near Denver and Cottonwood Pass 31 feet higher down near Gunnison but it’s only got a gravel road across it. You can see Mount Elbert from the pass but we weren’t able to figure out which one it was…suffice it to say there were a lot of tall peaks visible. Mount Elbert is Colorado’s highest peak and the second highest in the lower 48 at 14,440 feet.

We wandered around and took some photos…Neil took a short walk across the snow to a rocky high point for photos. His foot fell through the top of the snow at one point and I don’t know how deep it was but it was at least up to his shorts. Temperature at the top was 40-45 and at least half of the folks he saw walking across the snow to the viewpoint were in flip-flops.

And there he goes…he fell though just after this point.

I think this is Mount Elbert…at least the profile pretty much matches the one I found when I looked it up on wikipedia. 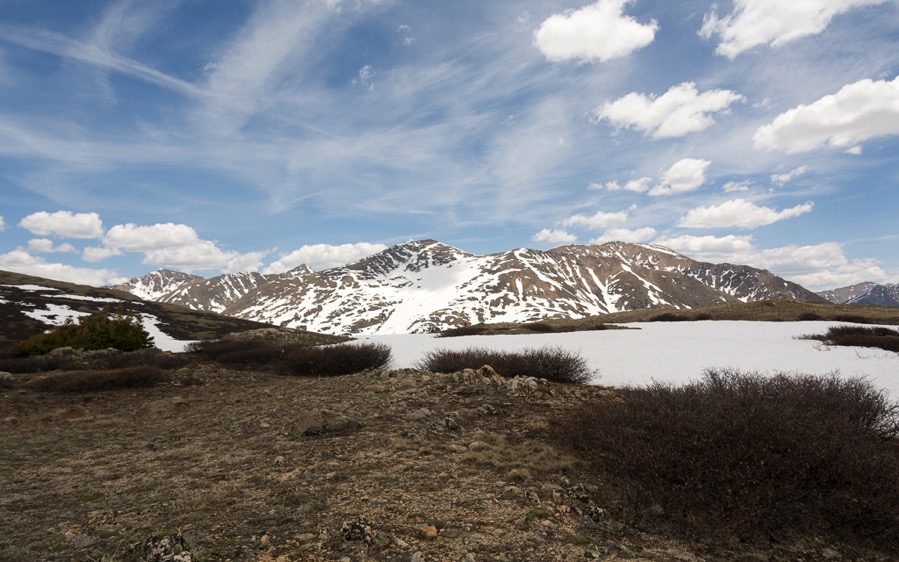 More shots from the pass. 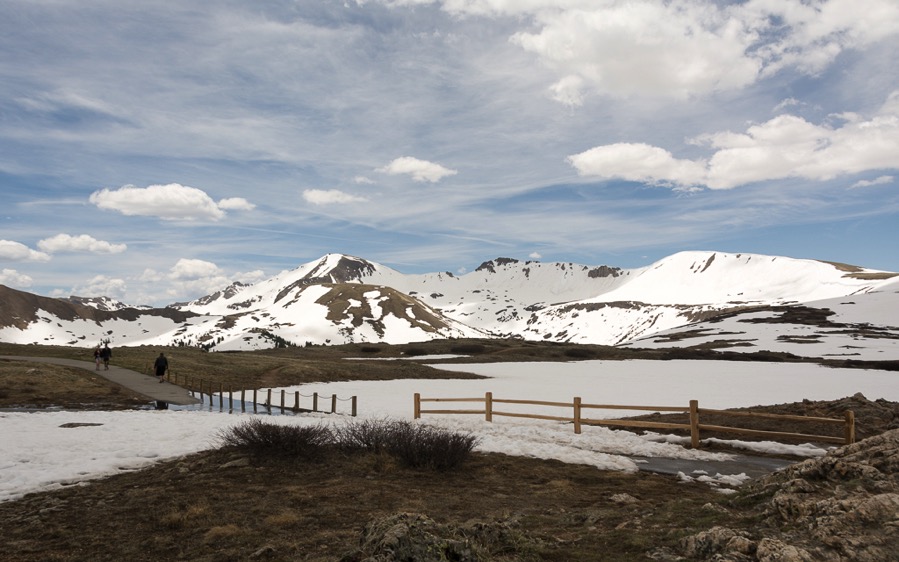 A nice middle aged lady from Arkansas took this one for us. Neil thought the Hawaiian shirt at the pass in 45ish weather was a nice fashion statement. 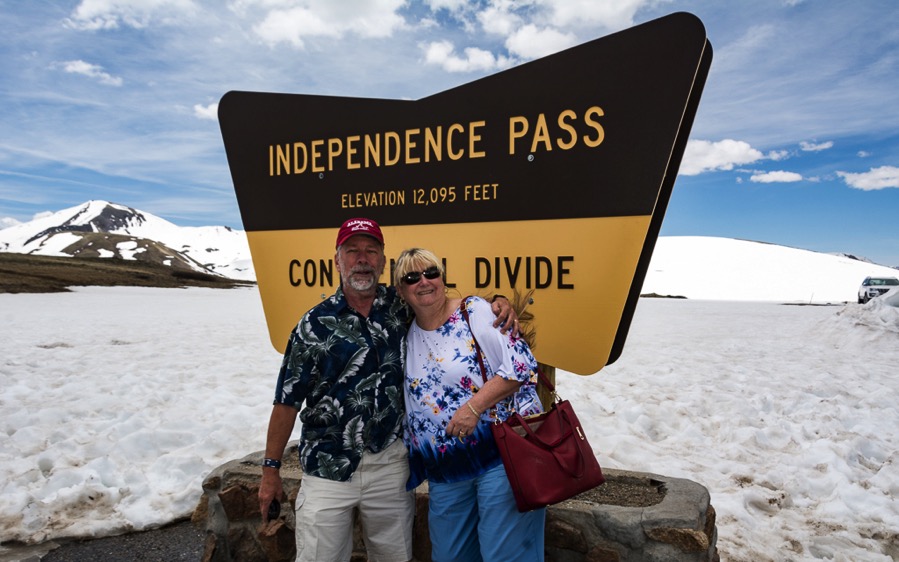 We headed back down the hill and stopped at this snow melt waterfall at the end of one of the valleys we saw on the way up.

Panorama looking the opposite direction from the waterfall above…looking down the valley facing roughly west. The road on the right of this shot heads down toward Aspen and after curving around behind where he took this shot from continues upward just out of the frame to the left almost to the ridge you can see then turns sharply around the ridge to the pass. You can just see the road at the upper left of the shot…it’s the line going up and to the right from the left edge of the shot just above those trees you can see.

On the way back down we found the ghost town…it was actually almost adjacent to mile marker 57 instead of 58…we decided it was too high in altitude to hike the 200 feet or so down to the cabins and then back up. 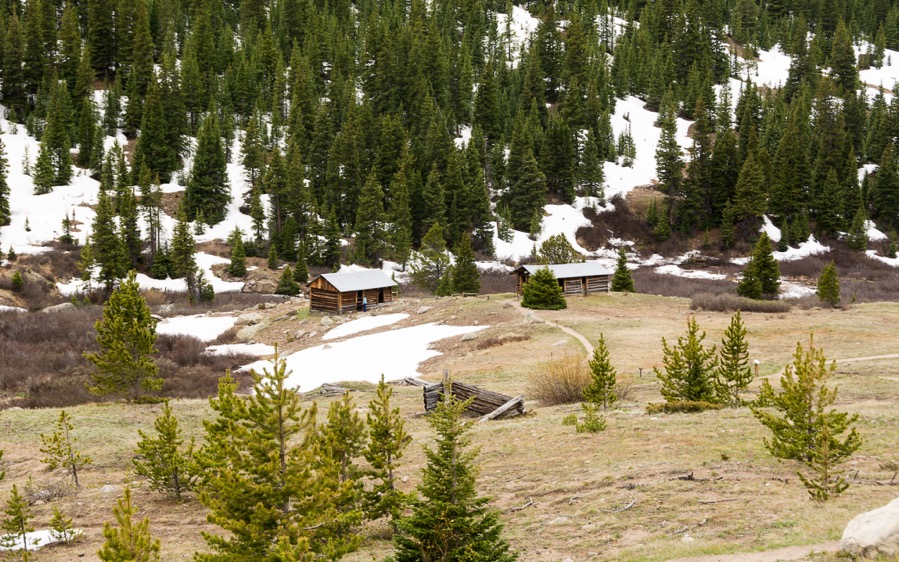 A few more shots on the way back down to Aspen.

With that we continued on down to Aspen as we were getting kinda hungry…well, at least Connie was but Neil was still pretty full from the eggs he made them for breakfast and the liter and a half of water they drank so far…it’s really dry up at altitude and keeping hydrated is the best way to avoid altitude sickness symptoms. Found a sweet parking place just a half block from our destination and even sweeter it was diagonal parking so Big Red fit into it perfectly. Cost us $5.25 at the credit card meter for 90 minutes which we figured would be plenty.

Our destination for the day…here’s the quiz part of the post. Take a look at the shot below which was our selected eatery and the quiz is…what’s the name of it? 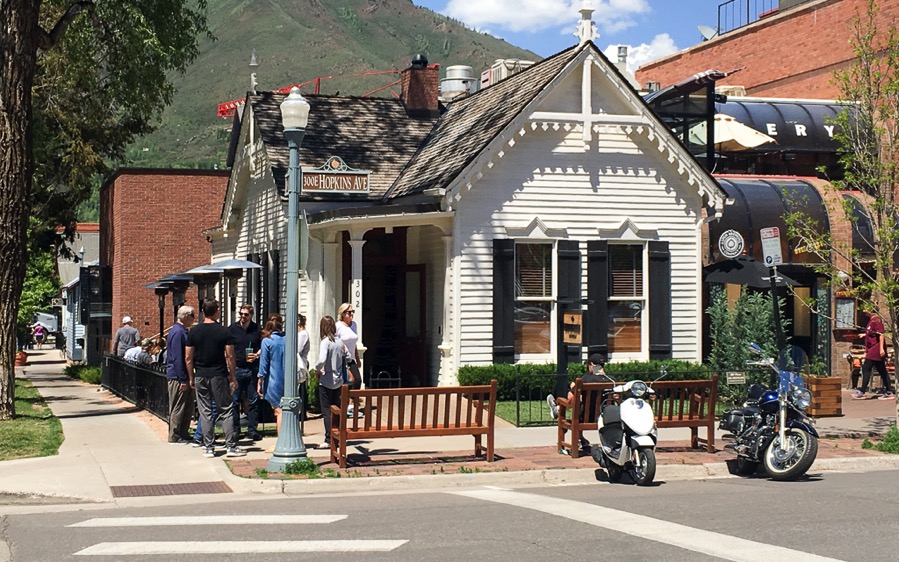 Give up yet? Obviously the name of the place is… 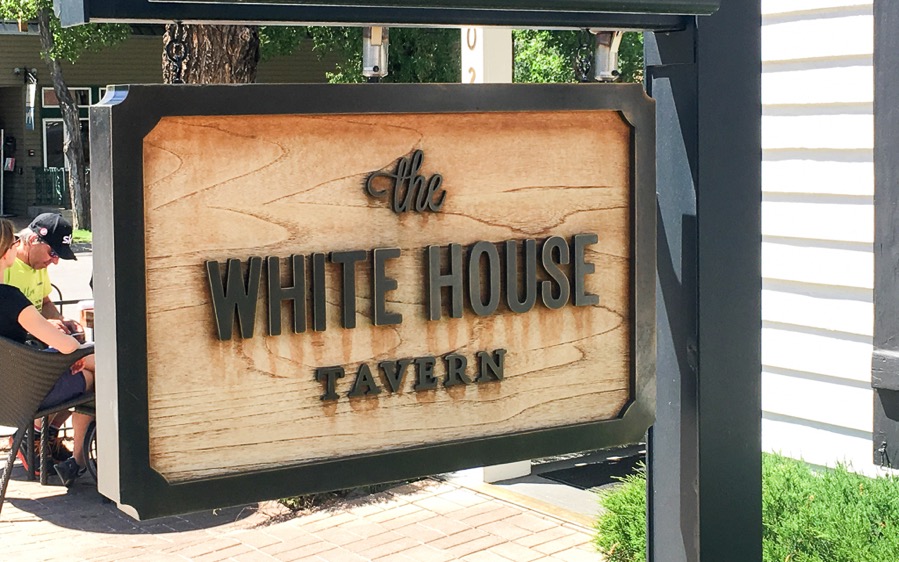 We found a couple of seats at the bar…outside patio tables were all full as were all the inside tables…but we would rather sit at the bar anyway because…of course…you meet a much better class of bum sitting at the bar. A quick discussion with bartender Tyler and we sampled a couple of brews before settling on 2 pints of 90 Shilling Scotch Ale from the Odell Brewing Company…a very nice malty Scotch Ale. To go along with it…Connie ordered a small Kale Salad and Neil…since he wasn’t too hungry…just selected an order of fries with dipping sauce…and when they showed up…I gotta tell you these were just about the best fries we’ve ever tasted. Here’s a shot…it used to be fuller. That’s Connie’s 90 Shilling on the left. To go along with the fries they served house made ketchup (pretty decent…but hey, it’s ketchup) and this house made mayo with Sriracha and herbs…outstanding stuff to stir your fries around in…and it kinda sneaks up on ya as after about 4 or 5 fries you notice it’s got a bit of a kick.

Our bill…for 2 beers and 2 appetizers…was $31.something which turned into $38 with tip…you can see what I mean about nobody who works in Aspen can afford to live there. After lunch we had 20 minutes left on our parking meter so we wandered into the meat and cheese store across the street for a looksee…they had fresh Ahi Tuna for $37 a pound and local made cheese for $21 a pound…we passed on both of those although they did really look good. We headed back for the car and noticed this mural across the road from our parking spot on the side of a building…pretty neat looking…kind of a half woman, half cat thing. 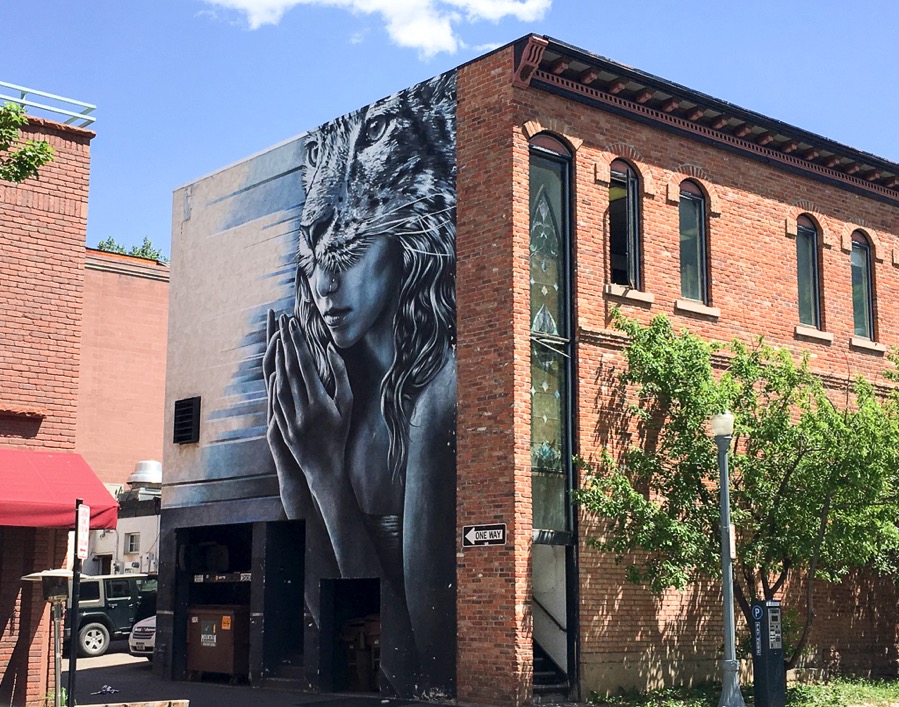 On the way back to the campground…we discovered that the city of Glenwood Springs has absolutely, positively no clue about urban planning. Before we left Aspen…we looked at the map to see if there was a way to another freeway exit than where we got off before so as to avoid the construction gaggle in downtown. A few minutes looking and we figured we could turn west at 27th street a bit south of town, cross the river and turn north on Midland which would take us to the next interchange with I-70 to the west…so we plugged that into the GPS and headed north. Things went well and we turned off of CO-82 just before the construction backup started and headed north along the western side of the river on Midland until we got about a mile from the freeway and came to a complete stop. Tried another alternate route with pretty much no success and sat there for 30 minutes before things finally started moving. Turns out there was another construction project on our alternate route…but at least it turned out to be just repaving with a flagman alternately letting the two directions of travel go. Got through that…finally…and then after another 15 minutes to get through the two jammed up traffic circles to get to the freeway entrance. Once we got there it was speed limit sailing the 18 miles west to the Silt exit.

Dinner was leftover Mac’n’Cheese from Connie’s dinner at the Miners Claim restaurant we ate at last night. We were originally going to have our Mexican leftovers from Tequila’s in Goodland KS…but Neil instead picked this local place here in Silt named Miners Claim. No draft brews but Connie had a Fat Tire and Neil a Coors Original Banquet…we are in Colorado after all…along with Mac’n’Cheese for Connie (which was enough to feed her last night and both of us tonight) while Neil had some Peel’n’Eat shrimp and a Kobe beef slider…which while it obviously wasn’t real Kobe beef for the $5 price was excellent with crunchy fried onions and chewy bacon with some spicy mayo aioli.

Tomorrow we’re off to Rifle Falls about 10 miles to the west and then Saturday we’ll be off to Moab.

This guy was christened on the internet as Waterslide Jesus…sort of a play on words for the Jesus Lizard of South America. Video clip here. I really liked how he glides across the pool and steps right up on the side…but I wonder how many times it took him to figure out how to do it. If you don’t know what a Jesus Lizard is…I’ll see if I can find a video for ya next time…

This fits Neil to a T.

As does this…after all…both Neil and Connie were the remote at one time in our lives. 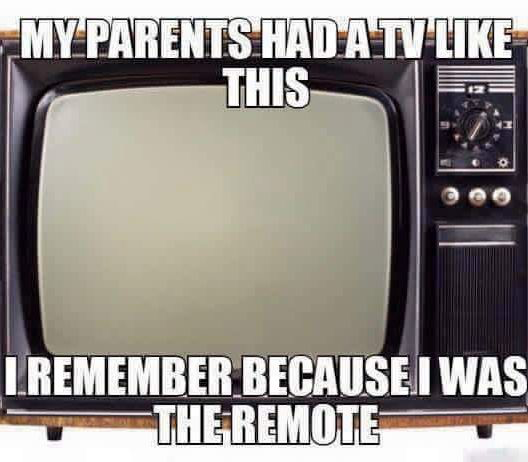