Been Way Busy These Past Two Weeks

Wow…two weeks sine my last post…but I got my reasons…of course I do. They might not be good reasons…although I think they are…but it is what it is like I always say.

When last we left our heroes they had completed their scheduled time at Yellowstone and Grand Tetons NPs and were heading off to Spearfish SD for the NHOG rally…when they arrived there were 43 couples that either owned a New Horizons already or were contemplating a purchase…there were 3 of those (I think) included in the 43.

From our arrival at the rally until today we’ve been going pretty much flat out…and it ain’t getting any better for the next 9 days. First up was the 5 days at the rally…with seminars all day, happy hours and dinner in the evenings, and various other social activities. Once the rally was over…we headed south with our friends Bill and Linda Napier for 4 days at Rocky Mountain NP right outside of Denver then continued on south to Colorado Springs where we’ll be for another 4 days…just arrived there today…and then we’ll be heading another 350 miles south to Albuquerque NM for the Balloon Festival. Linda and Neil are alternating cooking days…at least for those when we’re not out at the pub…with a lot of wine, Fun Stuff© planning with the girls, and naturally the actual accomplishment of the Fun Stuff©.

We’ve had really concentrated fun the past 2 weeks…almost what we would call “vacation mode”…and will continue to have fun for awhile longer as we visit things here in Colorado Springs and then head on down to the Balloon Rally with Bill and Linda.

We had some rain both up at the rally and last week in the Denver area…along with a bit of snow up at the higher elevations when we were up there. We weren’t able to drive across Trail Ridge Road as we had planned…it was closed due to snow, ice, and lack of visibility just about every day. Down here at Colorado Springs…it’s a bit warmer and it appears that we’ll have less rain than we did last week.

Bama is continuing to roll along through their season and is 5-0. They opened their SEC season at Vanderbilt last week…in the week before the game one of the Vandy defensive backs got a little cocky as Vandy was 3-0 for the first time since Eisenhower or something like that. Anyway…he said during a live interview “Bama, you’re next.”…tossing it down as a challenge. Bama’s QB was asked about the quote the next day and he responded “Well, technically he’s correct.” The game started and I guess the the Bama players were just a little bit ticked about that comment so they administered a 59-0 beatdown. Next up on the schedule was Ole Miss…they’re operating under an interim coach as their coach got fired for arranging for some strippers on his college issued phone and the one before him was fired for recruiting violations. Anyway…the interim coach specified repeatedly in his press conference that in no way was anybody associated with the Ole Miss program saying anything like what the Vandy idiot said…he actually called the guy an idiot during his press conference…but it did them no good. Another beatdown…66-3 this time but it was 45-3 after the first possession of the second half and we called off the dogs. Nine touchdowns by nine different players…and they played the entire depth chart at running back all the way down to #8…#7 is a senior who scored his first collegiate touchdown and the entire team ran down to the end zone to congratulate him…he’s apparently a pretty popular guy in the locker room and even the starters were obviously happy for him. Next up is the Aggies of Texas A&M this Saturday…although they’re 4-1 they’ve barely beaten a couple of teams so I’m looking for another beat down hopefully…but I’ll be happy to settle for the W. We’re playing our typical Bama ball…defense and run the ball and that’s gonna result in a lot of success.

On to some photos…didn’t take any at the rally. After the rally we headed south…stopping overnight at Glendo WY then continuing on down to Boyd Lake State Park in Loveland CO just north of Denver.

Our first day there we drove into Rocky Mountain NP through the east entrance from Estes Park CO and headed up Trail Ridge Road…at least as far as we could go before it was closed due to snow/ice/visibility…we got up to almost 11,000 feet elevation but did not reach the highest point on the road at 12,000something.

Just past the visitor center we spotted this bull elk and his harem. There was another harem a quarter mile or so to the left from this one…and both bulls were on guard on the fringes of his harem towards the potential rival…they alternated bugling at each other although at the distance they were apart they were likely just warnings and not a challenge to a duel. 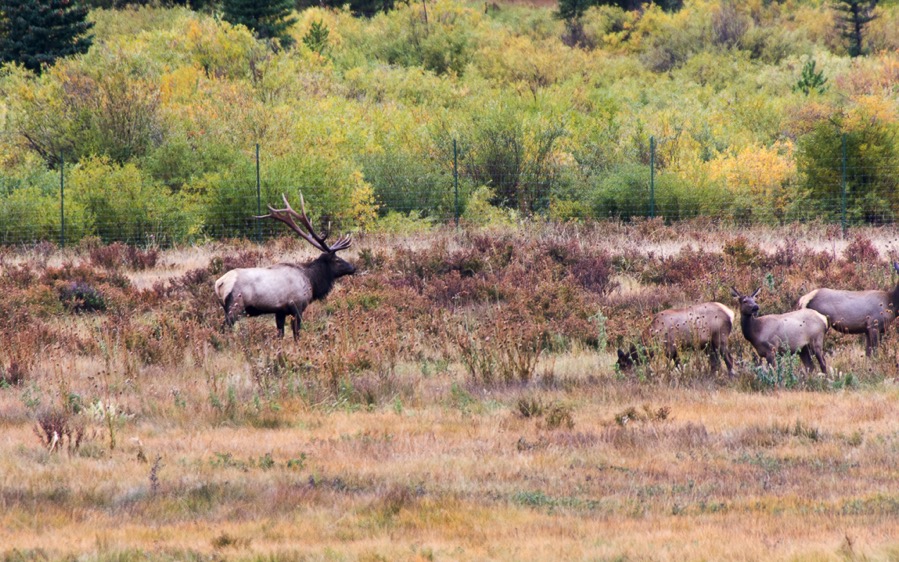 Continuing on upward we stopped and Connie got this shot of a stream right outside the picnic area we stopped at. 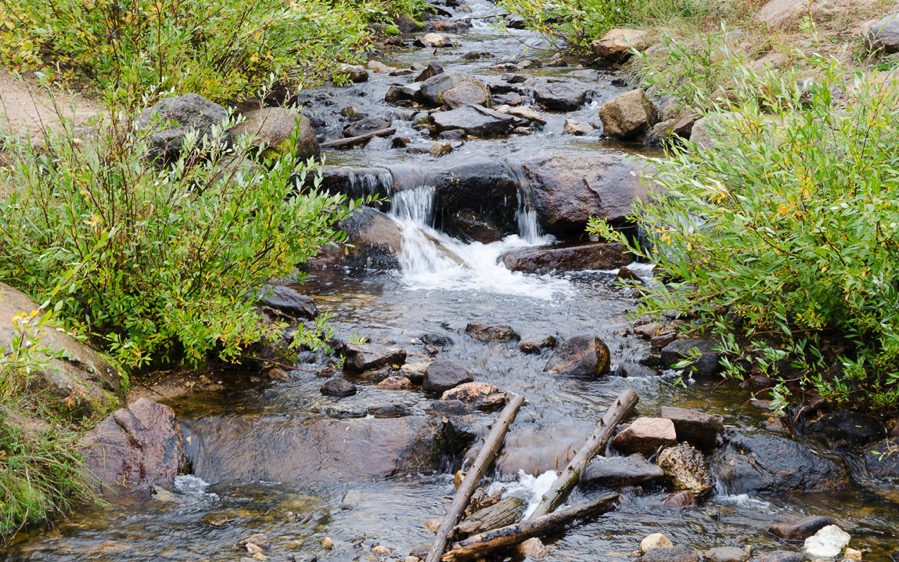 At Rainbow Curve…as far as we got westward on Trail Ridge Road…snowing as you can see and about 30 degrees. 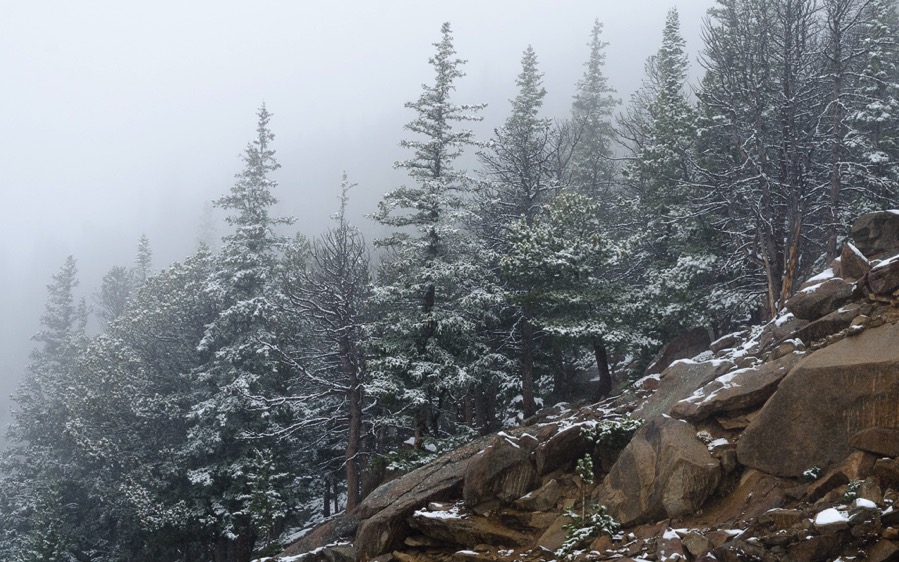 Stopped at an overlook for lunch on the way down from Rainbow Curve…a nice moody shot of the clouds drifting into the valley below. Had to eat lunch in the truck as it was drizzling by this time. 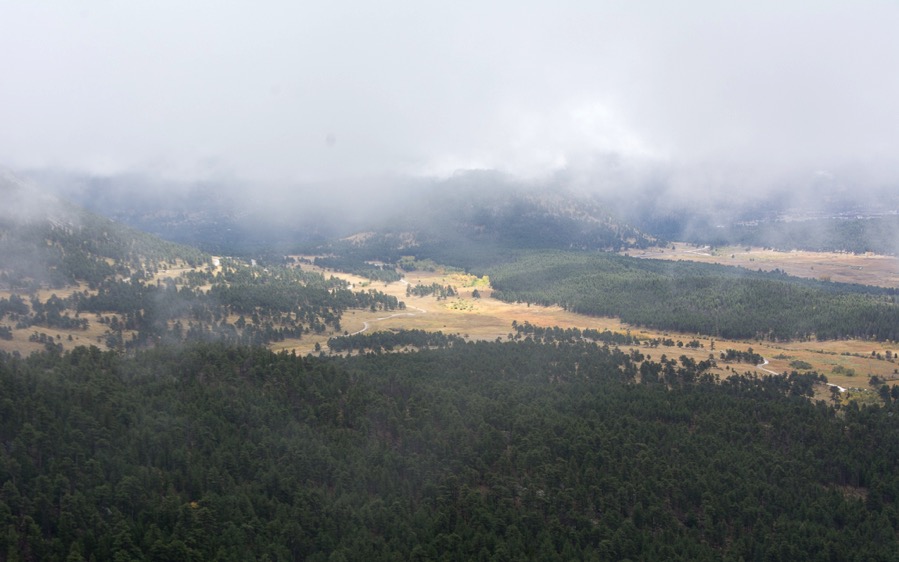 Instead of heading straight back to Estes Park on US-34…we continued southward on US-36 where it branched off and left the park through the Beaver Meadows entrance south of that town…we still ended up going back through town as 36 eventually rejoins 34 in beautiful downtown…not…Estes Park before continuing east back to Loveland and home. 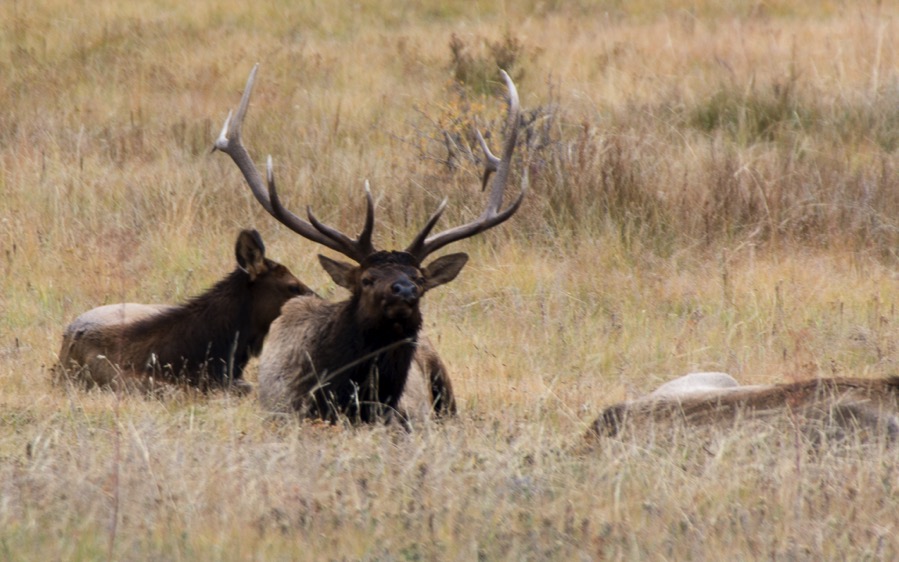 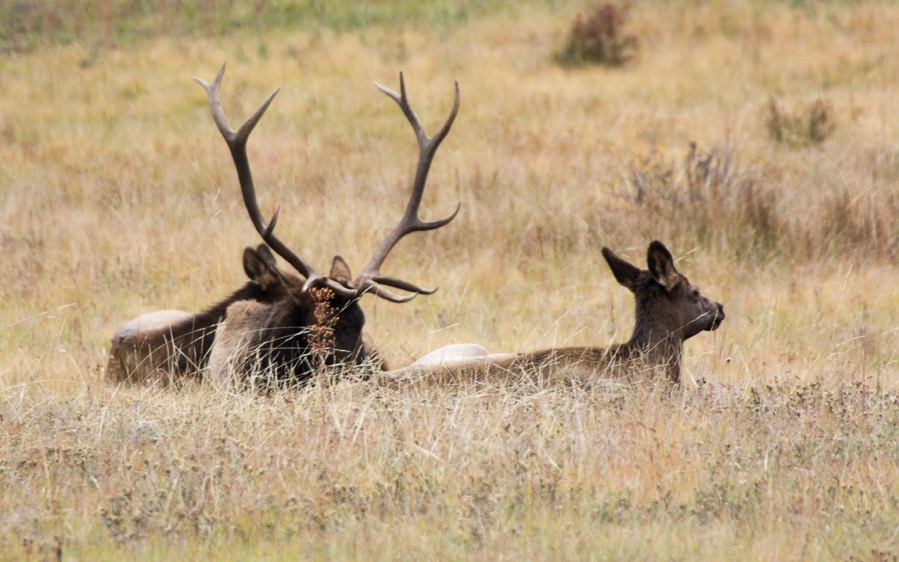 The next day…we drove in again. Bill and Linda headed off on a hike to the Devil’s Backbone area but Connie has been down with a cold since halfway through the rally and didn’t feel up to hiking. So we drove into the park again for…hopefully…some better photos as it was a clearer day than on our first trip.

Long’s Peak…the highest point in the park at 14,000something feet. 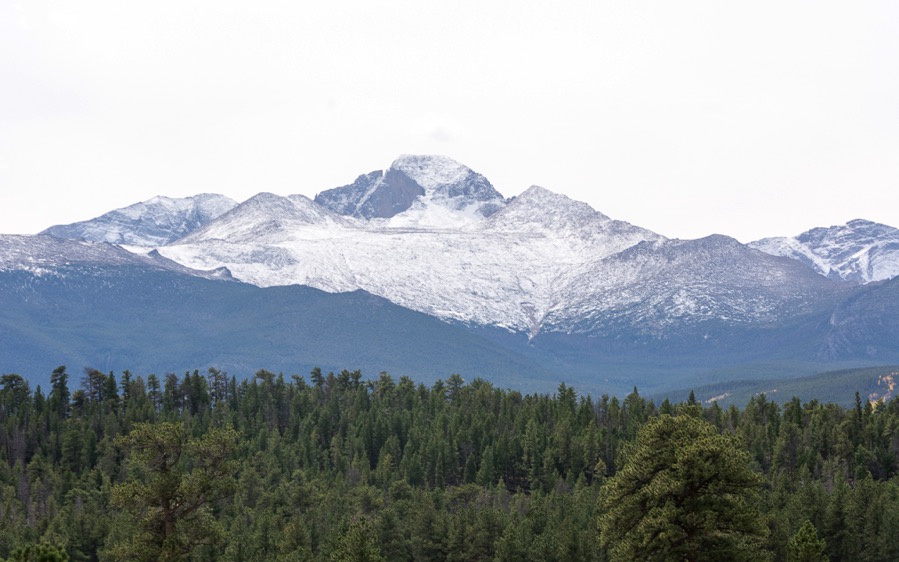 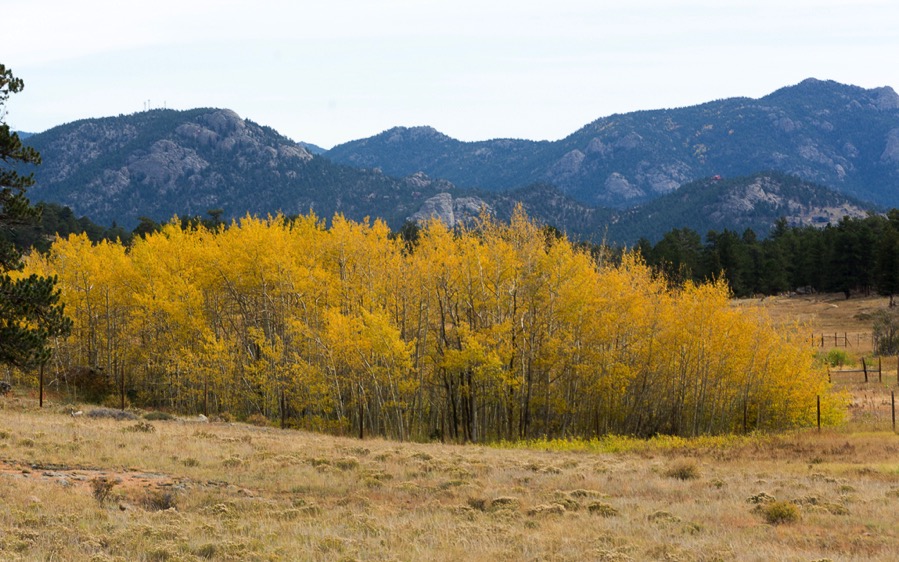 Big Thompson Canyon…you have to pass through this to get from Loveland over to the gates to the NP…quite narrow. 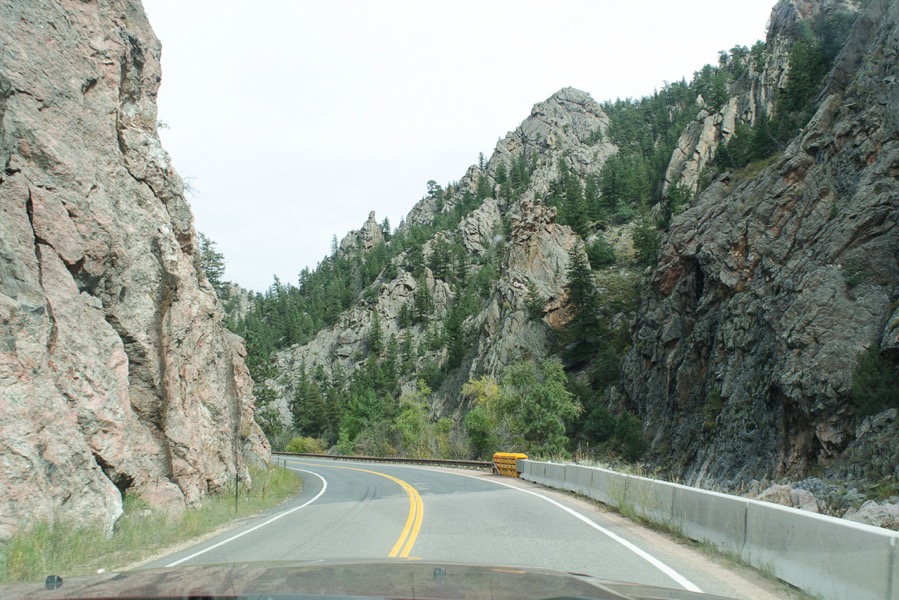 Spotted some sheep on the way out of the park…these were actually in Big Thompson Canyon and not in the park itself. About 15 or so grazing up on the slopes next to the road including the 3 ram Bighorns seen here. They’re a herd animal so these are probably all related. 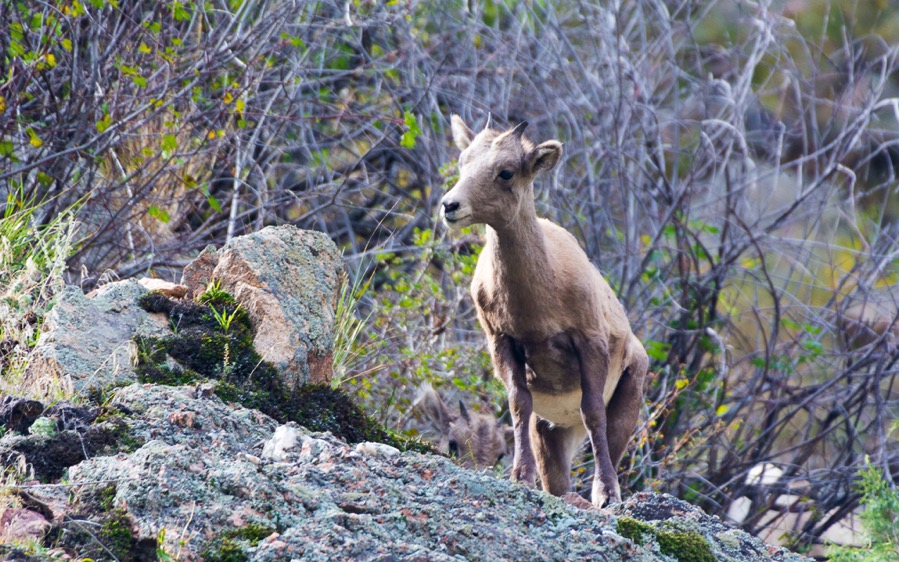 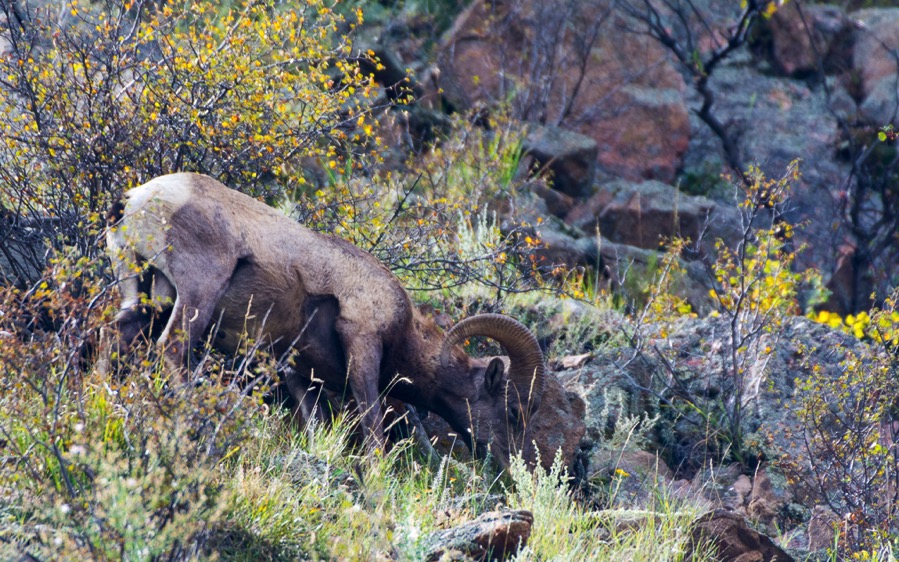 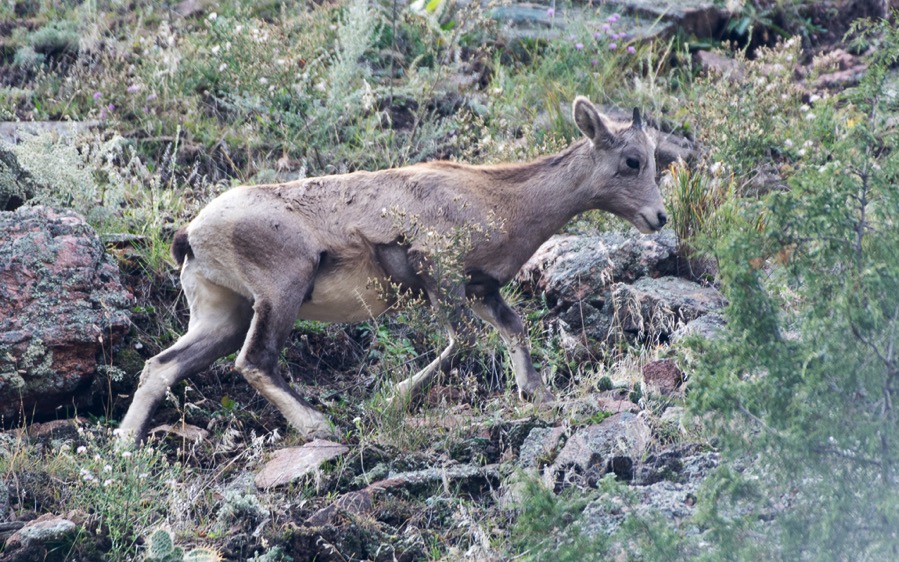 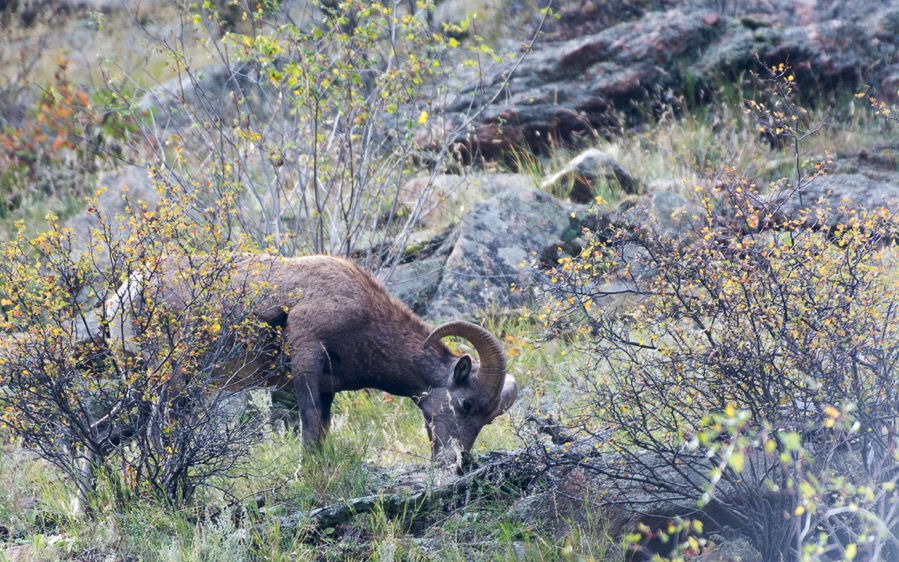 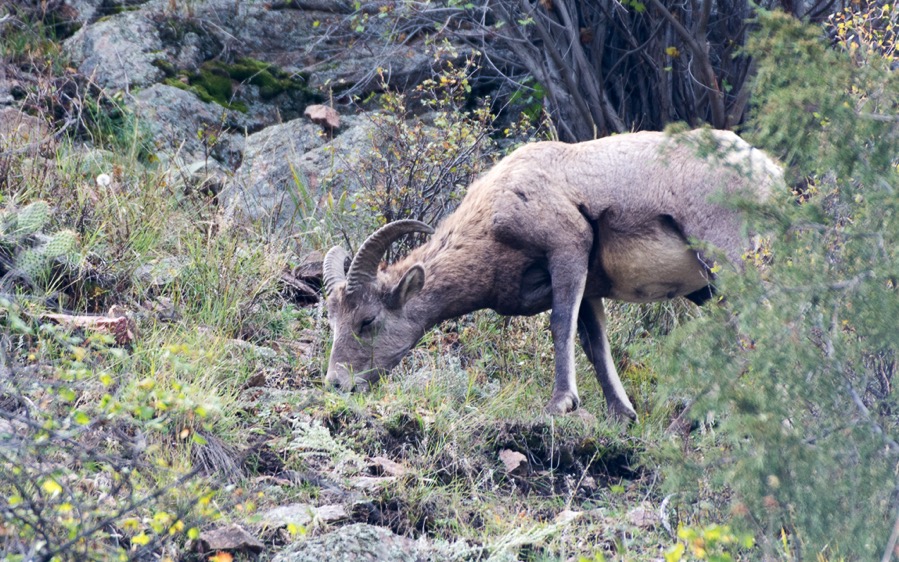 Another shot of Big Thompson in the really narrow section. The Big Thompson River is just past the roadway and down about 50 feet to the riverbed. Lots of rapids and nice little waterfalls but no place to pull over for a shot. Both this and the one above were actually taken through Big Red’s windshield by Connie. 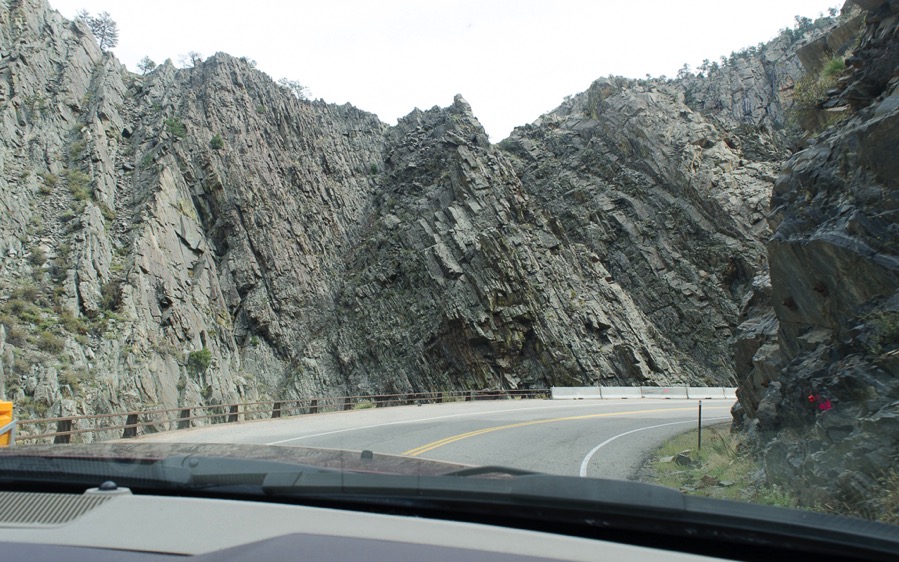 Our last day in Loveland we visited the Sculpture Garden next to Loveland Lake which is just west of Boyd Lake before heading to dinner with Bill and Linda at the Rock Bottom Brewery. 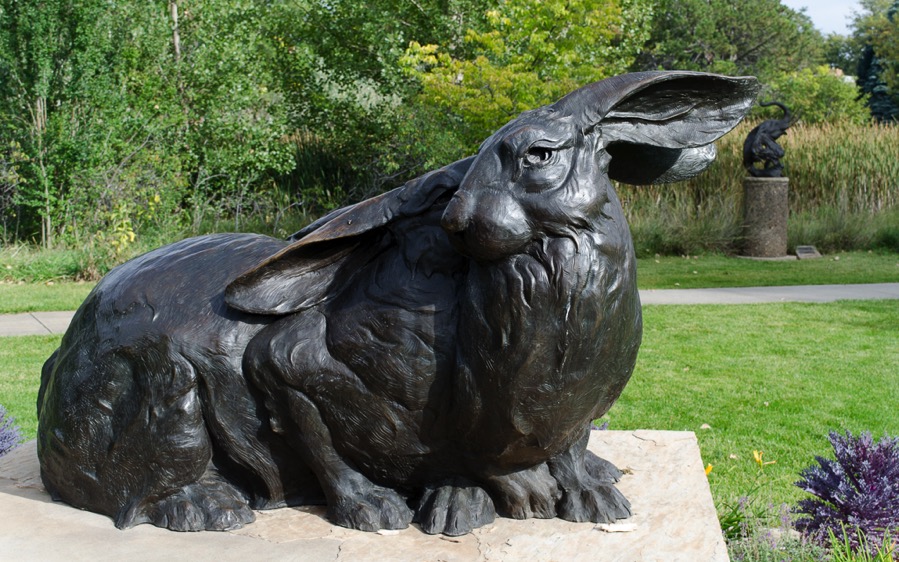 Extraordinarily detailed Girl with Basket…much more so than the other Girl with Basket which was mostly just a curvy blob. Her skirt had so much detail it almost looks real instead of bronze. 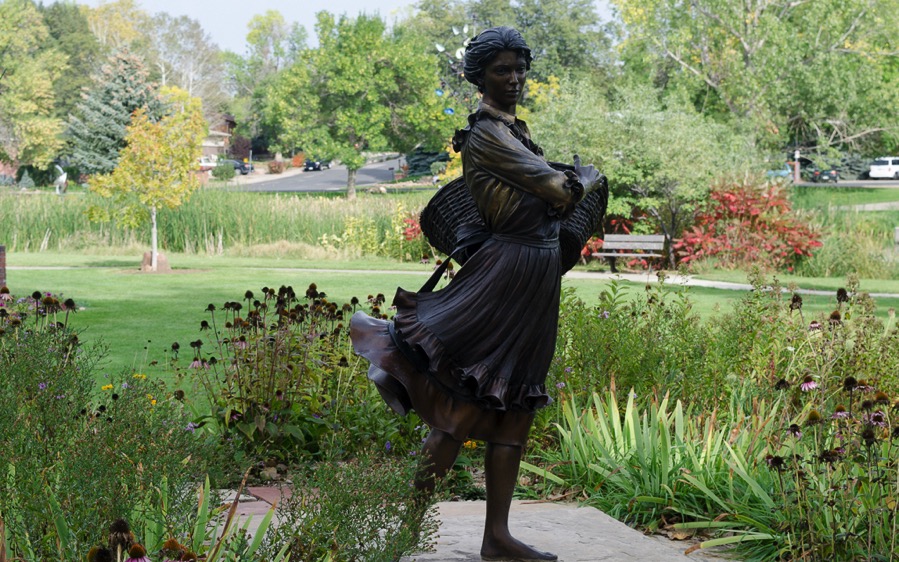 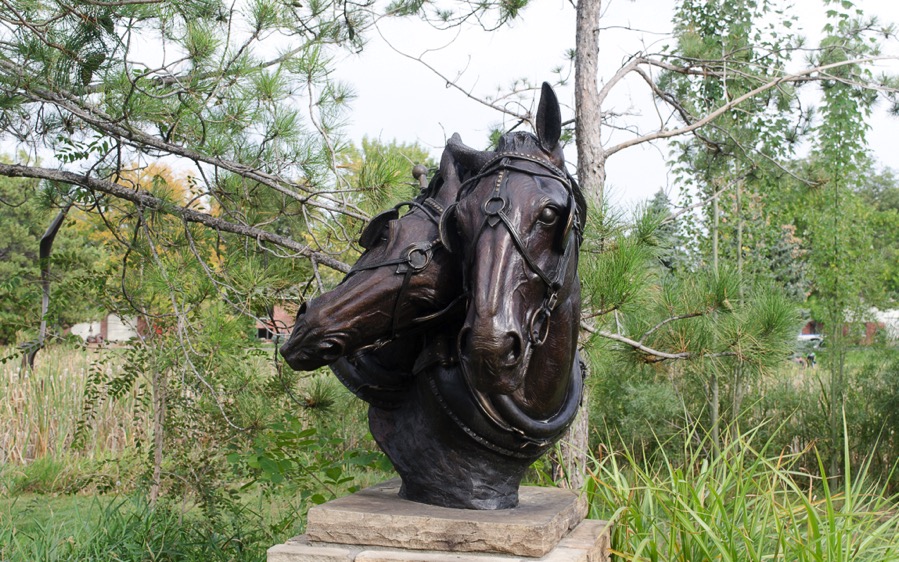 Neil’s favorite sculpture…he’s not a big art guy as you well know but he did like this one as well as the others in this post. 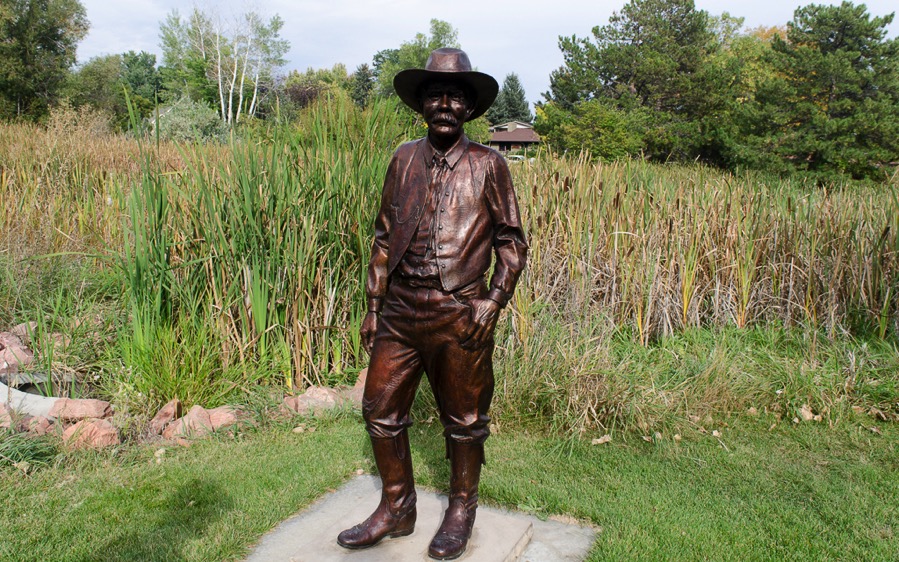 These are either Monarch Butterflies or Viceroy Butterflies…they are almost identical and share the same range. We think they’re Monarchs as they don’t have the black line across the wing about 2/3 of the way back. Monarch Butterflies are one of the few species that migrate…they fly at about 5.5 miles per hour and migrate from the northern United States all the way to southern Mexico and northern South America. 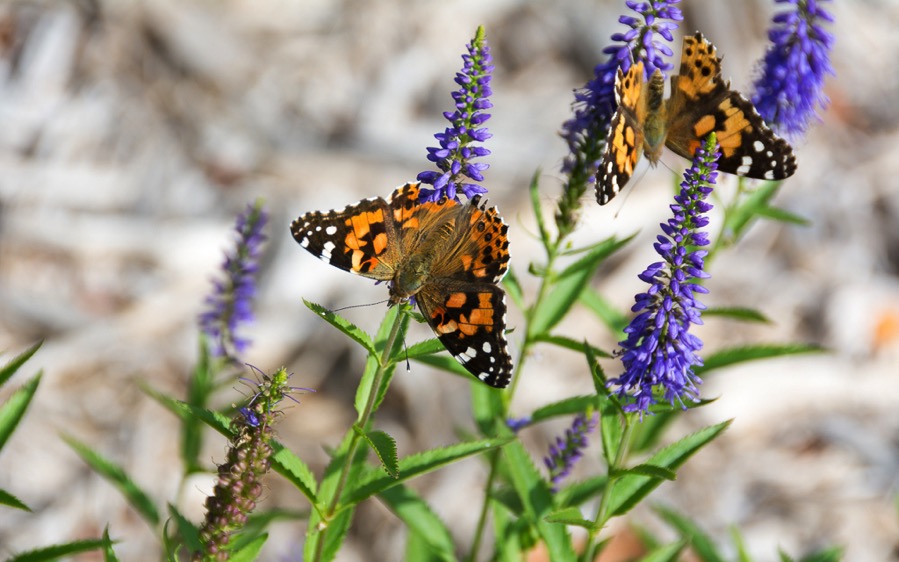 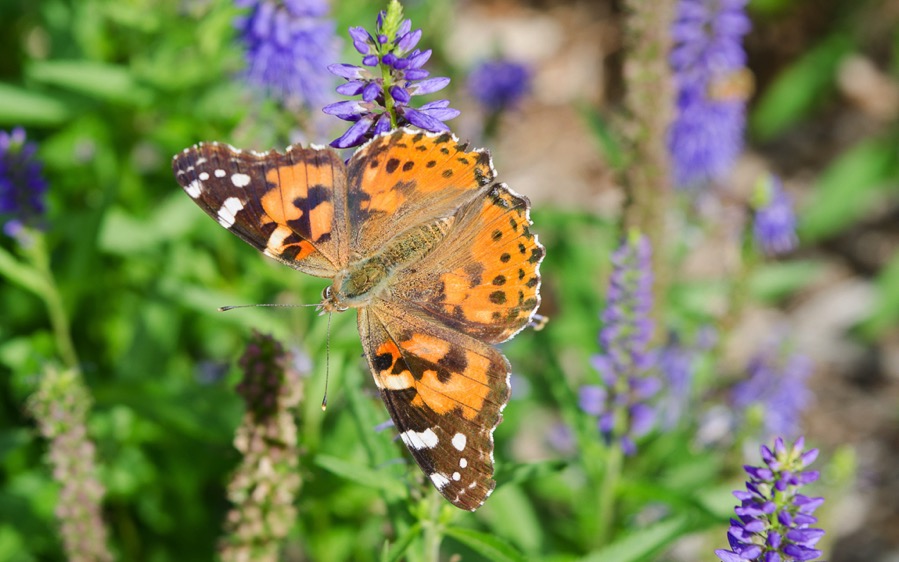 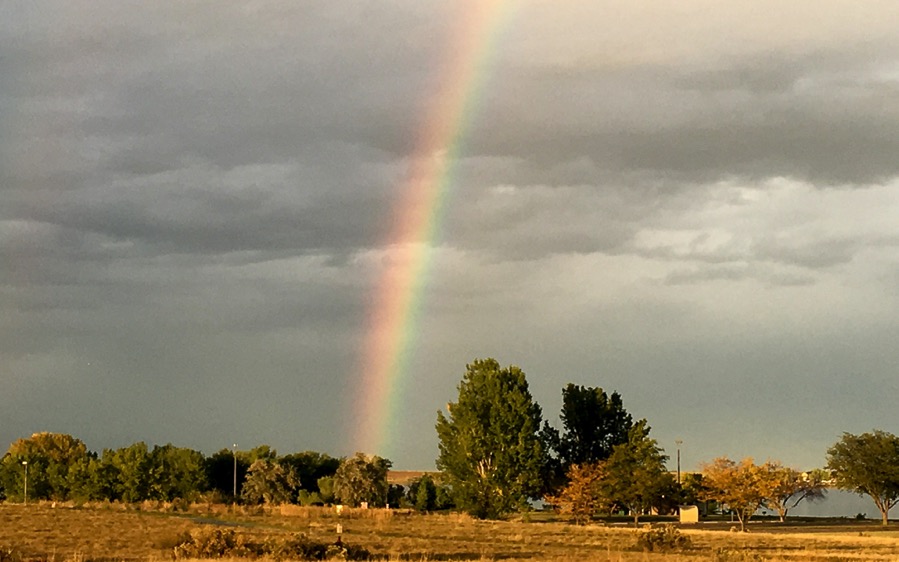 Heading south the next day to Colorado Springs…a shot of the Front Range just north of Denver and west of I-25. Snowing heavily at the higher elevations as you can see with a pretty decent snow cover on the peaks already. 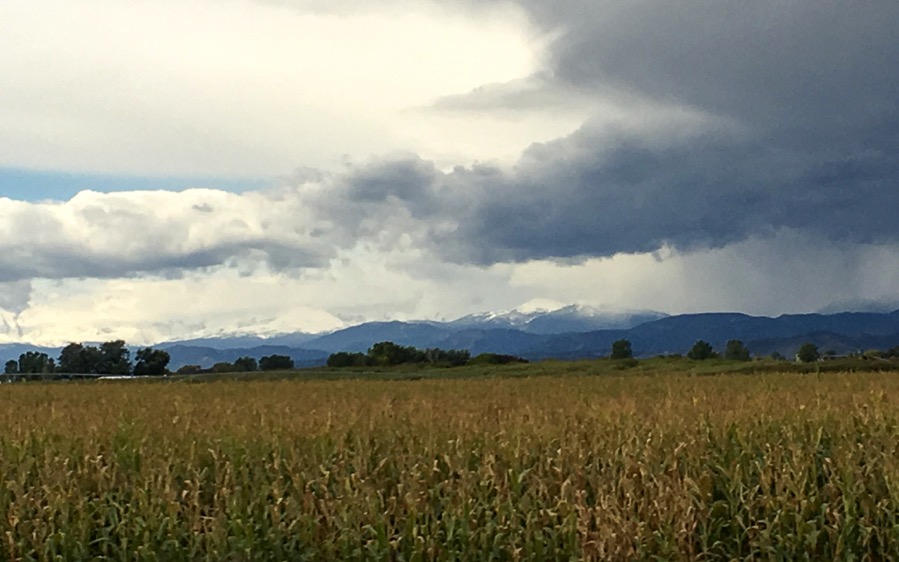 Interesting stuff from the net…just a couple this time as internet here at Cheyenne Mountain State Park…yes, right next to the NORAD command center deep inside Cheyenne Mountain…is pretty much poop. I’ll try to get a shot of the entrance to the facility for ya while we’re here.

Never really thought about it this way…but obviously true. 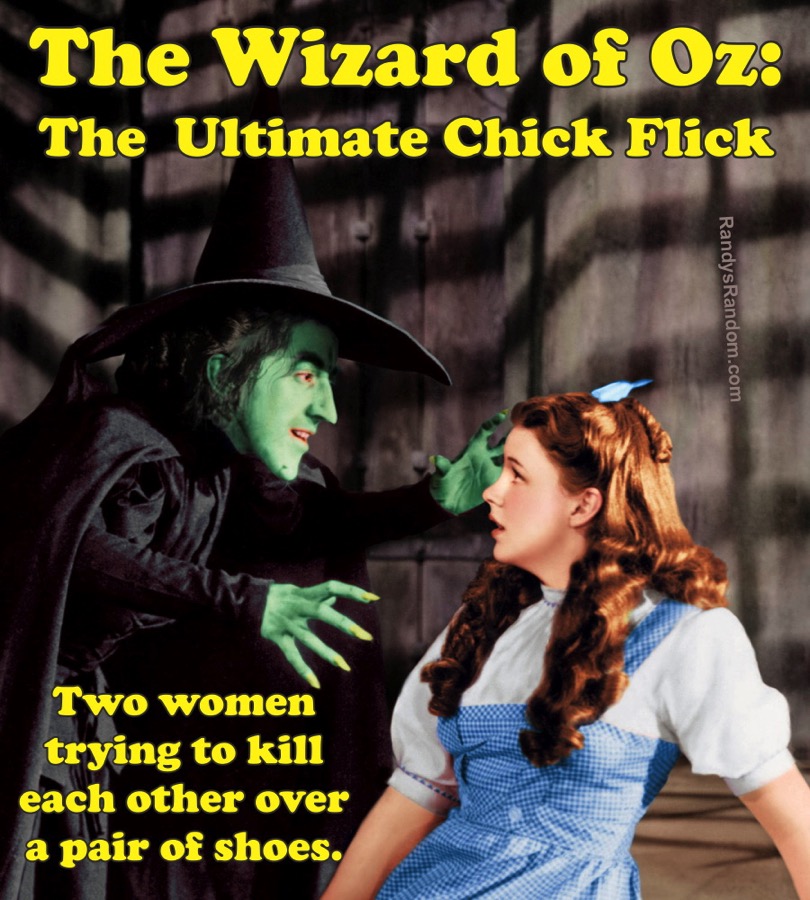 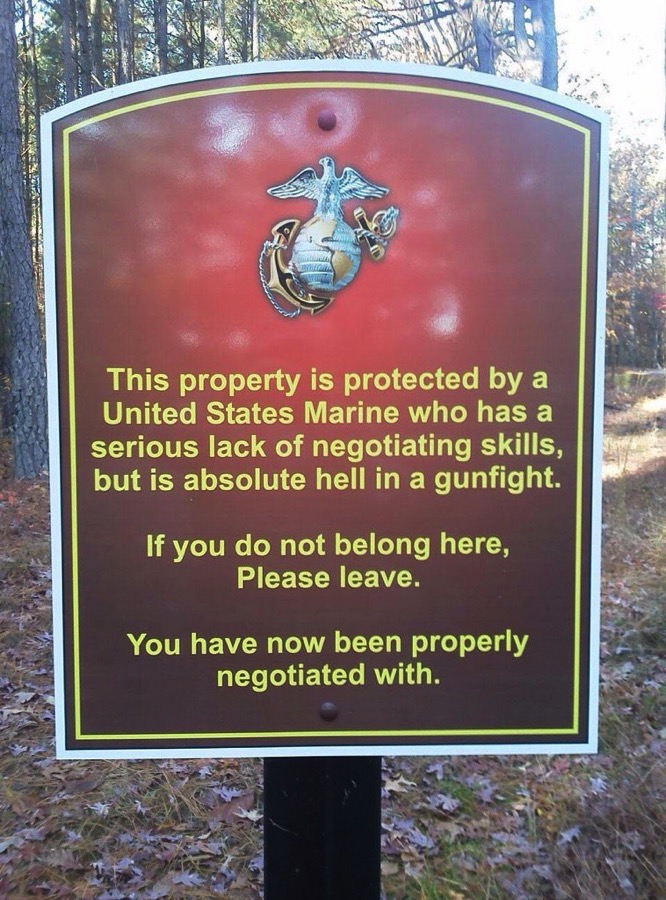 A note on the recent BS the NFL and other supposed role models are doing with their “take a knee” protests. They have a right to protest of course…but respecting the flag and national anthem takes higher priority…bastards should have their citizenship revoked. 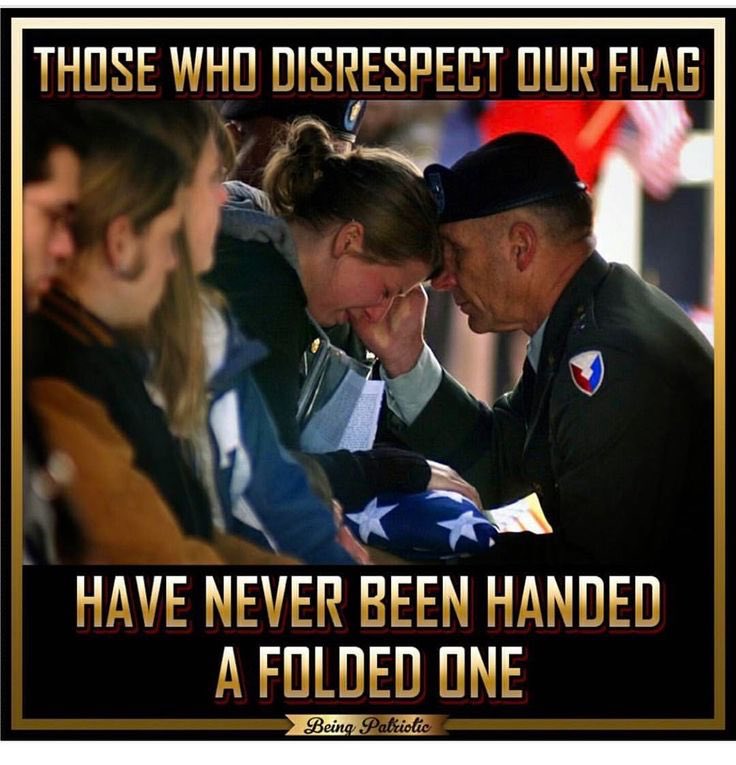 4 Responses to Been Way Busy These Past Two Weeks