Saturday was another day for Fun Stuff©. After coffee and some cottage cheese and blueberries that Connie made…we packed up and headed out about 0930 for our destination for the day…a hike at Skidaway Island State Park.

Skidaway Island State Park is…strangely enough…located on Skidaway Island…which is separated from the mainland by the Skidaway River. Now I’m not quite understanding how if it’s a river that makes it an island…but I took a gander at the map and I guess it all comes down to what you call a river, what you call an island, and the whole swampy coastline round the Savannah area.

Farthest north is the Savannah River which flows inland along the GA/SC border…in fact it is the border…to the city of Savannah. South of the Savannah River there’s a whole passle of tributary rivers, creeks, channels, and such…and most of them act like regular rivers heading inland with sort of peninsula like parts of land between them…among these are the Ogeechee, Little Ogeechee, Vernon, and Wilmington Rivers. In between the Vernon and Wilmington rivers running basically parallel to the coast is a single piece of water that separates the mainland on the west from Skidaway Island to the east…this river is either the Skidaway or Moon Rivers or Shipyard Creek depending on which of the names on the map you choose to believe. But to be fair it does completely separate Skidaway Island from the mainland…but I digress too much into geographic minutia I believe.

Connie wanted me to tell ya ‘bout the frog incident…last Tuesday evening we discovered a stowaway…he was just a sitting there right in front of our fridge…one of the itty bitty tree frogs that we found a lot down in North Fort Myers…well, apparently he decided to head north for the summer and hitched a ride. Neil evicted him straightaway…put it out in the grass at Meera’s RV…thats as far north as he’s getting with us. He didn’t have a passport so we clearly needed to not be complicit in his illegal immigration to Canuckistan later on next month.

This morning we found out that one of the hard drives on our file server died…luckily Neil had ordered another couple to be delivered to the human kids house this week and his backup routines made sure that we didn’t lose any data. He’ll have to figure out how to get it replaced under warranty I guess.

Ok…on to Skidaway Island State Park. We got to the entrance and Connie went in to pay our $5 per car entry fee and it turned out that retired military only have to pay $3.75. She didn’t have her ID on her and offered to go out and have Neil come in but the lady at the desk took her word for it and we got ourselves parked. Our hike for the day was a combination of four trails…we started on the Sandpiper Trail Loop, switched over to the Avian Loop, then the Connector Trail and ended up on the Big Ferry Trail back to the parking lot…essentially a large clockwise loop of about 3 miles. It took us just under 1 hour and 7 minutes including our stops…it was a pretty flat and easy trail with boardwalks over portions that are submerged at high tide.

This turned out to be a pretty decent walk in the woods…but it was kinda minimal as wildlife sightings went…but you can only photograph what you see I guess.

First up were some Fiddler Crabs…a single one on a dry section of the salt marsh and a rumble of them a bit farther down the boardwalk in a wet section. 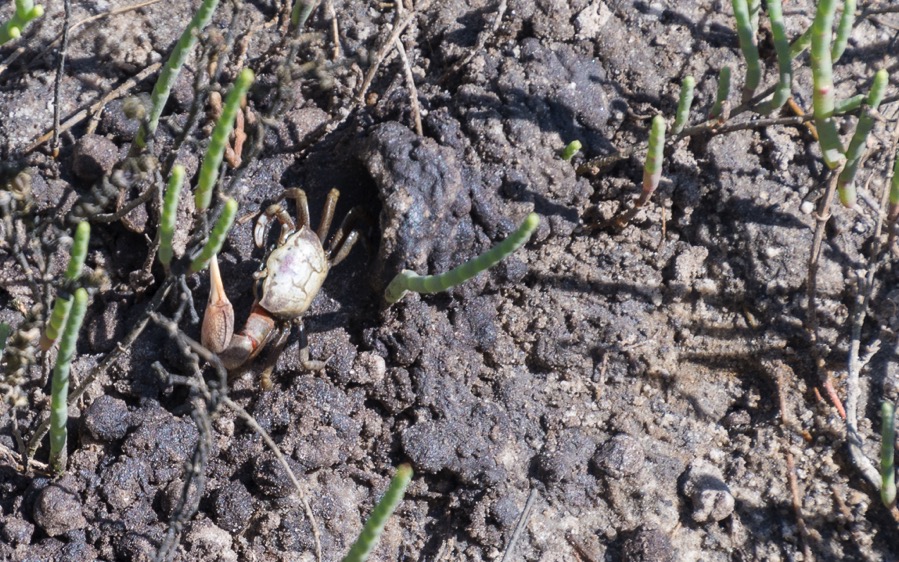 We spotted a female cardinal.

And passed through some old Confederate fortification trenches…these were originally setup to defend the island but were abandoned when their forces were about to be cut off by the Union Navy and the forces retreated to Fort Pulaski as I discussed the other day. 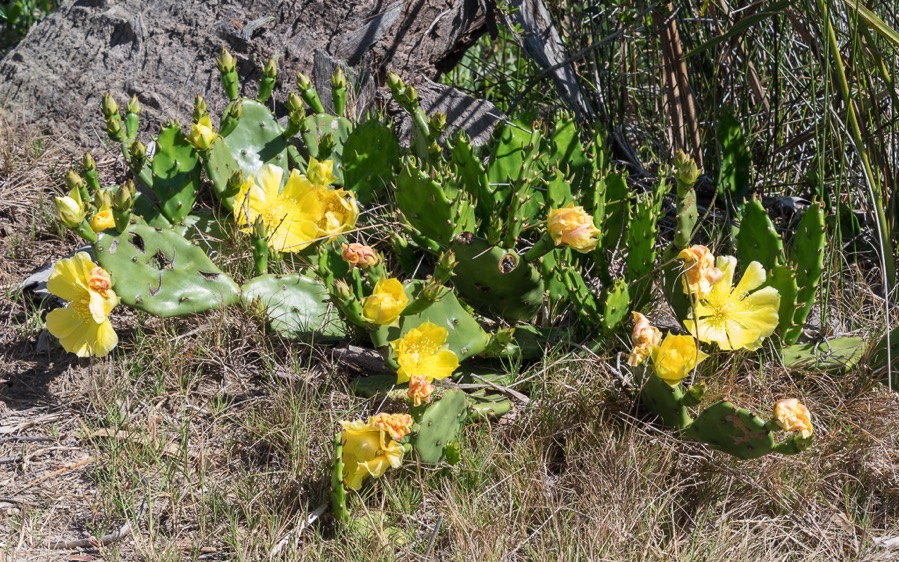 We stopped along the Skidaway River for a water break.

Connie heard and then spotted…and Neil re-spotted him when he flew to another tree…a Pileated Woodpecker…of Woody Woodpecker fame. Sorry ‘bout the not so great photo…but he flew away before Neil could get the bird lens out…but as I said you do the best you can.

At the observation tower…located about the 2 mile mark on the above map at the far north end of our loop…this dragonfly was sitting about 15 feet away on top of a tree.

And Connie got some general overview shots from the tower.

We met a couple of nice middle aged ladies on a walk with their dog at the observation tower before heading the last mile back to the car and heading home for lunch. Neil wanted to stop for a Margarita…it was Cinco de Mayo…but we decided to go have lunch instead. We completely ignored the Kentucky Derby later on in the afternoon and had Carne Asada Tacos for dinner

Sunday morning we headed off to Mass then afterwards Neil made an omelet out of leftover quesadilla from the other night at the pub and black beans and rice we had left over ourselves. This afternoon we’re off to an organ/voice recital at the Cathedral of Saint John the Baptist…then off to dinner but I’ll report on that in my next missive.