Wednesday morning we started moving about 0830…it was misting, cold, and dreary…and finally got underway from Shore Hills CG for our 259 mile trip over to Eastport. It was a much longer day than we anticipated…we thought it was only on the order of 175 miles but that was the short distance way along the coast on itty bitty roads. The longer, partly freeway route that Big Red’s GPS took us on was a bit longer.

Fortunately…about halfway through the trip the rain dried up and it remained partly sunny to mostly cloudy off an on the rest of the drive and we eventually drove the last 25 miles on US-1 down onto the peninsula…well Moose Island actually…where Eastport and the Seaview Campground is located.

We quickly got puled into site S-11…a nice pull through site and as the photos below show the place is. aptly named. We are about 50 feet from the water and a mile or so from open water in the Bay of Fundy. Our reasons for stopping here are three…one more lobstah roll before we finish up our sampling and judge a winner, it’s just about 30 miles from Calais ME/Saint Stephen NB where we’ll cross the border into Canuckistan tomorrow which was too far to our first stop in Saint John NB from Boothbay to really do it in one day and include the border crossing and any associated delays with that. So we planned on a short day tomorrow…only 100 miles and the border crossing, and we wanted to see the tidal eddy located here…more about that below. We’ll spend the weekend in Saint John NB…there’s a reversing falls we want to see and we need to do laundry…before heading onward farther into the Maritimes.

A few shots Connie got while Neil was cooking dinner…she wandered ‘round the lower portion of the campground a bit. 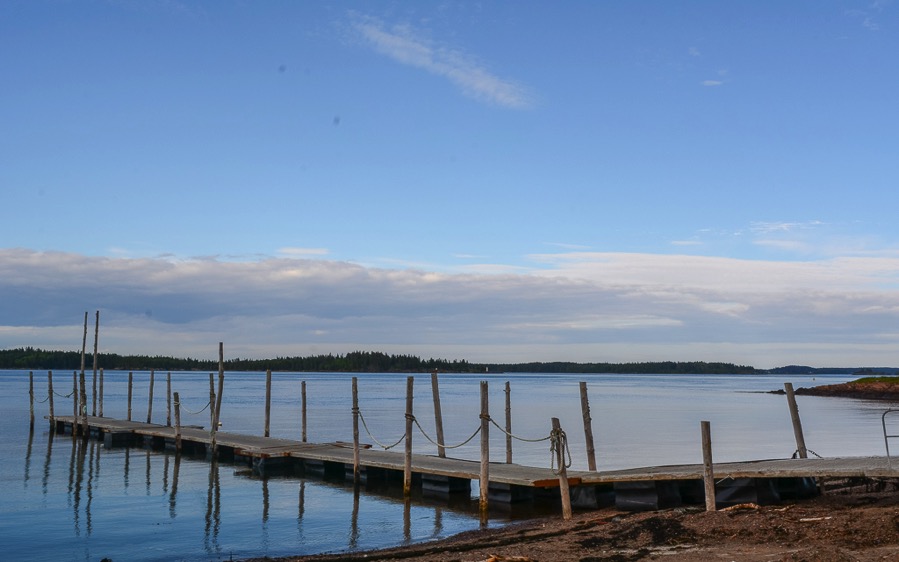 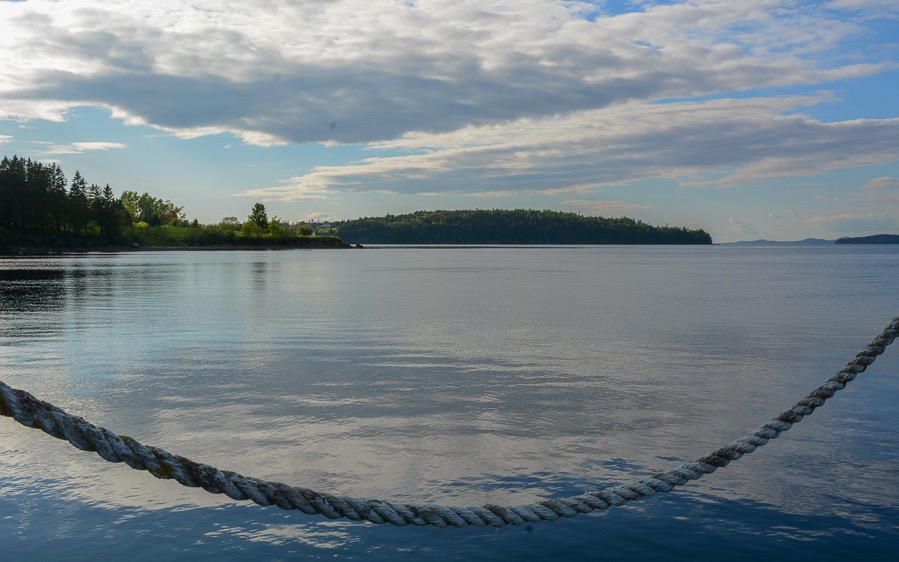 A shot of the rig parked in site S-11…taken from the wharf in the second shot above.

Neil took a pano showing our site and the wharf…really a pretty nice spot…and we even have the view out of our curb side windows.

Thursday’s Fun Stuff© was a drive down the Bold Coast…which turned out to be pretty much a bust as far as seeing the coast went. It was in and out of clouds and fog and every time we got near the coastline the fog picked up so there was basically zero visibility.  We did get a few photos along the way though.

The lighthouse at Quoddy Bay State Park…you can see how foggy it was…strangely enough when you got 2 miles inland from the shore it was clear and blue skies…very, very strange. 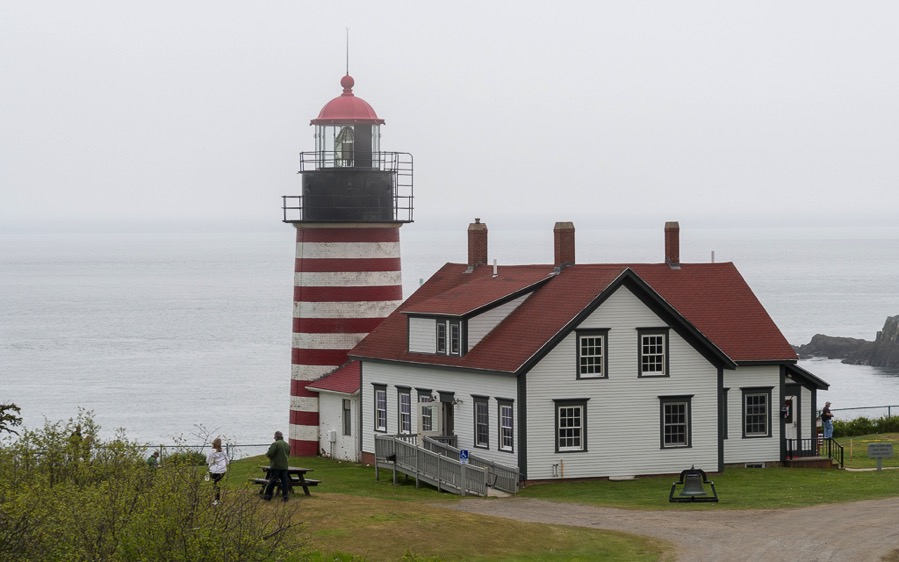 Osprey nest…we almost caught the male bringing a stick to his mate who is roosting on the eggs. Trust me…she’s in there but it was windy and she wasn’t coming up for air…probably doing her best to keep the eggs warm as it was only in the 50s and the wind was 25+ knots.

After our drive and fuel stops…we headed down to the Eastport Whirlpool…also known as The Old Sow. Eastport which is on Moose Island and nearby Canadian territory Deer Island basically sit in the mouth of the Bay of Fundy…that of the famous really large tidal range. When it gets close to high tide…there’s a whirlpool between the northeast coast of Moose Island and the south tip of Deer Island…we got some shots but it wasn’t nearly as dramatic as one might think. It was a circular-ish eddy with some strong currents, but probably not worth visiting unless you were here anyway…which we were. That’s Deer Island which is Canadian in the background. Supposedly…this is one of only 5 “significant” whirlpools worldwide…although I guess it all depends on how you define significant. According to wikipedia…sometimes depressions in the water surface up to 17 feet deep occur…we didn’t see any of those today and although it was worth seeing if you’re here…don’t make a special trip for it.

Overall though…Eastport is a pretty nice and laid back little town. It’s far enough from the beaten path that tourists take that even in season it’s probably not too crowded…I could see us spending a couple of weeks here eating lobster and drinking at the Happy Crab and several other local drinking establishments. 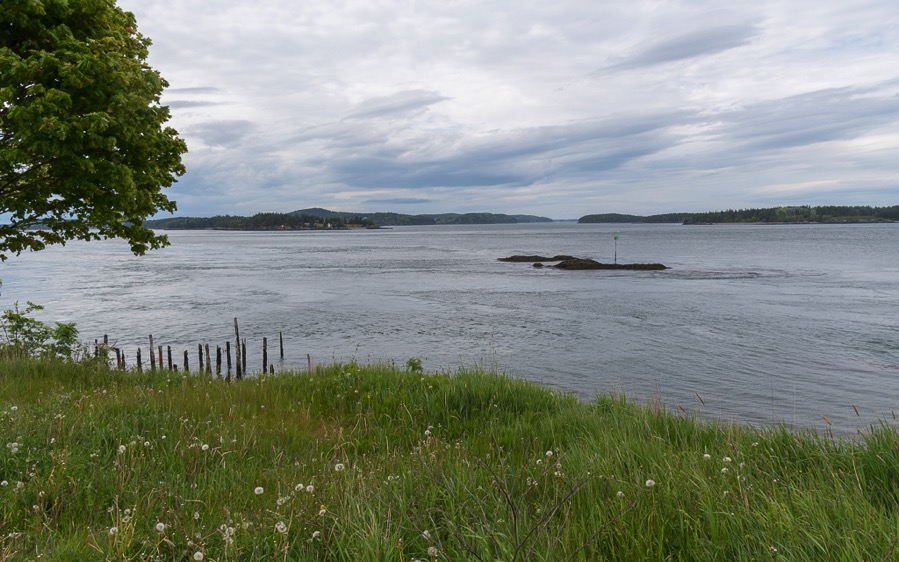 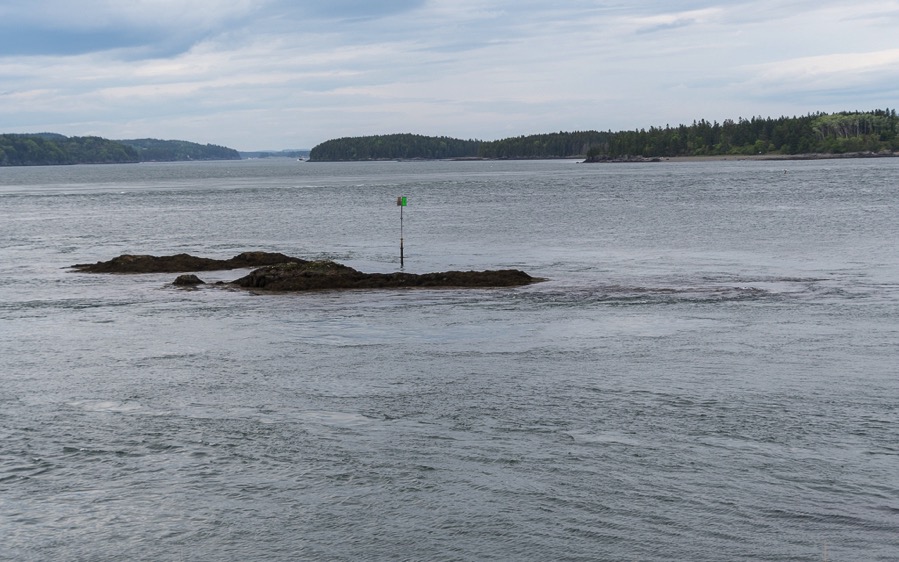 Afterwards we headed home, filled up both Big and Little Red with fuel then headed off to the Quoddy Bay Lobster Market for dinner…we had a good+ lobstah roll…still working on my overall evaluation of all the ones we tried…then stopped by the Happy Crab where she enjoyed…although enjoyed is a word I would use advisedly based on her choice…a Stella Artois. Neil chose…wisely as the old gray knight would say…and had a couple of Goslings Rum, ginger ale and limes…pretty close to a perfect cocktail ya know. 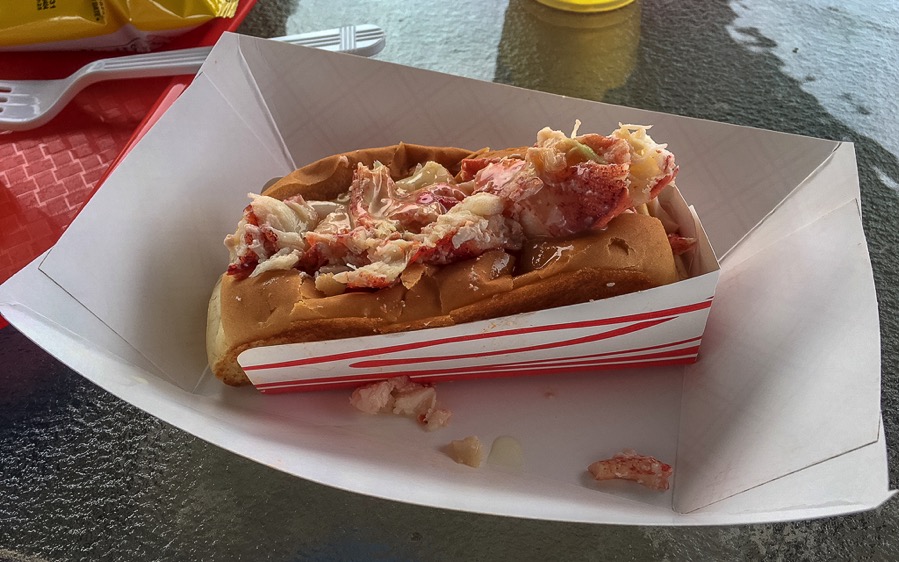 Seriously…Frontier National Bank? In Maine? Is there any actual frontier here?

Sculpture honoring the fishermen of Eastport at the commercial fishing boat pier just north of the Happy Crab.

OK…on to interesting things found on the net…just a couple of quickies today as there’s a bar in the campground named Fin’s that we clearly need to go and visit.

We had a nice visit up to Fins…it was uphill about 300 yards and 100 feet vertical but we persevered and had a nice chat with the young ladies running the joint. On the way back we…well, Connie actually had the idea but Neil took the photo…anyways we grabbed a shot of the rig set against the water and Canuckistan’s Deer Island to the northeast.

We really, really could spend a couple of weeks here…or even a month…but later in the summer so it’s a tad warmer. Might be on our plate one of these years…who knows? This place really has the “It” factor going for it…both the campground and the town.

Funny how this works…ain’t it?

You know what this is…doncha? 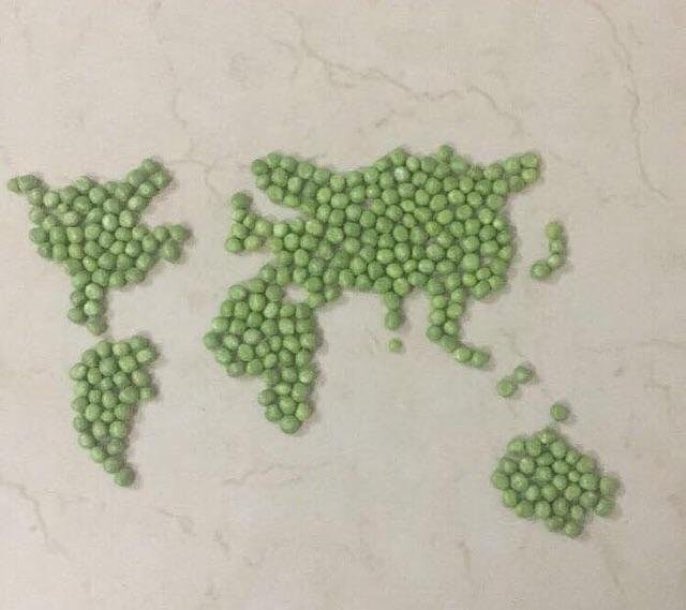 Sure ya can’t figger it out?

Gotta be from Alaska…or maybe the Yukon. 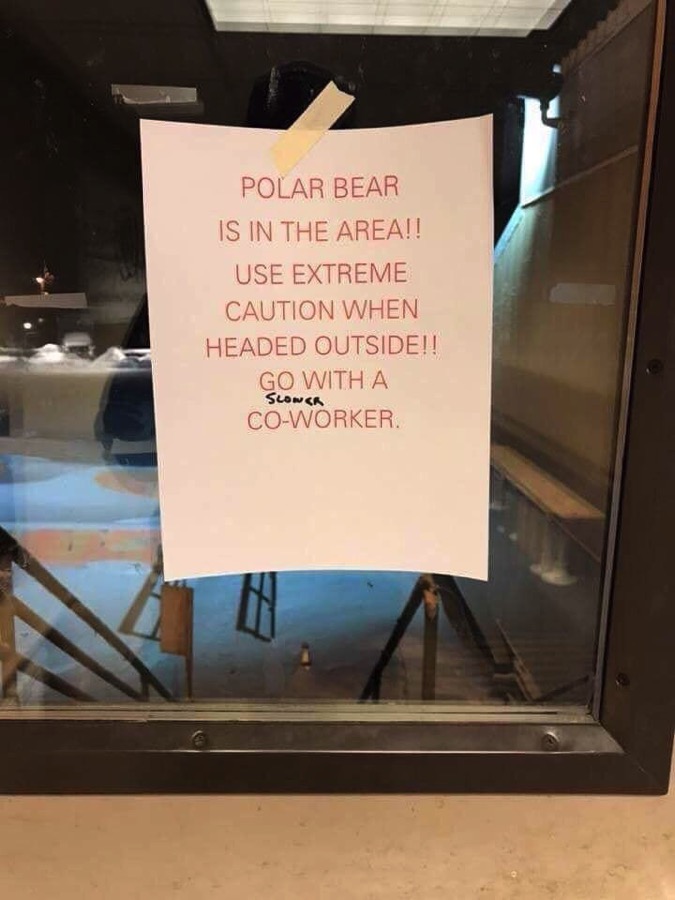 Most interesting cat in the world…assuming such an abomination actually exists.