After our long day on Tuesday we took Wednesday off as it was supposed to rain all day. Slept in…didn’t get up until 0730…had breakfast and pretty much did nuttin’ all day. Can’t really say much more about the day…it ended up not raining until later in the afternoon but then rained pretty hard most of the night.

Thursday morning…it dawned partly cloudy and we had a shorter day planned…a lighthouse, drive along the coastal road a bit and lunch at Neils Harbor. So we headed out about 0930…we wanted to make sure that lunch didn’t get too late since Neil had pork piccata planned for dinner…one of our favorite dishes but it’s a pain to make as it generates a lot of dirty dishes…didn’t want to be too full from lunch to enjoy it.

Our first stop was at the Saint Paul Lighthouse…which turned out to be a bust lighthouse-wise but we got some nice photos nearby so it wasn’t a total bust. The lighthouse is steel and has been moved several times over it’s lifetime…including about 10 years ago when it was moved to it’s present location at a small museum and although it’s near the water it’s way too far inland along the river it’s on to be useful as a navigational aid.

We got a photo of it anyway…then headed back inland about a half mile or so and got some nice photos of the fishing boats along the river along with some reflections on the pretty calm water today.

Next up…we headed down towards our lunch destination at Neils Harbor…along the way we followed the coast road for a few miles…got stuck in one construction zone for 15 minutes or so but we did get some nice photos as we progressed.We also stopped for a short hike at White Point out to the end of the point…maybe a mile or so total.

Once back at Neils Harbor…we headed to the Chowder House right next to the lighthouse for lunch…corn and crab chowder with a couple cans of iced tea…the chowder was decent but not great and it met the goal of making sure we weren’t too full from lunch to enjoy dinner.

After lunch we got a few photos of the waves breaking over the rocks just outside Neils Harbor and a shot of the lighthouse and harbor entrance at Neils Harbor since it was a clear day as opposed to the way it was on Tuesday on the east side of the island.

Our last stop of the day…the local library for some slightly faster than the campground internet connectivity…between our two laptops, two iPhones, and two iPads we had over 100 applications to update. So we spent almost two hours there catching up on email, downloading apps, and various other connectivity required tasks…and we even learned something along the way. There was a teaching seminar for a group of kids in the 10 year old range…they were talking about acids and told them that battery acid like in your car battery has a pH of zero. We said…nah, it’s only about 2 or 3, nothing gets to 0 on the pH scale. So we googled it and turns out they were almost right…sulfuric acid which is considered a strong acid and is what is in your battery has a pH of close to 0 but never actually gets there. Who knew?

Ok, on to photos from Thursday.

Saint Paul Light…yeah…we didn’t think much of it either. 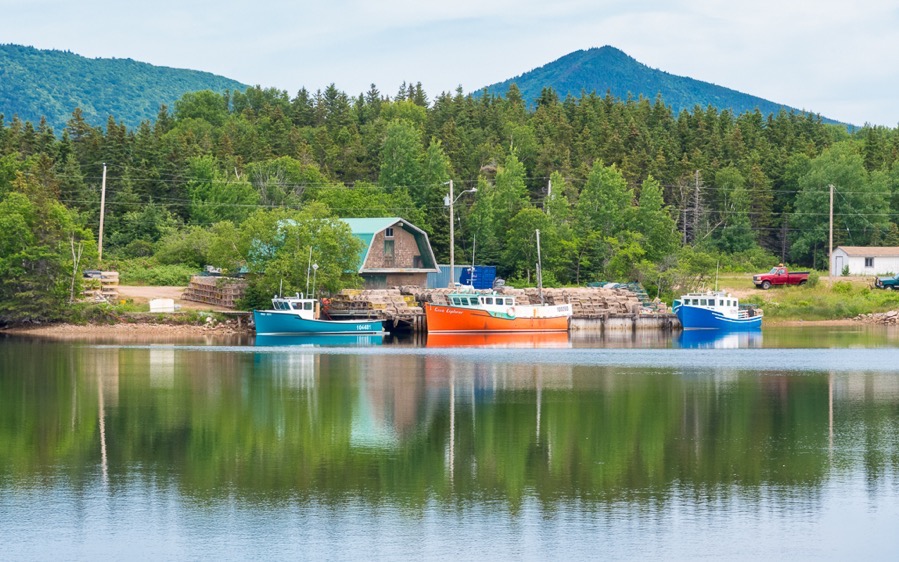 Shot of the coastline as we headed toward White Point…most of the coast of Cape Breton Island is like this…steep cliffs right down to a rocky beach…there are only a few sandy beaches we’ve seen here.

About halfway out White Point looking back toward the cove.

There was an old cemetery out near the point…it had about 3 dozen obvious grave markers in it but only these two had any markings on them…the remainder were just blank stone markers. Guess you had to remember where grandma was buried back then. 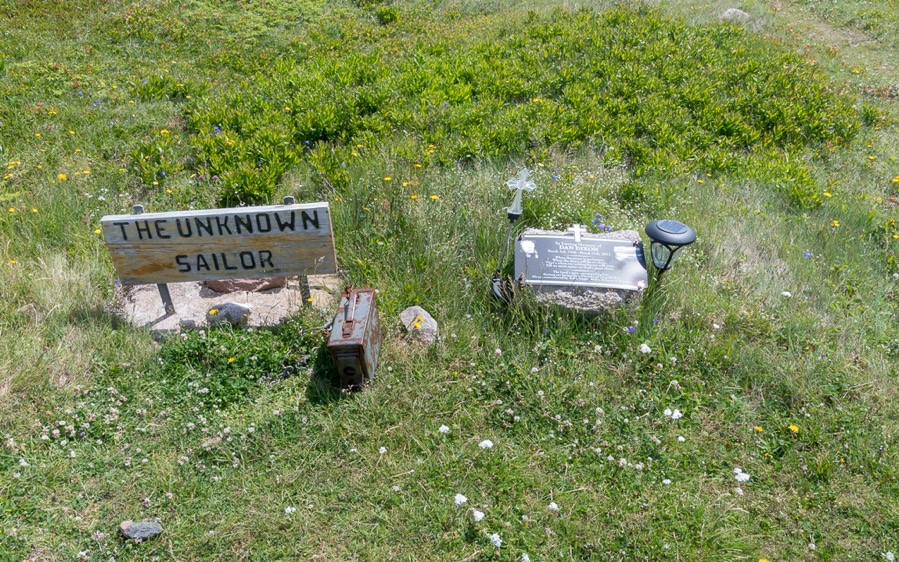 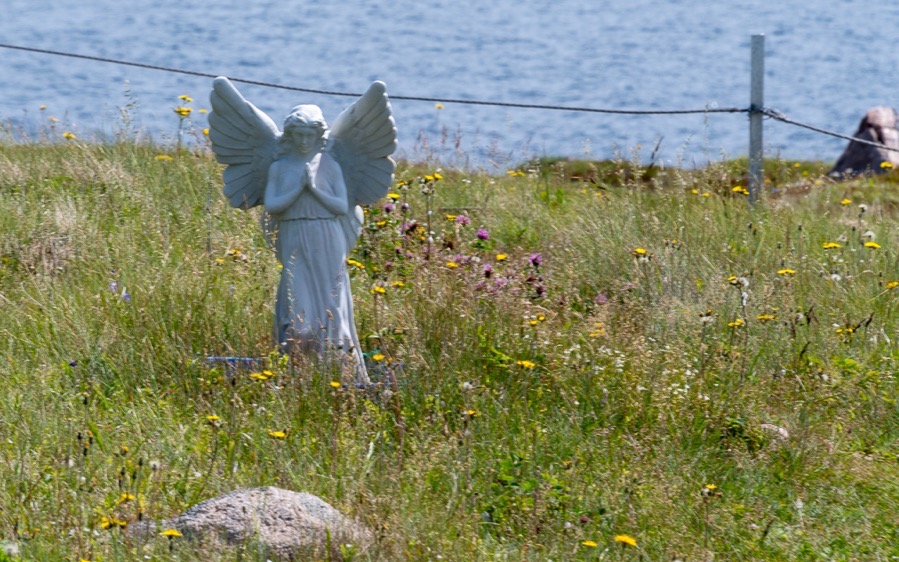 A couple of small rock islands right off the end of the point…covered with shore birds. We missed seeing a juvenile Bald Eagle take one in the air and eat it for lunch but about 10 minutes or so. Darn the bad luck.

Really clear water…and the depth drops off pretty fast as you can see. 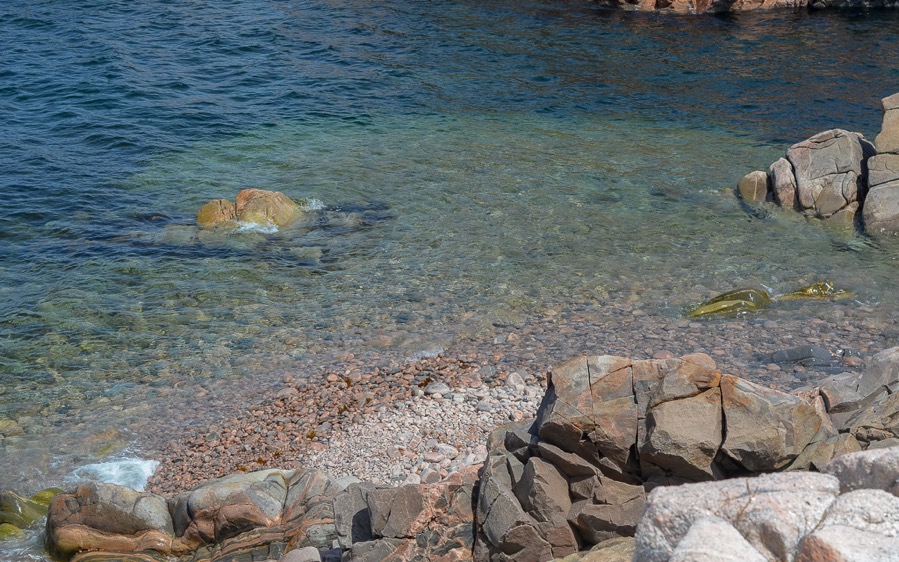 More flowers by Connie…she’s getting the hang of that depth of field bokeh thing.

The rocks down near the shoreline here are about 10 inches in diameter and as smooth as glass from all the wave action over the centuries.

Rocks outside Neils Harbor. We really liked both the water splashing up on them… 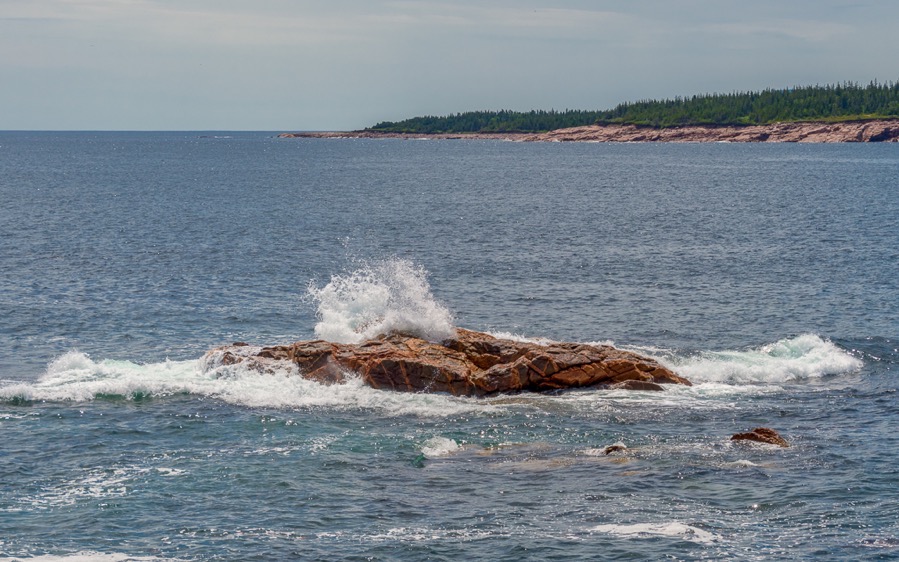 As well as the resulting temporary waterfalls after the wave receded. 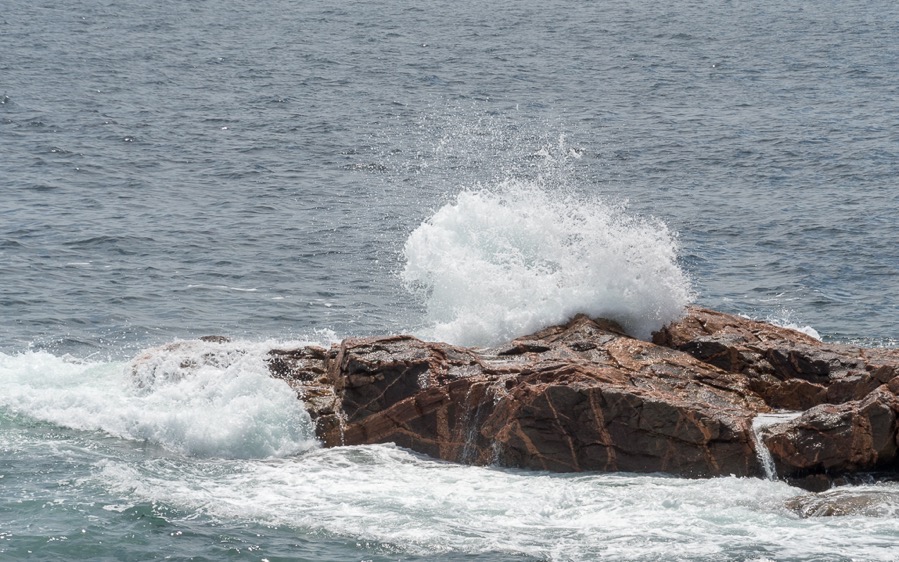 Neils Harbor light and harbor entrance…the harbor is just around the point where the light is.

They got these signs all over up here both in Cape Breton and there were over in Newfoundland too…and they’re all damn lies I tellya.

Ok, on to Friday…our last day here on Cape Breton Island before we continue westward into Nova Scotia and Prince Edward Island (PEI). We were out the door by about 0930 or so headed for our first stop of the day at Mary Ann Falls…this was deemed to be the adventure portion of the tour as it was 6.5 km up a gravel road…but it was far from the worst gravel road we’ve been on up here in Canuckistan…in fact it was a pretty darned good gravel road. We arrived at the parking lot just as the only other car there was leaving…so we had the place to ourselves for about 40 minutes…it was about a 120 foot descent down the gravel road past the parking lot then another 60 feet or so down the stairs to the base for photos. We turned off the Cabot Trail less than a kilometer from the campground and were almost immediately onto the gravel road heading up. Mary Ann Falls is the highest volume waterfall in the park according to the brochure…it’s about 60-70 feet tall overall but the creek it’s on is only 15 or so feet wide at maximum so it’s not really that much volume anyway. 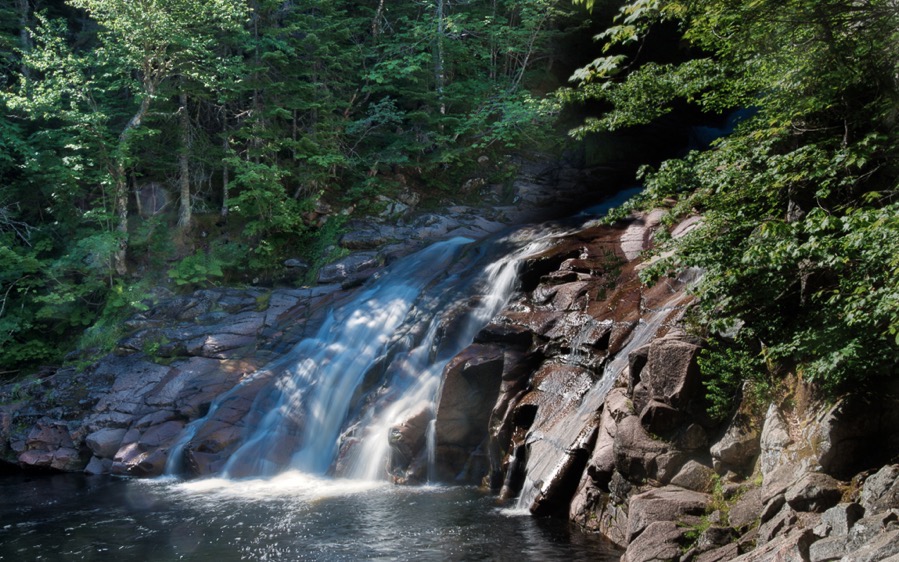 After our 40 minutes or so alone soaking up the ambiance…just as we were about done…a couple more folks showed up so we hiked back up to the parking lot and headed back down the gravel road…passed 4 or 5 cars coming in so obviously we hit it at the right time for solitude. Once we were back down to the Cabot Trail we headed north 8 or 9 km to our second waterfall of the day…it’s located at Black Brook Beach…which incidentally is where Black Brook drains into the Atlantic…most of the beaches with sand here are at brook or river mouths and the flowing water has carried silt and sand downstream from the mountains to form a sandy beach instead of the more common rock beach. The falls itself is not on Black Brook but on Still Brook just north of the beach…it falls about 20 feet or so over an abrupt edge basically onto the beach.

On the way back down from Mary Ann Falls we got this shot looking southward along the coast. 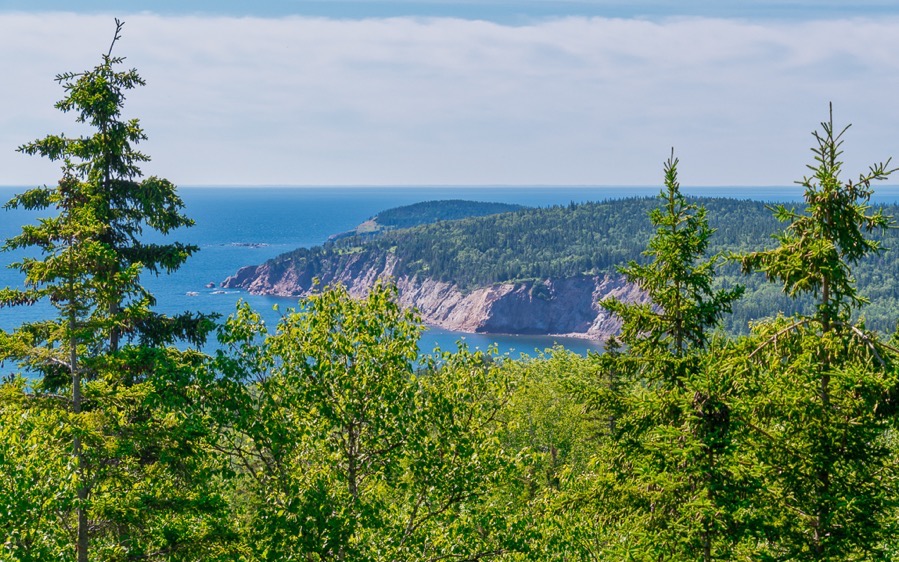 Then once at Black Brook Beach some shots of both the waterfall itself as well as ocean swells breaking over the rocks.

Connie got this one of a swell breaking and splashing up over the rock almost perfectly timed…it’s the best shot of this variety we got here.

Next stop out into the ocean is either Iceland or Ireland.

Both a close up and a wider view of the unnamed falls on Still Brook…after the single drop you an see it sort of dribbles through the rocks down onto the sandy beach and then runs off into the ocean.

And with that our work here at Cape Breton NP is done…we went home for lunch then we’ll head down to the library to post this, get some more apps downloaded, and probably do some more planning for our time at PEI next week. 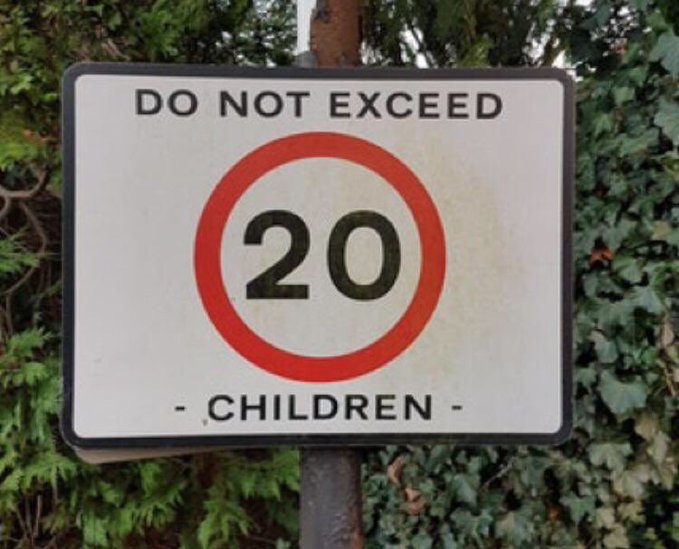 You have to make it so you enjoy your job. 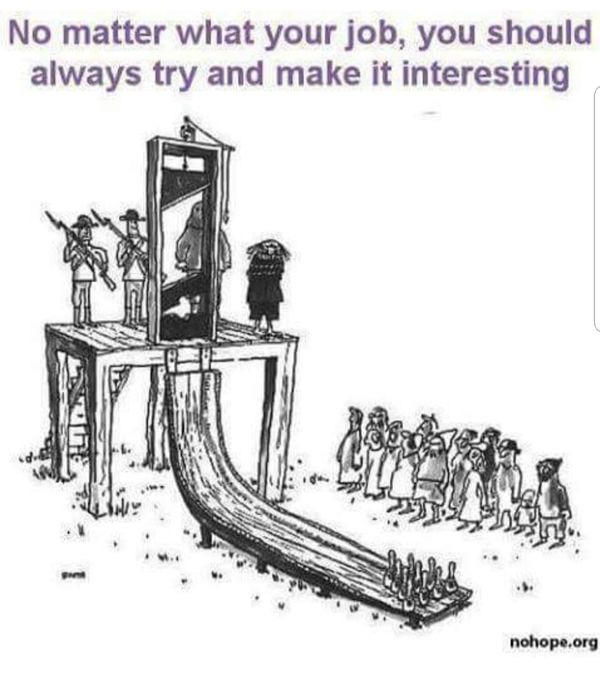 We need this app too…anybody know where to find one?